It takes some doing to win me over on a particular mechanic or (more often than not) particularly popular trend in contemporary gaming. Roguelikes and procedurally-generated environments have never really ridden high on my “like” list; only the very special kind of game convinces me, if temporarily, that such a concept or chosen element can indeed work, but entertain wholesale. It’s been a while since I played a pure-survival game, put it that way. Fitting then, in reflection, that at the center of Team17’s booth at GDC this year — behind closed doors and away from hands-on play unfortunately — was an upcoming title, though pre-alpha in state it may be, has quickly garnered my full attention for these very reasons. Neither chameleon nor bat in sight.

Genesis Alpha One (to give it its full proper name) by Germany-based developers Radiation Blue, from the early footage I was thoroughly guided through in my hands-off time, already looks like a promising start to a game investing so much in its resources yet above all else is making sure not to feel or even look oversaturated because of it. But to carve out an experience that borrows from not just a fair few genres of gaming, but genres that, on paper, are wildly contrasting from one another, is but an ounce of the potential Genesis has so clearly, already, struck with considerable awe in my mind’s eye. You’ve got your RTS base-building, your first-person shooting, your procedurally-generated Roguelike ventures, even a sprinkling of RPG leveling-up from time to time. Often when you combine too many genres, or be it too many popular trends currently making the rounds in contemporary gaming, it ends up with a title far too muddled to feel coherent while at the same time offering so little in end delivery, the result is more a mishmash of half-attempts and barely realized end goals, than anything else. 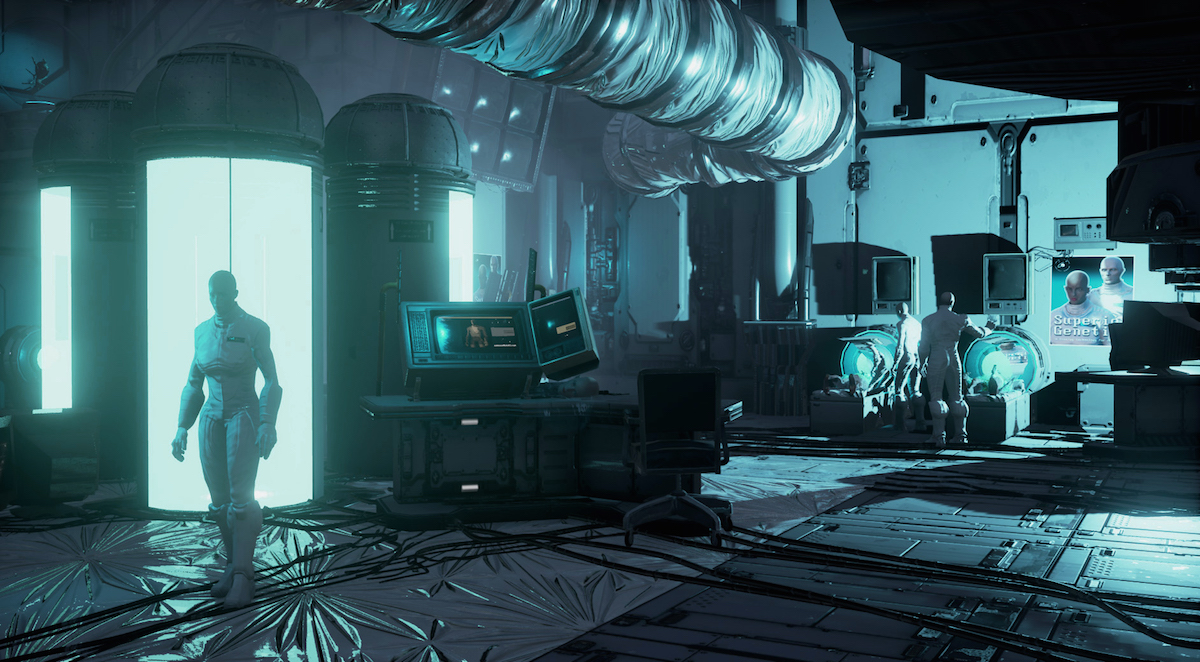 Yet for whatever reason, even with its simple geometry and relatively inactive periods a pre-Alpha state often delivers, Genesis already feels complete. Radiation Blue’s means of weaving each of these genres into one another — rather than having them rub shoulders, fighting tooth-and-nail for supremacy — fits nicely into the premise of the game itself, both as a backdrop and, more importantly, as a means for player interaction. Genesis Alpha One takes place in the near future whereupon humanity as we know it has been ravaged by wars spun by corrupt regimes and global capitalism to the point that it’s caused (as you would expect) our beloved Earth to fall into a rather unpleasant state. Enter the Genesis program: a trans-humanist project of sorts in which your objective is to journey outward beyond the reaches of our solar system into space to keep the human race from going extinct. Even if it means splicing ourselves, at the DNA level, with other races to create hybrid civilizations that can both adapt and survive the cosmic unknown.

Taking the role of Captain on-board one of these Genesis ships, your job is to manage, command but also expand your premises as you explore the game’s procedurally-generated Universe to not only gather resources and counteract incoming threats — be they alien or human alike — but as you might have guessed, also clone and create entirely new branches of humanity to help expand your crew. You may have read the very literal ordering of words that was “procedurally-generated Universe” there and instinctively had horrid flashbacks to June of last year. Yes, you will gather resources and chart numerous courses to planets of varying tolerable/intolerable properties, but Genesis is so much more than just mindless exploration. For one, there’s an underlining purpose: the need, the will to survive. Something, ironic as it may seem, survival games often get so very wrong — mistaking nagging life-bars for some sort of genuine article.

Whether it be the plethora of activities to invest in that are all equally crucial to one’s expansion — the structure of your ship, the upgrading of your assets, experimenting with eugenics in the cloning/growing facilities — or the constant need to think strategically about where you go and how you approach each and every corner-turning scenario, Radiation Blue’s latest project deserves attention not solely on the amount of content being offered,  but how said content almost always finds a way to keep things feeling fresh, feeling frantic but above all else, engaging. As I discovered and watched with startled surprise, it’s the way the aforementioned assortment of genres and play-styles weave and blend together so well to ring home the very idea that you…and only you…are solely responsible for the rise and even demise of your ship.

Granted, the AI-controlled NPCs that are your crew will help when, say, a pirate vessel attempts to steal valuable resources from you or when an alien infestation soon begins to ravage your ship — requiring an immediate eradication of any and all sources of such Xenomorph-like hostility — but not only does Genesis require the player to be on their toes at all times, but imperative also that all aspects of the ship, literally, are checked over for any potential anomaly that could later snowball into disaster. Case in point, the way players can go from idly lounging in the recreational to desperately clearing out a hive of a newly-hatched eggs amidst the ventilation of your ship demonstrates how wildly one given situation in Genesis can shift so dramatically. While the game’s FPS systems aren’t overly in-depth, the way players can so easily shift from an RTS mind-set to a shooter one is not only impressive, but commendable given the assortment of items, weaponry and upgrades offered to the player to take on a similar plethora of potential problems and scenarios. 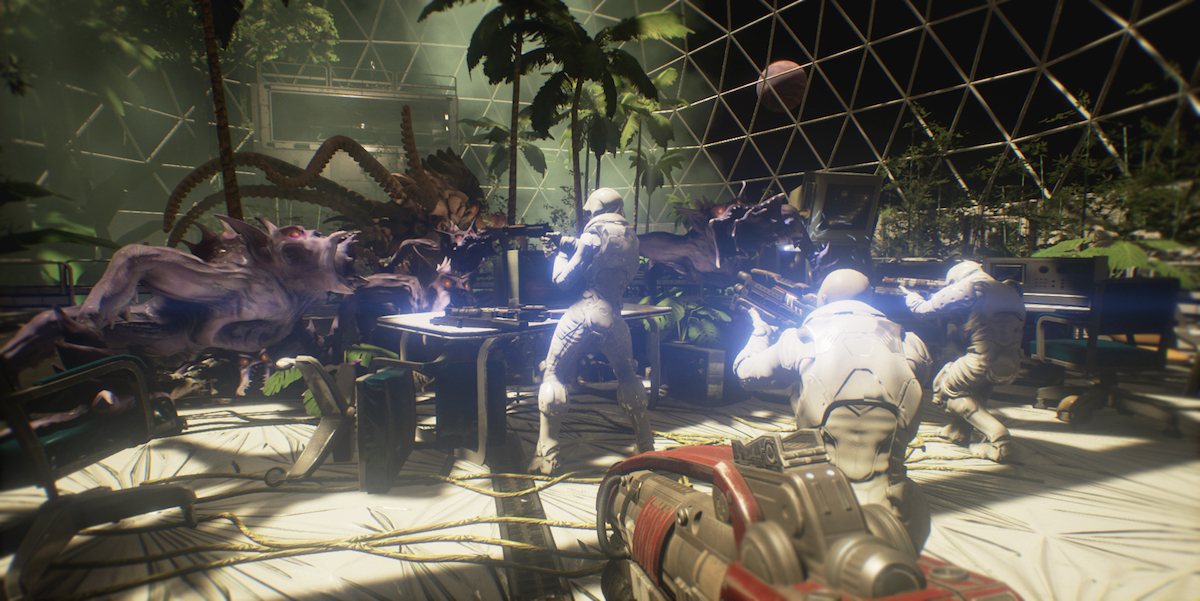 To reiterate, the game asks of you to take to the role of captain of a ship with intent as much enjoyment: requiring you to think immediately but also logically in pacifying threats as well as managing the limited resources at your disposal. Another poignant example: the fact that acquired resources can come back with deadly foreign bodies — some blatantly obvious to spot, some not-so, requiring a bit of make-shift detective work on closer inspection on, say, your crew’s behaviors should they fall ill to some unidentified virus — means the player can’t ever fall idle in a less-than-idle Universe filled with opportunity sure, but never shy at throwing a potentially-costly spanner, from hurtling asteroids to carnivorous aliens alike, in the works. All of which occurs within a fair, consistent rhythm and time-frame that allows plenty of time to prepare and react…but seldom offers respite or second chances for those not fit for the role of captain. A mountainous and perhaps cold means of presenting challenge you might think, but that’s exactly why Radiation Blue look to have hit the nail on the head (least from this preview build alone) in figuring out how the atypical, plentiful and perhaps fatiguing “survival” genre can be much improved upon.

This isn’t one of those games that doesn’t yield in dictating certain procedures and rules one has to abide to, but neither is it something so abstractedly loose that it offers the bare minimum and forces the player along with his/her imagination to fill in the gaps. From its retro-80s sci-fi aesthetic to its simplified layout to its fluid transitioning to and fro genre playstyles, to say Genesis Alpha One is intriguing would be an understatement. Its transformative approach to combining strategy, role-playing, simulation and even conventional shooting epitomizes a developer clearly doing their best to flesh out a game world while still procedural, is no less purposeful with its strict set of rules. Even if one were to look at it from a purely comical and perhaps immature perspective, on eagerly wanting to splice human DNA with…maybe…some ugly/uglier monstrosity one discovers…even this only goes to broaden Genesis’ appeal as a game that has the potential to draw in so many audiences, delight them as a result, but more promisingly, open them up at the same time to new genres they never even dared tackle. Team17 may have struck [cosmic] gold here; Genesis Alpha One is looking very good indeed.