Meat Boy used to know how to stop but he and Bandage Girl have a kid now, so those days are over. When Professor Fetus kidnaps Nugget the parents drop everything to give chase, but just like the last time the Meat family flew into action there’s a few million levels between them and a happy reunion, and this time the challenges are randomized. Meat Boy and Bandage Girl can’t stop won’t stop, though and that’s fairly literal because they’re constantly running, slowing down only to jump, slide, and punch or kick through anything in their path.

There’s a lot going on under the hood of Super Meat Boy Forever.  It’s got features of an endless runner, except the levels have a clear end point.  It’s randomly generated, except built from hand-built parts.  The occasional enemy floating through the level is happy to kill you, but as often as not it’s also a great way to use an attack to gain extra distance on a long jump. Every negative has a positive, which means the levels can be as deeply cruel as series fans could hope for. 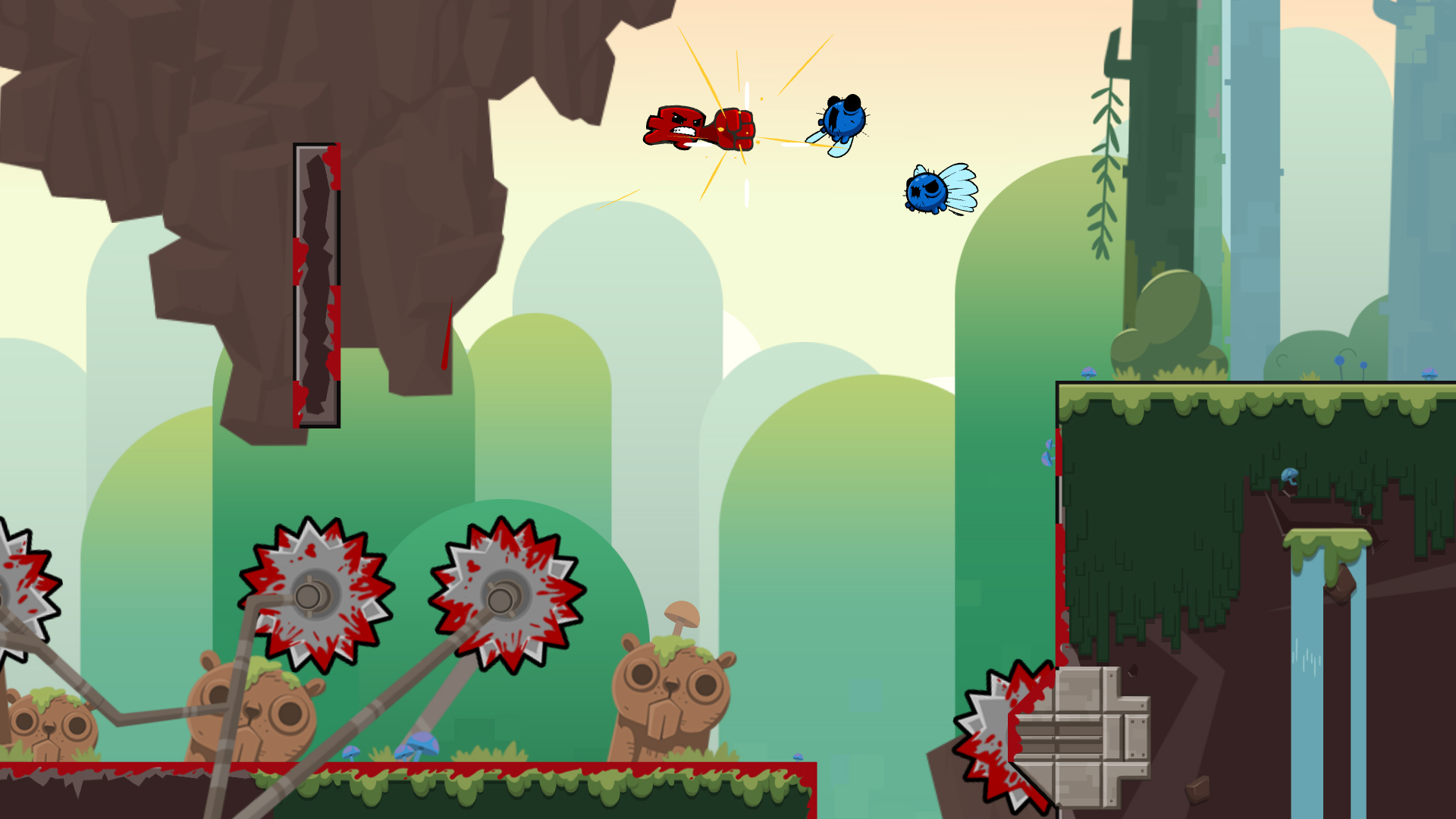 Meat Boy and Bandage Girl have as strong a jump as ever, but now they’re tougher and can attack instead of merely hoping not to get hit.  True, if you jump into a their oldest, cruelest foe, the sawblade, they instantly go splat, but other environmental hazards like glass shards can now be tolerated for a couple of seconds before death.  Each level-chunk is precisely built to work with Meat Boy’s abilities, and if it takes a bit of figuring out that’s why restarts are instant and checkpoints generous.  It doesn’t take long to get the feel for Meat Boy’s handling, and once you do you’ll start feeling like a two-button wizard.

Possibly the biggest change from Super Meat Boy to Super Meat Boy Forever is that it’s now a two-button game.  Running is automatic, so there’s the X and Down buttons to control everything.  X once is jump, and X again mid-air is a dash with fist extended to punch anything in the way that’s not an insta-kill.  The down button is for sliding or a quick drop from a jump, again with fist extended.  It’s not that Meat Boy needs to hit all that many critters crawling or flying through the levels, but rather with only two buttons there’s a need to concentrate as many moves as possible into what’s available. 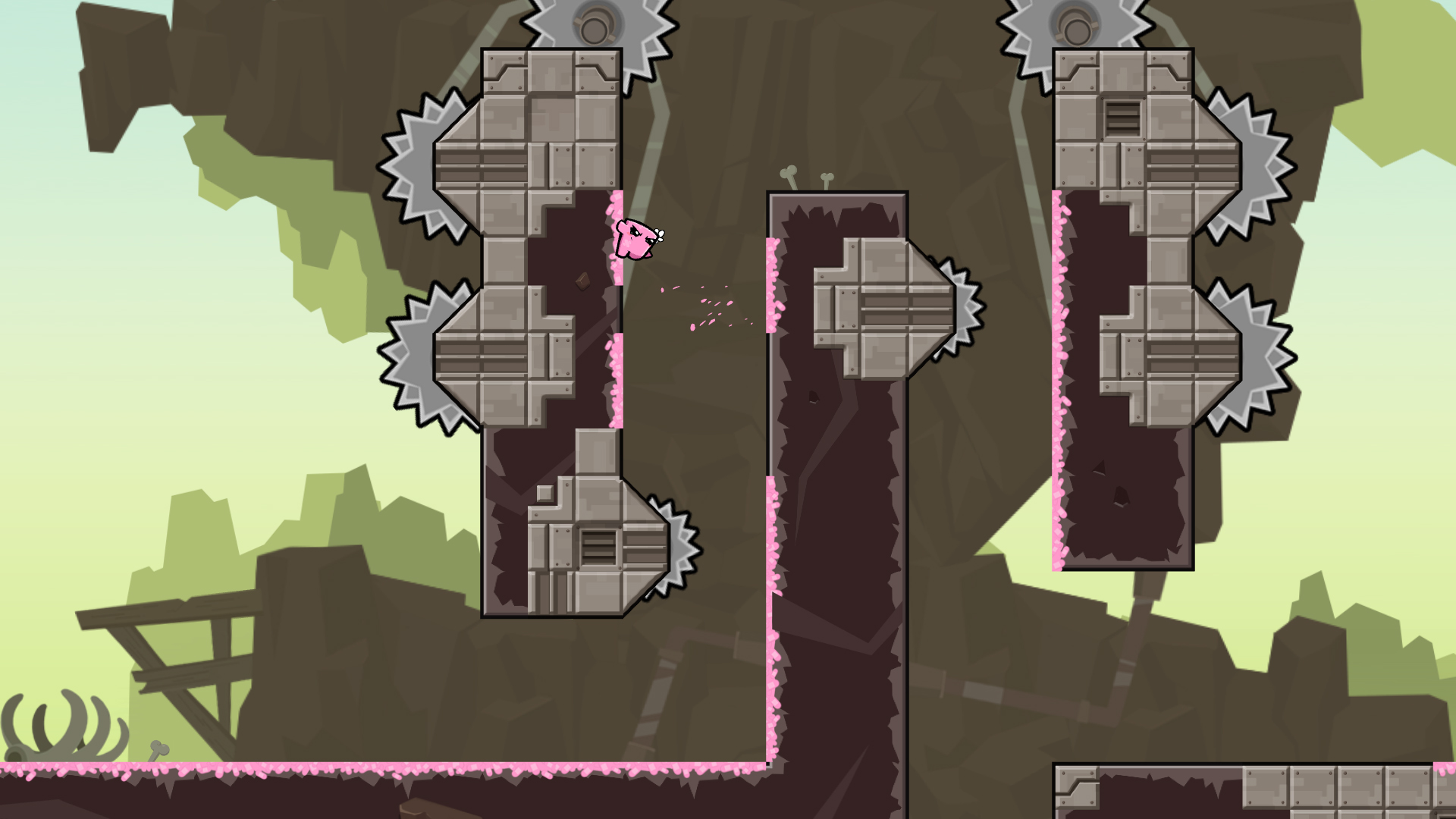 My demo time with Super Meat Boy Forever revealed a game that’s easily turning into a worthy sequel, even with all the differences between the two games.  The art has had a nice upgrade (and Meat Boy has been to the dentist to get that tooth fixed) and the levels are much bigger than before, but it’s easy to go from playing the original to its sequel and back again.  The simple controls by no means mean an easy game, and in fact it can be harder thanks to the instant accessibility of two-button setup.  Each level has multiple difficulty challenges, with the ones available to test being Hard, Mean, and Cruel. That last one was no joke, cluttering up the levels with more ways to die than seemed possible, and it only got worse when heading over to the harder versions in the Dark World.  Plain-vanilla Hard, however, felt like an approachable challenge, reasonable but still demanding the player figure out a clean path while painting the sawblades red with repeated failure.  Getting through felt like pure meat-ninja action, though, fast and responsive and deeply precise.  There’s going to be a lot of dead Meat Boys and Bandage Girls on the way to saving their baby, but the successful runs through levels packed with razor-sharp spinning death will make all that suffering worthwhile.