To think there was once a time in video games where the ability to choose between scan-line and CRT filters would be met with baffled glances. Why on Earth would you want to replicate that? Why would you want to take that suggestion of nostalgia that one step further? Well, now that we live in the age of micro-consoles and resurgent arcade cabinets, taking nostalgia to the next level doesn’t seem all that odd nowadays. What better proof of formerly-aged archetypes seeing a resurgent return than the 90’s brand of FPS. The particular kind of three-dimensional, ultra-violent antics that spoke to the kind of people whose love for the original DOOM is far from swayed by the limitations of its graphics or the polygonal jaggedness of its visuals. It’s that same jaggedness, that unapologetically lower poly-count, that ironically makes these types of throwback releases stand out. In the wake of such effective releases like Dusk in what may be deemed the post-2016 DOOM period, it’s clear that like a lot of old favorites making a remarkable return, the market never died.

If anything, the “less is more” demand in the aesthetic department never went away. Liberties with fidelity and artistic direction are common staples of the independent corner of the industry, but up until a few years ago, the idea of a pixel-heavy, low-resolution shooter that something like Prodeus presents would’ve seemed like nostalgic appeasement taken a step too far. In a way, you can’t help but involuntarily cling to the idea that it won’t work. That the blatantly-visible pixels on-screen and a return to a level design philosophy that favored hunting down multi-colored key cards would indeed be a relic of the past. Times have changed, advancements have been made. It surely isn’t as satisfying to do all this back-tracking, bunny-hopping and secret room-hunting now as it was all those years ago, right? Wrong. While they may not be the first to attempt it (and I guarantee they won’t be the last, if this trend continues to prove fruitful), developer Bounding Box Software have nailed the basics on why these kinds of games are, at their most mindless, a joy to invest brief excursions of time into.

Prodeus may not be winning any awards on its unique premise of a[nother] demonic sci-fi abode or sense of having to mow down room after room of inhuman beasties with a wide assortment of pixelated weapons. In a sub-genre that has long been tied to the over-zealous allure of guns, blood and violence, Prodeus arrives at this particular party well-dressed and well-versed in the trade. But that’s no bad thing; it’s surprising how many times you can be caught off-guard by an enemy standing directly behind a door you’ve just opened and despite it not an original idea, it’s still a pleasant little moment to keep one’s self on your toes. A plentiful number of small moments that add up to reveal that Prodeus’ approach is, fortunately, more than just surface level. Despite the ample blood spatters, key cards to gather and a user interface that has your character’s face bottom-center — further damage obscures your once humanoid look behind a deathly skull-shaped equivalent. 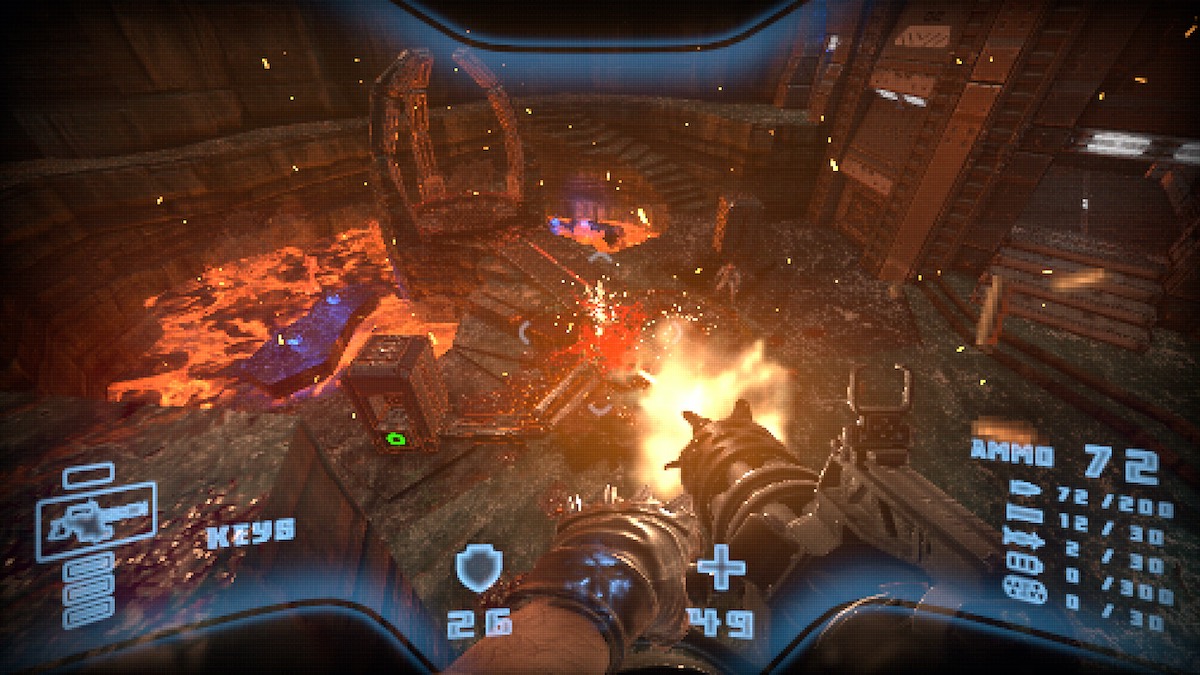 Yes, anyone can immediately draw on where the inspiration is coming from and what Prodeus wants its players to remember. But where other games may wear their influences too tightly on their sleeve, Prodeus’ use of modern-day effects actually gives the game this extra little oddity of straddling between old and new. No better a showcase when you see the glare of light sources bouncing off surfaces to then switch to using your fists for combat and once more, you can literally see the pixels floating above you. Before your screen once more descends into a salvo of blood as you go about beating enemies to a pulp. Prodeus so unapologetically puts great emphasis there inevitably comes the resulting concern that this all may seem a little too satisfied with itself. As if it’s more than confident that it’s hit it out of the park, that people will love it for its mad, senseless pace and liberty at which players can hop from one weapon to the next.

Perhaps the saving grace does indeed lie with the fact the levels are interesting to work out structurally. Even if the 3D map — which displays the surrounding environment in a kind of [even more] stripped-back, shell of interconnected polygons — can at times feel like a struggle just to move around and through. Or, more importantly, Prodeus looks to provide additional objectives that aren’t just “find key cards, get to the goal.” While the closed beta only provided access to three levels, one of these was a time trial-like entrant that has players clearing out a linear course, all while making sure to hit all targets with the weapon provided. And once more, there’s a simple joy in trying to shave off a couple of seconds and then another couple, upon repeated plays, with such modes. Unclear it may be on whether this kind of level is simply an exception — rather than a suggestion of a greater breadth of objectives in the game — the fact that there is at least some variety on show is welcome nonetheless. 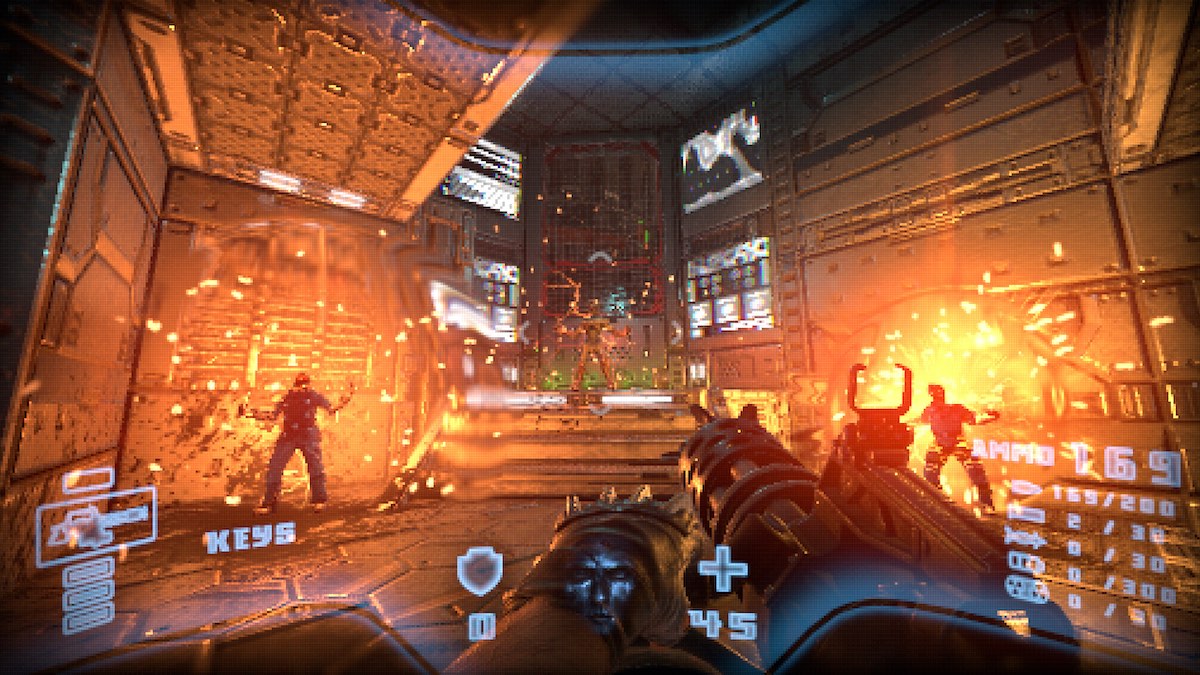 Anyone even taking a quick peak at this style and delivery of shooters may already know of the kind of set-pieces coming their way. That’s not to say that originality or perhaps daring to be different won’t be appreciated, but Bounding Box’s brand of ridiculous, over-the-top 3D shooting, does give the impression of stemming from a love of the genre as opposed to some fleeting copying of what came before. Even if the smaller details are tucked away behind a screen of chunky pixels amplified by current-day visual effects. Maybe it’s that tailored brand of absurdity with its artistic design where Prodeus will find its calling. Beyond the potential of gameplay extending beyond the umpteen facilities or bases to decorate with an enemy’s blood. The heart and soul of simply letting rip unto foes is not lost but Bounding Box’s brand of old-school shooter appeal is manic, frantic and loveably so.