As a general rule, saving the Earth has the requirement that it still be intact.  Whole cities could be wiped out, giant smoking craters can make entire countries uninhabitable, but there should still be a globe to rebuild on.  It’s like breaking a glass in that once shattered that’s it, it’s over.  Giving up is a little too easy for Anew: The Distant Light, which opens with the Earth missing huge chunks from its surface as a spaceship flies away, tearing into the universe on a journey to… do something.  The story promises plenty of mysteries to untangle as a teenaged boy in an oversized spacesuit explores strange otherworldly landscapes straight out of 70s sci-fi book covers, searching for the missing co-pilot of the broken ship that’s his only chance of not dying alone light-years from Earth.

Anew: The Distant Light is a Metroidvania-style adventure set in an alien solar system and the situation starts off fairly bleak.  It seems like the fate of the Earth has already been completed and yet the unnamed boy is supposed to have a chance to save it anyway.  He was only a baby when the ship left his home planet, and while the intro doesn’t provide much information about the journey’s intervening years, he seems to be aware enough of things to chase after the missing co-pilot.  Staggering out of the cryo-sleep chamber he crawls into a machine that wraps him a life-sustaining spacesuit, at which point the clawed-open second chamber with the red “Find me” note sets him to action.  Which, seeing as he’s got very little to start with, involves exploring the spaceship to find some useful gear.  The bugs on the second floor are a little too big and dangerous to simply squish, but thankfully the one non-locked area of the ship has a handy space-machine-gun available.  The bullets easily tear through bugs and the green crystalline residue they leave behind to block passages, so with the basic tools to handle the world outside the ship the young man sets off to see what’s out there. 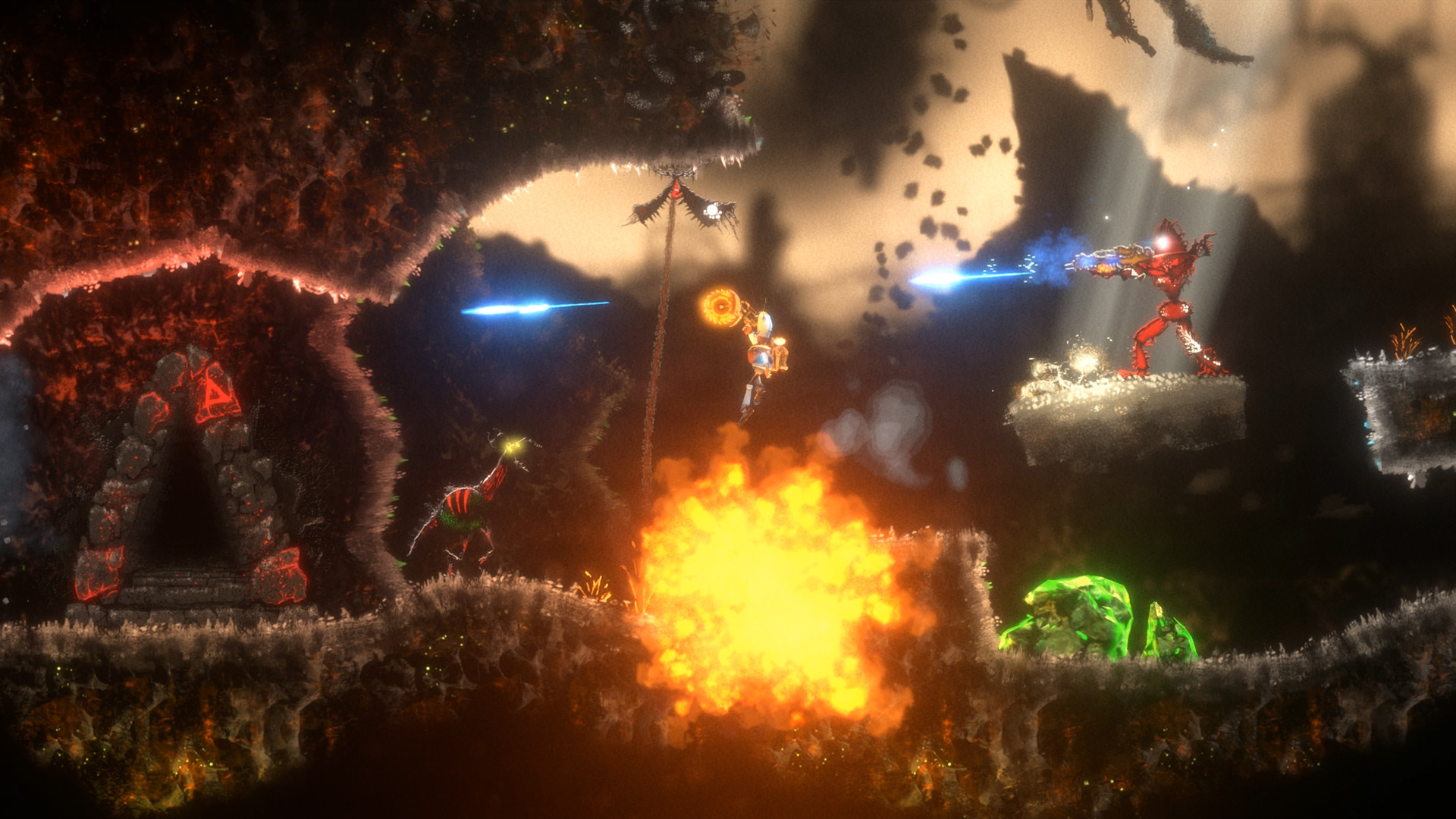 The demo of Anew is designed to show off several aspects of the game, but its free-form exploration isn’t one of them.  It’s a guided tour from one set-piece to another, with each new area introducing a new item and its mechanics before the next scene kicks in.  You can see the demo’s gameplay in full in the video below, from opening cinematic to daring flying saucer escape, but in the final game it will be an open-world series of connected areas instead of a level by level tour.  Once out of the starting area the adventurer earns a shotgun, shield, jetpack, wall-grip gloves and a couple of rides to break up the walking bits.  Certain sub-functions of the tools are left to the player to discover, such as the way the recoil from the shotgun blast acts as a boost when flying with the jetpack, and part of the fun will be figuring out which tools work well together.

While getting new tools is always nice, the rides act as power-spikes to let you blast through the toughest alien critters.  The first vehicle in the demo is a massive robot armed with a mega-laser, perfect for punching through the red-armored enemies whose lasers had been so effective at shaving off large chunks of the health bar.  The robot is slow but insanely powerful, clomping along at a leisurely pace because it’s not like anything can hurt it.  Stopping it dead in its tracks, on the other hand, is no more complicated than putting up a wall it can’t step over.  The other vehicle is an armored car, much zippier and able to multi-fire a barrage of homing missiles.  It’s a bit unstable, flipping over if you go too heavy on the gas or hit an obstacle badly, but its section in the demo felt good enough that I’m hoping to see at least a few more good-sized areas using it. 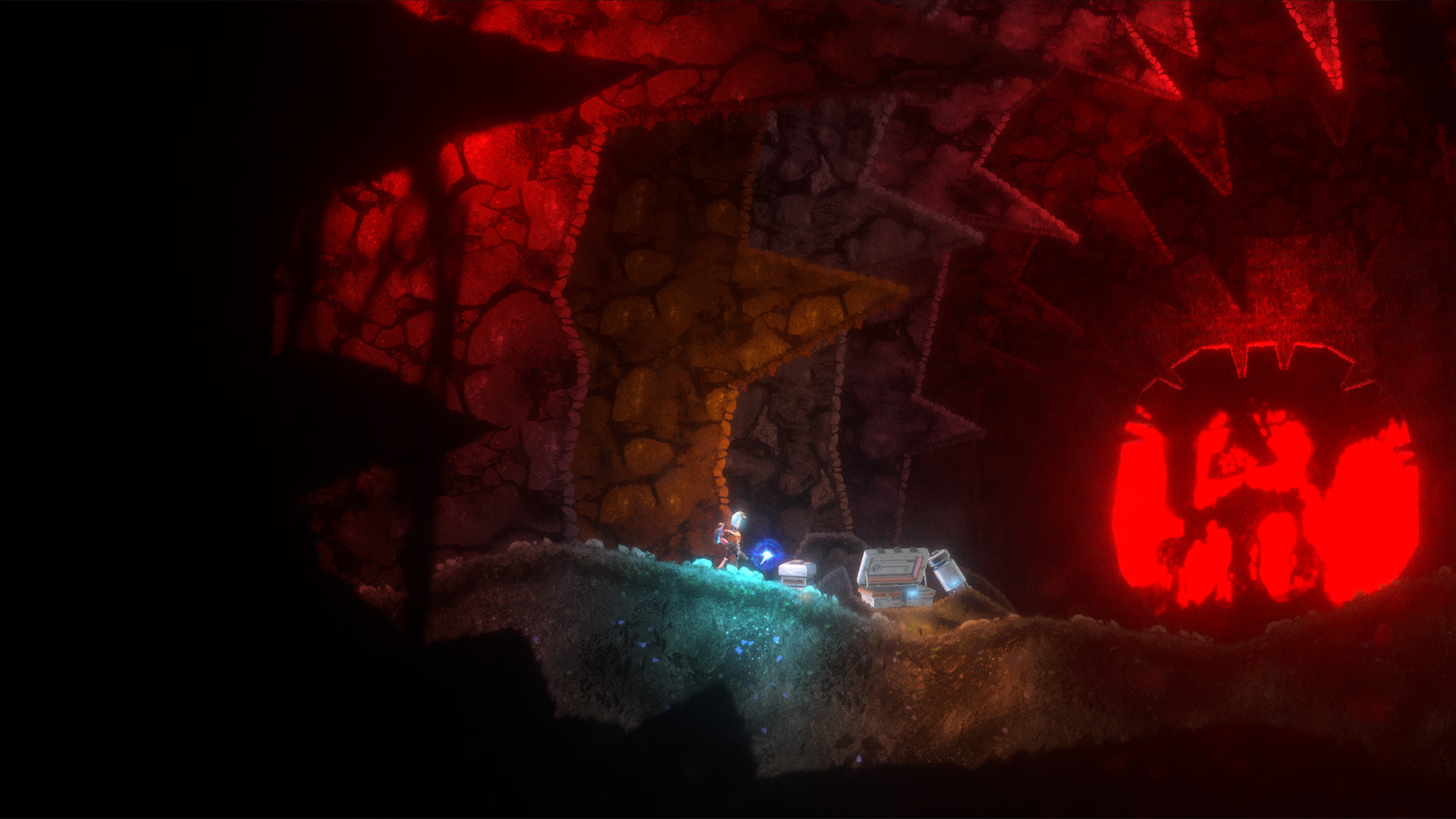 While a promising little slice of game, there are a number of things left to show off that are barely even hinted at in the demo.  The white spheres that home in on the player will be used to repair and upgrade items, the home ship uses the seed core received at the end of the video to open up locked down areas, there will be many more weapons and suit upgrades, and of course the story is only hinted at.  One of the storytelling focuses is that it’s being told wordlessly, primarily through environmental clues but occasionally stopping the action for a brief cut-scene.   The game is already planned to be big enough that it doesn’t need to get in the way of the player progressing, with plenty of bonus areas, secrets and even a speedrun mode for extra replayability.  Anew: The Distant Light is aiming towards being a major new free-roaming action adventure with a unique art style and epic scope, with a ruined Earth that still hopes to be saved by whatever may be found in the strange sci-fi worlds of a distant star too many light years from home.