A general belief I like to live by in most situations is the idea that there’s no such thing as coincidence. Or that a vast majority of occurrences simply happen by accident. Luck, sure — good or otherwise. But to assume so easily that nine times out of ten, there’s no reason, no purpose, no motif in fact for what may be two eerily-timed incidents? Obviously in holding that view, one must of course follow on that same trail of logic and tackle the inevitable flip-side. The odd one out of ten hypotheticals. The one that ends up genuinely innocent in its otherwise uncanny timing or nature. And WRC 10‘s arrival, the tenth entry in the official World Rally Championship series — the first to see that numeric value reach double-figures — fits that bill. Even if its coinciding with the real-life WRC’s 50th anniversary itself seems on paper to be a little too perfectly-timed. 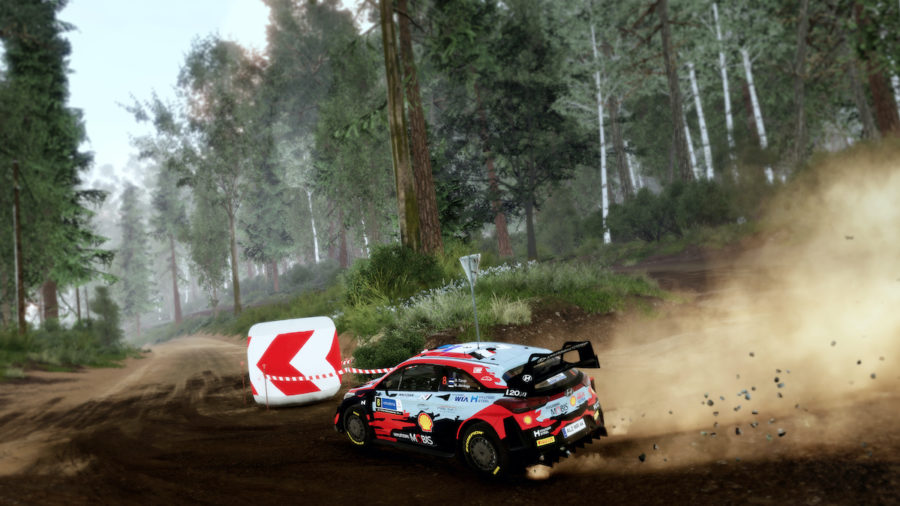 But developer KT Racing’s work with the series is deserving of having reached that milestone. Not that I haven’t already reiterated this in past reviews and previews alike in years past, WRC has only gone from strength to strength, not least during the mid-to-late eighth generation of consoles, where visual fidelity and environmental detail may not exactly have the prowess to bolster the series’ grounded and ruthless take on rally driving. Even at its least-innovative KT haven’t dished a “bad” vision on what WRC’s grit and genuine challenge should look like in video game form. The result has been splendid; if one were to be more critical, last year’s outing was more an affirmation that WRC had indeed broken from out its hyper-niche confine. A racing series that could be enjoyed by all bases, providing you were happy with a tough less or six along the way. So then, if there’s a valid-enough confidence that KT can work mechanical, dexterous wonders into their many snaking, winding, perilous courses, surely an anniversary-styled looking back on WRC’s history feels like the perfect opportunity to draw from this sport’s treasured past. If WRC 10 is unlikely to dazzle [as superbly] as the surprisingly-expanded WRC 8 managed, the answer surely lies in its past, right?

As much as this would be the point where I dive into WRC 10‘s small sampling of historical snippets, the reality is that I’m coming away from this preview a touch baffled. Baffled not by its gameplay of course; WRC 10 is still aggravatingly joyous with its house of cards-like stacking subtle little physics atop perilous ounces of collision detection. One small, ill-advised move and what good fortune you’ve made for yourself in that current run comes crashing down. Or rather crashing into the fields. WRC 10 retains that engaging, enraging, emergence of play and it’s surprisingly capable of balancing both extremes of the emotional spectrum into a tantalizing guessing-game of when and where not to apply such things as the hand-brake or even just an extra bit of acceleration. But we’ve experienced all these same high’s (and low’s) before. And I don’t mean that in a snarky “well, all sports games are literally the same every year, hardy-ha-ha” kind of way. 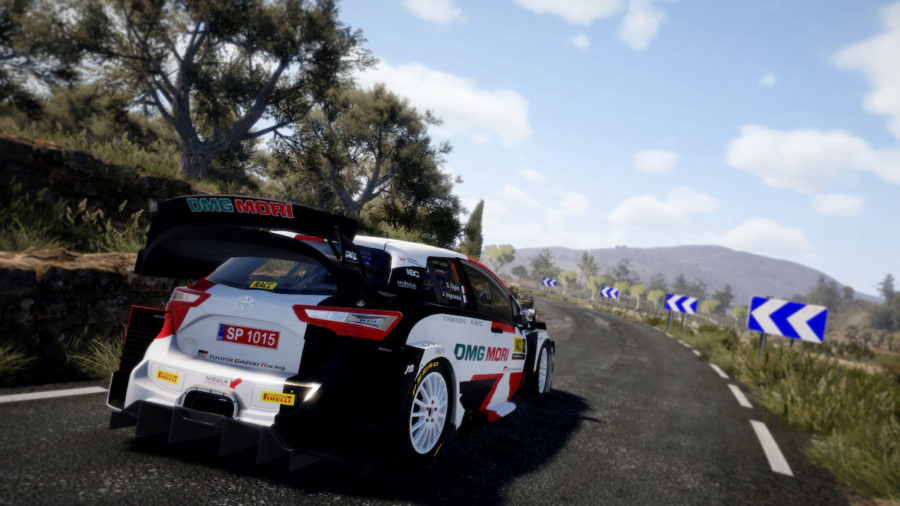 The pedigree is already there. We know that; KT can rest easy knowing that we’ve acknowledged their ability at developing games in this sub-genre. But as I’ve said, to be restricted during one’s time to a mere three courses — two variants each — with all the added weather and time-of-day options that adorn it, I’m eager for what’s been added. And you’ll forgive me for coming into WRC 10 expecting that the focus on “anniversary” would’ve at least offered a sneak-peak as to what this year’s entry has in store. Interesting it sounds on paper: “relive the most intense moments of the Championship, from 1973 to the present day” it boasts. “A retrospective mode offers players the chance to relive 19 events that have shaped the history of the Championship. These challenging special stages put drivers’ skills to the test by imposing conditions specific to each era.” Yes, wonderful and I’m all for an annual sports series that finds a way to broaden and expand upon its gameplay base, not least when the prospect of an anniversary comes around. And yet such modes, such events, were inaccessible on the build I had access to.

Instead, WRC 10‘s impressions turn to the increasingly-tweaked handling of cars. The many moving, clashing, contentious components governing one’s grip, speed, control, tyres. The crash detail and fine sound design are all here and working wonders with one’s focus, as they have so often done. Except with 10, I can’t help but feel that something seems a little off. Whether it’s how much more challenging maintaining the rear of a car is even on straights, or how a wet track has a lot more in common — and as much traction at times — with snow/ice-laden courses. Then there’s general performance snags for those playing this on PC, with the screen blinking erratically upon course start-up for anyone who dares venture into the Video settings, as well as some occasional frame-rate dips at the most crucial of moments. Scratch that, at what point, playing through any WRC course, is it ever not? To put it another way: WRC 10 comes across as tweaked for the mere sake of it. It’s hard, at least after a handful of time-trials, to see if this is a snug fit. It’s one thing to fine-tune and give each of your little back-end mechanics that extra jostling for dominance, but there comes a point when that challenge to maintain control, stops being fun. WRC 10 (or what little has been on offer) is still fun. An entertaining rattling-off of combos that use acceleration/break/hand-break to grapple with. More it’s the case that at this early phase I’m not entirely convinced that the adjustments to traction are as beneficial as the series’ past jumps in quality. Satisfying it is to hear the rubber of one’s tyres or the roar of the engine struggling against the asphalt and the off-road dirt alike. 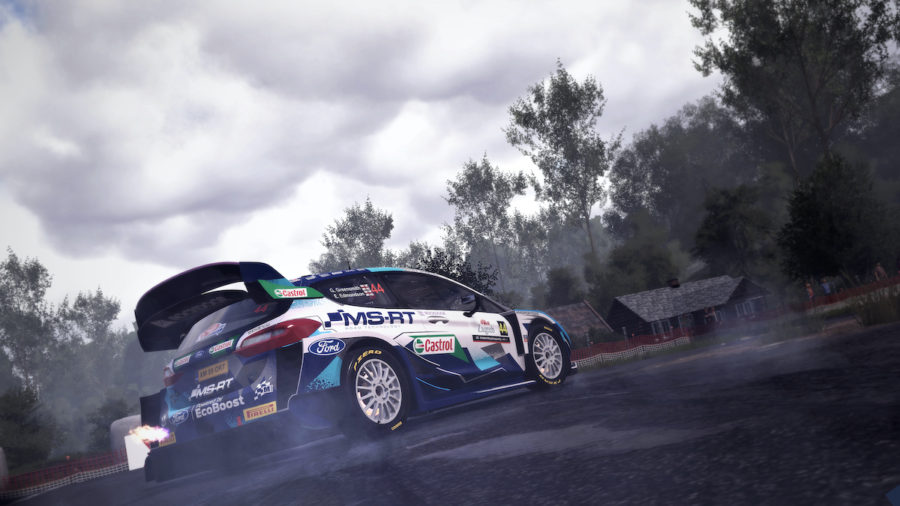 Perhaps KT Racing are hoping that the complex, anxiety-ridden car-management that most of these games revolve around can see this year’s release through. You could apply that logic to last year’s game — conceding that sure, there was sufficient reason to refine what good came before. But to end this article with an idiom: lightning doesn’t strike twice. Enjoyable these tracks still are — richly satisfying it is to see your rally car perform that perfect hair-pin turn or lengthy slide around a corner perched atop a raised slope — WRC 10 feels like it needs just that little bit more of a push to prove we haven’t found the series’ incremental progression land at a plateau of sorts. Confident as I am that the improved RPG-like team management, career mode and lest we forget, celebrator delving into the Championship’s fifty-year history, will materialize to help WRC 10 stand out on the rudimentary content side, I’d be lying if I said this year’s entry couldn’t very well reverse that upward trend, as much as it could add to it. WRC deserves that celebration for what it’s achieved in these past few years alone, so let’s hope the full game can deliver.