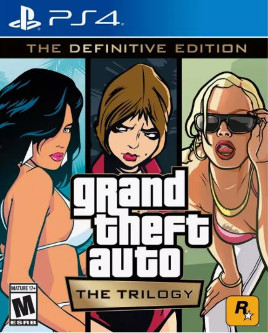 Grand Theft Auto has been around since the ’90s with a couple games that were considered mediocre at best. That would change when Grand Theft Auto III was released and almost instantly became known more for supposedly glorifying crime and immoral behavior than anything else. This was likely the biggest anti-video game crusade since Mortal Kombat. Criticisms about its content weren’t entirely without merit. The game does have the player carry out numerous criminal activities while being heavily involved with organized crime. Prostitutes recover the player’s health, and the player can kill them afterwards to get some of their money back. There’s a lot of open world freedom, where the player can go on a killing spree for fun and continue the gun battles when police, FBI and military try to quell the carnage.

Despite the subject matter, Grand Theft Auto III was an incredible game from just about any objective measure, so the controversy did nothing but give it free press and put it on people’s radar who might otherwise have passed on it. There have been several equally successful and controversial sequels and it even created some copycat games as the first two Saints Row games were blatant Grand Theft Auto copies. Before that PlayStation 2 console generation came to an end two more games were released, Grand Theft Auto: Vice City and Grand Theft Auto: San Andreas. All three of them were top-tier quality during their generation. The trilogy reviled by the PMRC and Jack Thompson has been given new life on modern platforms with Grand Theft Auto: The Trilogy – Definitive Edition. But like most titles of previous generations, does revolutionary gameplay from 15-20 years ago still hold up?

The graphics in all three games have been upgraded to mixed results. Claude in Grand Theft Auto III looks like he actually has a personality now (he still doesn’t), but Tommy from Vice City looks too young. Some of the NPC character models look like horrible mutant abominations. Some of that may be from using 3D models from the turn of the century, but regardless being polished products of antiquated graphics technology make some of their faces nightmare fuel. Overall the HD remaster and treatment is an improvement, but there are still quite a few visual glitches that we had hoped would be ironed out. Sometimes dead bodies are suspended in midair like a post mortem freeze mob that sometimes include car parts with doors and fenders remaining suspended in midair. Arms sometimes morph into noodley blobs and faces distort in ways like the Ark of the Covenant melting the T-1000. Sometimes lighting effects make things too dark and rain can reduce visibility to almost nothing, especially in San Andreas. 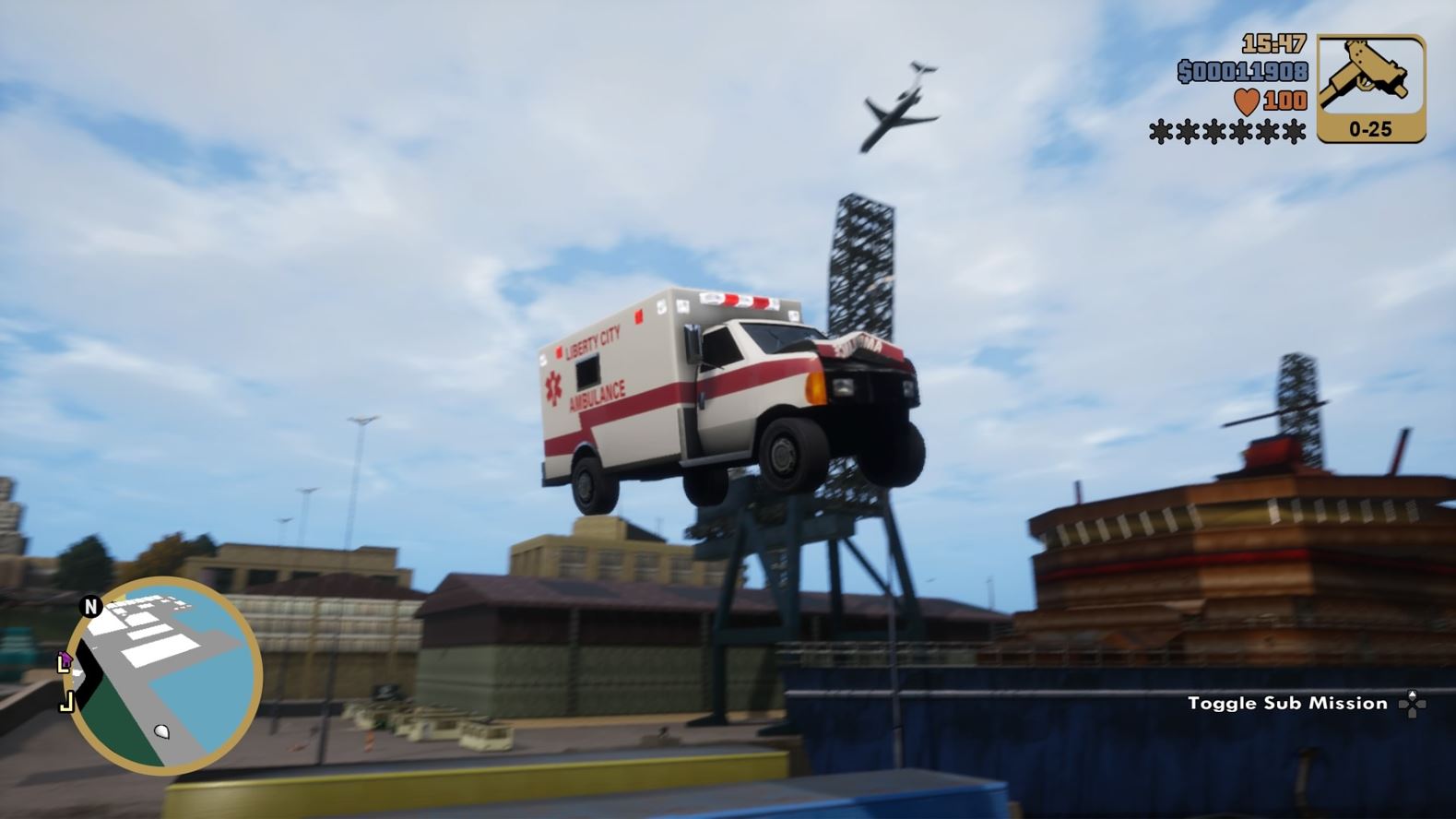 The gameplay of each game remains largely the same with a few improvements. Opening the weapon wheel slows time down to a crawl allowing the player to swap weapons in the heat of combat without being turned into Swiss cheese. Mission failure is much more forgiving with an added checkpoint system, allowing the player to restart a failed mission right away. This is especially beneficial in cases where the mission is failed due to getting busted or wasted as the player not only doesn’t have to travel back to the mission start point, but also gets to keep all their weapons. Gunplay has improved a lot with a new aiming system, which is a big improvement over the previous non-existent aiming system outside of assault and sniper rifles. This has the unintended consequence of making gun battles a lot of easier, but that isn’t a bad thing since a lot of the previous difficulty was the result of the character haphazardly shooting everywhere.

Grand Theft Auto III is the franchise’s first foray into 3D and mainstream controversy. The player controls silent protagonist Claude who is freed from an attack on a police convey to prison, after he was shot and left for dead after a heist. After finding a safehouse to lay low, he begins taking small jobs from organized crime syndicates as he plots his revenge against those who betrayed him. As is the case with all games in this collection, there’s a main story to follow that can be completed at your leisure. You can also take on various side work as a freelance ambulance driver, firefighter, police officer and taxi driver. You can also explore the city freely and start a war with law enforcement and rival gangs pretty much whenever you want. Compared to the other two titles it’s on the more basic side, but at the time of its original release was a revolutionary and influential title. 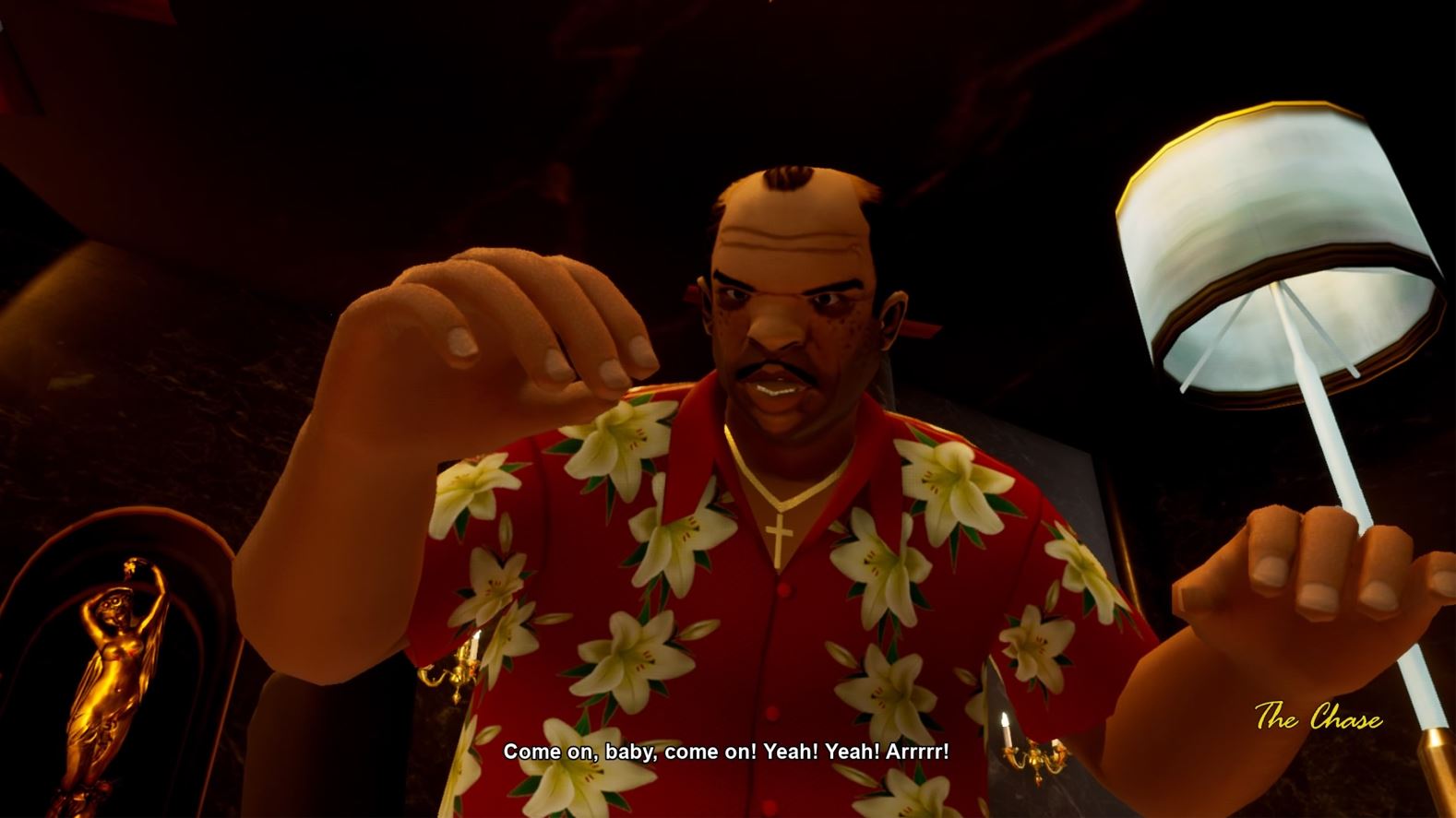 Grand Theft Auto: Vice City has the players step into the shoes of Tommy Vercetti, finally back on the streets and into the organized crime game after serving fifteen years. Set in the 1980s, Tommy is sent off to the neon-saturated Vice City. Vice City uses its predecessor as a template, but improves on it in just about every way. Tommy actually has a personality and is voiced by Ray Liotta, known for his role in Goodfellas. To further expand on things, Tommy is able to purchase multiple safehouses and there’s a much greater variety of weapons to acquire. A new vehicle type, motorcycles and scooters have been added. The motorcycles in particular are a fun way to get around the island. The only licensed music in Grand Theft Auto III was on one radio station and it was all from the Scarface soundtrack, but Vice City is filled with tons of music that was actually popular in the ’80s.

Grand Theft Auto: San Andreas takes all the improvements from Vice City and adds bicycles. San Andreas takes place in the ’90s and draws inspiration from films like Boyz in the Hood and Menace II Society. The player takes on the role of Carl Johnson, returning to San Andreas to bury his mom after spending five years in Liberty City. CJ was staying on the straight and narrow but it doesn’t take before a run in with crooked cops and reconnecting with his Grove Street homies gets him back in the gang world. San Andreas added a lot of content to the GTA formula. CJ can change his clothes, hairstyle and get tattoos. He also has to worry about eating food to survive, and like real people he can get fat if he overeats or he can get jacked if he spends a lot of time at the gym. San Andreas is much bigger than the areas in the previous games and a new mechanic is factored in for the gang turf wars as CJ needs to have Grove Street control as much territory as possible. 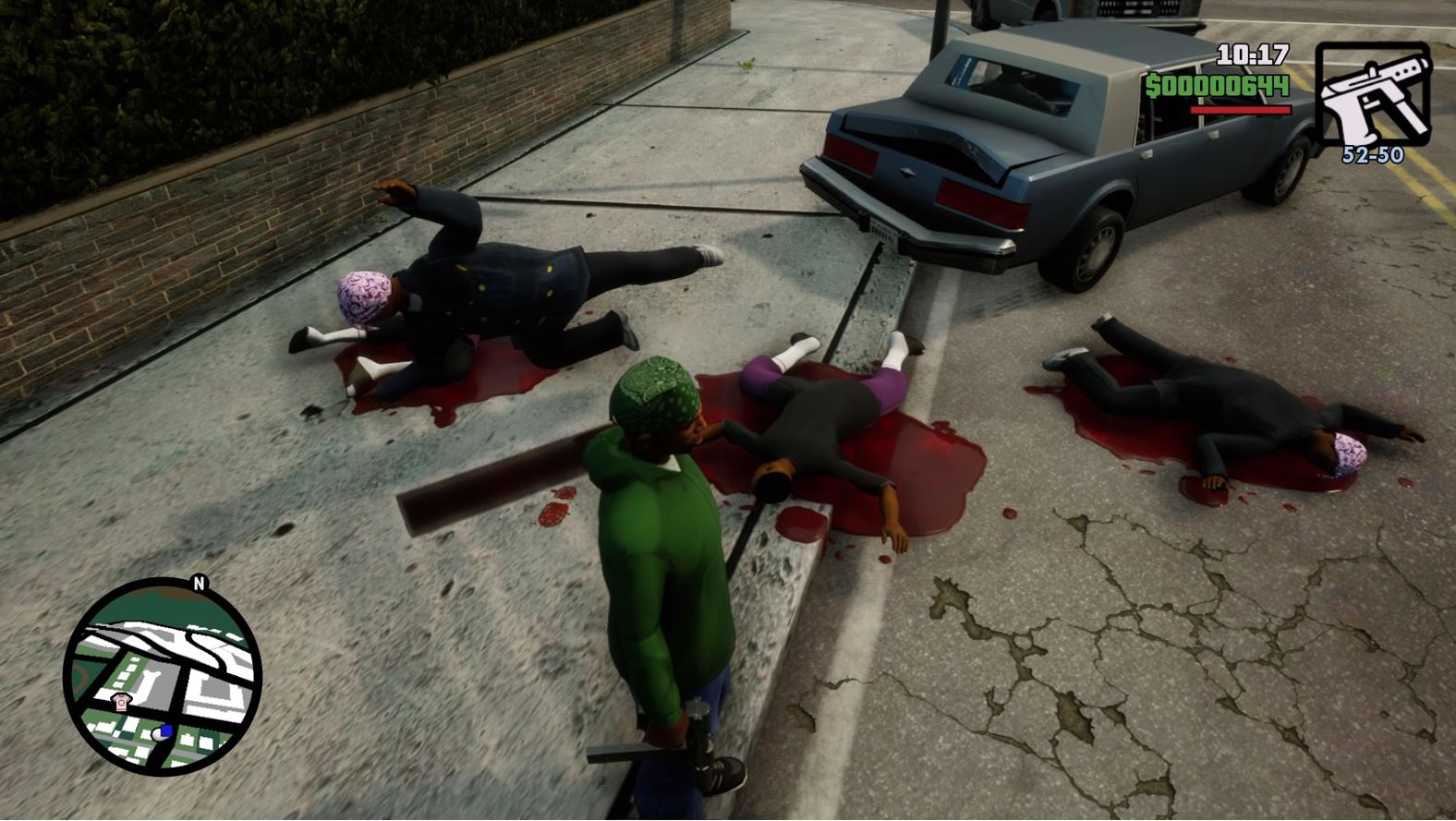 As we get into the nostalgia rabbit hole, it seems that not all is as we remember. The talk radio stations remain intact as do most of the playlist from the music stations. We haven’t seen a definitive list of all the music that was cut, but the playlists appear to be missing a few songs, with Michael Jackson being among the most notably absent. One of the NPCs in Vice City originally wore a shirt with a confederate flag on it. The character in question is a lowlife degenerate, not a role model by any means and if anything associating that symbol with him disparages that flag. Removing the flag from a context that glorifies it would be understandable, but this seems like a weird form of self censorship, especially considering how much other offensive content remains present. As mentioned there are also quite a few visual bugs and the AI hasn’t gotten any smarter since the original release. A few missions had to be restarted because ally NPCs do things like walk off the roofs of tall buildings are run into traffic and die. One of the more bizarre things that happened during the review was in Grand Theft Auto III. A timed mission was completed with seconds to spare. The PlayStation trophy for completing the mission activated, but the clock kept ticking and the mission was failed.

These Grand Theft Auto ports are a bit of a mixed bag. A lot of the graphic textures are improvements, but some of the character models actually look worse, though that might be more of a personal thing. Poor lighting is a problem more often than it should be and the rain textures can obscure visibility too much. The gunplay and aiming is improved a lot, and while some old school fans may say that makes things too easy, challenge from poor aiming controls isn’t the good type of challenge. Visible bugs and glitches happen far too often, and while the shooting controls have been improved, the vehicle controls are still slippery. Missions being failed because NPC AI is stupid is always irritating, but with the new mission checkpoint system the player is allowed to jump right back in mission without losing any progress. Even with the flaws, this Grand Theft Auto trilogy contains some of the best games of its generation. Playing through these games again has been a blast, partly because of remembering how fun going on rampages was with friends, taking turns seeing who can last the longest with a six star wanted level and talking smack to each other about who’s further in the game. And partly because despite being as dated as some of the mechanics are they’re still fun games that hold up well. Unfortunately, with the current state of this collection there isn’t really a reason to get this if you still have access to the original versions. 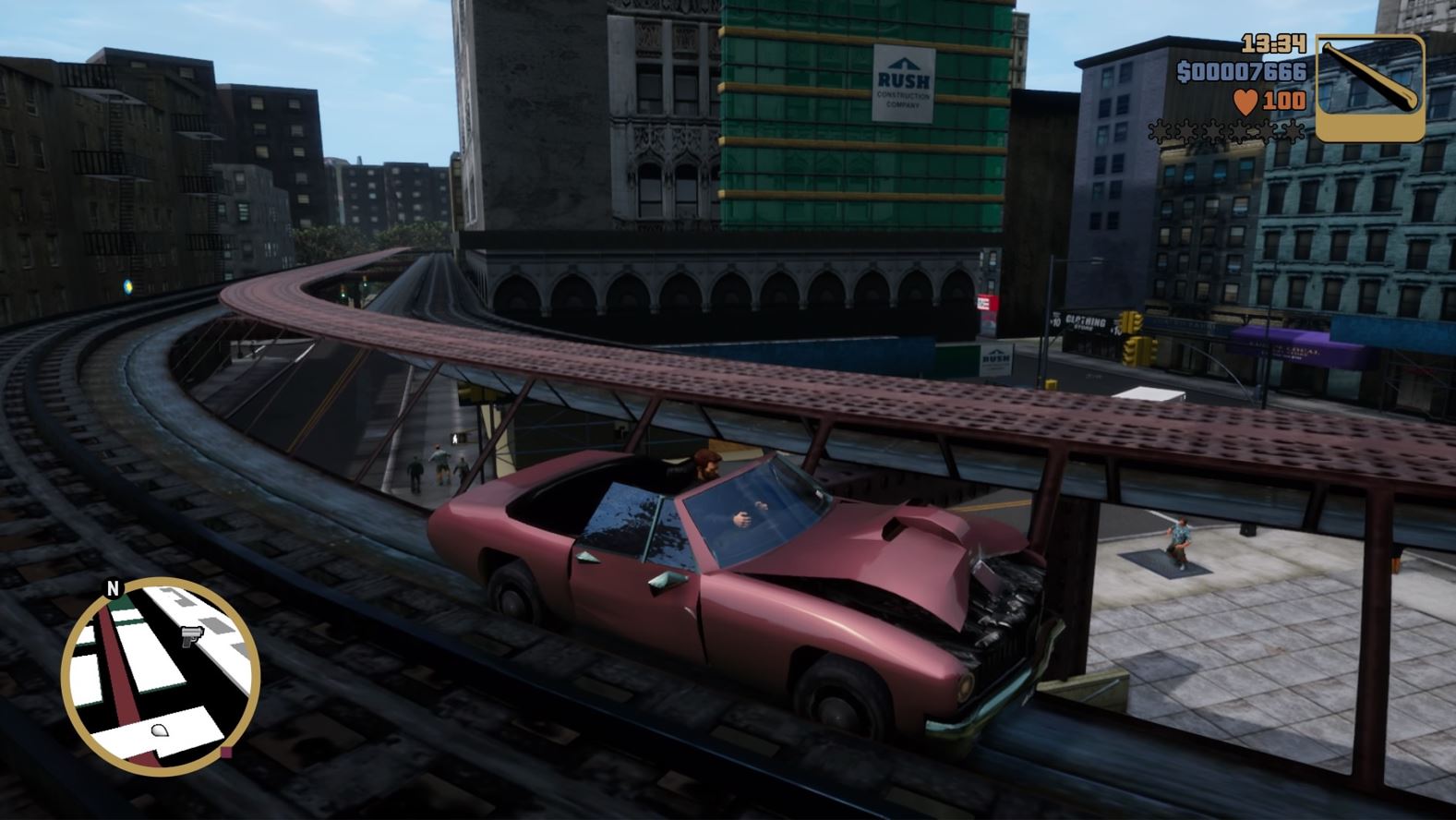 Grand Theft Auto: The Trilogy – Definitive Edition is a collection of three of the greatest games of the early 2000s. Unfortunately, there are too many technical issues to rightfully call this the definitive edition. This is a case of two steps forward, one step back. There are improvements to the mechanics for gun battles, but on the other hand the visual enhancements aren’t always improvements. Many visual glitches and bugs that appear to be leftovers from the original release are still present, and watching them unfold in 4K HD can range from horrific to hilarious. These games are all masterpieces and as such deserve a better collection than this. In spite of the flaws it can still be a fun nostalgia trip for old fans or a good way for newer fans to discover the games before Grand Theft Auto V, but between the dated mechanics and inconsistent visual performance, Grand Theft Auto: The Trilogy – Definitive Edition is far from perfect.