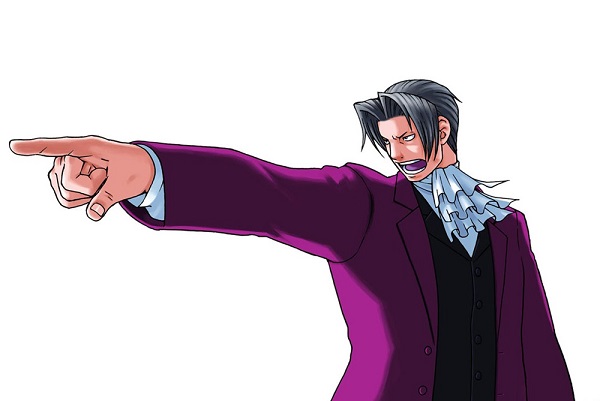 Miles Edgeworth: Ace Attorney Investigations Volume One is split up into four episodes consisting of only two separate plots. Both stories, though, star of the calm and collected Miles Edgeworth and his nitwit sidekick, the appropriately named Dick Gumshoe. The first story, “The Turnabout Costume,” is rather short and to the point and takes place at a masquerade ball inside of a hotel. We are introduced to Detective Gumshoe right off the bat as he rushes into the lobby of the hotel proclaiming that there’s been a murder in one of the women’s restrooms. Coincidentally enough, The Prosecutor for the Public Office, Mr. Edgeworth, just happens to be there at the same time as his cohort. The story, unfortunately, is not very in deep, and fails to really pull readers in all that much. In the end, readers are left with a straight-to-the-point, solved murder case before they can even blink.

The second tale, “The Turnabout Last Number,” is divided into the final three episodes of volume one. Edgeworth and Gumshoe are at a rock concert that is being played by a band named Bird Wing. This is supposed to be Bird Wing’s farewell concert as the band is going to be splitting up after the night. For some odd reason, however, this also happens to be Dick Gumshoe’s favorite band of all time, further pushing the notion that his only narrative purpose is to annoy us to no end, but in a charming sort of way.

The band is split up into four members: Holland (lead singer), Byran (guitarist), Tannyn (drummer) and Hiedi (bassist). The show goes off without a hitch and the band performs their last song. They head off the stage and are waiting for the cue to initiate their encore, when all of a sudden they are unable to find Holland. They decide to go onstage without him, thinking that he is possibly already on the stage-lift in the basement that will bring him back up to the main stage. When the encore begins, the lift is brought up and laying on it is Holland — dead. Readers are then taken on a clue-infested journey that does a great job of making them feel like they are actually trying to solve the crime with Edgeworth. Readers will have the opportunity to look at the same things Edgeworth does, and come to their own conclusions about who they think the culprit really is.

Miles Edgeworth and Dick Gumshoe are developed right off the bat and you know very quickly that Miles is the stereotypical, savvy, know-it-all type detective that will have no problem solving a case. We also realize that Dick Gumshoe is a bumbling sidekick that is more or less there for comic relief rather than actual plot movement. The two together, however, make the perfect combination for a crime solving duo. The other characters that we encounter are really just “suspects” that we learn about through each story. The writer, Kenji Kuroda, does a great job of giving us just enough information on each person so that we can have a strong impression about them while trying to solve the cases. The way Kuroda develops them, readers will almost start to decide for themselves which suspects they  believe are innocent and which one(s) are guilty. He does this in such a way that there is always a possibility for a surprise twist in the end.

This Ace Attorney volume is translated and adapted by Sheldon Drzka, who does a fairly effective job of getting the translation spot on. That said, there are a couple of instances where readers will kind of just scratch their head with confusion. A specific example would be the lyrics of the song that Bird Wing is singing during their concert — either the lyrics were intentionally meant to be written in a totally bizarre way, or they weren’t translated well in the slightest. When there are specific words that don’t translate well or won’t translate at all, Drzka provides a nice glossary of terms in the back that readers can consult if they want to know what Bento is or a clarification on other verbiage.

The visuals are not the best we’ve ever seen but they don’t need to be. Kazuo Maekawa does a great job of focusing on right-to-the-point detail in the pieces that require it. The focus of the art gives readers a great impression of how the story is progressing, and furthermore does a nice job of showing off the characters’ emotions. One wonderful thing that Maekawa does is that he draws clues into the actual story. This goes back to that expert level of detail he puts into his work here. The reader can have a great feeling of satisfaction knowing that they can scour the art frames and see if they can solve the crime themselves.

In the end, Miles Edgeworth: Ace Attorney Investigations Volume One picks up where the Ace Attorney series left off and does the name and overall franchise justice. The two mysteries that fill up the four episodes of volume one will keep readers entertained. The first story, however, is not as in-depth as the second one, and some may feel like it’s ended abruptly. The second story does a much better job of involving readers and really sucking them into the mystery. When it comes down to it, Miles Edgeworth: Ace Attorney Investigations Volume One will keep people satisfied with the two short stories it provides. Plan accordingly, because murder is afoot!