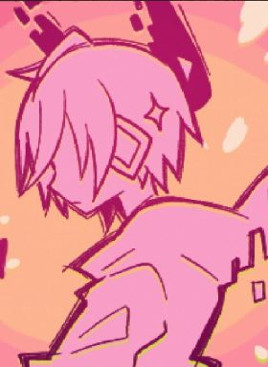 This activity may come naturally for many people, but for some of us there is no task more terrifying than venturing out into the world to strike up conversations with strangers in hopes of making new friends. Those fortunate enough where human interaction is not a daunting ordeal may have difficulty conceptualizing this, but for the other part of the population simple tasks of having to talk to people can be panic inducing where every word that is stumbled over or awkward pause or statement will play out in a catastrophic manner inside the person’s head, while the person they are speaking to remains oblivious to the cataclysmic social meltdown taking place inside this person’s mind. Yoshi Nanase, better known as Nanashi, the playable character of 1bitHeart, is someone who fits this profile.

Nanashi is a lonely boy with agoraphobia who doesn’t go to school or really ever leave his room. His plans for the day were basically just stay inside his room and not face the world or any people in it, but his blissful plans of zero human interaction came to a crashing halt when some girl named Misane appears and decides that they are going to go out into the world and make friends. Misane is strangely calm for someone who is suffering from amnesia. This is quite a pickle Nanashi finds himself in. As someone who dreads going out in public and interacting with people, this sounds like a terrible idea. On the other hand, when you are a shy teenage boy and a girl appears out of nowhere and wants you to do stuff with her, the ability to say no kind of vanishes. Just a side note, it’s a little interesting that this is a game about making friends but it is entirely single player, which sounds like a completely heavenly way to meet friends to me.

The world of Nanashi is a very high tech one where computer programs seems to govern everything, making the immersion between humanity and technology so strong that people are able to get hacked, which ends up relating to one of the mysteries Nanashi finds himself having to solve. Bitphones seem to be quite popular in the world of 1bitHeart, which kind of seem like the next evolution of the iPhone if it was made by Skynet. There are three modes to 1bitHeart, Detective mode is where Nanashi and Misane travel through the city and look for various clues to solve mysteries. Conversation is when Nanashi has to interact with people and have important conversations and has to choose the right times to interject and the appropriate phrase to use. Free mode is available after the main game has been cleared, and this opens up access to minigames and additional conversations with the townsfolk, though it may feel a bit sadistic making Nanashi go through unnecessary conversations. 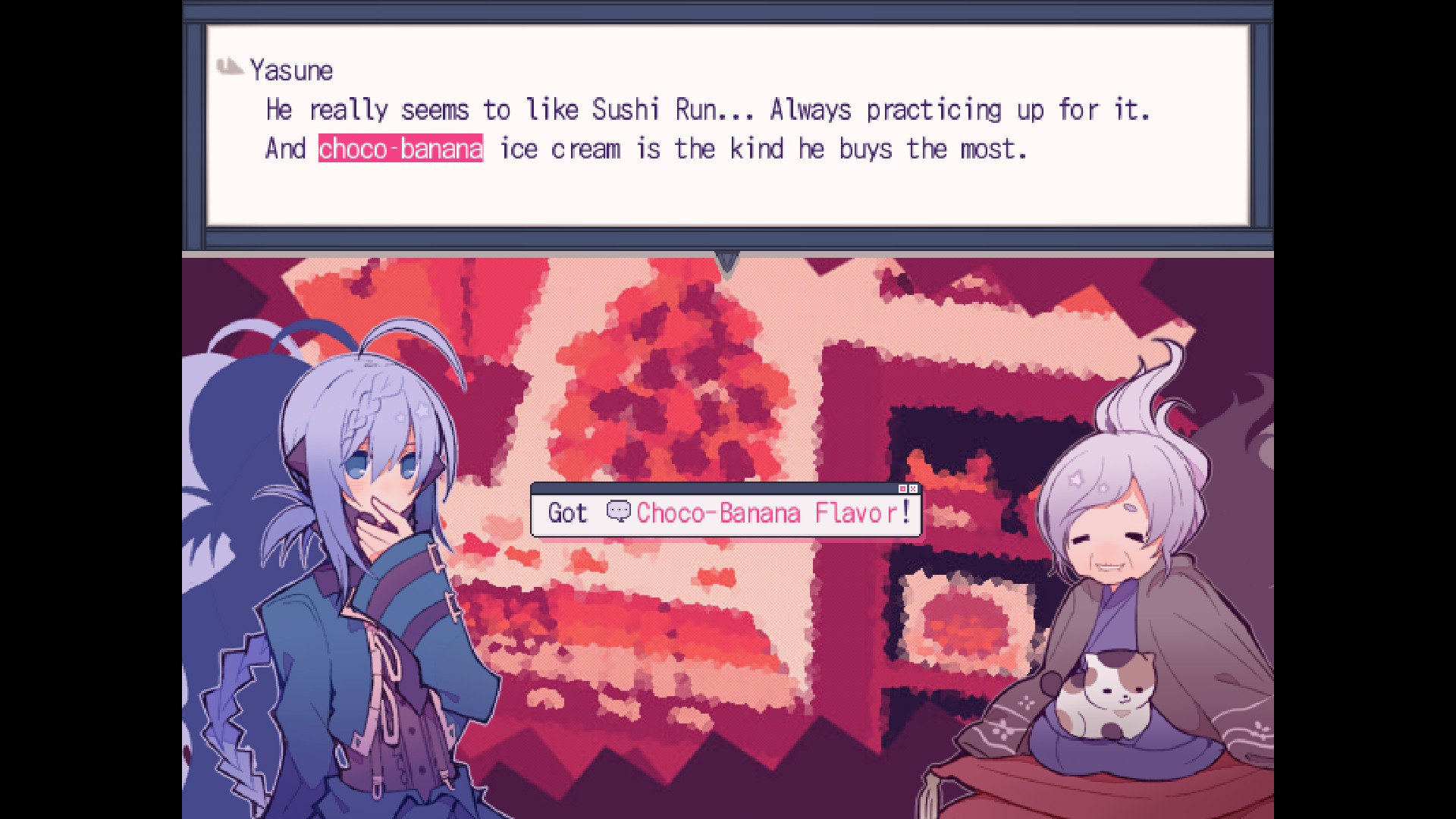 The Conversation mode is an interesting minigame that deals with Nanashi’s fondness of human interaction. As stated above, when Nanshi is talking to another person there will be pauses in the conversation where Nanashi can choose to keep listening or to offer an opinion. Clues are given throughout the conversation as to what might be the appropriate thing to say, but just like in real conversations, Nanashi has to not only say the right thing but say it at the right time. To truly convey the feeling of dread he must be feeling during the interaction, conversation sequences are where Nanashi can actually “die” or at least get a game over. Incorrectly interjecting his thoughts into a conversation will cost Nanashi one HP and when his HP reaches zero the game is over.

When this happens the person Nanashi is talking with gives a confused reaction while Nanashi goes into panic mode, freaking out about how awkward he is and the desire for him to crawl under a giant rock to hide from the world is palpable. And provided he still has a portion of his HP left (more than likely he will) the conversation can continue with no real negative external consequence brought to Nanashi, despite the fact the world nearly came to an end in his mind which seems like an accurate portrayal of the internal monologue for introverts, people with social anxiety and people who just generally view themselves as socially awkward. 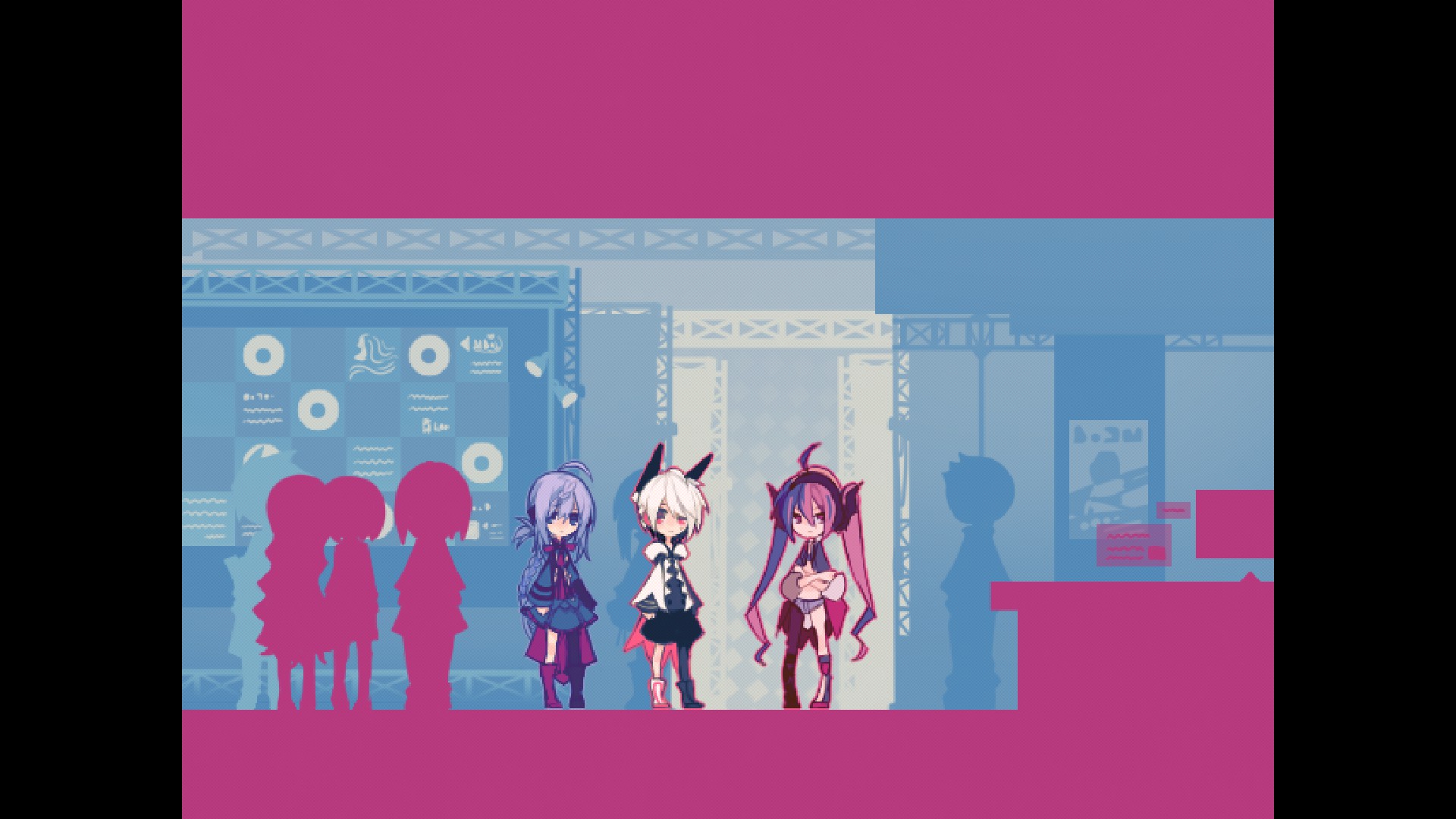 There isn’t much action in 1bitHeart to speak of, at least as far as battle and jumping goes. Nanashi walks through town trying to solve mysteries and make friends through conversation minigames. Sometimes the person he has to talk to next or the exact objectively isn’t completely clear but if he wanders enough and talks to everyone eventually he will stumble upon whoever he needs to in order to progress the story. There is no challenges that will require complex memorization of patterns or result in blistering your thumbs, 1bitHeart is simply a pretty relaxing game with a cute story.

Visually 1bitHeart is a very unique game. The color palette is fairly limited, and most areas tend to focus on a particular color and make everything various shades of it. Nanashi and Misane exist in all the appropriate vibrant colors, as do other characters in the game that are important enough to not get relegated to only being simple background dressing. Everything is 2D and designed in a style that would be appropriate for a cartoon show, but since it is designed by Miwashiba this shouldn’t be surprising since she is known for her art style. 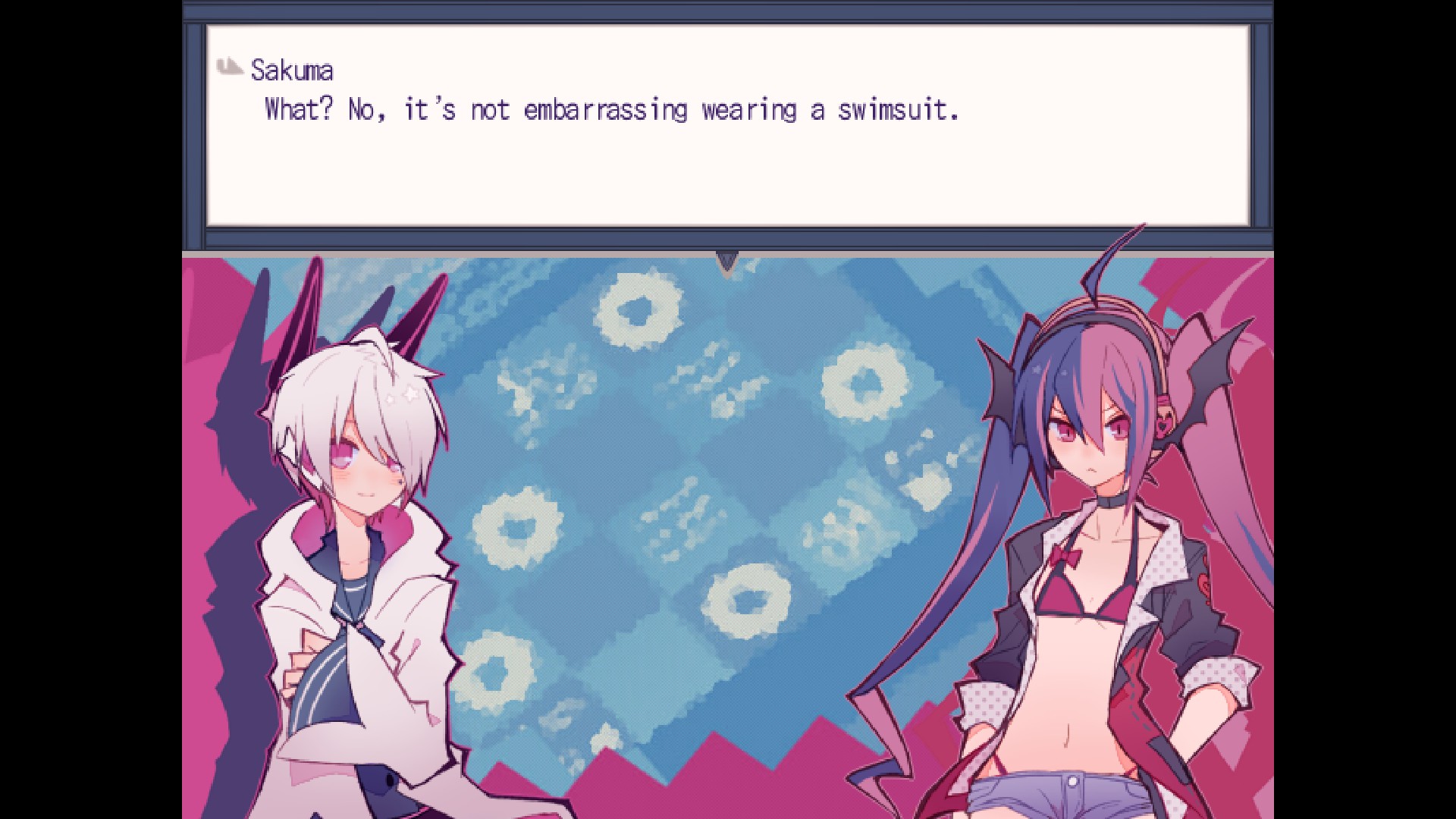 1bitHeart caters to a specific target audience, but what it does for this type of experience it does well. It takes about four hours to complete which feels like about the proper length for it. Solving mysteries and making friends is the goal Misane has for Nanashi, and watching him panic and squirm while awkwardly fumbling through conversations has a certain endearing and relatable charm to it because of how accurately the game captures the internal monologue of introverts going into social awkwardness panic mode. People looking for action or something fast paced won’t find it here, but fans of visual novels or the questioning sequences from games like Ace Attorney or Danganronpa will likely enjoy 1bitHeart. It’s a casual friendly game, but sometimes those can be quite nice.