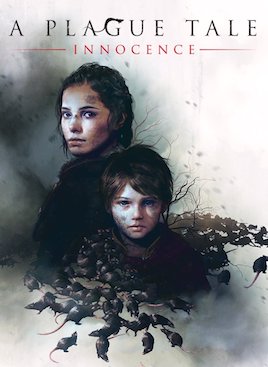 Over the past couple of years, what many deem the “AA” game has thrived. Despite the increasing influence and prosperous nature of smaller/independent titles, the uncertain, underwhelming and often controversial cycle of modern-day AAA development has carved out an almighty gap in the market for publishers like Paradox, Bigben, THQ Nordic and Focus Home Interactive to take hold. A strange middle-ground, it has to be said — a chasm-like stretch where games are neither big-budget, grossly-marketed big-hitters built by hundreds of creators in one case, or digital-only downloads created by sole groups/individuals in another. Often these titles flounder on one or more key areas — a result perhaps of a project’s restricted (or more than likely managed) budget and wishful objective to satisfy both extremes at the same time. Of being both technically competent yet engaging to play.

The latter of these publishers, Focus Home Interactive, in the last couple of years have been steadily building a portfolio that lists long-running staples like GIANTS’ Farming Simulator series alongside new IPs from already-renowned developers like Dontnod with last year’s Vampyr. While it’s unfair to dismiss these releases under the exact same, uniform banner that AA entails, the intent is to signify a resurgence in the kind of release that has, up until a few years ago, been strangely absent from the charitable limelight that video game releases are provided. A Plague Tale: Innocence is French developer Asobo Studio’s first original project since 2009’s Fuel (having spent most of their time on licensed IPs or assisting in the development of other titles), yet it’s hard to see that potential inexperience, a near decade-long stretch, show up. Over the course of its twelve-to-fifteen hour, single-player campaign across 14th century France, A Plague Tale: Innocence easily crafts what can only be described as one of the more effective, story-driven titles that’s been released for some time.

A bolder statement to raise when, if one decides on being blunt and a touch dismissive, you could so easily scorn the game as but another forced escort/forced stealth foray that does little to build or reinvent the many cliches it picks out from AAA development. Suffering at points from those same artificial barriers imposed so as to keep players steadily moving along a linear path (both figuratively and literally). But that’s precisely why A Plague Tale: Innocence is as fascinating to discuss as it is. To denounce the genres it encompasses and the direction it takes would be to ignore the one critical area that the game pulls off with superb tendency: its narrative. Despite the many trips down uneventful trope avenue the game takes — from the forced walking segments, to the scripted chase scenes where the sprint function so conveniently becomes enabled [again], to the set-pieces usually involving holding off a set number of enemies in a compacted space before the game deems it OK to move on. There are a lot of core gameplay mechanics which can be scrutinized right down to their technical simplicity and repetitive insistences, yet it’s the way the game combines the harrowing tone of its setting with the deeply-rooted personal hooks of its character-led tale that allows A Plague Tale to stand above these brief lulls. As something entirely fresh and exciting in a genre (a few genres in fact) where narrative and the reason to care about the people on display is almost non-existent. 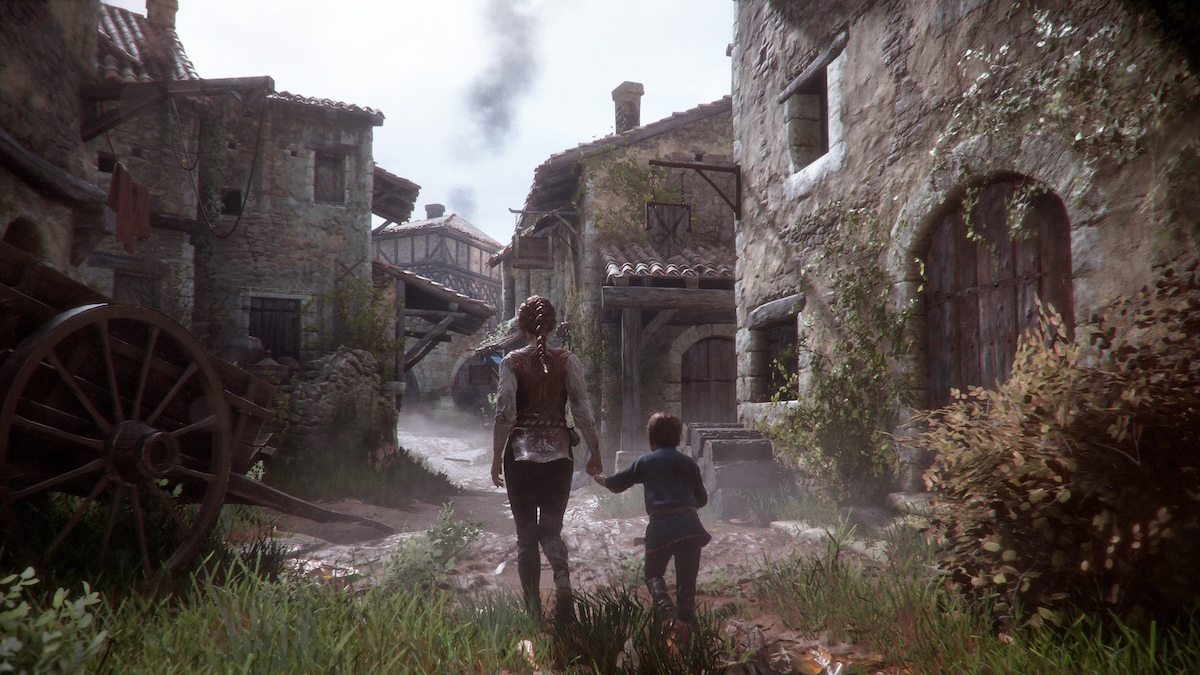 But from the moment the game kicks off, Asobo demonstrate a clear understanding of how to write and present characters the players can easily empathize with. Contemporary influences from games like The Last of Us and Brothers: Tale of Two Sons — openly shared by the studio themselves — are clear to see, but in a way the game draws a few parallels more to Ninja Theory’s own story-focused, character-led title in Hellblade: Senua’s Sacrifice (a game described, bizarrely and paradoxically so, as an “independent AAA” release). A Plague Tale: Innocence puts players in control of Amicia De Rune, daughter of a noble lineage and older sister to five-year old Hugo — a child suffering from a mysterious illness during The Hundred Years’ War. After events transpire during the opening chapter, Amicia is thrust into the unprepared role of looking after Hugo as the two find themselves on the run from the English Inquisition, whom appear to be looking for young Hugo for potentially malicious purposes. While the game is physically structured around sectioned-off regions and environments the player must sneak and carefully navigate a path through, a large portion of A Plague Tale’s presentation centers around the relationship and developing interactions between Amicia and Hugo.

It shouldn’t be understated that Asobo’s consideration for how the aesthetic plays into this — and the ways the game illustrates the rotten, infested unease of such a historical period — is what gives the cast, its due credibility. Many a scene of piles of carcasses, ruined towns and burned countryside alike presented in considered palettes of bloody and burnt hues — the horror of the scenarios on show serving a reactive purpose more so than simply a visual equivalent. Thus it’s the ways in which both Amicia and Hugo deal with such transpiring events during their travels that ends up being A Plague Tale‘s most accomplished aspect. One that, most importantly, allows both characters to present their opposing quirks and attitudes of which inevitably causes friction between the two siblings — Amicia’s head-strong, conserved yet inexperienced flaws as a young nobleness, clashing with Hugo’s bewildered, positive yet naive development as a still-young child. Small and minor these exchanges can be (and some you could argue artificially placed so as to serve a dramatic turn-about) in filling the figurative space in-between puzzle-solving and stealth sequences alike, it works to tremendous effect. 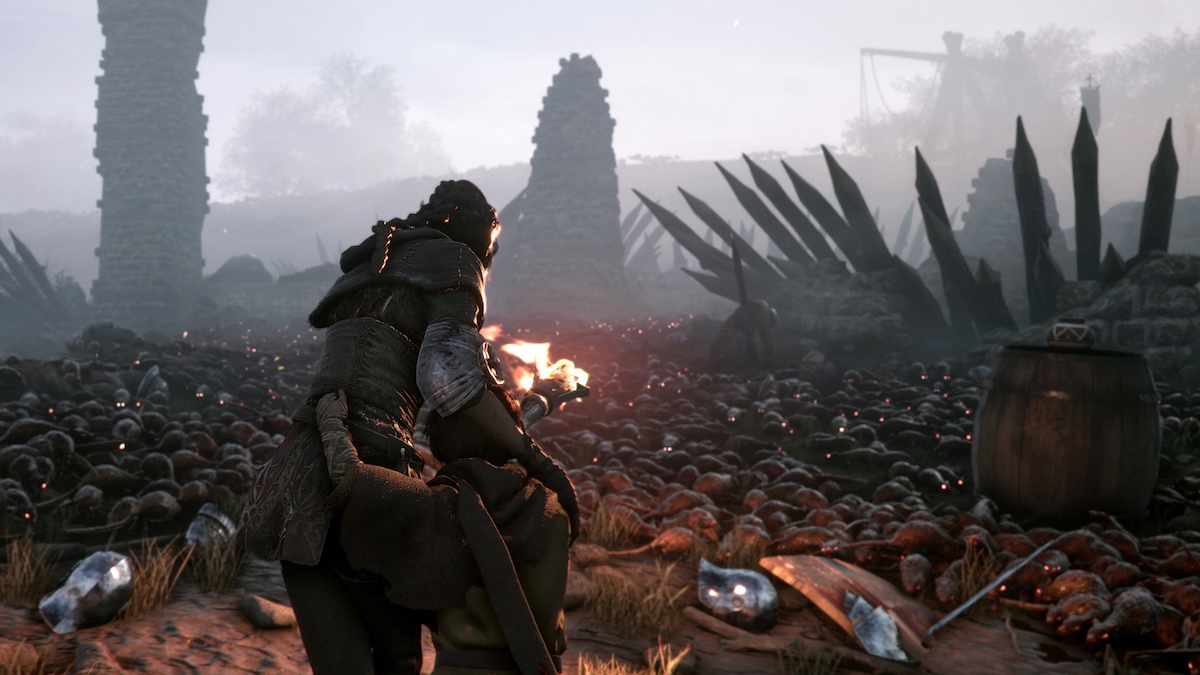 The surprising attention to narrative context — and how characters react to the situation on show — even feeds into the core puzzle-solving elements. One that involves both the manipulation of fire (creating/extinguishing/moving such sources of light) as well as what might be considered the real antagonists of the game: the many rats that infest environments on display. While the technical and mechanical specifics here aren’t anything to write glowingly about — the basic gist is that you must avoid making contact with rats by creating area-of-effect style safe areas, rats being instinctively fearful of light sources — it’s the way the rats are used in relation to the characters involved that deserves special mention. Most notably the sound design implemented into the swarm-like mass that can often land with countless hundreds of the rodents on-screen at any given time. Safety always seeming (to both the player as much the characters on-screen) far from certain.

The near-blotted squeaking, the thundering trample as rats rush across a given space — for a game tailored to a more adventure/stealth-orientated leaning, A Plague Tale‘s sprinkling of dread (and the more psychological aspect of horror) in its use of rats lends the game a sense of uncertainty throughout. Especially since stepping out of the field of a light source has nearby swarms rush you. While later puzzles do expand the basic premise, namely the way rats can be manipulated (and end up being manipulated, again liberties with realism stretched a tad further), never for a second does the game drop the idea that survival is above all else paramount. This basic rule applies too in other fields of puzzle-solving where stealth is required to avoid contact with Inquisition soldiers. The mechanics here are a lot less simple in their set-up — throwing projectiles and hitting nearby objects to distract enemy units, hiding in over-growth until patrolling soldiers have their backs turned. 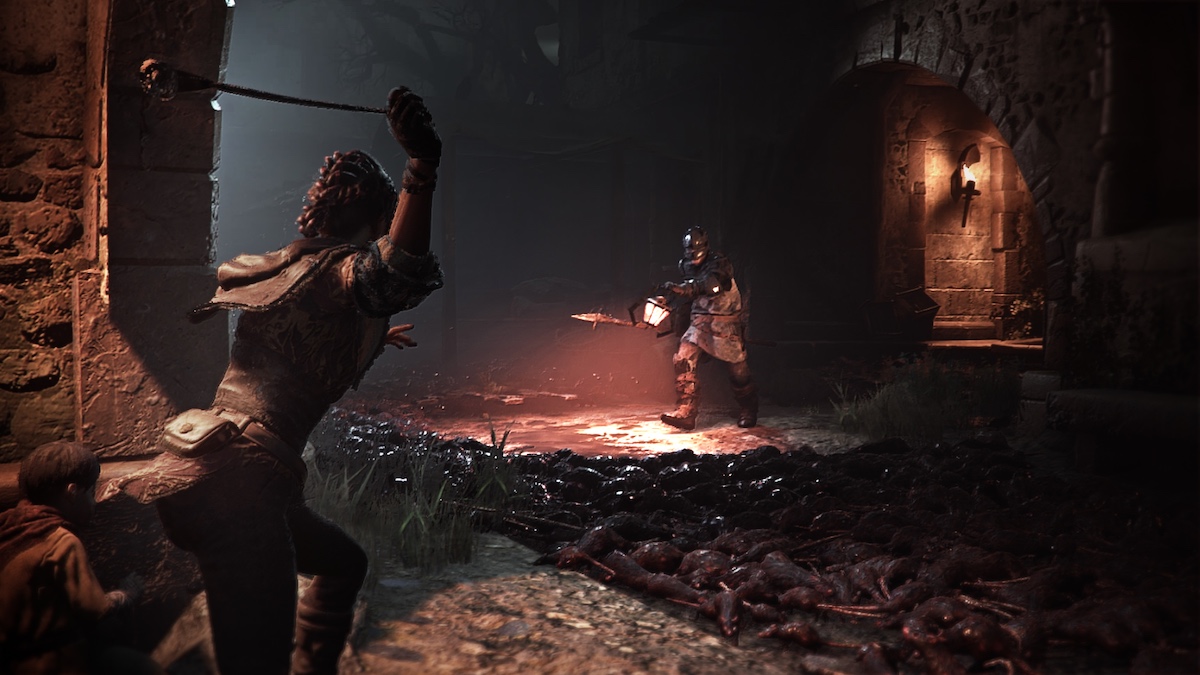 The manner at which soldiers can be dealt with in-stealth do expand later on and fortunately provide some more varied solutions in the closing few chapters when the mechanics surrounding armor, light sources and the aforementioned rats all combine with modestly entertaining results. But it’s the rats that ravage much of the pivotal moments; almost perplexing that so few games previous have not used similar mechanics in a way that serves both gameplay as much the narrative being presented. An early scene/puzzle in the game involving a pig (and not giving too much away in regards to both puzzle-solving and context in the story), though brief, delivers such a gruesomely opportune example of how Asobo so cleverly weave the technicality of puzzle-solving with the gravitas of its characters’ reactions. Allowing the brief moments of down-time and shifts in visual aesthetic — swapping out dull, ravished palettes of brown and black, to more earthly hues and even a later winter transition — to feel precious and deserved, not just for the player, but for Amicia and Hugo. The growing list of support characters that enter the fray in later chapters also adding to that feeling of working towards something.

As impressive the storytelling and use of character interactions is, A Plague Tale is not without a degree of consideration for players who still will likely scrutinize the remaining elements surrounding it. The user-interface especially, which offers a list of options which one can tweak so as to include or otherwise remove potentially obtrusive elements. Even alter the reach of the game’s aim assist which comes into play when locking onto an object that can be interacted with through the use of projectiles. There’s even an option to disable all manner of hint or indicator, in a similar manner to the Pro Mode in The Legend of Zelda: Breath of the Wild — allowing players to immerse themselves completely in the game. During play, there’s also (to return to a previous point about borrowing blatantly from AAA conventions) a crafting function that allows you to upgrade your primary tool/weapon, a sling, as well as the ability to increase inventory space and the strength of late-addition tools. While the crafting mechanic in of itself becomes crucial late on, players shifting back and forth between different alchemic tools, rarely do the upgraded tools or perks prove beneficial or clearly apparent — seldom offering a key time, particularly with its few boss battle sequences, wherein an upgraded sling feels necessary. 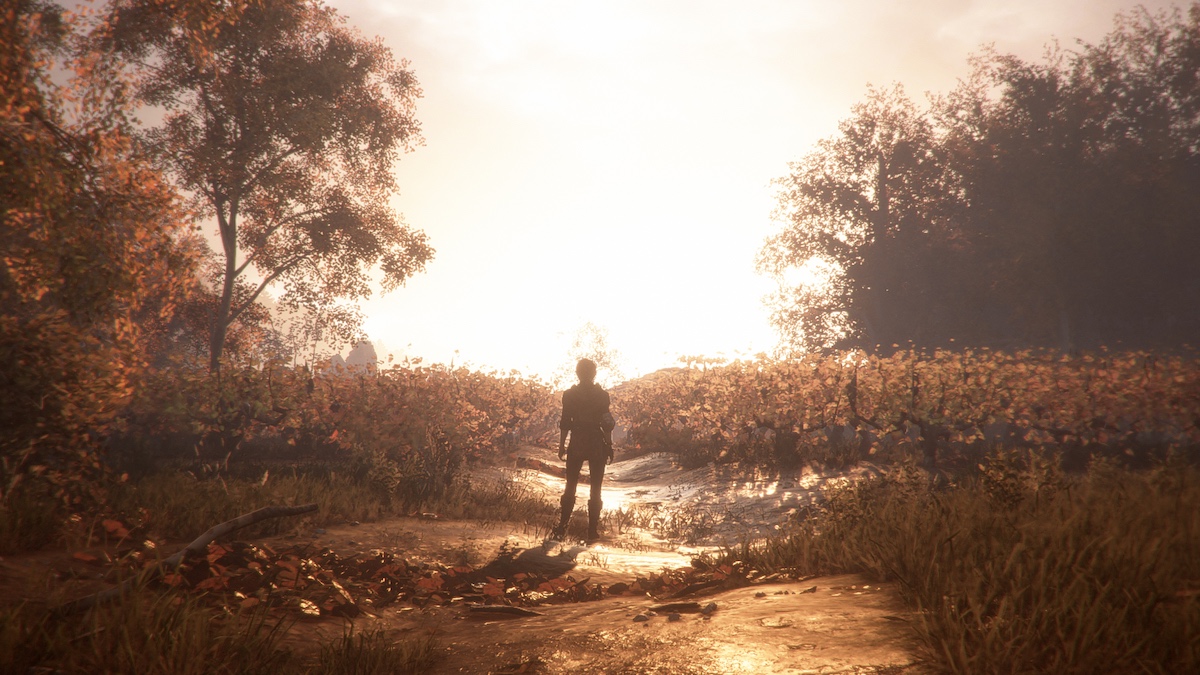 Despite the confinement in bog-standard AAA conventions and set-piece tropes on occasion, the same can not be said for the execution of its story and of its characters, which — barring the next six months — may go down as one of the best and most surprisingly unique examples you’re likely to find this year. A Plague Tale: Innocence is more than justified in its focus on the narrative presented and of the journey its main protagonists Amicia and Hugo go through over the course of the game’s events. While the core gameplay’s puzzle-solving and stealth aren’t wholly inventive from a structural standpoint, it’s the integration of the swarm-like, horror-styled rats and their intended influence on the tone of such moments that comes to define the experience and is all the better because of it. The game is not without its flaws, but with such a measured and considered use of visuals and sound, particularly in tandem with its narration, you’ll be hard-pressed to find a game as unexpected and thus as fascinating as A Plague Tale: Innocence. One can only look on with intrigue as to where Asobo Studio go from here.