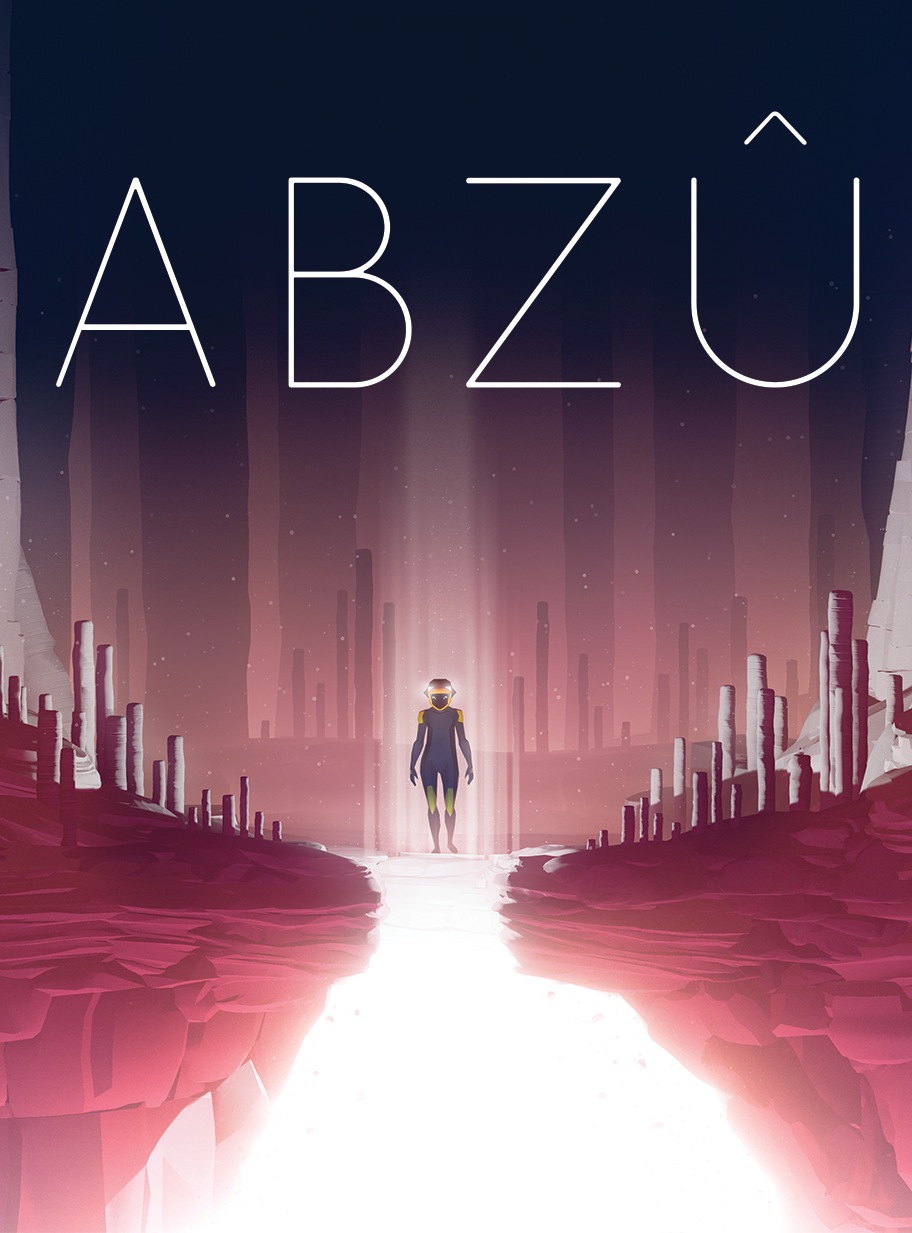 If you’ve stumbled upon this review, you’re probably one of three types of people. You either think Abzû is a weird name for a video game and want to know more about why there’s a circumflex above that ‘u.’ Maybe you’re someone who found that crazy school of fish in the header image compelling and clicked on through. Most likely, you’re looking for the answer to the one major question surrounding developer Giant Squid’s debut title: is Abzû the underwater version of Journey we hoped it would be when it was first revealed at E3 2014? Yes. Yes it is. If this is what you needed to know before diving headfirst into Abzû, then you should stop reading now. This is the type of game that you’ll want to go into as blind as possible in order to maximize your sense of wonder.

Before diving into exactly why Abzû is so captivating, let’s qualify the above statement a bit. After playing through this enchanting adventure, most people will probably agree that Journey is a better game. This isn’t to say that Abzû isn’t absolutely worth playing through multiple times, but it isn’t the icon that thatgamecompany’s 2012 bite-sized behemoth is. Here’s the thing, though: that isn’t really a knock on Giant Squid’s work. As someone who would readily submit Journey into a totally subjective debate over the ten best games ever, it’s tough to imagine any game in this style getting closer to thatgamecompany’s achievement than Abzû does. The combination of multiple ambiguous plot lines, mesmerizing wildlife and stunning visuals make Abzû yet another example of the dominance of small developers in 2016.

Dropped into the depths of the open ocean, you take the role of a mysterious diver. With no dialogue, objective indicators or initial detail of your character’s motivations, Abzû is absolutely one of those games (fans of explicit exposition: this is not the game for you). Exploring the colorful underwater expanse and learning as you progress are the name of the game here, and Giant Squid does an outstanding job of embracing these core tenets. For every quiet moment of beauty there’s a joyous rush or a dose of tension. What’s more, if you’re the type of gamer who lives for those iconic moments of beauty, those waves of speechlessness that only a well crafted scene can bring, you’re in luck. It’s tough to go into too much detail about the specifics of these moments without instantly removing their resonance. This would be like describing the giraffe scene in The Last of Us in detail or spelling out the big twist in last month’s Inside, two actions that inform readers in the worst way. 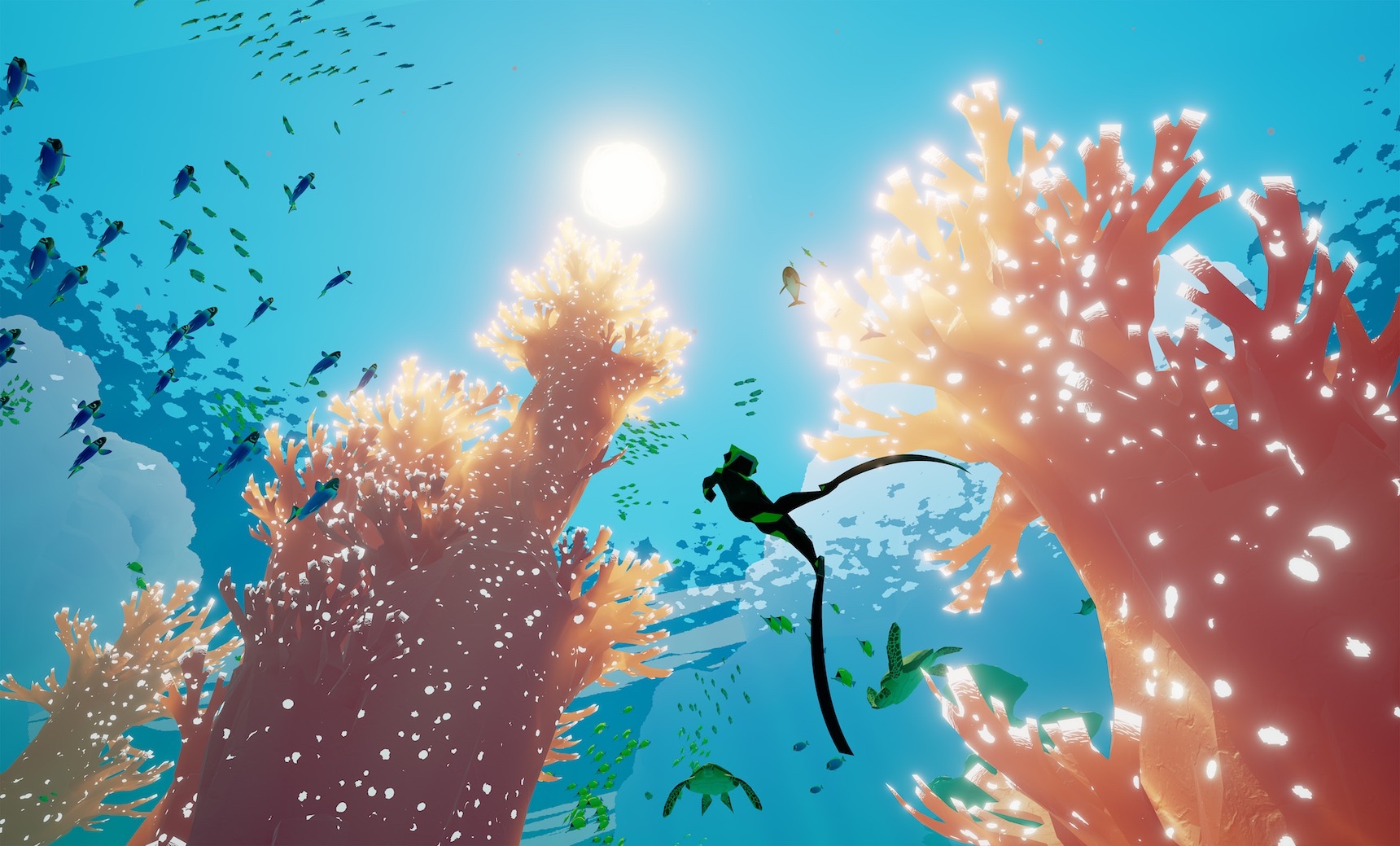 In fact, Abzû‘s name actually holds a deep meaning to the very idea of discovery. According to Giant Squid, Abzû is a portmanteau of the ancient words “ab,” meaning ocean, and “zû” meaning to know. A more appropriate name couldn’t have been chosen, as the entire game totally takes place in an ocean of wisdom. The second someone tells you exactly what’s going on, your ability to discover that information on your own disappears. To spoil any tangible details of Abzû would be criminal, as the best part of the entire experience was not having the smallest clue what was coming next. Of course, this is also a video game review, so it’s sinful to leave out any semblance of premise, as well. In a nutshell, your character possesses a very special ability and there’s some pretty dark stuff going on in the oceans depths that your power may be able to thwart. Along the way you’ll interact with some misunderstood wildlife, develop bonds and go to places you wouldn’t imagine being deep in the ocean. Is this summary comically vague? Absolutely. Would any further narrative detail completely ruin your experience? No doubt about it.

We all know that water levels are the worst, so a game whose entire gameplay hook is based around swimming could have been a disaster. Thankfully this couldn’t be further from the truth, as guiding your diver through Abzû‘s breathtaking environments feels just right. Holding the swim button lets you glide through the water with just the perfect amount of weight. Giant Squid struck a delicate balance with the weight of the diver, allowing her to glide majestically while still being dense enough to feel responsive. If you’re the type of gamer that can’t wrap their head around inverted stick controls, then you can certainly adjust this on one or both of the analog sticks, though non-inverted movement controls feel less elegant. Sure, there are definitely moments where your sense of direction will momentarily fade, but this is easy enough to correct that it never becomes a problem. The point is, if you want to play a game that makes swimming feel smooth, then it’s right here. 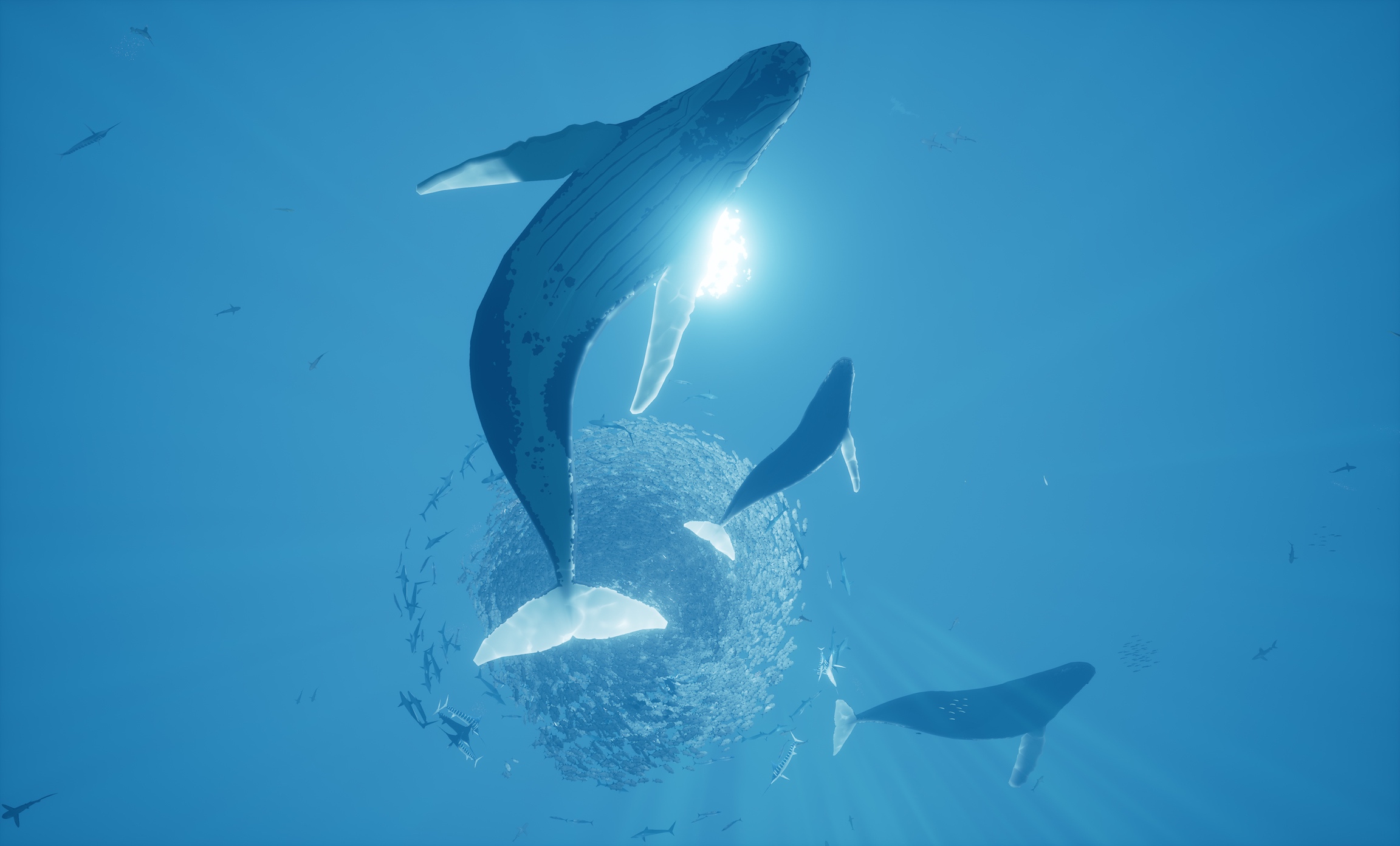 Much like in Journey, your character has the ability to create a small tonal pulse in order to interact with the environment. This ability allows you to interact with simple puzzle elements, revive helpful underwater drones and open passages to new areas. Abzû is also brimming with secrets, so if you’re looking to wander off of the beaten path in order to find a new species of aquatic life or observe this ecosystem during unlimited meditiation, you’re in luck. It’s worth noting that there is another type of secret collectible that unlocks something pretty neat once you have them all. Now, if your next question is whether Journey‘s famous drop-in-drop-out multiplayer is present, there’s a very good reason why the answer is no. Because Abzû‘s entire thematic premise is based around solitude, it doesn’t really make sense to have other players popping into your game. Aside from the fact that Abzû is definitely its own thing and not a Journey palette-swap, this is totally logical. Despite the fact that you do make some interesting friends along the way, Abzû begs you to come to grips with your solitude in the midst of an ocean of uncertainty.

If you’ve made it this far down the page, you’ll have seen four screenshots whose allure has spoiled the next point completely. Abzû looks amazing. Don’t let its polygonal aesthetic fool you, the sheer amount of creatures and plants on screen at any given moment is stunning in motion. Being able to swim through massive schools of fish before exploring coral reefs, underwater civilizations and ancient passageways is even more stunning than it sounds. What’s more, every moment of Abzû feels perfectly paced. Cacophonies of color precede desolate darkness; lifeless stretches pepper a world brimming with life. Your sense of sight isn’t the only recipient of Abzû‘s beauty, as it sports one of the best orchestral soundtracks in video games, period. Every scene seems to have the perfect background music woven in, amplifying whatever mood you happen to be in. There are certain games out there that you can put on your television and instantly mesmerize a room with, and this certainly belongs in that group. The one technical bummer here is that there are some fairly lengthy load times when you boot up your save or enter a new environment, which isn’t game-breaking by any means, but it’s still noticable enough to break immersion. Still, when your hands are actually on the controller, Abzû is both a visual and aural delight. 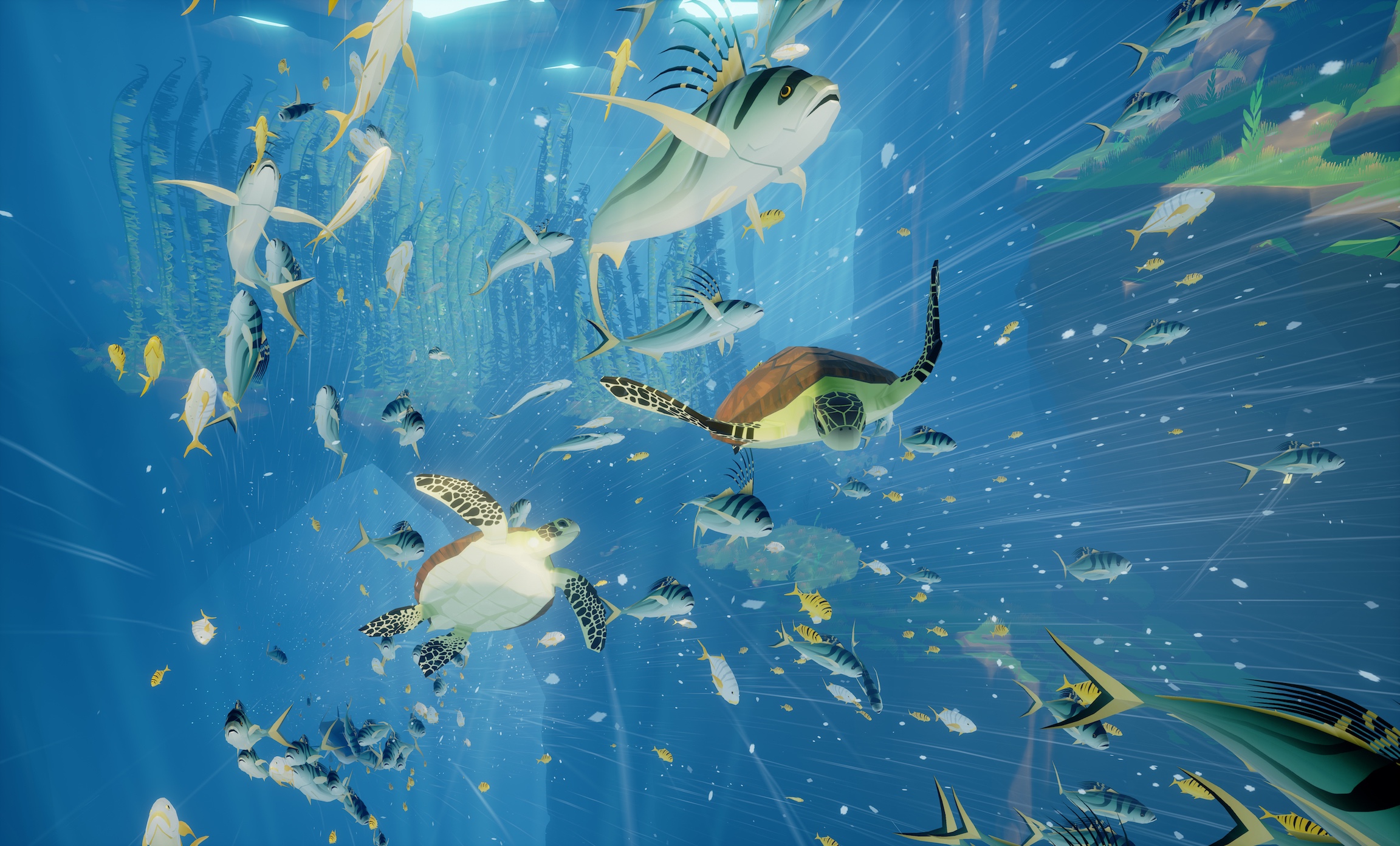 Abzû is the type of wondrous palate cleanser that reminds us of the beauty of video games. When the art director of Flower and Journey, Matt Nava, left thatgamecompany to form a new studio, we could have gotten a knockoff, Mighty No. 9 version of Journey that left us shaking our heads. Instead, Abzû is exactly what fans of Nava’s work were hoping for. A beautiful, emotional journey through some of the best looking environments on the PlayStation 4, Abzû was well worth the wait. It’s insane to take a step back and think about how many incredible games from small teams have dropped in the first two-thirds of 2016. We’ve gotten to play The Witness, Firewatch, Superhot, Hyper Light Drifter, The Banner Saga 2, Inside and more. Adding Abzû to that list feels almost as wonderful as discovering the mysteries of its ocean of wisdom.