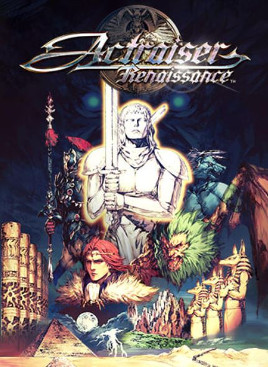 Actraiser was one of the first titles launched for the SNES back in 1991. The imagery in marketing materials of a blue and yellow knight taking on an armored centaur made this title go on many’s wishlist. These pictures were only selling half of what the game was about, as it was an odd-sounding blend of action platforming and civilization management. This odd mix of genres worked well for Actraiser and while it’s a great game with a decent fandom, it’s often ignored when remakes or retro collections are curated. This made last week’s reveal for Actraiser Renaissance all the more surprising, but it was a welcome surprise to many.

Actraiser was the first game I played where the player takes on the role of being God. In the US localized version the player is referred to as Master and the villain was named Tanza, but in the Japanese it was God and Satan, which even with the secularized translation it’s clear from the game dialogue what the player actually is. The game is divided in six areas that follow a formula. The player descends from the Sky Palace into a platforming level where they have to kill monsters to establish a temple. Then the game shifts to an overhead view where the player controls an angel who serves as a liaison between the people and Master. Miracles are done to tame the land so that housing can be constructed while Master protects the people from monsters and responds to their prayers. After the civilization is nicely developed some other monster rears its ugly head and it’s back to the platforming levels to dispatch. After that it’s time to move onto the next area to do it again, though occasionally quests will have you delivering new items to different areas.

Actraiser Renaissance is the same with a few changes and a lot of padding. It took almost six hours to complete Fillmore and Bloodpool, the first two areas, and in that time most could have easily completed the 16-bit Actraiser. For the most part the changes are good, and like a lot of remakes this would be best viewed as something that’s a complementary piece to the original and not necessarily something that’s meant to replace it. A ROM of the original game as bonus content would have been a nice addition. 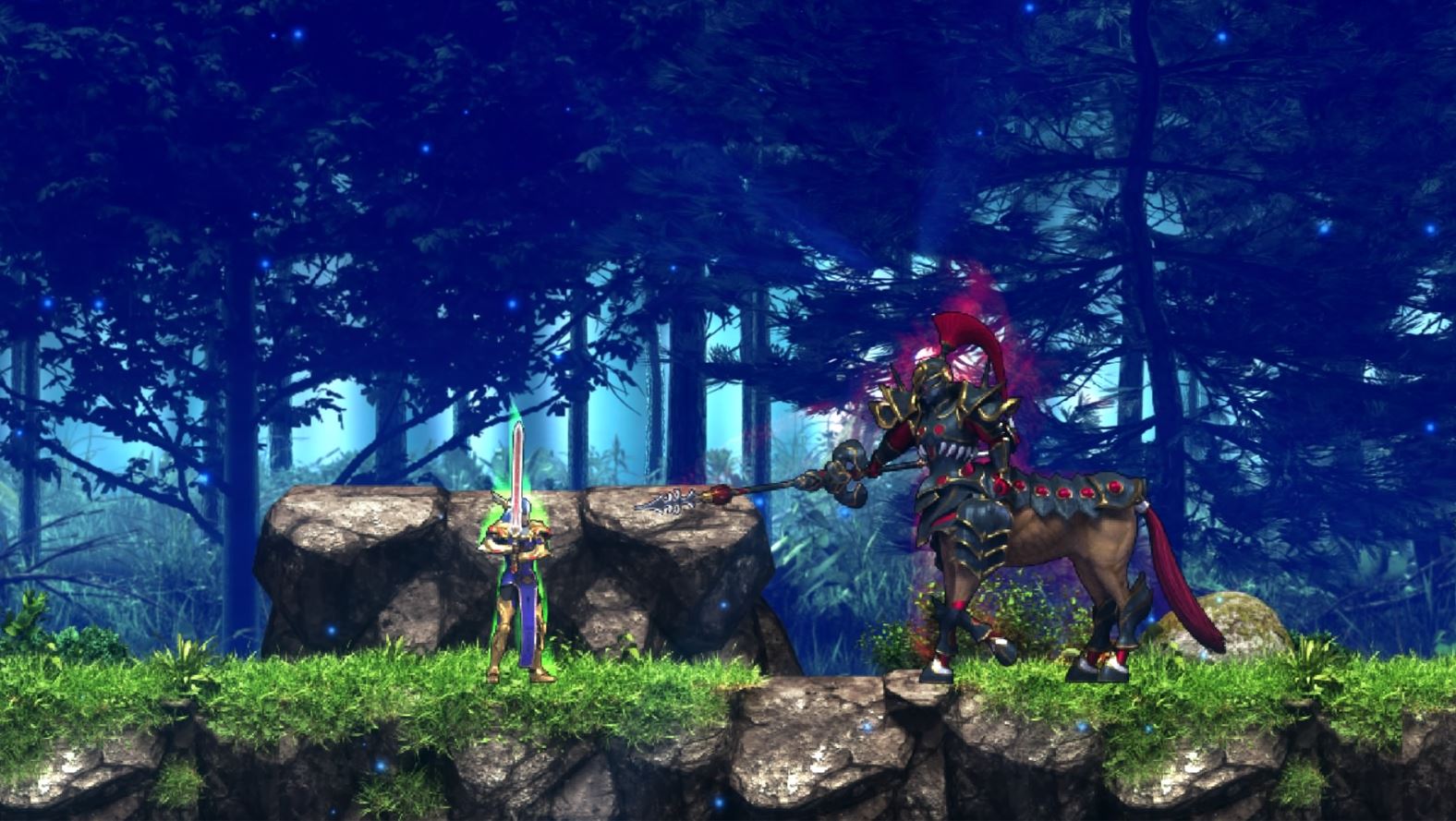 As Actraiser divided into two different types of gameplay there have been changes made to both the action platforming segments called Acts and the simulation portion. The 2D portions of Actraiser Renaissance generally feel like improvements. The Master, or Lord of Light as he goes by these days, does combos with his sword attack. Holding up and attack does a jumping upward thrust, moving the thumbstick forward on the third hit in the combo does a lunge attack, and the pressing the left trigger does a backslide. Instead of selecting one spell to take into battle the player has access to all accumulated spells, including new spells that weren’t in the original. Some of the bosses behave differently and different tactics are needed to beat them. The boss of Act 1 of Aitos is one of the more noticeable changes. The level layouts are mostly true to the original version, but design liberties have been taken, introducing new pathways.

Actraiser was never the most difficult game and Renaissance makes the challenge easier. There are different difficulty levels that can be switched at any time, but anyone looking to be challenged should consider playing it on hard. Magic points were originally found in the simulation portions, but that’s no longer the case. Each Act has three scrolls hidden that increase the Lord’s MP by ten points. These can be found easily, but Acts can be replayed at any time if you miss any. In the original it was encouraged to kill every enemy and not die since the score of the Act determined an area’s maximum population. This isn’t the case here, but each killed enemy and most destroyed environmental objects drop crystals. Accumulating these crystals will result in five different bonuses that start at 20 percent attack boost, 20 percent magic boost, 50 percent attack boost, 50 percent magic boost and lastly 100 percent attack and magic boost plays resurrect on death one time at half health. The checkpoint system is forgiving too. 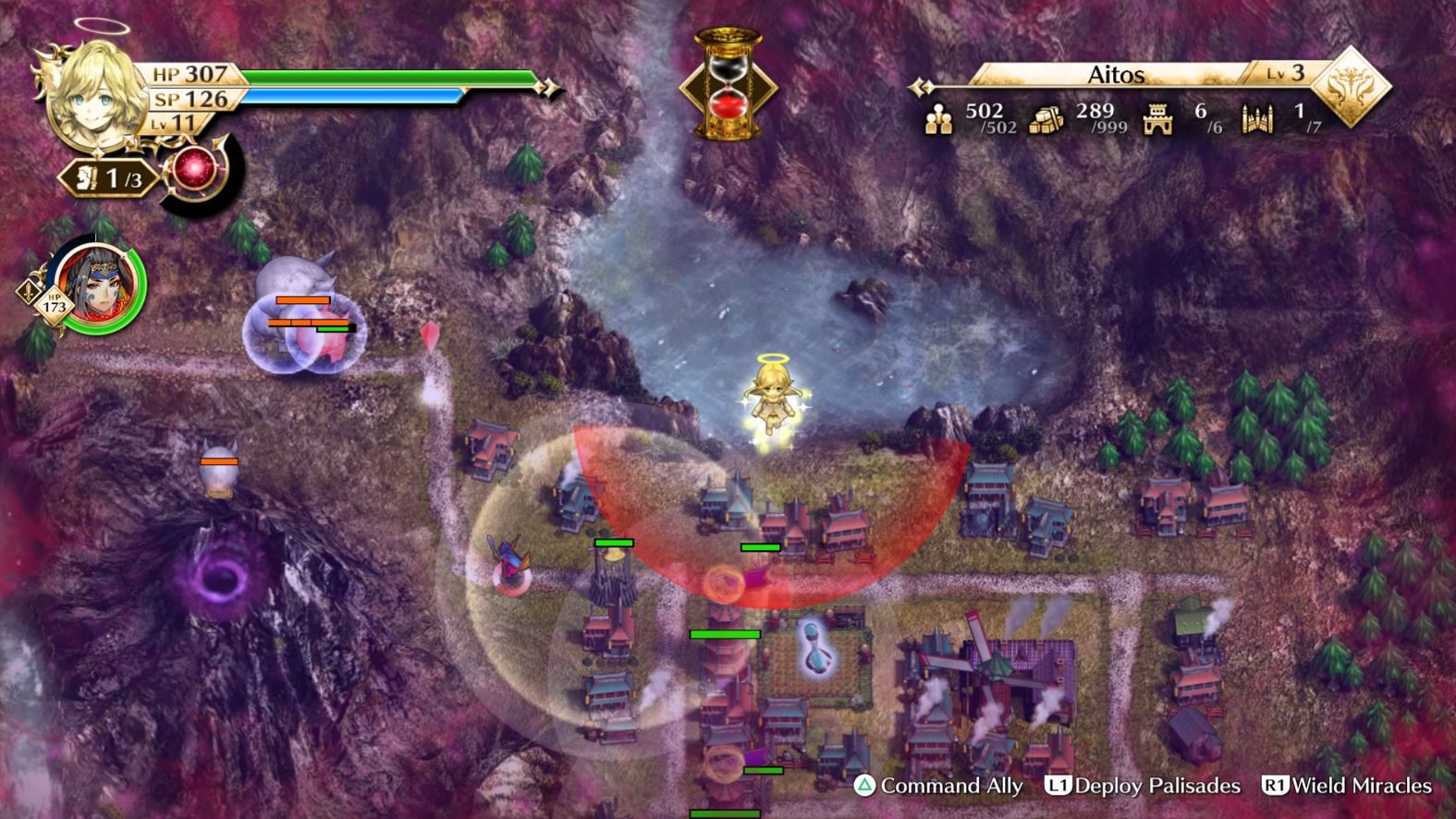 The simulation portion was fine thirty years ago due to limits in technology. The developers of Actraiser Renaissance wanted to give the player more value by greatly expanding on the storytelling elements and content within the simulation, but they may have gone overboard. In the original the simulation portions did take longer than the action portions, and the ratio has been exponentially increased in the remake. The storytelling is fleshed out a lot, with a much greater number of dialogue sequences between the angel and villagers. Legendary heroes have been introduced in each area, which also have been worked in the plot, but their primary function is serve as warriors in the new RTS/Tower Defense battles that now frequently occur. Each area also adds more of the side-scrolling combat. Whenever a monster lair is sealed, the Lord of Light needs to go into himself and destroy the Spawner. These are small areas that take less than two minutes to complete, but it does add more hack and slash combat. In the original the player’s level was determined by population, but in Renaissance experience is earned through quest completion.

The changes and new content to the simulation content aren’t inherently bad, but they do seem excessive. Every few seconds whatever the player is doing is interrupted by some sort of dialogue sequence, usually the townspeople requesting something. Some of their requests, like build six workshops, are things the player has no control over aside from just directing the people to build the town and wait until they build six workshops. In order to complete the simulation portion to unlock the second Act there are several Tower Defense battles that need to be completed. These seem cool at first but become a chore before long. The majority of them don’t offer much a challenge, but there are a few that take some effort. Before these sequences the player can put different forts around town to fight the attacking monsters. During these sequences the angel takes on a passive role and can’t use his bow and arrows. The player can direct the champions around the map to defend against the monsters, put up palisades to slow their advance or use miracles to directly attack them. SP restoration items spawn slowly and it’s easy to deplete the SP supply quickly in these sequences. The monsters appear and travel in predetermined paths so if you get stuck on one of these an easy fix is usually to just move your forts around or change Gatehouses to Mage Towers. The Tower Defense sequences are basic and a moderate amount of fun, but they would be been a nicer addition in smaller doses, especially since the player is so limited in how much they can actually do. 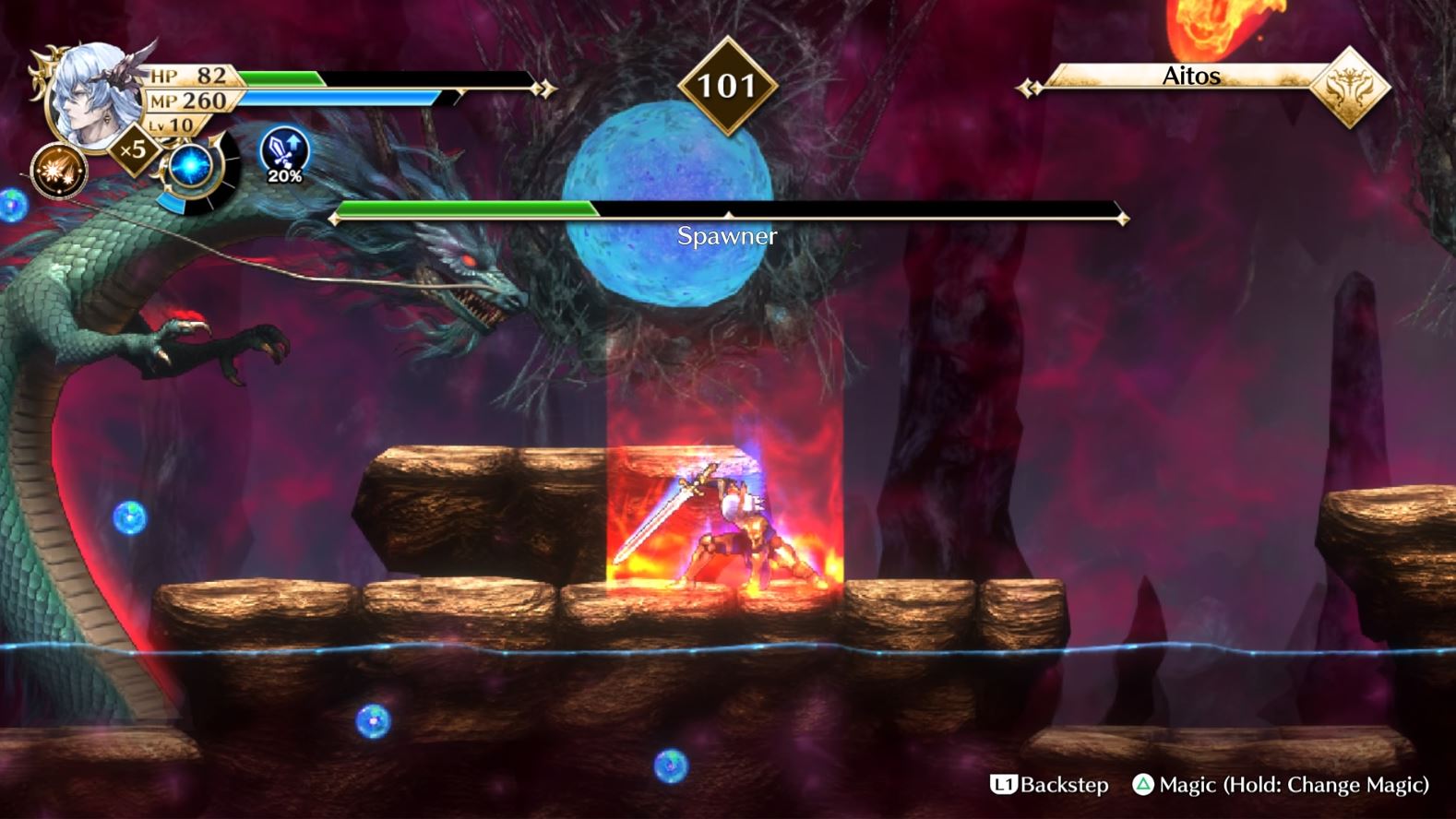 Maybe it’s because Actraiser is a personal SNES favorite, but despite feeling that the additional content felt like quantity over quality, I thoroughly enjoyed playing Actraiser Renaissance. Some of the simulation quests dragged on too long, especially since there were quite a few of them where nothing can be done to complete them except wait for the Workhouses to generate enough resources or the fields randomly generate enough food. Knowing how short the original game and limited by the day’s technology they did need to do something to expand the simulation portions of the game, but that section went from not enough content to too much padded content without hitting the Goldilocks sweet spot. The action sequences on the other hand are an across the board improvement. Having access to every spell in each level is a nice change, while the additional attack moves modernize the feel of combat. The Acts felt like a contemporary take on the original which is what fans would want. The simulation portions were still enjoyable, and while the new content was generally good, each area dragged on about 15-20 minutes too long. Making the Tower Defense sequences more engaging or being less dependent on randomly-generated quest items would have helped this.

On a technical level Actraiser Renaissance is a budget title and one shouldn’t expect AAA graphics, but what we do have is a beautiful game from an artistic design perspective. The Acts are re-imagined versions of the classic levels and monsters that are updated for modern platforms that should be pleasing to fans of the original. The simulation graphics also showcase beautiful landscapes. The angels, monsters and people have a more anime art style to them. The music has been remixed to sound higher quality and more contemporary, and each of the regions simulation area has its own music. But for purists the option to play the original 16-bit soundtrack can be played instead. 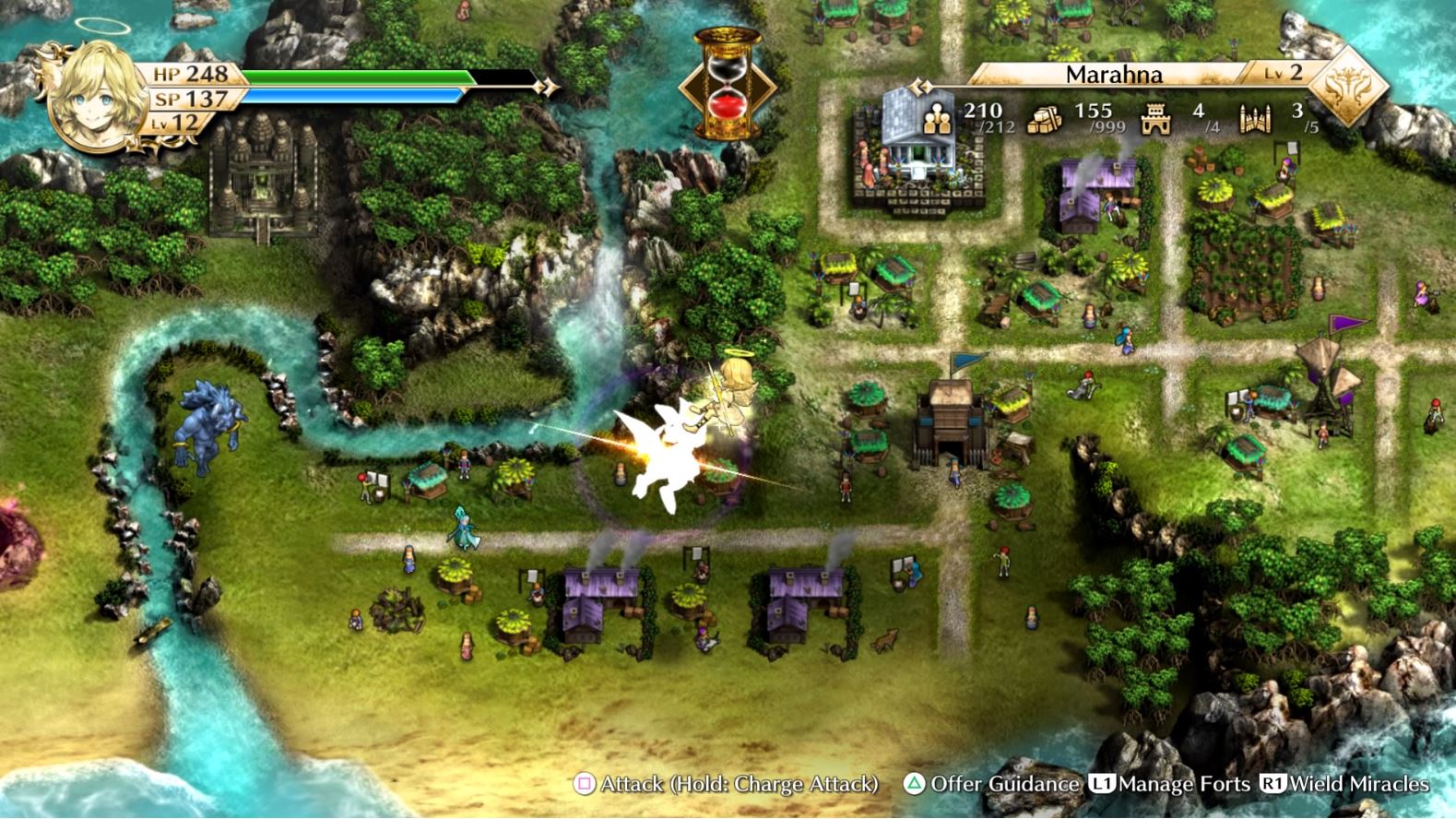 Actraiser Renaissance is a worthy reimagining of the thirty-year-old classic. The action sequences were updated to look and feel modern while still retaining the essence of the original. The simulation portions were greatly expanded with mixed results. Given the brevity of the original game this was a wise decision, but it often feels like the developers went overboard and padded the experience more than was necessary. The Tower Defense portion is an interesting idea, but it’s implemented in a way it’s almost a spectator event that occurs more frequently than it should. The new additions of the legendary heroes also feel tacked on and don’t mesh with the tone. In a nutshell, it does a great job of improving and respecting many elements of the source material, but adds too much filler content. Actraiser Renaissance is far from perfect, but it’s a must play for fans of the SNES original.