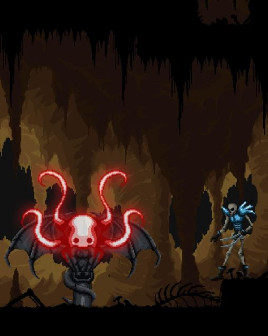 People attend funerals for a number of reasons. Many go because they believe in life after death and wish to witness the last rites being performed to ensure safe passage into the hereafter. Others go to pay their final respects, though it would be nicer to show someone they are loved and respected when they are alive to appreciate it. Or maybe they go for reasons unrelated to the deceased, but for themselves to seek closure on the loss of a loved one. These are valid and socially acceptable reasons to attend a funeral, but the real reason one should attend a funeral is to make sure the corpse stays dead. No one attended the funeral of the amnesiac bonehead protagonist of After Death and thus he is free to rise from his grave and  traverse the labyrinth he is in to open a portal and regain his memory.

As the title implies, After Death begins after our nameless protagonist, who shall henceforth be referred to as Mr. Bones, has departed from this mortal coil. He wakes up in a strange world, with his identity, history and cause of death being a mystery, lost in a fog of amnesia. This world he is in is a bit of mystery itself, but thanks to the guidance of one of the many wandering souls that have a penchant for possessing gargoyles tells Mr. Bones of the existence of a portal that can teleport him out of this hostile place, provided he can best the fourteen powerful beasts aka boss monsters that claim dominion of the various locales.

To describe After Death in its most basic form it is a good old fashioned 2D metroidvania. Getting a little more specific but still being vague by comparing it to other games our readers may or may not have played, imagine a heaping dose of Castlevania: Symphony of the Night being dumped into an indie game blender. Add some of the aesthetic and tongue in cheek humor from MediEvil and sprinkle on just a little bit of flavoring from the 1989 Shadow of the Beast. What we get is a modern take on a 16-bit world that Mr. Bones needs to explore, gradually gaining access to new areas by acquiring new items and abilities. In addition to fighting myriad foul creatures there is quite a bit of platforming involved, but that is not a major impedance as Mr. Bones is pretty spry (for a dead guy). 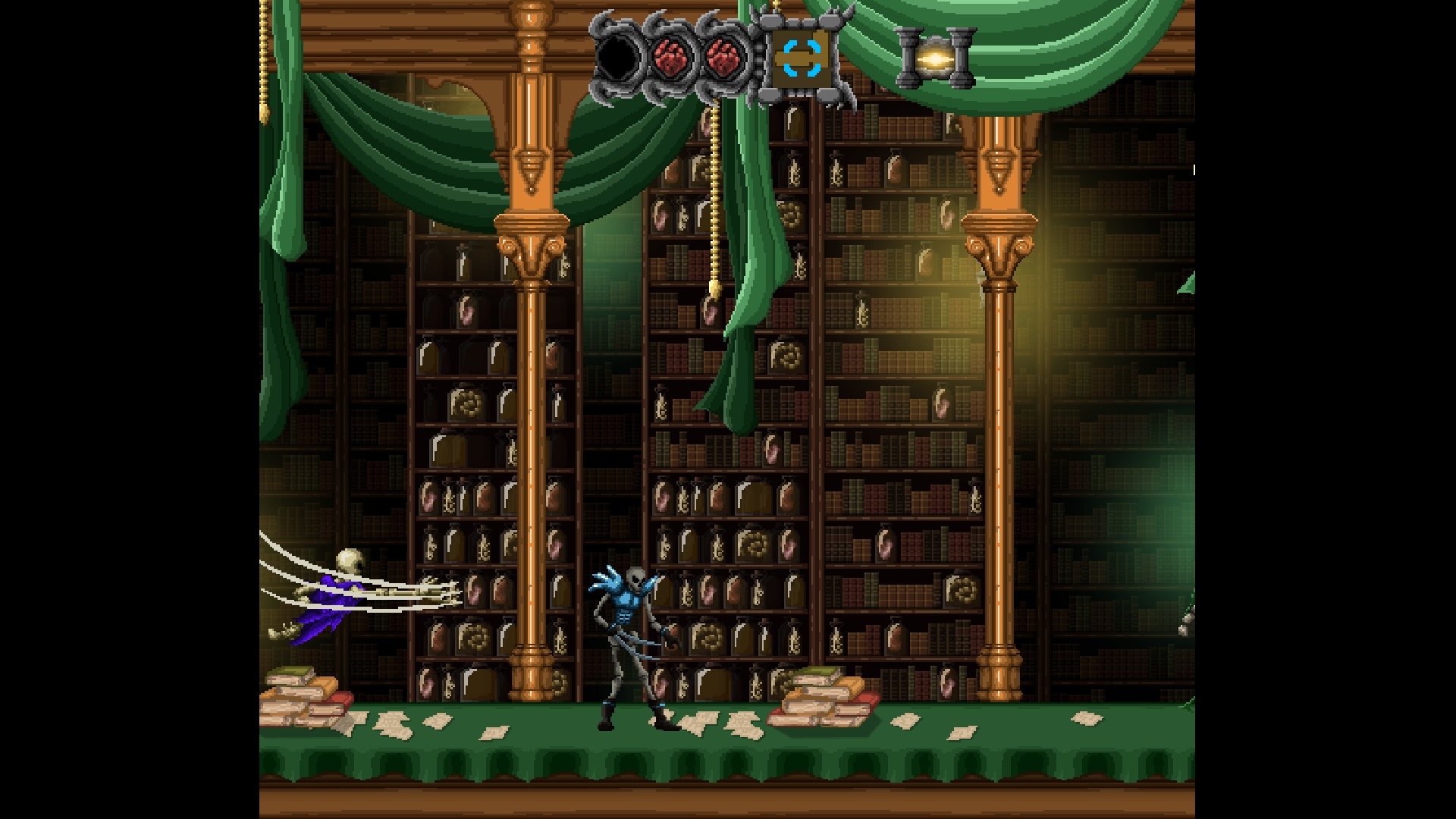 Like a proper metroidvania, Mr. Bones has access to only a tiny portion of the world at the beginning and is pretty weak and useless. As a skeleton, he literally has no muscles so he needs to acquire an item before he put through the barricades that prevent egress to new areas, but without the strength to do that he would be pretty ineffective at punching the odd critters that inhabit this world. The enemy designs are fairly creative, even if they don’t make a ton of sense. A skull atop walking broccoli sprouts or flying walrus tusks are some of the creatures I have identified and named, but the truly impressive adversaries are the boss monsters. These guys require some semblance of strategy to best in combat, and for this type of game are quite impressive in stature, whether it be a giant skeleton wishing to club Mr. Bones with his massive arm or a giant beholder inspired creature that could fit Mr. Bones in its eye socket, the fourteen main bosses and seven minibosses are highlights of After Death.

For a more streamlined experience, there is no inventory for the player to worry about managing and changing equipment. New abilities and powers simply become available at the press of a button when acquired. This all plays into progressing through this twisted world Mr. Bones found himself in. For example, there are many areas early on in the game that can be seen but it is impossible to get there due to there being a large body of water and Mr. Bones is no Micheal Phelps. It’s been established he lacks the musculature necessary for swimming, but also without any fat he lacks the buoyancy needed to float his way past the obstacle. This changes when he gets the ability to turn all water into ice. It may not be as fun at parties as what that other guy who conquered death could do with water, but this is much more useful in accessing new areas by having some solid ice to walk across. 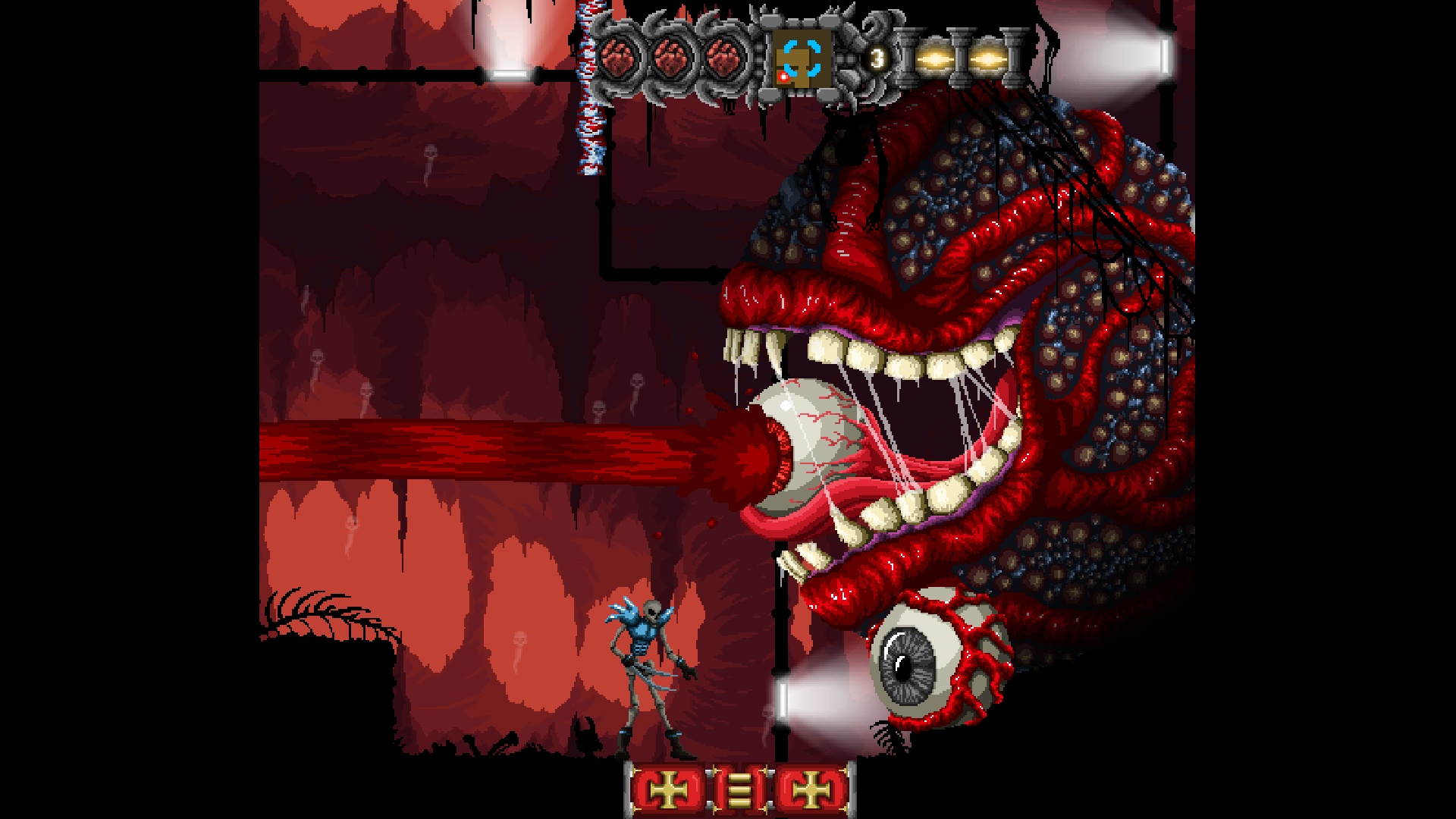 After Death clearly wears its retro influence on its sleeve, but does so in a manner that still is appealing among modern games. The graphics are 16-bit inspired but are done in a way where they aren’t overly jagged and pixelated. An equivalent analysis could be done of the music, where it sounds like what one would hear from a cartridge in the ’80s and ’90s but made with higher quality instrument samples. It still sounds like video game music but less chiptune based than what we’ve come to expect from the NES. The controls are a bit old fashioned feeling though that may be deliberate. Sometimes the pace at which Mr. Bones moves feels on the slow side and finding the sweet spot for some of the platforming jumps requires the player to be more precise than most modern games require. Overall After Death looks, sounds, and plays quite well, and most players can expect to finish this one in the seven to ten hour ballpark.

The biggest criticisms of After Death tend to be more on the technical level than with its design. The game did crash a few times during the review, and while this wasn’t at a level that would render it unplayable the majority of Steam games played for a review did not crash. Also, if I were to exit out of the game by hitting the windows key the game would have to be shut down three quarters of the time when I tried going back into it. Hopefully this is an issue that can be addressed in a future patch. On the same note, the save file would not sync between my laptop or desktop. There are ways around this for people that want to transfer the save file between two computers, but a nice feature of Steam is the ability to play the same game account on multiple PCs and have the save files blissfully follow you to the next machine. None of these issues ruin the game but are annoying nonetheless. 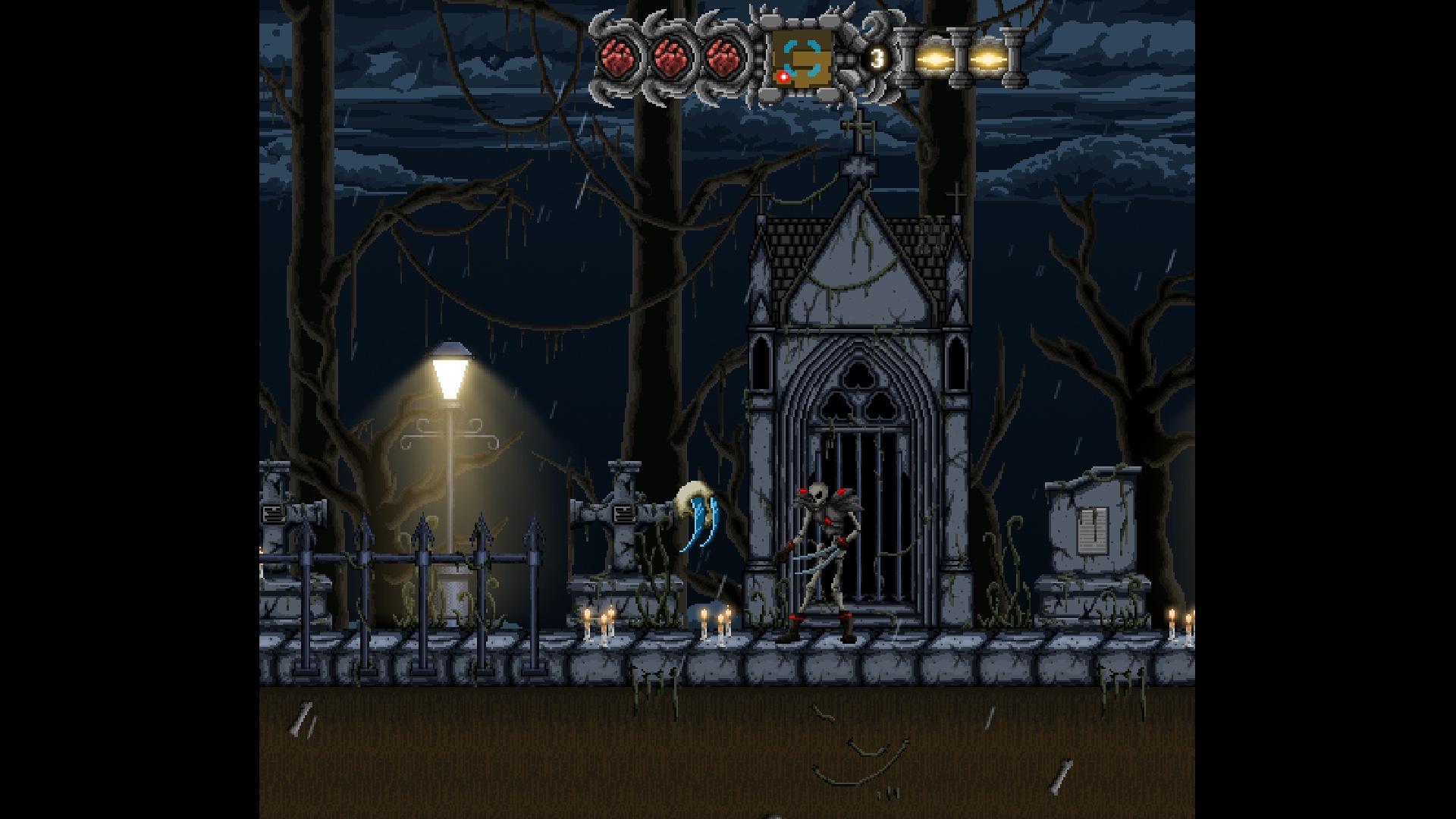 After Death doesn’t revolutionize metroidvanias, but it doesn’t exactly seek out to do so either. It’s simply a development team creating their own world and story in a tried and true format. Its self referential nature regarding the gargoyle statues gives an element of levity to the macabre setting with enough of a challenge to keep the game from getting boring without ever threatening to be frustrating through the varied seven unique areas. The well-designed boss fights are a highlight and the transformation Mr. Bones goes through from a useless skeleton to a force to be reckoned with at the end of the adventure is a satisfying process. After Death is a welcome addition to any metroidvania fan’s game collection.