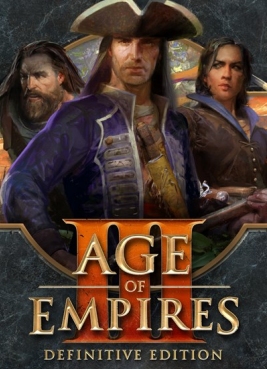 This Definitive Edition brings a plethora of content to new and veteran players alike. As a veteran player, it’s difficult to find something about Age of Empires that I don’t know. I’ve played the games so much, the villager spawn sound is part of my brain matter now. Coming back to the AoE III after a decade, it truly is marvelous to see the graphical overhaul and remastered content. The game is breathtaking and should be praised for its remaster. Additionally, new aesthetic upgrades like particle textures, rerecorded voice acting and a fully-remastered soundtrack help revive the franchise with a fresh coat of paint. Where care and attention to detail can be noticed is in the rework of factions. You’re introduced to two new factions: the Incas and the Swedes. The Inca faction feels balanced where it has its advantages and disadvantages. They can develop at a remarkable pace–allowing players to reach the endgame Imperial Age quickly. Beware fighting against canons, though, as the Inca themselves don’t come across artillery easily without upgrades. Quick, melee and range units can be powerful if opponents are baited into them. The Swedes feel similar to other European factions, but they do bring their own brand of pain to the battlefield. Having some personal knowledge about the this faction, I fully expected to see Hussars in play. This new content delivered and introduced the deadly, light cavalry alongside other Swedish forces. Both continue to bring the penchant for historical reenactment that AoE is known for and they both bring unique units and technology into play. 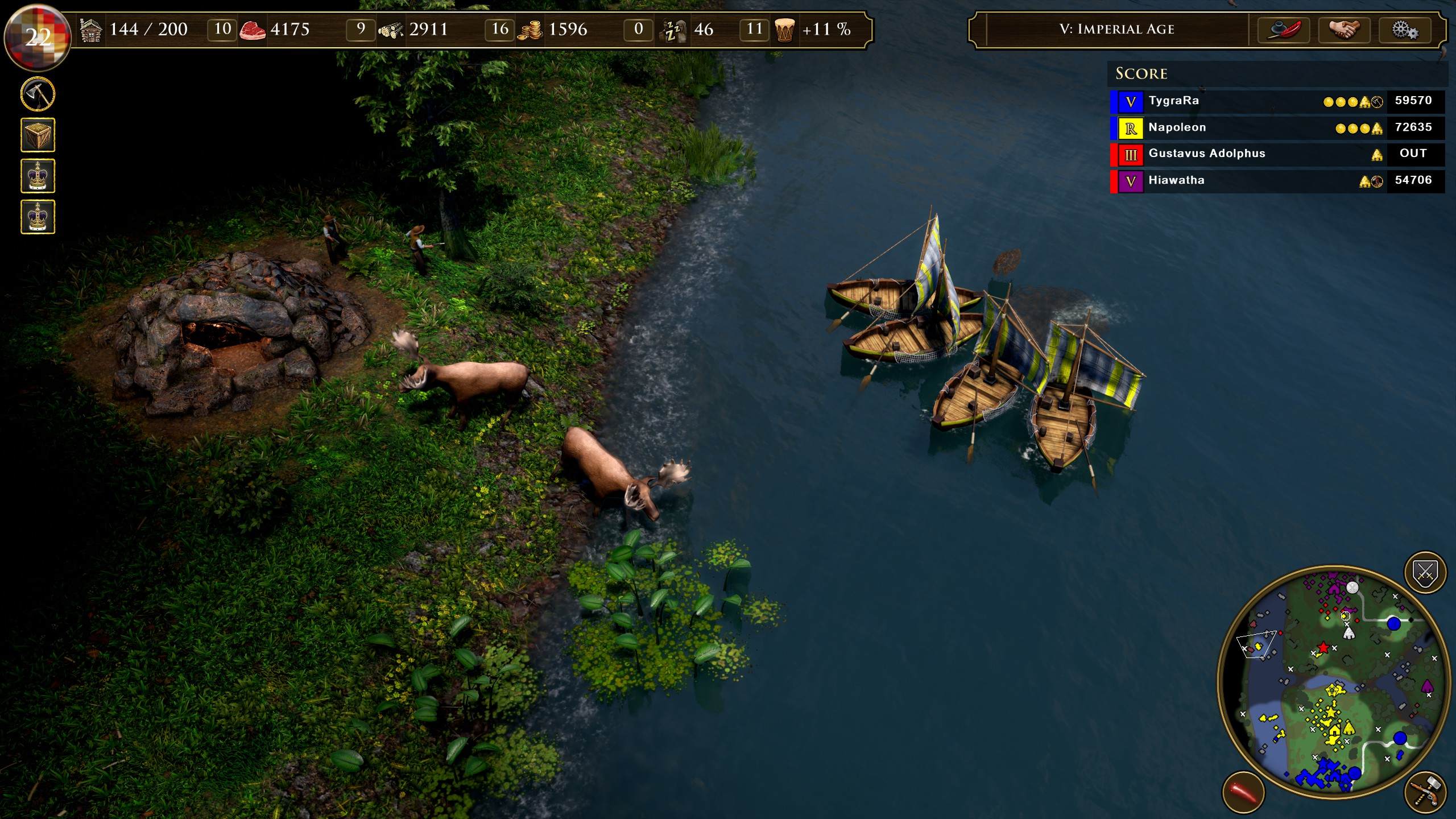 To pay further respects to accurate retellings of history, this title has been rebuilt to more respectfully portray the Indigenous populations that were here before the colonizers. As someone of Indigenous ancestry, I always found it difficult to play any of the Native factions because they were horribly misrepresented. Little details that may not have seemed important to those outside of Native ancestry actually spoke volumes to the rest of us. The original title featured a lot of caricature of Indigenous peoples — like having skull decorations all over their camps or the conception of the “fire pit” mechanic. Where European nations could advance their technology through upgrades obtained through more traditional ways, Indigenous factions had a fire pit that they could dance around in order to advance their upgrades. This is hugely problematic because it continues to uphold the harmful notion of “civilized Europeans” relying on science and technology versus the “savage Natives” relying on spiritual magic that looks nothing like this portrayal. To solve this issue, a community center has now replaced the fire pit and now requires that villagers work together to create upgrades. Further, the work done through partnership with First Nations consultants helped to rewrite major issues in the Native storyline as well. It’s a decision that deserves praise, especially in a game that is so otherwise historically accurate. And, no, I did not specifically hunt for these changes — there’s an immediate pop-up notification of respectful portrayal as soon as you open the game for the first time.

This Definitive Edition also boasts improved quality of life updates made to the UI and gameplay. You’re able to pick a preferred UI set-up, but the Definitive Edition UI you’ve come to see from previous games is optimal. You’re better able to keep better track of units, upgrades and productions. You now have hotkey preset options, even more zoom and scaling options as well. Progress indicators may not seem like a big deal when buildings are working on new upgrades, but these small additions actually help with calculating gameplay in strategic campaigns. As most veterans know by now, there can be quite a bit of strategy involved in AoE. For players new to the title’s winning formulas, the Art of War tutorials are back to give you a crash course in necessary techniques, like rushing and booming. New missions and challenges are available for players to test their mettle, in addition to the other fifty previous missions spanning eight campaigns. To further challenge the old-timers, a new “extreme” difficulty mode has been added in addition to AI updates. Usually, when a game adds new difficulties, I always have to ask if it’s legitimately difficult or if modifiers are added to enemies to just make them tougher — thus more difficult to defeat. Age of Empires III: Definitive Edition, however, has overhauled the AI so that it does make conscious decisions during battle. No longer did I see enemy units throw themselves aimlessly at my defenses. Now the AI can read maps better than before and make important decisions like retreating, flanking or other tactical movements. At one point in a campaign, the enemy AI attempted to lure me into a trap that I would have missed if I hadn’t scouted the area first. I was impressed that the computer now feels like playing against another person. 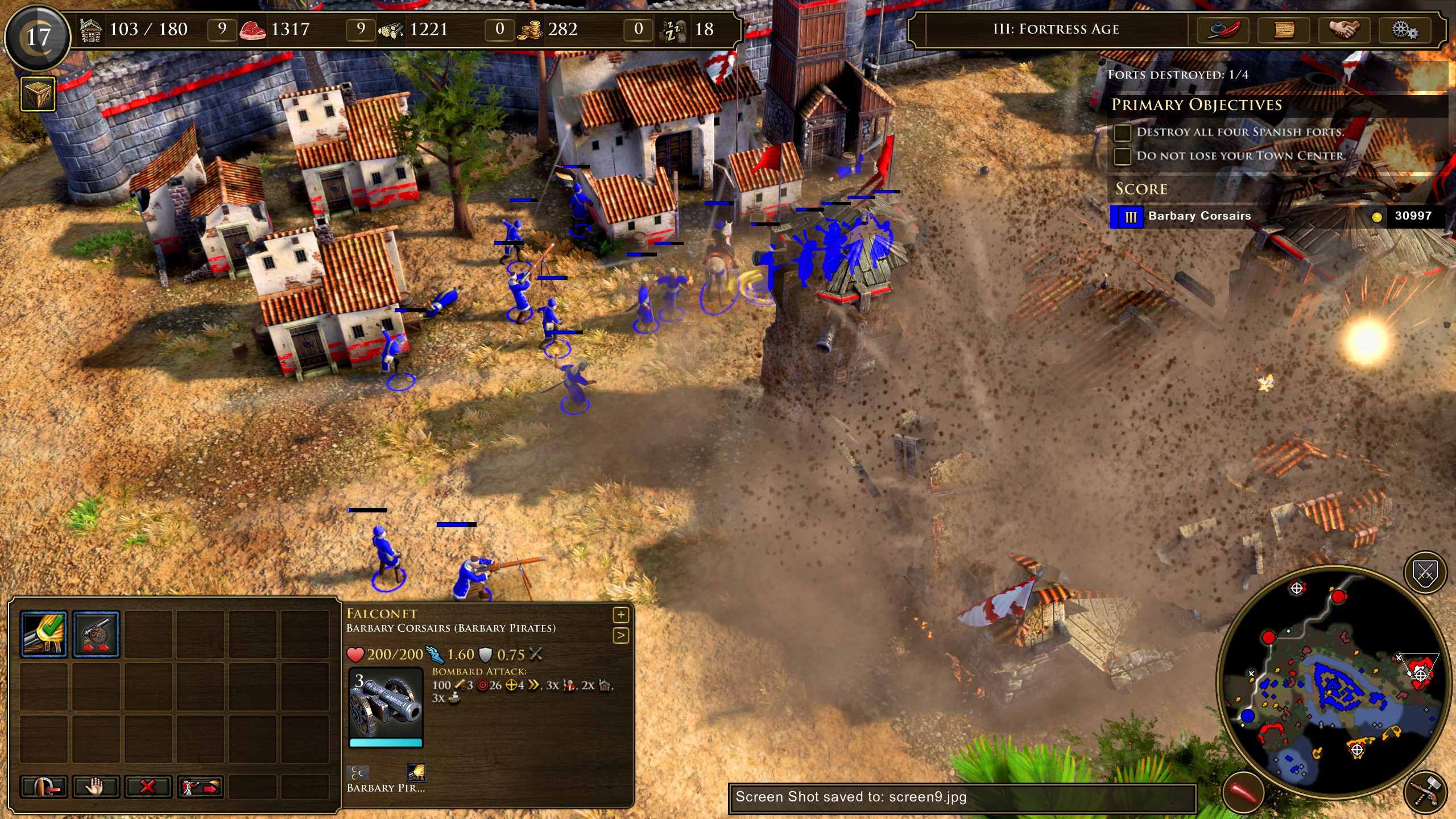 For those looking to test their wits against others, online capabilities have also been upgraded for smoother play. One of the major criticisms of previous Definitive installments was the lack of server support for online play. Other players would be slow to load into maps or even disconnect entirely from the match. There were long queue times because of such overloaded servers. It seems the developers learned from these previous mistakes to create a smoother online experience. While there are connectivity hiccups, it’s not anything a simple day one patch couldn’t fix. With that being said, there unfortunately are a handful of glaring gameplay inconsistencies that affect the overall experience.

Flashback to 2005 — my dad finally got off AoE III, so now I can play (having to share one gaming space with your hardcore gamer dad is a nightmare). There are moments when I play where I scan the field for a minute and there are moments where I’m frantically building, managing units, supplies, upgrades and all the other mechanics. Sometimes you just want to build something quickly, so you just drop the building setup on some available space. Perhaps this space is already occupied by units. What’s usually supposed to happen is that your AI units will move once the building is completed. It’s 2005 and there’s a bug that traps my units inside the building — as if it was built around them. You can garrison units in buildings, but that’s not what’s happening here. Try as they might, they are unable to move. Now it’s 2020. I’m no longer fighting with my dad over the PC, but I’m still fighting the glitch that traps my units. Honestly, when it first happened, I thought perhaps I was just seeing things and it would fix itself. The third time it happened, I almost had to step away because I had to delete twenty soldiers trapped in a building — the poor guys never got to see action. Now we’re down twenty units, so that means taking time and resources to rebuild those soldiers. While this at least occurred during a time when my resources were plentiful, having this occur when those twenty soldiers are your last defense in a decisive battle feels awful. While this is the most concerning of bugs, the title also suffers from similar glitches where villagers get caught on the sides of buildings so they never get to their designated location. Additionally, in battle there’s sometimes a glitch that makes it impossible for you to target specific enemies that may have overlapping hit boxes — I encountered this glitch during a particularly painful naval battle. These bugs are unfortunate and can be looked over, but it can negatively affect gameplay when they occur with some consistency. 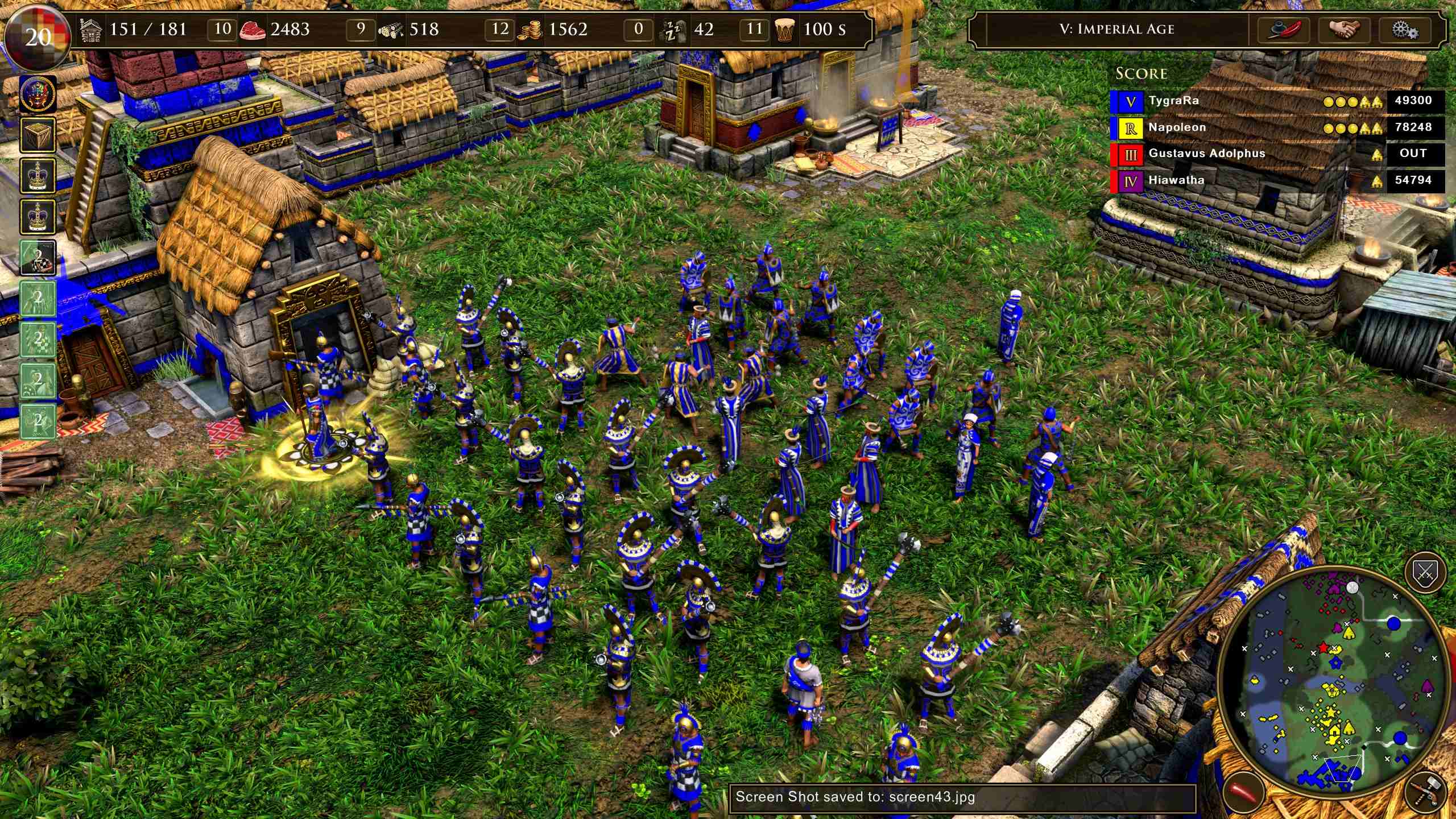 Age of Empires III: Definitive Edition is the remaster the game deserves. The overhaul of aesthetics in gameplay make it look better than it ever has. This Definitive Edition comes supersized with all the previous game’s content plus new missions, campaigns and factions. The new additions are fully developed and integrate masterfully with the base game. While the game is beautiful to look at and still holds true to the formula that makes AoE such a great franchise, it’s also riddled with frustrating glitches and inconsistencies. While I’m sure a post-launch patch will be released to add fixes, players will have to deal with these inconveniences in the the meantime. Age of Empires III: Definitive Edition, however, does justice to the franchise by recognizing its flaws and working towards a better product. The collaboration with Indigenous consultants helps it regain its dignity by providing historical accuracy. Through these collaborations, developers were also able to solve gameplay issues that plagued all fans of the game. Age of Empires III: Definitive Edition is by no means a perfect product, but it perfectly honors the spirit of the franchise.