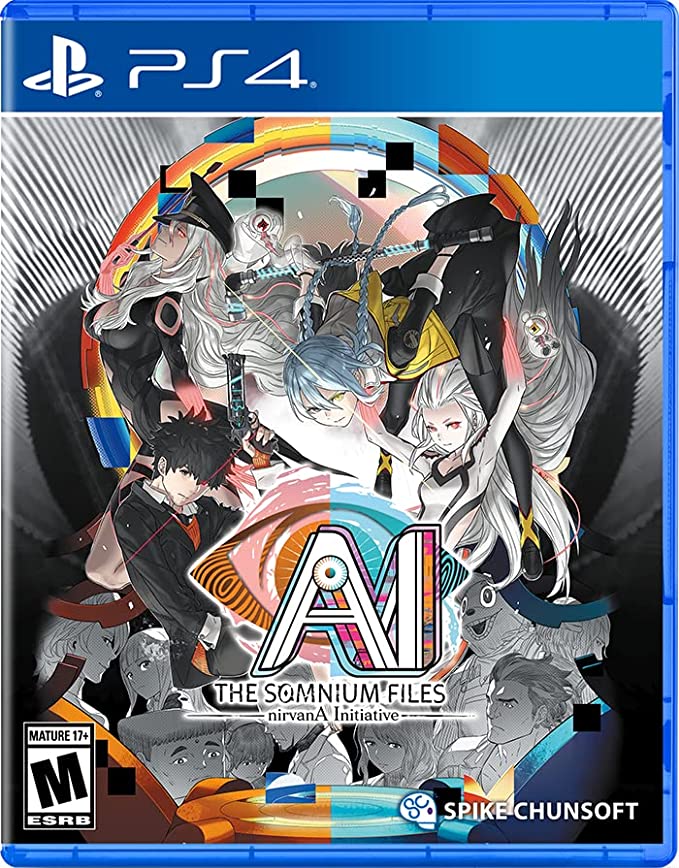 Back in 2019 players were introduced to AI: The Somnium Files alongside a colorful cast of characters that ended up creating a memorable murder mystery. It felt like it could have stayed as a one-off adventure title that still offered a good amount of replayability to go back to, so it came as a surprise when a sequel was announced. There was no shortage of excitement to see where the story was going to continue from or branch off of in this new entry with new and returning characters, but the ultimate question is how well it stands up to its charming predecessor and how well the two titles work together. Is AI: The Somnium Files – nirvanA Initiative all its cracked up to be or does it end up faltering on the way out the door?

It should go without saying that there will be minor spoilers for the first title regarding the story. Although the first title isn’t required to enjoy the sequel, it’s recommended to get a more fulfilling experience overall. The story of Nirvana Initiative follows two protagonists this time around including Mizuki, a returning character from the first entry, and a young man named Ryuki who both work for a hidden organization known as ABIS. Ryuki’s playable portions take place in the past while Mizuki takes the lead in the present in this branching path scenario. The core story follows a mysterious murder when individuals begin showing up having their bodies sliced perfectly in half. This case ends up never being fully solved at the time Ryuki was trying his best to uncover the truth, and six years later in the present the other half of various bodies begin re-appearing under mysterious circumstances. Seeing as the original killer was never caught, it’s left up to Ryuki and Mizuki to uncover clues from the past and present to find the answer that everyone is looking for.

Most of Somnium Files‘ gameplay is spent doing things similar to those familiar with visual novels or adventure titles that focus on mysteries. Exploring areas, examining items, speaking with people to gleam more information before eventually moving along to the next area and repeating the same process. These titles mix things up to a helping hand or eye that each of the protagonists has access to. Ryuki travels with an AI-ball known as Tama while Mizuki has access to Aiba, who was met in the first title. Both of these AI-balls have the ability to communicate and help the protagonists see more than normally capable of the average person. This includes x-ray vision, thermal vision and the new ability to Wink Sync and briefly see into a person’s mind to see what they’re thinking about. There are also a good variety of scenarios that include quick-time events, but the time given is generous and can be made easier in the settings for those who don’t want to feel stressed by the brief time limits. All of these abilities come into play when investigating to learn more or help find clues about what’s going on while on the prowl for more information. This of course is build up for when the protagonists need to get even more information, in which they need to make use of Psyncing with another person in order to enter a Somnium. 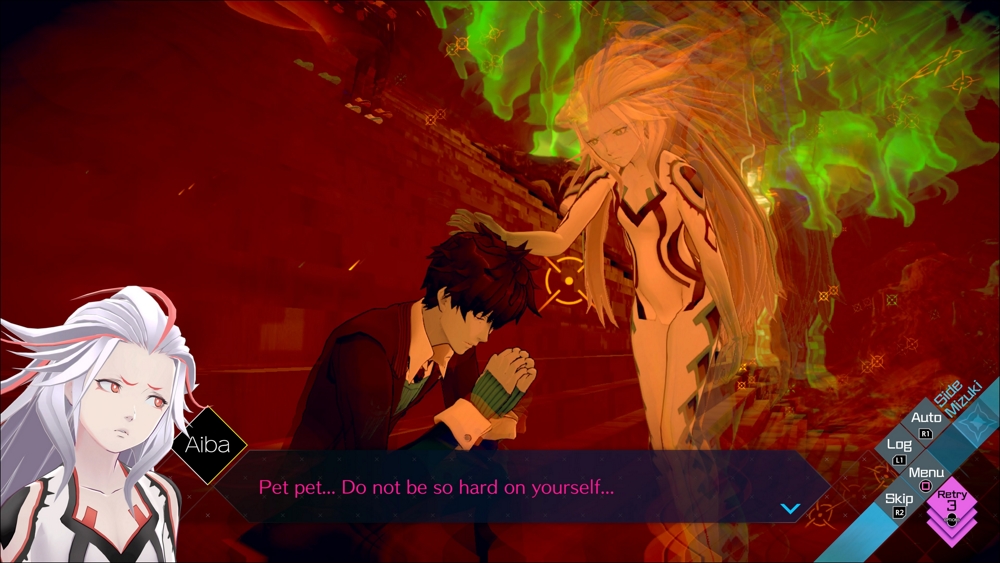 Somniums are the core puzzle-solving experience in both the first and second titles of this series. It involves the protagonist going deep into the dreams of whoever they need information from and learning more about them and what they may be hiding or unable to speak on. These create bizarre and unique worlds that allow Aiba or Tama to explore at the command of Mizuki or Ryuki respectively. They’ll then interact with various objects available to them, performing actions that allow them to delve deeper into a person’s mind and unlock what it is that stands in the way of progress. The main catch is that they can only remain in the Somnium for six minutes, but time only progresses when actively moving or interacting with objects. Certain activities will also decrease time,  but this can be countered by collecting items called Timies that allow the time to be decreased or occasionally increased in dangerous scenarios. Although the mechanic itself is similar to the first title, Nirvana Initiative’s Somniums feel much more straightforward with considerably less random shenanigans at times. There’s also a slew more variety in the scenarios leading to no two Somniums feeling the same and offering a lot more reason to go back and investigate things that were overlooked or skipped the first time around. This also isn’t the only way players can enjoy exploring areas as Nirvana Initiative adds an entirely new way to enjoy investigations without a bizarre time limit.

Sometimes there just isn’t enough time to fully investigate a crime scene, or at times the protagonists wish they could go back and look at it again. Fortunately, they’re in luck, as both Tama and Aiba come equipped with a brand new ability to create a VR recreation of various places they’ve been or currently are at that allows them to investigate in even more detail. It also often leads to characters setting up a step-by-step recreation of how the event may have taken place. This often leads to needing to solve various puzzles while Tama or Aiba records it movie-style for extra added effect. This is a nice way to involve more of the real world areas and investigate in brand new ways outside of the usual point and click shenanigans. It’s also just nice to be able to physically run around as Ryuki or Mizuki for a while, as they’re typically the one watching everyone else move around. 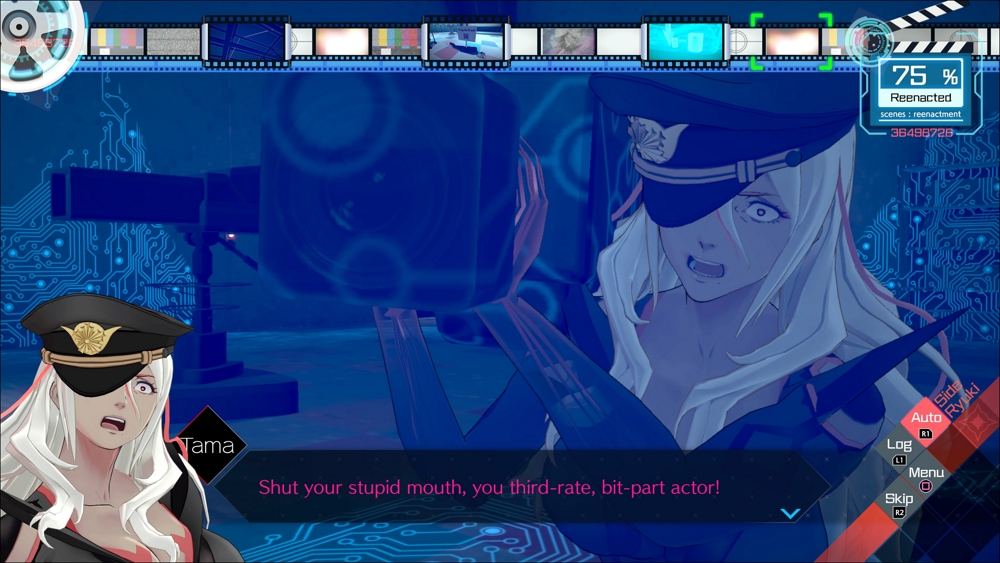 For those who might be tired or need a break from the murder mysteries, there are a couple side activities that can be accessed in the menu for a break. The first is simply a form of information, but enjoyable to read through nonetheless. The files are a record of characters and terms found throughout a playthrough that often offer extra details or insight into things learned along the way. This also often includes slang used so those who might not be in the know can check out what something a character said meant if they missed the reference. This other is a room featuring Tama or Aiba where the character or player can interact with them to have brief exchanges. This is also where purchased clothing can be given to them to wear, although it’s worth noting the set outfits will only appear in previously completed sections of the story. Outfits are unlocked through purchasing them with eyeballs obtained through the Somnium. Although it will require getting in-game accomplishments in order to unlock all the outfits, making it a completion reward in many ways. There’s also a little minigame featuring creatures called eyeballies. These creatures want to have a question answered every twenty minutes and depending on how the question is answered, it will cause them to grow in different ways. This allows them to evolve into unique eyeballies that are a bit like Tamagotchi but only stick around once fully grown before disappearing and resetting at the start. They’re a fun little side activity to detract from the otherwise serious story that are fun to collect and allow unlimited play once the story has been completed.

The most important element of Nirvana Initiative is its story first and foremost. It’s the driving force that keeps progress moving, so just how well does it succeed? Brilliantly, in nearly every regard. The mystery is fantastic, the clues are set in place for attentive players to figure out things early, things move quickly without feeling rushed to allow constant momentum. It also does a brilliant job feeling like a proper sequel without forcing too much knowledge of the first entry in order to understand everything going on, although it would still be recommended to check out the first title before hopping right in it can be fully enjoyed on its own. The music is utterly fantastic and fitting of every scenario while the voice acting is some of the best found in any visual novel adventure out there with an endearing cast that’s hard to get tired of. The visuals are also a delight and any time there’s a fully animated cutscene, it’s always tons of excitement while being fun to watch and partake in. While it’s all around visually similar to the first title, it’s still one of the most visually charming in the genre which makes it stand out and be even more memorable because of this. 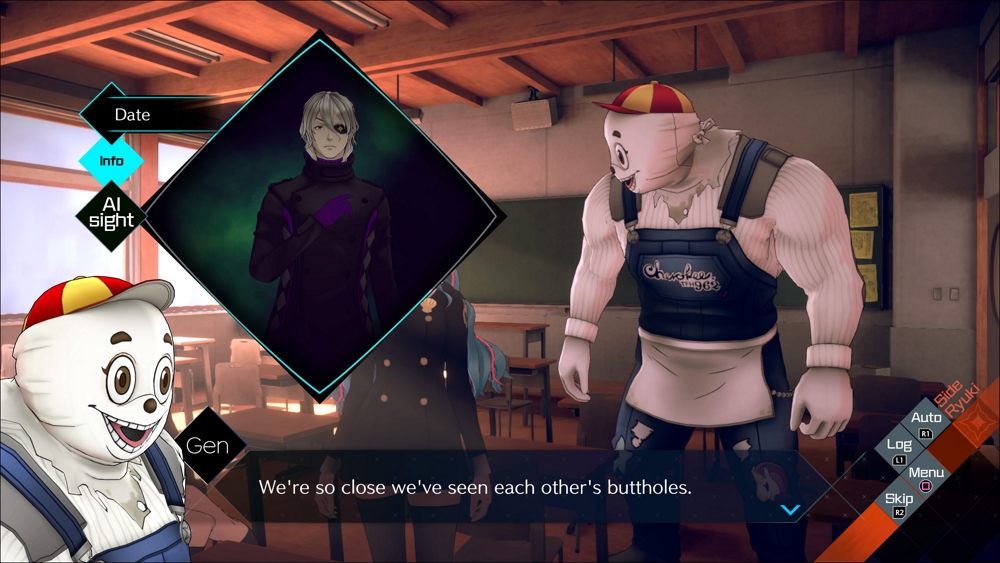 The original Somnium Files was a delight in every way and Nirvana Initiative follows that up without missing a beat. It’s hard to even say which one could be considered better because they both manage to nail exactly the sort of narrative and approach they’re going for. The characters and story are the life blood of an adventure title and they knock it out of the park here. Fans of the original will want to see where the story goes and pick up this sequel. It’s accessible to newcomers, but we’d still recommend checking out the first entry if only because it’s a brilliant story that also shouldn’t be missed out on. Much like the original, AI: The Somnium Files – nirvanA Initiative is an innovative take on the genre that must be experienced and is well worth picking up.