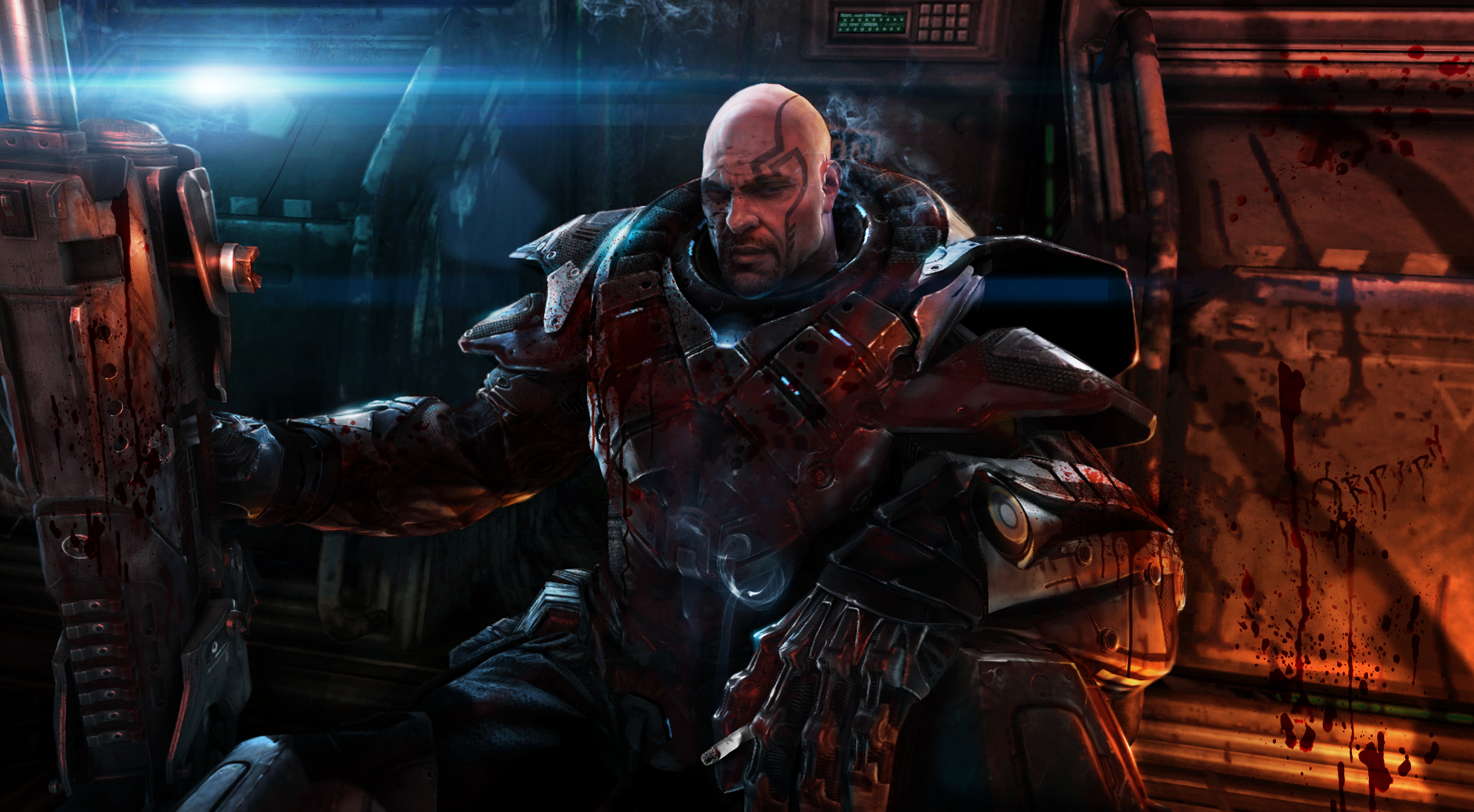 Alien Rage is a run and gun type shooter that has more in common with the old Doom or Wolfenstein games than most modern shooters. There is certainly some mindless fun to be had here, especially if you are looking for a shooter that isn’t asking you to think. There are no puzzles, no quicktime events, and the game doesn’t really ask anything of you other than shooting everything that moves or thinks about moving or might possibly move some day. Once the initial adrenaline rush fades, however, it quickly becomes apparent as to why all those old shooters decided to adapt in the first place, as level after level of redundant action and repetitive encounters ultimately drag the game down. Without any interesting ideas or a unique aesthetic, Alien Rage ends up feeling like several different kinds of generic.

If I told you this game featured a burly space marine fighting aliens, I’m nearly positive that you could put together the rest of the plot by yourselves. The Earth Federation of Vague Global Importance and some alien race both land on an asteroid and want its extremely important supply of Super Mega Energy Source X that will solve everyone’s problems. While things start out splendidly, the aliens decide to stop playing nice for some reason and kill all humans so they can keep the energy source for themselves. Since the aliens have already wiped out all the humans that were on the asteroid (including a huge amount of soldiers), Earth decides the situation would be best handled by sending in a single super bald super macho marine to go in there and blow stuff up. No, that isn’t a joke, and because Earth is now run by five year olds, they want someone to go in there and stomp on all the equipment because if we can’t have it then no one can. 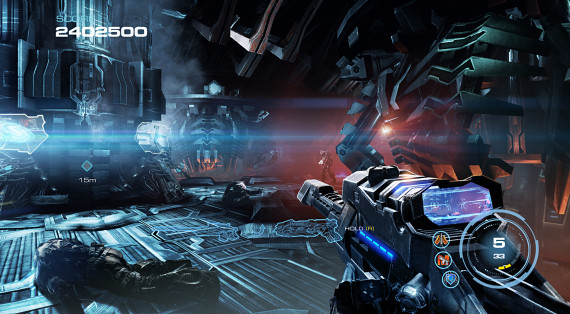 The story is barely there, and was clearly constructed by some guy on the back of the napkin on his way into work to serve as some reason to chain together all the alien shooting you do in this game. The main character and the people he communicates to are all about as likable as paper cuts and have personalities only somewhat more complex than angry bears. They make joke after insufferable joke as you make your way through the game, and the quips remind me of the old Duke Nukem games except without the irony and even less wit. There is some “twist” about halfway through that shows oh man, things totally weren’t what they seemed at first. At least, I think it was supposed to be a twist. Everything is telegraphed so explicitly that I had pretty much figured out the whole plot around the time you pick up your second audio log. The backstory to the event is told through a series of audio logs you can find laying around the ship, causing you to break the action to listen to someone drone on about something that isn’t even interesting enough to care about in the first place.

Fortunately, the combat is tolerable and the fast paced action and nonstop shooting almost salvage Alien Rage into something enjoyable. This is definitely in the vein of an old school shooter, with an emphasis on constant action and blowing things up. The all important energy source you were sent there to destroy is laying around all over the place in big gallons of explosive canisters, just begging to be shot. Enemies are either completely oblivious to where they’re walking or have a death wish, because they have no problem wandering right next to one of these canisters and snuggling up tight as you shoot at them. There is a nice assortment of weapons, although most of these are fairly standard shooter fare. You have your shotgun, your machine gun, your sniper rifle, and a couple of other more interesting weapons that still don’t really break any new ground. Each weapon has a secondary fire mode (which is usually some form of explosive), and there is at least enough variety between all the weapons that they are useful in different scenarios. For a while, the constant stream of enemies with death wishes and a nonstop barrage of bullets is enough to make Alien Rage fun. 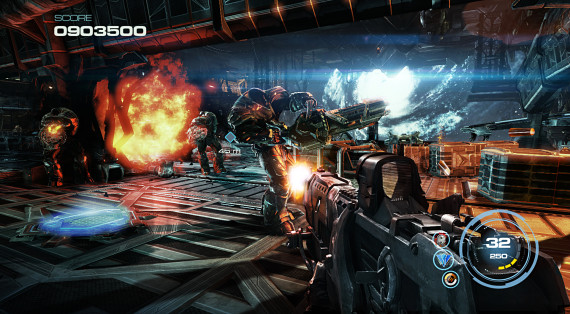 Unfortunately, the initial shine soon wears off and you will quickly remember why people stopped making shooters like Doom years ago. The AI is basically non-existant and their strategy never gets more complex than running right up to you and trying to shoot you in the face. There is cover all over the place, but I never had any idea if they expected me to use it or not. You can’t even really use cover that well, as there is no way to stick into cover, and for the most part you just sort of hide behind a box and hope they don’t shoot you. Enemies might hide behind cover for about a second, but they quickly grow impatient, jumping up and down and screaming about how they want ice cream, and darting out from cover to run right up to you within a few seconds. There is one type of enemy that is occasionally invisible and can stun you with a physical attack, so it at least makes sense as to why they are so antsy to get up in your face. The other guys have guns though, and running right up to the huge angry man that also has a gun might not be the best bit of strategy. They remind me of watching little kids play soccer, where they all just immediately run up to the ball while the coach sits on the sidelines shaking his head and eating all the orange slices.

Both the level design and enemy design are also disappointing, and everything just sort of blends together in a big mess of “I can’t even remember which level is which”. It was after like five consecutive levels of metal corridors punctuated by corpses and fire that I began to seriously worry about if something happened to the level editor. Whoever it was clearly got through about half a level and disappeared, and the other staff were forced to cover it up by stretching out the ten minutes of work they did through the entire game. Even when the game opens up a bit in the middle portions and throws in some slightly different environments, you’re really just trudging through linear corridor after linear corridor and shooting whatever you find.

Enemy design isn’t much better, and while the game boasts of a variety of enemies and bosses there really isn’t that much difference between the majority of them. A lot of them just carry a different weapon that they run up to you with, and strategy really doesn’t vary from encounter to encounter. I did love the jetpack enemies, because not only do they attack in a fairly unique way, but their after death ritual of flailing around, flying off in a random direction before exploding always made me laugh. What enemies lack in quality, however, they more than make up for in quantity, as you can almost guarantee as soon as you kill one three more identical soldiers will run out of nowhere to stand in his spot. The bosses are slightly more impressive, although none of them have enough originality to be particularly memorable.

The game is also quite difficult, which was something I enjoyed, but will most likely turn off most casual fans of the genre. I love a good challenge, and even on the easiest difficulty you can be overwhelmed by three or four guys if they run at you all at once. You don’t have a ton of health, and it is nice enough to regenerate on its own so you don’t have to go around hunting for health kits in every little crevice. Reaction time needs to be quick, because the amount of time it takes for one enemy to multiply into five is only slightly longer than the time it will take for them to drain your health. Checkpoints are fairly forgiving, so even when you die you usually get thrown right back in the action to seek vengeance. I did end up developing a method of running back into a corner and waiting for the enemies to pop up one at a time that makes many encounters fairly trivial, and this is another instance where improved AI would have substantially helped the final product. 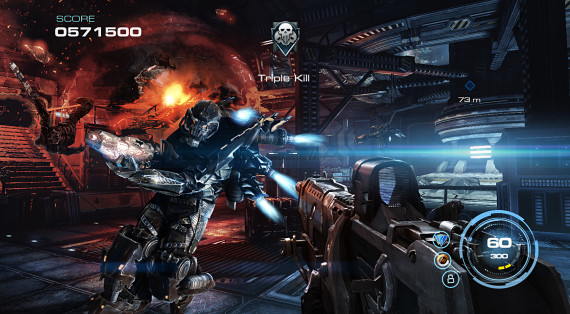 Alien Rage is essentially the generic marine alien shooter that we’ve all grown accustomed to over the years and really has no aspirations of being anything different. It feels a bit like the picture that comes with the frame and if there was a default program installed on computers called “alien shooter – marine demo,” it would be indistinguishable from Alien Rage. There is a bit of mindless fun to be had here, and I’ve certainly played worse shooters over the years. Unfortunately, poor enemy AI, mindless and repetitive environments, and a laughably generic story cause the game to fizzle out well before it’s over and it makes even getting to the end of the game a struggle. The low price point might make this an appealing way to kill a weekend for someone looking for a brainless shooter, but I’d recommend looking for something with a bit more originality, like an indie game or a remake or a photocopy someone made of a photocopy.