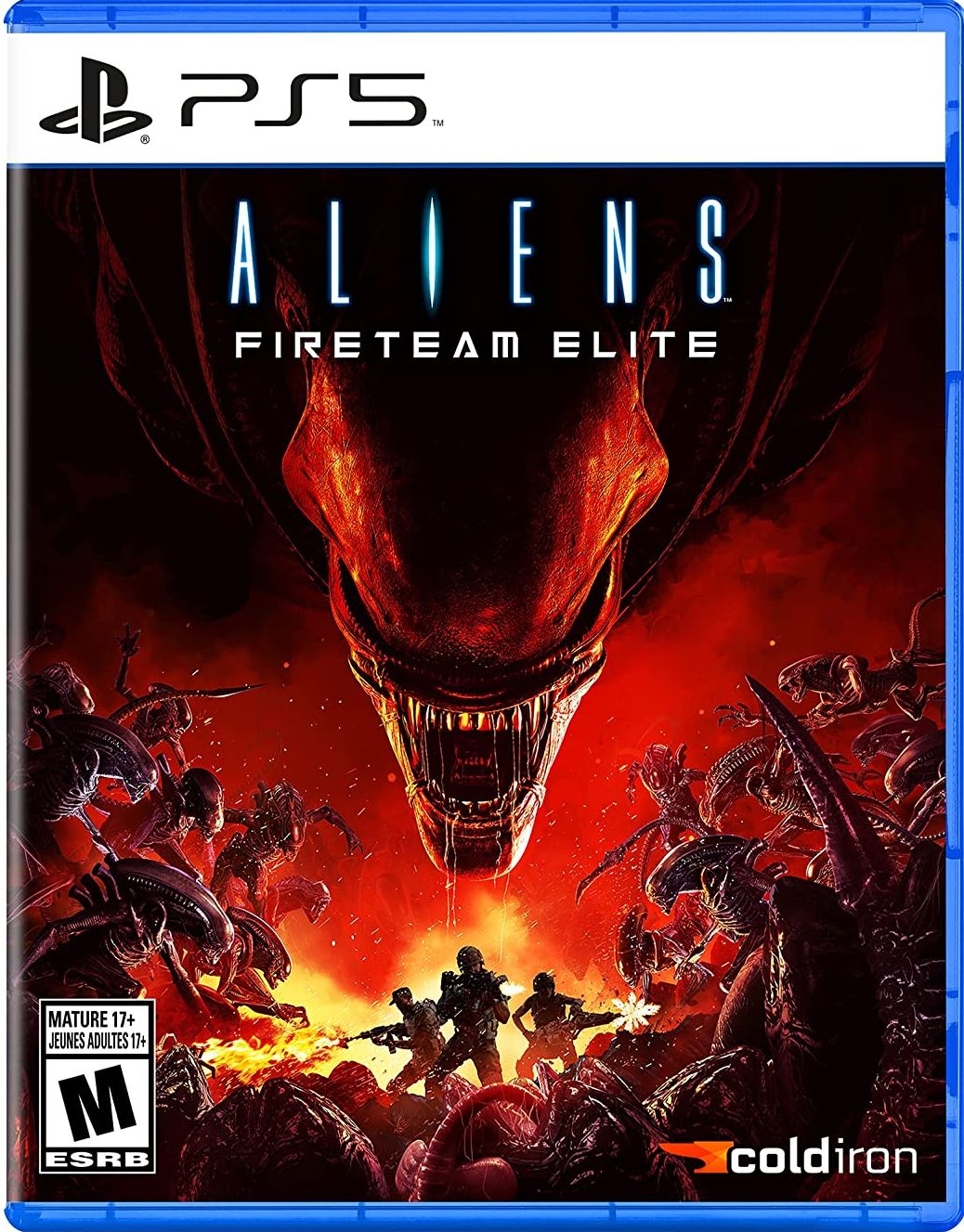 Much like the movie franchise, the history of Aliens video games have offered both action and horror. The two latest Alien video game entries have been the frowned-upon Aliens: Colonial Marines and the much-appreciated Alien Isolation. With the later going with horror, the latest game Aliens: Fireteam Elite goes back towards the action genre and also features the Colonial Marines from the Alien franchise. Any Aliens game that includes that name will make fans pause for a moment due to the original disappointment of that title. The team at Cold Iron Studios is going a different route with offering a three-player cooperative shooter that takes cues from different franchises to hopefully make the best action-focused Alien game to date. While it may accomplish that feat, it still falls into being a generic third-person shooter with replayability options.

Aliens: Fireteam Elite takes places 23 years after the original Alien Trilogy and the Xenomorphs have won. You play as a customizable Colonial Marine as you’re stationed on the UAS Endeavor as it gets infiltrated by swarms of Xenomorphs. There are twenty enemy types in the game ranging from different Xenomorph renditions to Synthetics and the enemy types will change as you progress. There are twelve chapters in the game spread out across four chapters. Each mission is long with a major conflict ending each. Each location fits the mold of the locations seen in the Alien universe, as the game does a good job of keeping the environments canon with the series.

In recent years, there have been a few movie-based games that offer the same type of experience on paper. The team at Cold Iron Studios have created a way to add replayability to Aliens: Fireteam Elite. Unfortunately, the way progression is handled is grindy as the replayability feels forced. Each mission has a level recommendation or a player rating requirement to get through. While the game is cooperative, if you can’t find anyone, you’re stuck with AI. Even with matchmaking, the player levels seem to be open and can leave you hanging if everyone isn’t close to the recommended level. Surprisingly, the AI you play with is intelligent and actually offers help, but it’s still a much better experience playing with others. 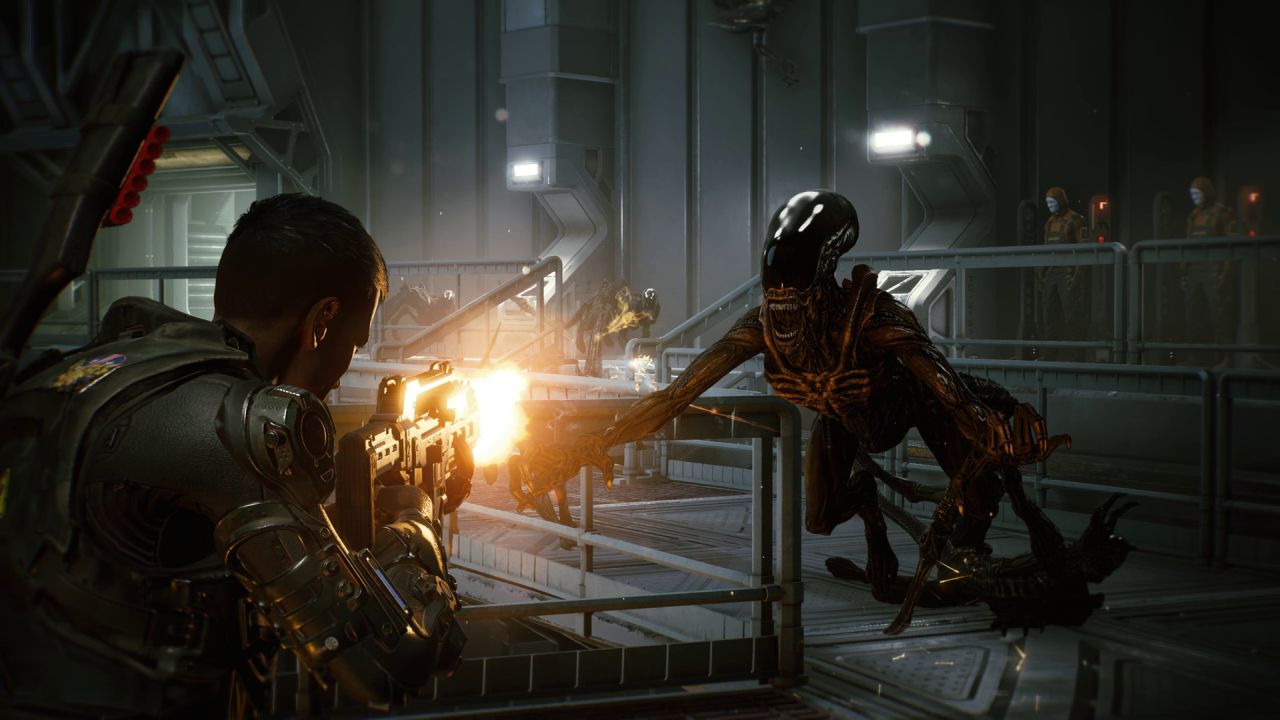 Playing with others also offers a mix of the four classes in the game. The AI you play with won’t offer any of these options, but players can choose from either Gunner, Demolisher, Technician and Doc that offer variable special weapon options to help shake things up. Special weapons can also be picked up during combat and these can include cryo mines that freeze enemies or even turrets with variable abilities. Each class can be upgraded individually, which goes back to the forced replayability. You may get further in the story with one class and if you want to switch, that specific class won’t be as effective, so you will backtrack to catch up. If you like grinding like this, it’s a good thing and offers more options than something like Left 4 Dead where you just picked a character and went at it.

Aliens: Fireteam Elite offers over thirty weapons to choose from and the ability to level these up and add attachments for even more options. Mixing and matching weapon setups to work best as a team is the best way to success. Guns and specialty weapons such as the turrets and mines can be purchased, but the money grind to get these are an issue. Guns, including the iconic flamethrower from the series, can be unlocked the more you progress through the game. Perks are also unlocked over time as you design classes to your liking. A fifth class can be unlocked once beating the game, so the option to fully upgrade five different classes does create replayability, but this is only a positive thing for those who prefer grinding missions. The weapon designing feels like a sample size of The Division, but without the amount of depth. On the surface, the game still focuses on being easily accessible. 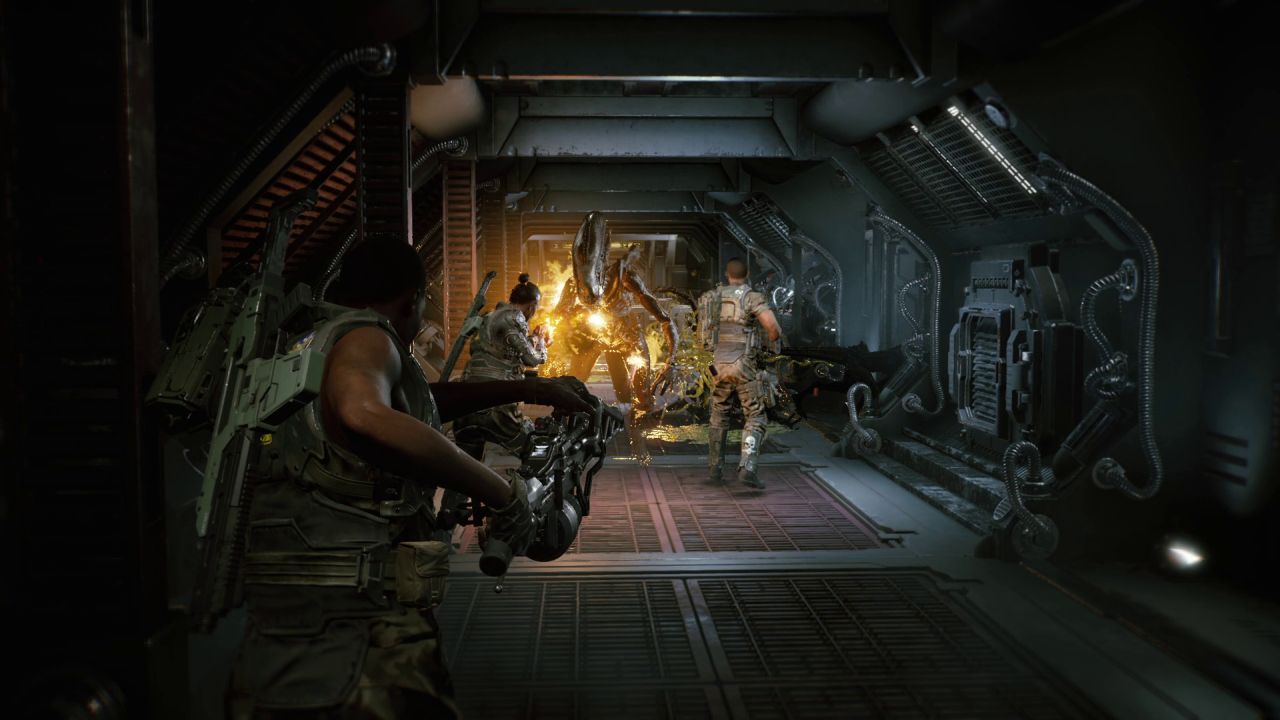 What doesn’t help with the grindiness of the game is the gameplay itself. Most of the game involves corridor running and fighting the same waves of enemies in multiple amounts. The game even offers Xenomorphs that act like a Hunter or Spitter in similar games. As a whole, it’s working with two others, running from point to point in an area of a mission, surviving a wave or horde of enemies, and competing in a grand finale for that level that entails a boss battle. My initial impression was poor, but once the weapon options opened up, the game felt better. It would have been cool to have the enemies have drops, or possibly a trauma meter for each person since this is something that exists in the Alien universe. It gets boring and repetitive, but what’s worse is the fact that 95% of the mission is beatable and the final 5% makes or breaks the 20-30 minutes you just spent on the mission. There are no checkpoints, you will just start the mission over, and this keeps the player engaged for longer, thus the grind and idea of replayability.

The game plays in the third-person and over-the-shoulder, which a good bit of games have done over the years. One can’t help but think that they wanted to implement Gears of War into the Aliens universe, though. Players turn left and right slowly and movement feels heavy. The game features a cover system, but with how fast the enemies are, I hardly found myself using the cover system. Enemies will come from behind you so hiding from enemies while facing one direction is rather pointless. Throwing grenades are also a two-button effort which feels unnatural. Mowing down a swarm of enemies and working together with tons of turrets and special weapons, however, is the big pay off to each mission. 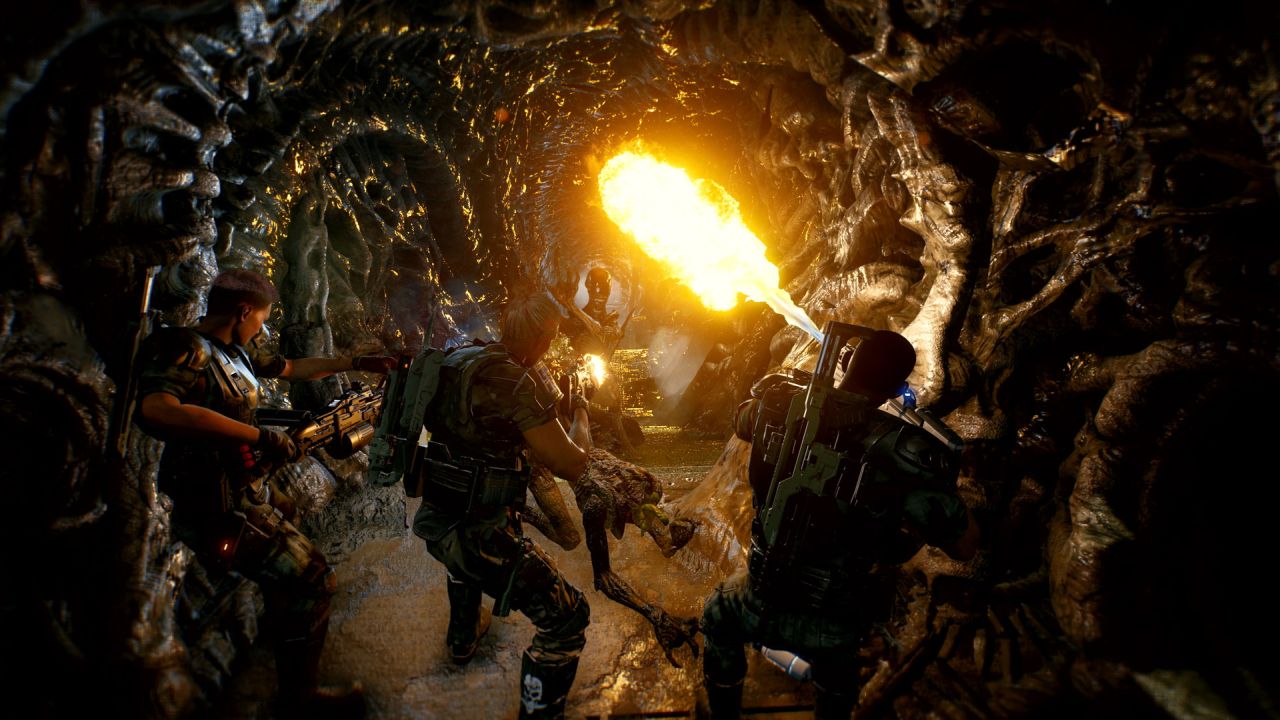 The visuals for Alien: Fireteam Elite are a mixed bag as it runs on the Unreal Engine 4. It looks solid across the board, but the visuals don’t offer anything special. Lighting is generic and while the game is in action it takes away from the details of the player models. Up-close character detail is solid along with some of the reflections. Clipping is a common occurrence with Xenomorphs crossing objects. In fact, some of the more power enemies just get stuck behind an object and never come out. Overall, it feels like a previous generation title with mostly drab environments, even if they fit the Alien universe. Alien Isolation had the same type of environments, but that game offered better visual authenticity and it’s seven years old. The visuals aren’t bad, but they aren’t impressive either. The implementation of DualSense controls for the PS5 version is also underwhelming. Adaptive Triggers are nonexistent and the only reaction the controller does is vibrate when weapons are fired. The speaker also makes the sound of the gun.

The one aspect that Cold Iron Studios hit out of the park was the audio portion of the game. Unfortunately, that ball eventually curved foul while in the air and is ruined by the comms narrative that pops up every 10-15 seconds. The soundtrack is wonderful, when you hear it, and feels like it’s pulled straight out of an Aliens movie. Every single sound effect you can think of from the series is represented here. The 3D audio also works well for identifying enemies. Unfortunately, the unnecessary comms that involve characters with no real backstory that we don’t care about ruins the audio experience. There’s a radar present on the screen that’s complete with the specific sound, so we don’t need someone telling you what direction enemies are coming from. The actual network connectivity for the game is near perfect. I never had any issues with lag or drop outs or input delay, so the actual online experience works flawlessly. There were in-game progression bugs as sometimes enemies wouldn’t spawn or a door randomly wouldn’t open. What this means is that due to the length of the mission, you get to start it all over again and go back through matchmaking. Upon beating the game, you are granted with that other class, a horde mode and more difficulty levels. There are a lot of options to do the same thing and keep you engaged. 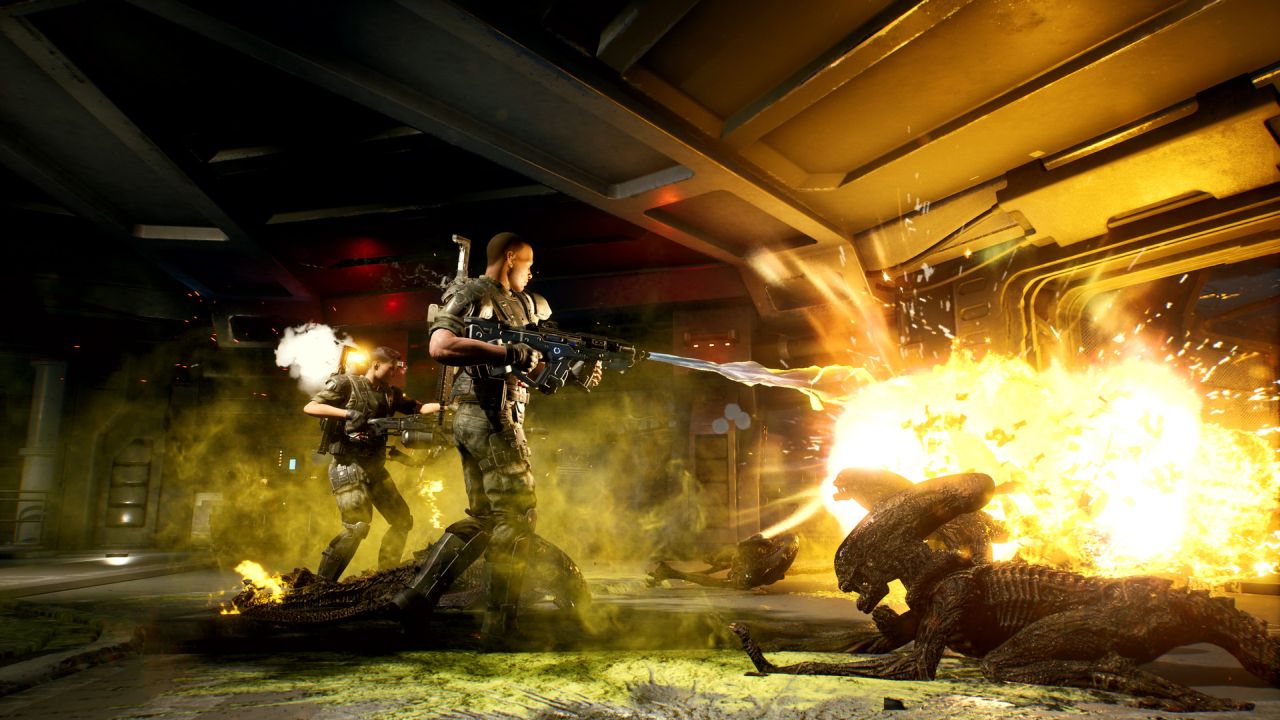 There have been a slew of movie franchises that have gone with cooperative multiplayer experience in recent years. Aliens: Fireteam Elite goes deeper and offers a lot for those that like grinding. The game just lacks a hook to keep players engaged as missions are long and redundant. The weapon unlocks and adding perks helps to keep things going, but the means of the game is separately leveling up each of the five classes across twelve long missions. Hardcore Aliens fans that liked the action-focused movies that differ from the original may find this right up their alley. The audio aspect could be amazing if there was a way to mute the comms narrative that ruins the atmosphere of the game. Ultimately, Aliens: Fireteam Elite is a functional cooperative third-person shooter that’s an improvement to Colonial Marines, but doesn’t supersede Isolation.