Let me make one thing clear: I love Angry Birds. I just wanted to get that out of the way, because a majority of this review won’t reflect that sentiment. There have been thousands of successful portable games, but few have been as dominant across as many platforms as Angry Birds. Rovio has mostly followed a tried and true formula, and every iteration has retained the addictive trial-and-error gameplay made popular by the original App Store release. It’s a game that has more than proven its worth as a go-to puzzle when the going-gets-boring, so when I was offered the chance to review Angry Birds: Star Wars for the PlayStation 4, I was ecstatic. Unfortunately, the only way this version could have been more depressing is if it came bundled with a bottle of Arbor Mist Moscato and a pack of adult diapers.

The game begins on Tatooine, Luke… I mean, Red Skywalker’s, home planet. The entire game is clearly a parody of the 1977 film, and surprisingly manages to present a relatively decent retelling of the story. Those familiar with the franchise will agree that the Star Wars tale accompanying the familiar gameplay really breaks apart the monotony, and as expected the game performs exactly like its portable counterpart: beautifully and without any notable issues to speak of. While it’s clear that the game was designed to utilize a touchscreen — and Remote Play does allow for that option as long as you own a PS Vita and are within range of your router — there isn’t anything wrong with using the DualShock 4, other than the fact that owning this game on the PS4 likely disqualifies you from ever achieving anything worthwhile in life. 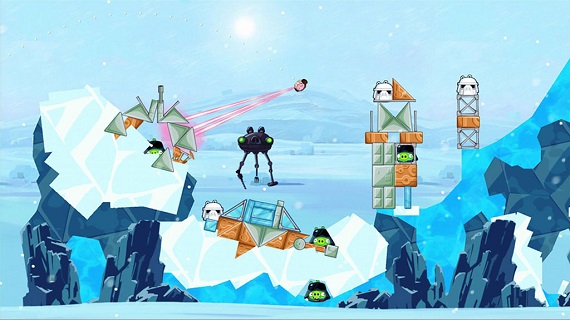 Despite the lack of touchscreen controls, every aspect of the game is spot on. It’s essentially Angry Birds on a bigger screen. The Star Wars theme helps to alleviate some of the staleness, and it holds true to the classic drag-and-aim mechanics we’ve grown to love. It’s a safe combination of the physics introduced in Angry Birds: Space, and much of what you’d expect from the franchise. I don’t feel the need to explain the mechanics, because I think it’s safe to assume that most humans that don’t survive on monthly airdrops of rice and flour have played at least one version of Angry Birds. With that said, what could possibly hold it back from being the greatest port of all time? I’ll tell you what: greed. And not just a little greed, either. I’m talking about forcing your family to watch you consume an entire thanksgiving feast greed; Eric Cartman swallowing an entire room full of fake treasure greed; terrible, awful, despicable Scrooge McDuck greed.

However, the PlayStation 4 version isn’t without its share of perks. There are 20 exclusive levels created especially for the console game that can’t be purchased elsewhere, as well as some multiplayer modes for those with equally moronic friends willing to sacrifice any semblance of rectitude for an afternoon of tossing birds at pigs. While they do offer a significant boost to the overall playtime, they feel like more of a downloadable level-pack than a console exclusive reason-to-purchase.

Angry Birds: Star Wars offers the same experience found on any modern cellphone. Visually, the game remains largely unchanged, and it performs much like any other version you’ve seen a hundred times before. The only major difference is that instead of costing the normal and ever-affordable 99¢, it comes in at a whopping retail price of $49.99. This easily makes it the most fowl entry in the series to date. Yeah, I said it. Rovio may as well have titled this release “Angry Birds: Extra Chromosome,” because if the target audience wasn’t already drinking their bath water, there’s a strong possibility that this purchase is accompanying inflatable armbands and a shiny new bicycle helmet. The only way the game could be more of a ripoff is if it physically stole your wallet and had sex with your wife. 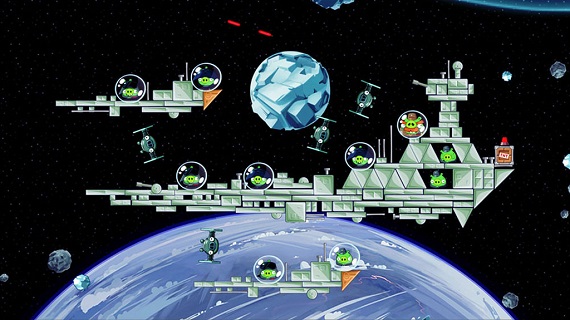 Thinking of picking up the game anyway? There are literally thousands of better things to do with $50. Here are a few examples: purchase Angry Birds: Star Wars on 50 separate devices, get 5 haircuts at any Walmart salon (assuming you don’t tip), locate a payphone and call 200 people to tell them that you almost made the mistake of buying Angry Birds: Star Wars on the PlayStation 4. But be warned: once you take possession of the game, much like the wooden Loki mask from the Jim Carrey film “The Mask,” the only way to rid yourself of the Angry Birds: Star Wars curse is to trickily pass it on to another host. At the end of the day, Angry Birds: Star Wars isn’t a bad game, but a great one that has unfortunately been exploited to take advantage of console launch madness. My suggestion? Stick with the mobile version and feel sorry for all the poor kids on Christmas morning who’s parents were fooled into thinking this was the must-have PS4 launch title.