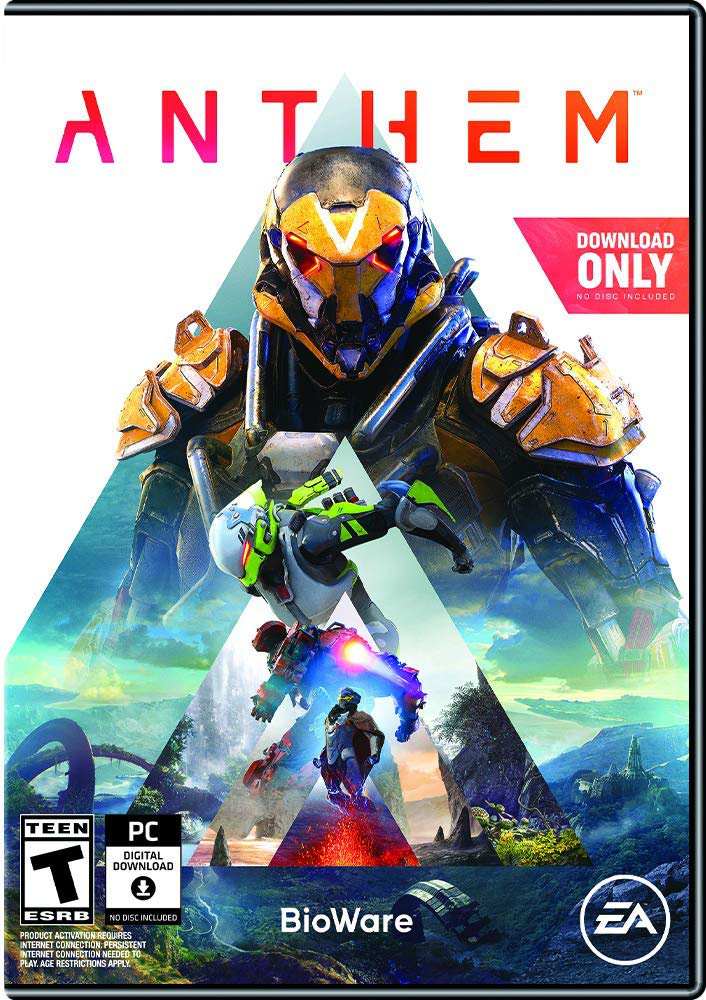 On paper, Anthem is a game that everyone should want to play. It’s a brand new science fantasy game from BioWare and the first original IP produced by the company since Mass Effect launched all the way back in 2007. Its core premise of shooting up alien baddies in a lush world with personalized Iron Man suits sounds wonderfully fun in theory too. The promise of Anthem as it was described in E3 trailers and the months leading up to launch truly was fantastic, and the game does manage to deliver on at least some aspects of it. Anthem, however, largely fails to live up to its full potential and ultimately delivers an experience that feels even more empty and incomplete than the literally incomplete world its characters have the misfortune of inhabiting.

Indeed, Anthem has mountains of issues to overcome before it can be considered a worthwhile and complete experience, but that’s not to say that the game doesn’t have at least a few redeeming qualities in its current state. Anthem’s mech suits, known in-game as “Javelins,” feel exactly how they should. While in these suits, flight is almost always available at the touch of a button and is cancelled just as easily. No matter which type of Javelin is in use, there is always a satisfying sense of speed and control that just isn’t matched by anything else out there.

The Ranger, Interceptor, Storm and Colossus each feel powerful in their own way. The Scout is a rugged work horse good in most situations thanks to its intermediate hover time, support abilities and missile launcher. The Interceptor is basically a robotic ninja: hitting enemies hard with melee attacks before nimbly darting out of harm’s way. The Storm is a master of the elements best suited to hampering enemies with status effects and picking them off while hovering around the battlefield. As for the Colossus, it’s basically just a big ol’ tank with legs; this guy packs a shield to soak up damage and extremely heavy weapons to dish it right back out with interest. Playing as any of these feels great and Bioware needs to be commended for making them work so well. 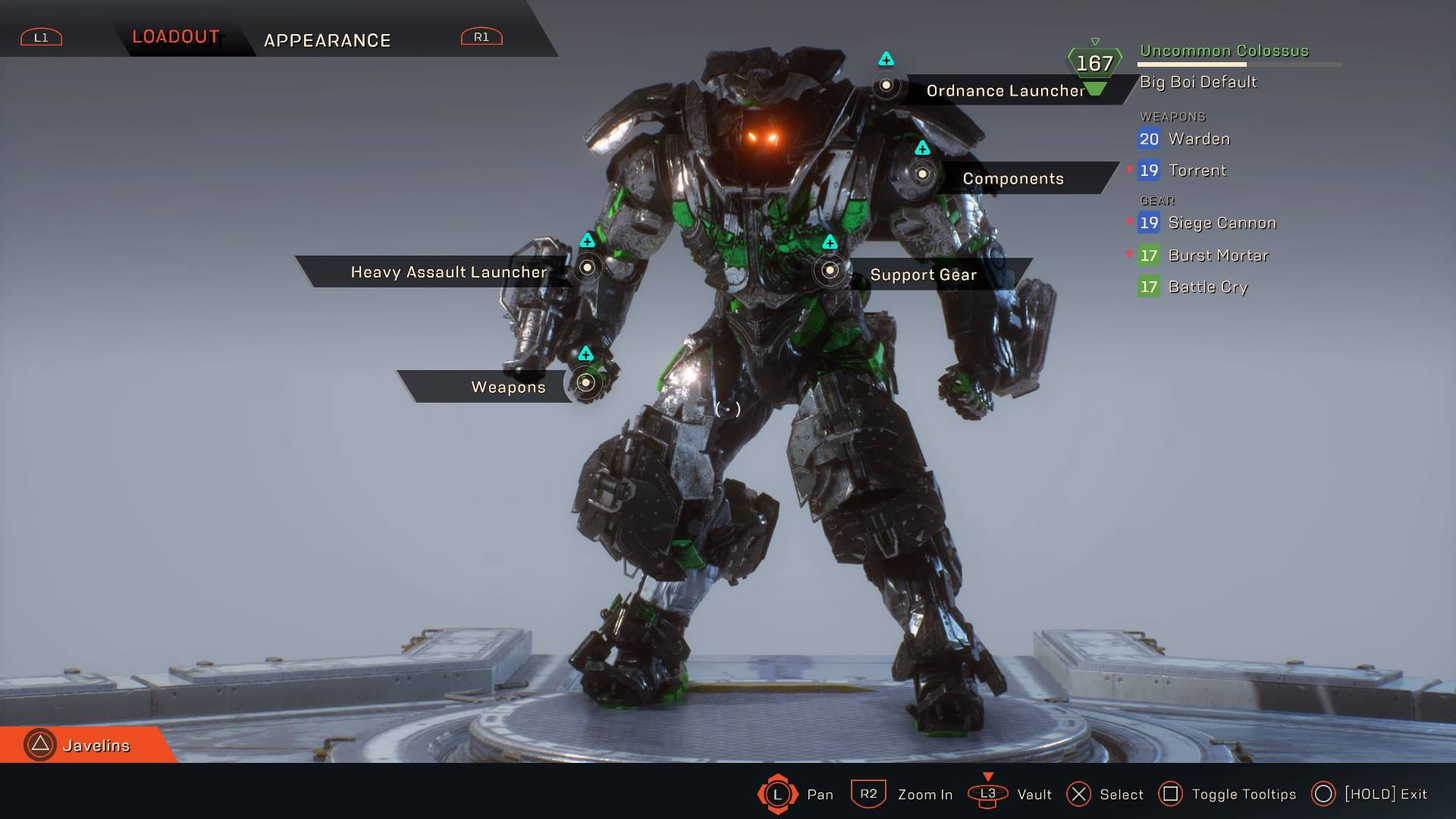 Additionally, player Javelins can be customized to a degree not usually seen in similar games. Decals, colors and even materials are up to the player’s discretion, allowing for players to really create their own look. Most Javelins one meets look pretty darn good, complementing the highly detailed and beautiful world of Bastion quite well. Indeed, Anthem looks great all around and it’s thanks to this that there are bursts of fun to be had and real charm to be seen in the world and its characters. Unfortunately, though, these burst are both short and few in number. Anthem has many, many more flaws than it does features and they do a very good job of hampering what little good there is to be found here.

Starting with the Javelins, while they control well and feel powerful, Anthem just doesn’t seem to know what to do with them. Flight is limited by a cool-down meter, and it can only be maintained for around 45 seconds before the player has to land. Water can be used to cool it, but landings will often be forced anyway. This would be okay, except that the distances players must travel between objectives are massive, so having to constantly stop gets old fast. Further, there usually isn’t much opportunity to make use of the Javelins’ mobility in combat situations. There are a handful of encounters that allow players to enjoy the full scope of their abilities, but they are the exception. Most of the time, the player is grounded for some reason.

Usually it’s because they’ll be tasked with sitting on a point and defending from waves of enemies for the umpteenth time. If that’s not the case, then either the room is too small to make good use of flight abilities or there are just too many enemies present. Defending points, defeating waves of enemies in enclosed spaces, gathering stuff while defeating waves of enemies and bringing down a boss accompanied by waves of enemies represent the sum total of encounter design in Anthem, and they almost never allow one to do what they wish they could in their incredibly cool sci-fi mech suit. Bland shooting and incredibly dumb enemy A.I. don’t help matters either. Needless to say, discovering this was very disappointing. It wasn’t Anthem’s most disappointing aspect though; that honor goes to its story. 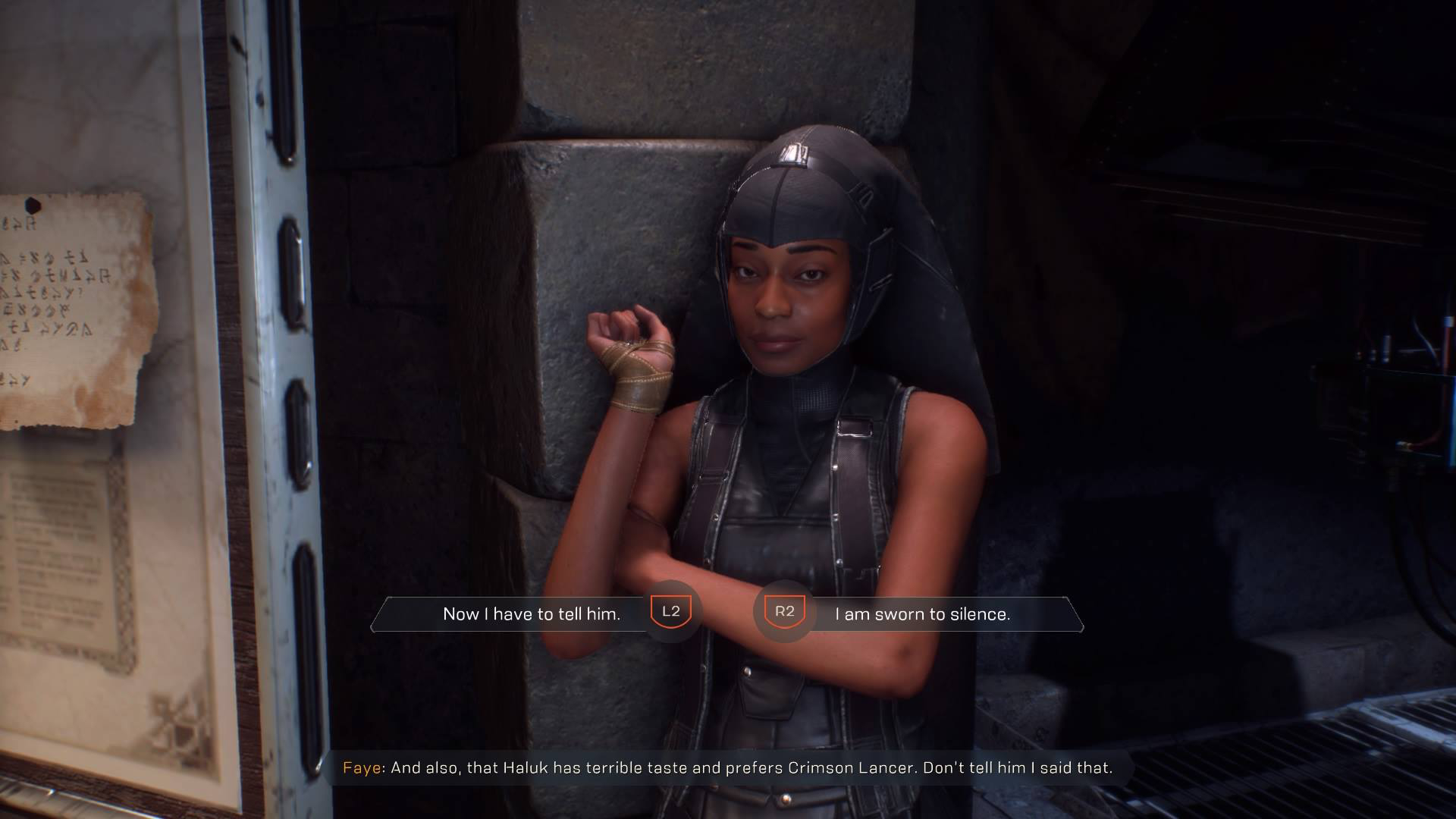 At best Anthem’s story is confusing and at worst it’s downright boring. BioWare attempts to introduce players to their world and its dangers through a couple of well-rendered and exciting cutscenes at the beginning of the game, but these do little to actually draw one into the action. Characters are introduced that are never seen again. The Monitor, Anthem’s main antagonist, has barely any presence or personality. He’s established as dangerous, but never actually does anything on screen. In place of a plot, Anthem has instead a series of loosely connected events that just kind of happen.

The game tries to convince the player that important and exciting things are happening by constantly referencing “General Helena Tarsis” and “The Legion of Dawn,” but both their significance and that of the protagonist is lost on the player because they’re never actually connected to what’s going on in the present day. All the relevant information is present in the game’s “Cortex” lore bank, but players are never shown why what they’re doing is important beyond the tired old “the world is at risk!” line. Similarly, there isn’t a single interesting character to be found in Anthem. Not even one.

The player character, “the Freelancer,” is the blankest blank slate one could ever hope to encounter in a sci-fi game. Every single response they give to every single character they meet amounts to either a snarky quip or a noncommittal remark. This person has no real opinion on anything, and for all the choices players are given in Anthem’s many tedious conversations, it’s impossible to develop one for them. Contrary to the marketing material, these choices don’t matter and only exist as a means to convince fans that they are in fact playing a BioWare game. Beyond this, no reason is ever given as to why one should care about any of Fort Tarsis’ inhabitants. Every single major and minor NPC has exactly one dimension to them and the “freelancer’s” lack of a personality always makes one feel like they’re talking at you rather than having a conversation with you. Each “squad member” (if they can even be called that) has only one heart-to-heart scene and they all feel forced. Don’t get this game thinking it’ll at least have a good story and interesting characters, because it most certainly doesn’t. 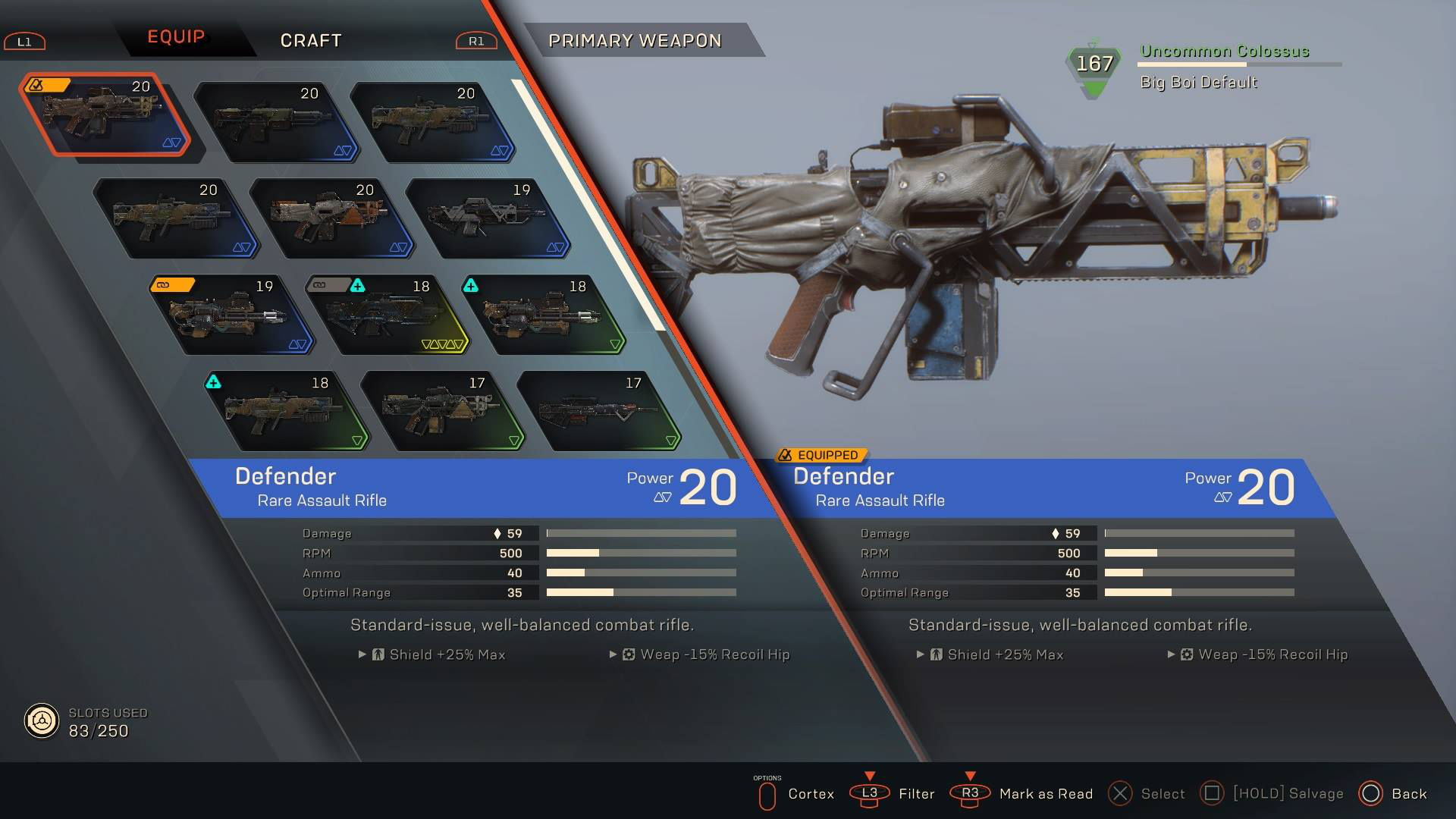 Anthem is also very lacking in the loot department, cripplingly so even. This game is supposed to be a looter-shooter, yet its loot is perhaps the most boring loot one can find in this genre. Picking it up isn’t exciting since it’s impossible to know what was collected until the end screen; most loot amounts to little more than a little icon in the inventory; armor is never dropped and weapons are all functionally identical. All members of a weapon class look the same as the rest; all rarities look exactly the same aside from their color palettes and every single weapon looks like a worn out piece of junk. Even so-called unique weapons don’t escape this. There are a handful of guns that behave a little differently from their peers, but they’re otherwise all the same. This is what players are expected to grind the same three strongholds for as they grind out Anthem’s excruciatingly underdeveloped “endgame.” At the time of this writing, there’s no point to engaging with the grind outside of eventually taking on the “grandmaster” difficulties. These are just higher difficulty levels that do nothing beyond dialing-up enemy health and damage. That’s it. No interesting twists or smarter A.I., they just hit harder and soak up more shots; hope you enjoy cowering behind cover. It’s an absolute and utter waste of time in its current form.

Topping all of this off is the laundry list of technical problems plaguing Anthem. It’s not worth going into the full list here, but there are a few that will affect most players. Enemy pop-in is the most prevalent, meaning players will often find themselves taking damage from no apparent source only to find themselves in the midst of a whole mob of previously-invisible baddies. Anthem also has a habit of crashing to its start screen, especially when trying to play with a friend on the same network. There’s more sever bugs out there like the hard system crash experienced by the reviewer. These are much rarer, but it’s important to be aware of them nonetheless. 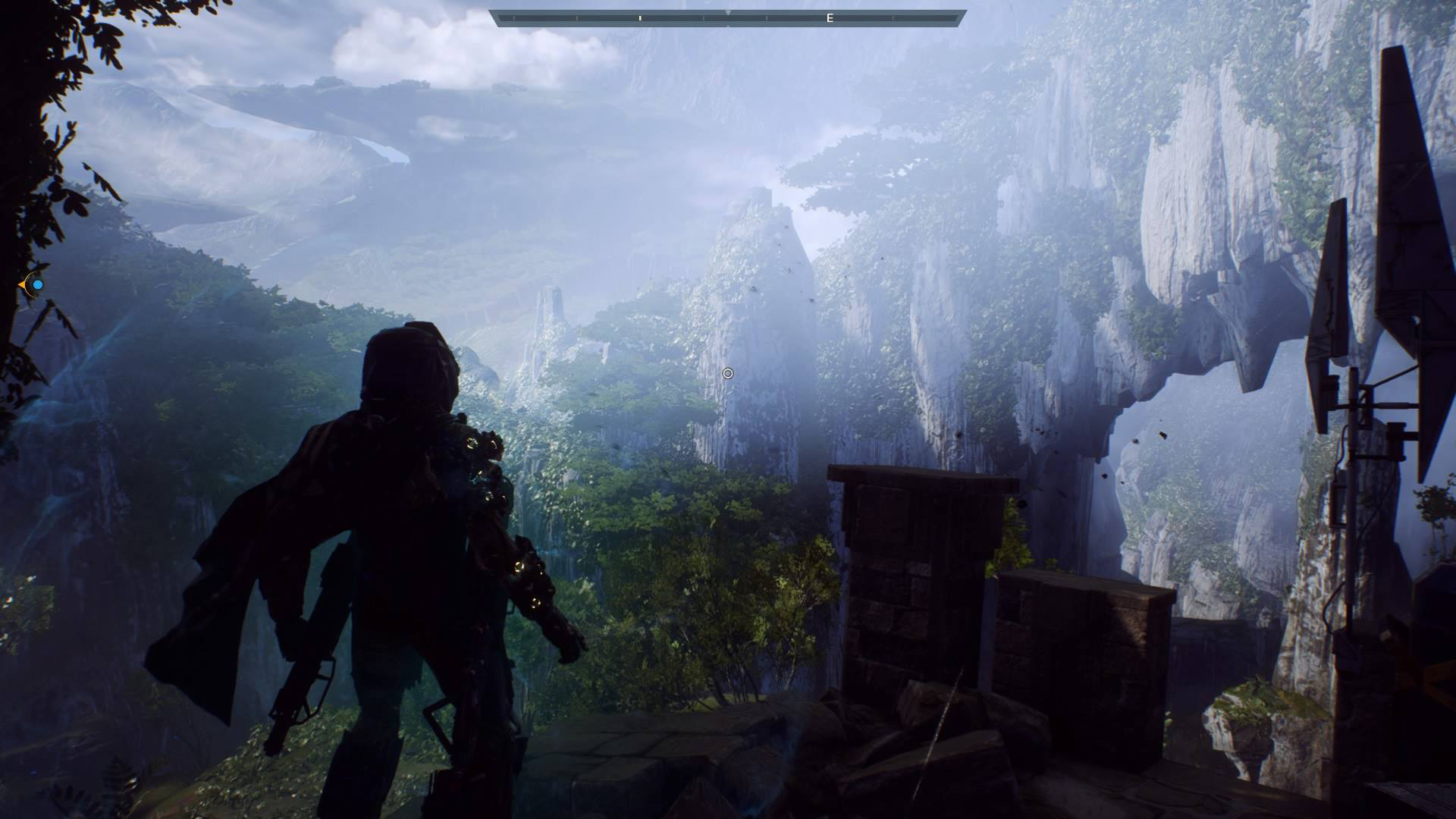 Anthem is a game based on a fantastic idea. Flying around in futuristic mech-suits with friends should have been a slam dunk after six years of development, and Anthem might yet become that game someday. Unfortunately, that’s not what it is right now. Despite nailing the feeling of flying around in its Javelin suits and crafting a beautiful world, there’s nothing in Anthem to hold a player’s interest. It all gets old quickly thanks to bland encounters, dumb enemies, a borderline empty world and a dull story. Add to that a general sense of technical instability, loading issues, non-existent end-game and utterly boring loot, and the result is a game that feels unfinished, underdeveloped and wholly unsatisfying. Maybe check it out a year from now, but don’t even bother otherwise. There are many other games that offer a similar experience and they all do it better.