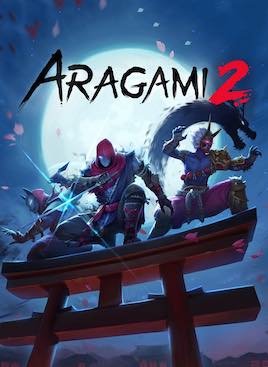 Amidst the drowning noise and scuffle that is (or perhaps was is more befitting for the current time) the show-floor of E3, a charming throwback of a stealth game by the name of Aragami was first discovered over five years ago. As reported back then, developer Lince Works’ intentions may have been to attract fans of the genre’s traditionalist past. Namely the readable patrol routes, winding necessity to duck around corners and overall sense that even when presumably removed from the abrupt state of danger posed by one wrong move, players were always made to feel anxious. Ready that it could all go pear-shaped in a matter of seconds. And as its final release showed, while not a perfect or flawless showcase both in craft and technical performance, the original Aragami of 2016 proved Lince Works had a deft but more importantly sensible touch when it came to balancing mechanics with aesthetic.

A game that was eloquent yet smart in how it utilized its stripped-back, minimalist approach — a design choice that reflected well in something as simple as its user interface, or lack thereof. An art-style too that as much emboldened as it reflected the quaint, cel-shaded visuals of its feudal setting. Yet fast-forward five years to the here and now: to see the Spanish studio return to the world of old-fashioned stealth in the form of a sequel is still a surprising reality to have emerge. Not because a sequel, in theory, couldn’t build on that same nostalgic, back-to-basics pedigree, but because it was that very formula of simplicity — stealth without all the added-on perks and potential distractions of its more recent years where the game had originally shone. It was good (least in the context of 2016) to have a game so intentionally pulled back from excess. To focus so squarely and precisely on the art of moving from point A to B. To finally get the better of those multiple patrolling guards and rotating “vision cones”.

That’s not to say that Aragami 2 has somehow gotten more complex or that it’s intentionally going against the grain of its predecessor. If there is unquestionably one thing that’s true of the sequel as it was in the original, Lince Works aren’t masquerading this as a game that appears more complex than it actually is. For those who liked the grounded yet weaving level design of the original release, it may comfort you to know that this is one aspect that throws up interesting, albeit brief, moments of dilemma during one’s time tackling an objective. Even if some of the charms of the original game are nowhere to be found here. Namely, perhaps the most obvious absentee of them all: the former premise of manipulating, even creating shadow out of nothing so as to sneak one’s way around environments. In its place is a sort of teleportation move whereby players are granted more freedom in as much the verticality of their movement, alongside the regular sneaking around corners as well as in and out of buildings. It’s a strange design choice for the sequel all things considered and while the move towards a more nimble and multi-level hopping manner of traversal doesn’t exactly better the original’s mechanics, the levels offered in Aragami 2 are at least aptly structured to be both testing yet curious in what tempting alternative routes they may house. 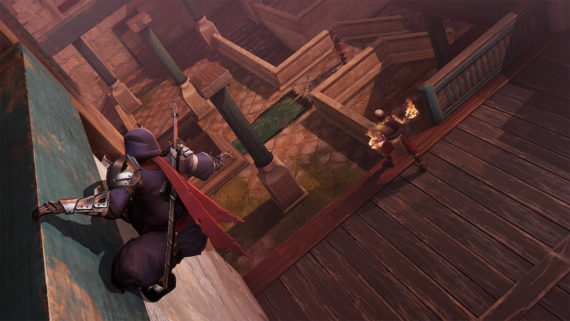 It’s a shame then that these surroundings are — like so much of Aragami 2 as a 10-15 hour experience (and one that’s far too damaging a detriment to dismiss) — repeated one too many times. Missions often requiring you to visit and revisit the same handful of levels, albeit with specific regions walled off and restricted. Orchestrated within a kind of progression that is not the right fit for this type of game. And I’m not referring to the sequel’s pushing the co-operative angle in preceding marketing — though the idea of mission structure being one to select amidst a list is so blatant an attempt to push the co-op angle. Even if all that ends up doing is souring the experience for those, like myself, looking for a cohesive story. Let alone a more natural transitioning of progression that doesn’t require returning to the hub, sprinting to an obligatory marker to get a morsel of narrative exposition, to then turn back the way you came and load up another mission. Sure, the original Aragami’s progressing of its events wasn’t the smoothest, but it at least didn’t have players jumping in and out of hub areas and menus as if it were some social hub.

Instead what we get with Aragami 2 is this strange retrofit whereupon players are required to “queue up” for missions. Even the way usernames are listed — lone players having to “confirm” in order to commence proceedings — just screams (and not in a good way) the readying-up formality of something like Monster Hunter. In all honesty, I’d much rather play Monster Hunter for this kind of co-op, jump-out-into-the-world adventure with folks…and I’m not even that big a Monster Hunter fan to begin with. In short: it’s an odd fit and one whose figurative hoops to jump through just to actually, finally, play the game, only go to frustrate the experience more so. It wouldn’t be that damaging an addition had the mission structures provided any meaningful variety. Unfortunately, as soon as you hit a dozen-or-so missions in Aragami 2, you’ve practically exhausted what variety there is to explore. Objectives often revolving around either taking out or extracting a given target. Of course, staying hidden and trying one’s best to avoid all manner of confrontation with an environment’s ample number of hostiles becomes the real drive behind a lot of these missions. Even if the reasons for doing so may not be entirely reflective of the developer’s original intentions. 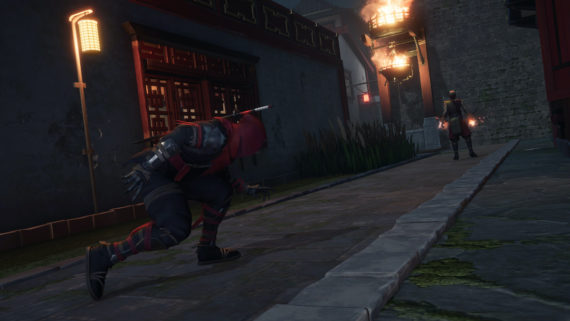 For a game that bills itself as having “high risk and high reward” combat, it’s safe to say that the combat in Aragami 2 is anything but rewarding, or robustly built for that matter. Whether it’s the over-powered state of regular enemies — not least their ability to seemingly teleport to within striking distance despite your best efforts to remain out of reach — or the inability to properly read when attacks are coming. While it may be understandable to craft a premise that actively discourages you from engaging in open combat (as so many stealth titles naturally lean towards), such sequences in Aragami 2 rarely feel as fluid or as balanced as they perhaps should be. Not that there isn’t any semblance of an incentive to ever delve into this part of the game to begin with, but the fact that there’s no RPG-like branching out of skills, strengths or attributes to improve for combat — outside of a generic user level and main skill-tree in the game — only goes to further downplay its relevancy and how, like so much in this sequel, it feels existent simply to fill space. That feeling of irrelevancy even bleeds into the skill-tree itself, sad it is to remark that a lot of what one can unlock bills itself as a potential means to better one’s stealth/non-lethal tactics. But the fact that most missions in Aragami 2 can be fulfilled without ever needing to delve into the skills offered, makes a large chunk of one’s potential character build feel like an unnecessary investment.

But as if that wasn’t disheartening enough, all of this precedes any talk of the numerous bugs encountered along the way, not to mention the relatively unpolished and unappealing look of certain cutscenes and character models at times. Bugs especially that aren’t so easily dismissed — comical it may be to witness one-too-many times an enemy forcibly sliding into a required position when a button prompt is activated. Or the fact stealth take-downs and their accompanying animations — despite the sound of punches being made — just don’t made any sort of connection whatsoever. Another instance resulting in the player-character clipping through and getting locked in a part of the map that was clearly walled off, but whose lack of a way out required a complete restart of the mission. Another resulting in one’s player-character caught in a somersaulting animation to the point they clipped through and beneath the world. 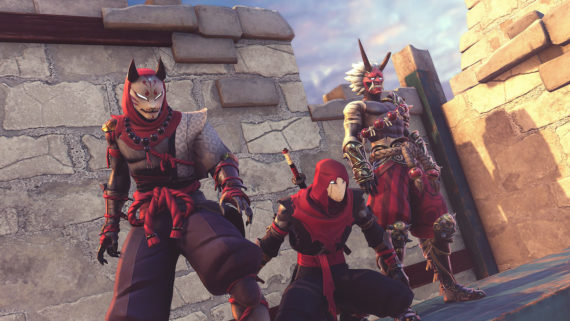 Arguably one of the original Aragami‘s greatest strengths, it’s nice to see Lince Works broaden the scope of their level design. But while traversing the multi-floor scope of the environments can be curious and rewarding for a time, the drastic alteration to how mission structure and overall progression is handled in Aragami 2 feels like a grave error of judgment. No doubt a consequence of Lince Works’ desire to incorporate co-op/online-centric outings for players to engage with, while the intention may be innocent in principle, the needless series of figurative hoops to jump through as well as a disjointed, shallow approach to mission structure, undermines what appeal the 2016 original generally had. Aided in no way by a woefully-inadequate integration of combat as well as a generally unpolished look to its characters and aesthetic alike. While there’s intrigue to discover amongst the structure and layout of locales in Aragami 2, the sequel’s turn away from the distilled charm of its one-man stealth prior leaves more perplexed questions than convincing answers.