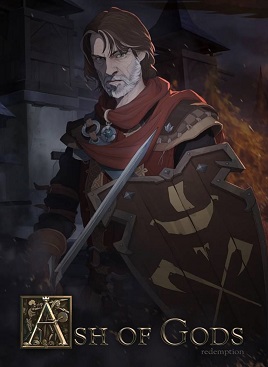 Fantasy is something that when asking anyone what it means to them, they will most likely throw out a slew of titles which can tell all that is needed of the question. It’s rare though in an overabundance of stories, tales and lore that fantasy can encompass — as it stands today — the sense to get across what fantasy has existed for since the first tales of men, magic and gods. Fantasy gives way to self-discovery, emotional growth, reflection and allegorical storytelling that are crucial to the human experience. Ash of Gods: Redemption from developer Aurum Dust is a brand-new IP telling a tale woven in fantasy that if asking one question of its player: what does hope mean to you?

The world of Ash of Gods is one steeped in a familiarity of a deep foul energy; where people only look out for themselves, the commoner has little to nothing and life offers slimmer hope for much of anything else. People in Terminum make best with the lot they’ve been dealt in life and worship what they hold dear: the old gods, whomever they may be.  It’s unfortunate, then, that in this same world where people seem to just get by, the Reaping is upon them. It’s not the first time it’s happened, but is very well the last.

One of the best things that Ash of Gods does for itself for this kind of storytelling is weaving its tale across multiple characters. It also slips into (and maybe intentionally or not) the timeless rule of threes with main protagonist Thorn the grizzled Guard Captain, Lo the Shadow Assassin with a blood stained past and Hopper Rouley a monk who may be more than he seems. Following this cast of characters allows for the biggest field of view for what is happening in this grim world; especially with the amount of information that Ash of Gods throws at the player. It also allows for multiple playthroughs which is recommended, seeing as much like a choose your own adventure book, every decision being made will have permanent choice. Unlike most video games, though, this direction of choice begins affecting everything in the world-at-large immediately, playing a pivotal roll in the events to follow as the game progresses. 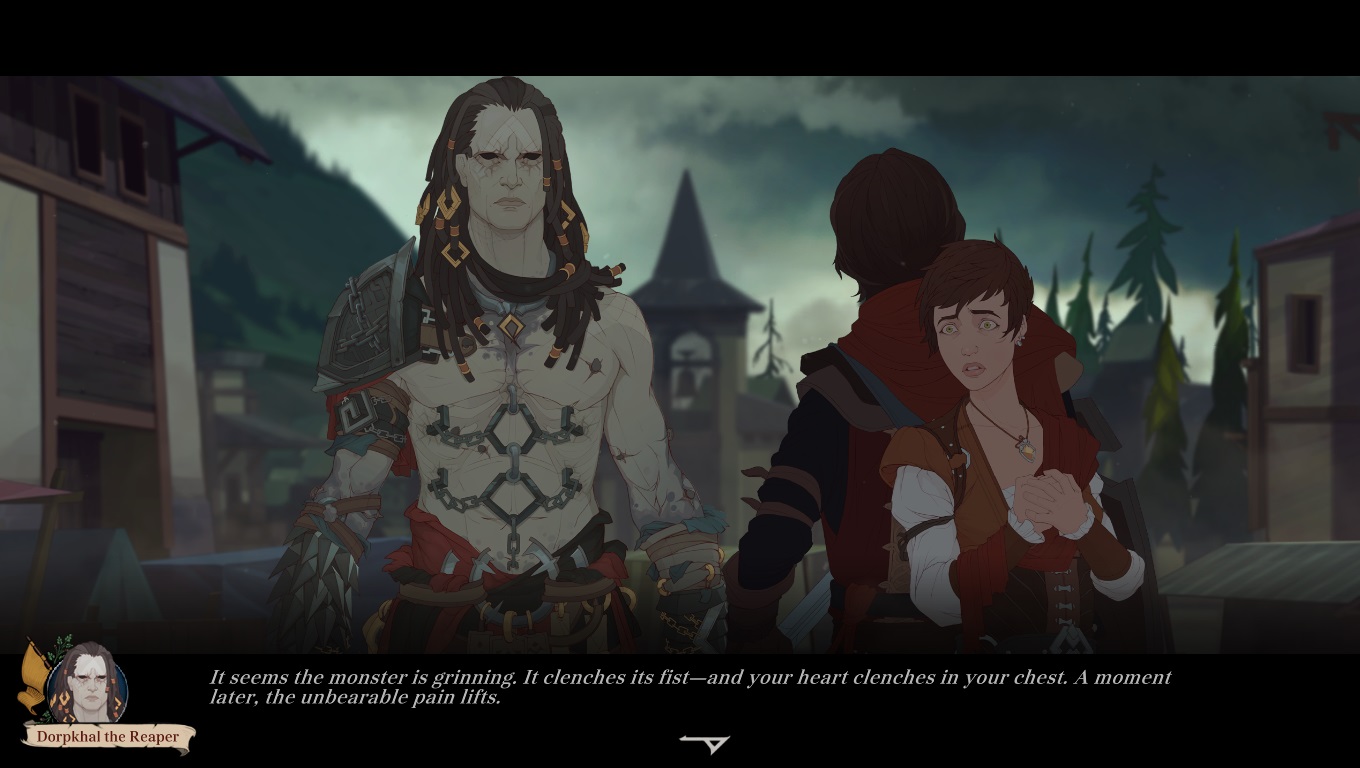 Almost a thousand years ago the first event known as The Reaping began. People died in mass, were slaughtered by Reapers and general chaos ensued. Luckily it was stopped by equally powerful beings which don’t get too much explanation like everything else in Ash of Gods. Fast forward to the game’s start and another Reaping has begun with a man named Thorn and his family. He will meet his fate — or at least he is told this — right as the Reaping commences in the town where he is Captain of the Guard. This is one of the few missteps Ash if Gods takes and continually fumbles with throughout. The sheer amount information that is thrown at the player is overwhelming and it doesn’t help that there isn’t an index in sight. Just having a quick menu to explain all the kingdoms, players and lore would be immensely helpful, but unfortunately the player is left to cram as much information into their brain space as possible. It isn’t a bad thing that there is such an abundance of world building; it’s the way Ash of Gods doesn’t think to help the player along with such world building that is the problem. This doesn’t stop any of this lore and narrative from being immensely interesting, and if anything, push the player to pay even closer attention to every little detail which works in the favor of Ash of Gods.

Narratively, Ash of Gods is driven by the agency given to the characters and not so much the player, but makes up for this with an engaging battle system. As with most story-driven games with heavy emphasis on character, Ash of Gods will have the player making decisions with lasting effects shaping the story for better or worse. There is a constant battle between the task at hand, trying to maintain afflictions and character management all going on at once, but unlike the mass info dump that is the lore, these gameplay elements congeal in a way that is seamlessly intuitive. After the initial reaping, coming home to his wife afflicted with the mark of the reaping and protecting his only daughter, Thorn sets out to figure out how to put a stop to all of it. Each major character will encounter other characters who will join or leave their party depending on circumstance. It’s one of the best things Ash of Gods does conveying a sense of autonomy in how the characters interact with the world. When a character wants to leave a certain party, they probably have good reason to. Unfortunately, this doesn’t help some of the weaker moments for the characters. Ash of Gods finds itself going back and forth between excellent character development and a flatness that only a soda left out in the sun would have. Which seems to be Ash of Gods’ real battle with itself. 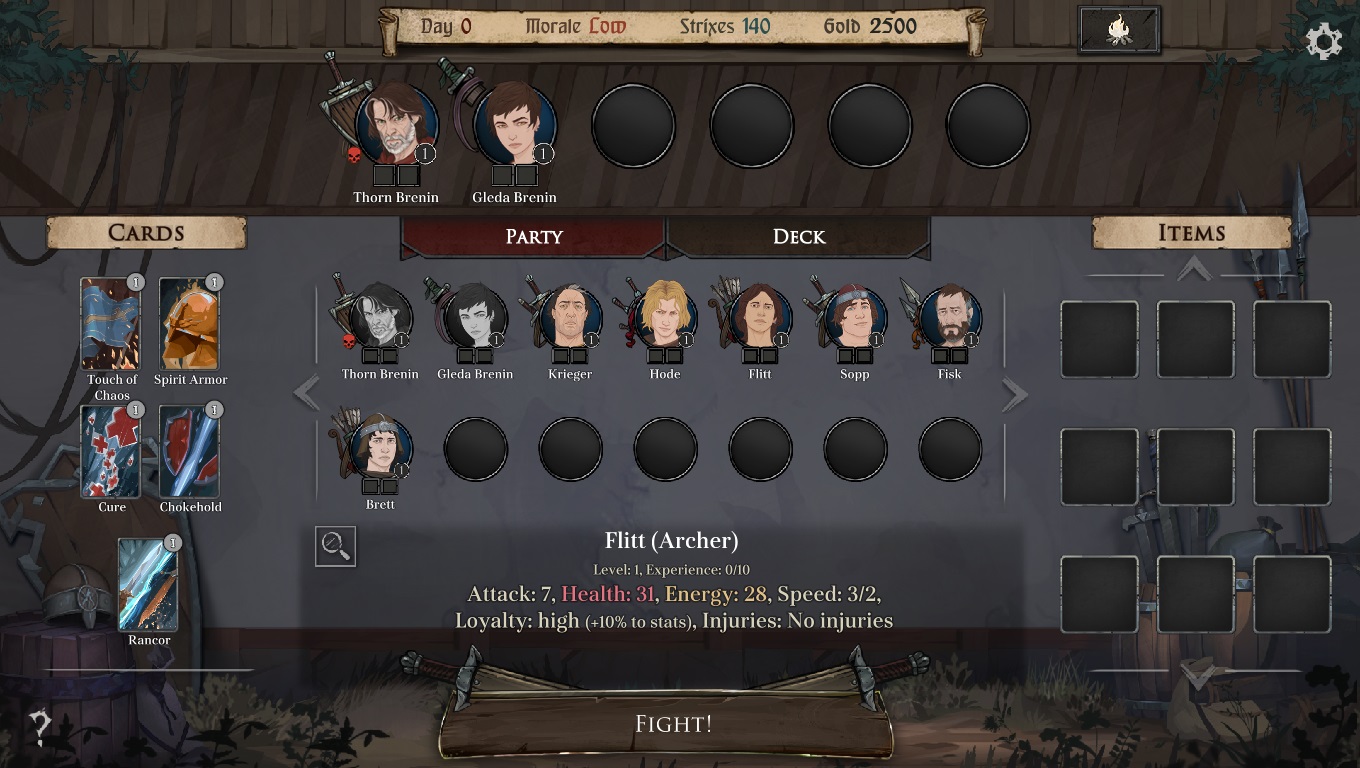 Just as much as the narrative can swing back and forth from being exceptional written to feeling awkward, so too does combat flow this way. Due to playing three very different characters, Ash of Gods finds itself in a power struggle with the player. One moment the player takes the reigns of a rag-tag group that can barley hold it together during combat and the next moment assumes control of the shadow assassin who is extremely OP on his own. It makes feeling grounded in combat never truly happen. Just like the lore, the sheer amount of abilities, cards and stats becomes overwhelming to keep-up with and the game doesn’t do enough to help the player along with all these systems, which is unfortunate because the systems are doing something that works. The combat may swing wildly moment-to-moment, but that doesn’t mean it’s not fun. Instead of dice-rolls a la The Banner Saga or the caravan, the player will be managing a set of playing cards which can be collected through the game and grid-based play on positioning of characters and using health/energy together to survive. Some of the early battles will feel easy, but combat becomes challenging as the story progresses in a way that is rewarding if not a little frustrating at times for reasons stated above.

With games like Into the Breach being intuitive with its grid-system, it’s a bummer when features such as an undo button are nowhere to be found in Ash of Gods. It’s easy to see why this wouldn’t exist in a game about permanent choice, but it’s still nice to be able to backtrack due to accidental prompt selections or seeing that moving to a certain area might not be advisable. It also doesn’t lend to good feeling when perma-death is lurking around every battle. A character can fall in battle taking one wound and is lost forever after four wounds are taken. Losing characters is actually hard but this will change the encounters of each battle depending on the difficulty. Imagining players ramping the difficulty all the way up scares me personally, but it’s not hard to see certain players doing it and succeeding.

Where Ash of Gods finds one of its strongest features is in its art direction and music, immediately recognizable as something that might related to The Banner Saga. Imitation is the highest form of flattery and if it means getting gorgeous looking animation to look at, that’s not a bad thing for the players or the artist working for Aurum Dust. Each character is wonderful to look at and colorful enough in their animation expressions to get across who they are without having to read their bios, which is a shame because the bios are lackluster and some almost feel copy and pasted with just a few lines changed here and there. 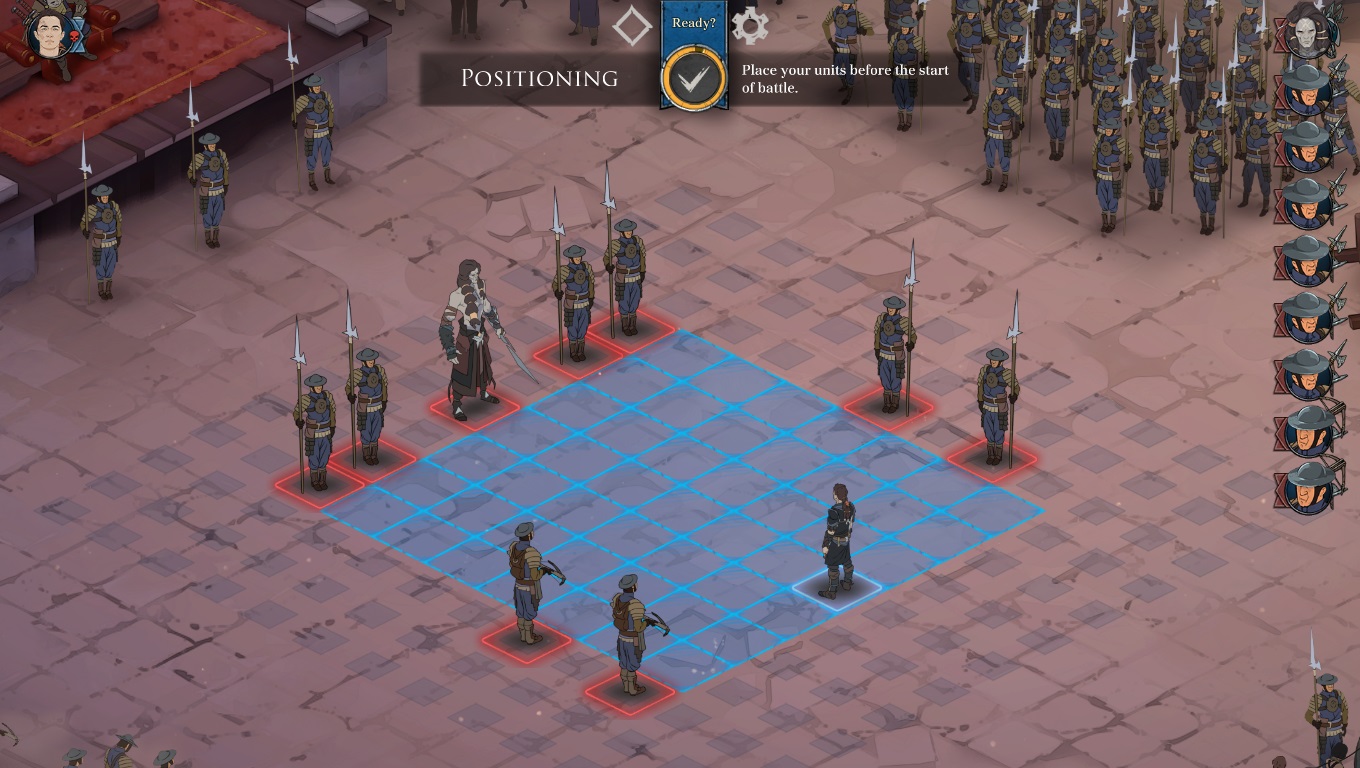 Ash of Gods swings back and forth between being immensely enjoyable and feeling like it could be doing things so much better — and it knows it. Ash of Gods is obviously a huge nod to The Banner Saga, but does its own thing enough to hold its own; it just doesn’t carry itself with the confidence that could push it towards greatness. All the pieces are there, but due to poor writing in places, battles that can range from fun to frustrating and not enough focus on the areas that work, Ash of Gods: Redemption is almost a metaphor for itself. It’s an enjoyable experience constantly battling itself much like its characters are battling the reaping: succeeding but fighting uphill the entire way.