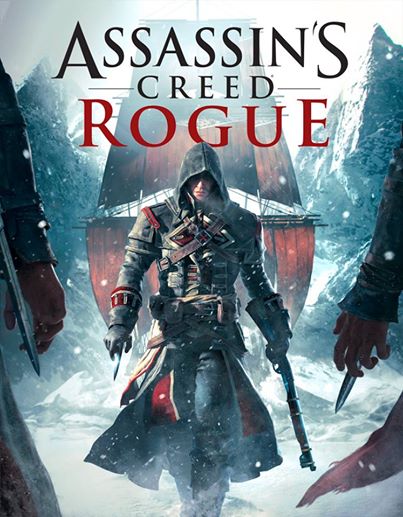 Assassin’s Creed Rogue is very much the Adam of Ubisoft’s labors. It’s a patchwork of old assets, borrowed mechanics and whits of creativity only narrowly knotting the yarns of the franchise’s highlights. Despite an obvious lack of fresh material, however, Rogue manages to spin an experience rarely spoiled by the footprints of its forebears. And while its offerings are predictable, its circus-tent of shipwrecks, islands and collectibles make for a surprisingly fun déjà vu.

The story follows the same stab-happy formula we’ve come to tolerate (and love, occasionally), focusing on the high-minded transformation of protagonist Shay Cormac; a bloodthirsty creed-enforcer turned upper-crust Templar. While hardly as compelling as Ezio’s passionate tale of revenge or Edward’s sloppy piratical escapades, exploring the age-old fracas of competing brotherhoods from a previously unplumbed perspective is, at times, thrilling.

While the overall narrative isn’t strong enough to support the weight of Rogue’s color-by-number setup (and it’s shockingly short for a full retail release), the faction vs. faction template has been refashioned just enough to scratch the surface of intrigue. Yes, there’s still plenty of sneaking through circles of high-alert in search of a kill, there’s plenty smooth scaling of lumpy buildings, trees and ships, the same seamless naval warfare and a desultory assortment of to-do’s. Ultimately, it’s the killing of various assassin’s — characters you’d likely befriend in another game about another protagonist — that pushes the story forward.

Gameplay, not unlike the story and characters and world and [insert additional feature], boasts essentially the same mechanics found in Assassin’s Creed: Black Flag. Sailing through Poseidon’s bowl of icy North Atlantic danger is a blast, and exploring beaches, settlements and wilderness is wildly reminiscent of every single entry in the Assassin’s Creed series. The busier slice of world, New York, provides little change in formula as well, although in spite of its sameness there’s always plenty to do and see if you’re willing to throw on a pair of rosy lenses.

Extracurricular activities, on the other hand, aren’t quite as unsubstantiated. Most story-breaking diversions, while mechanically monotonous, aren’t the exercise in repetition Black Flags never-ending map of “content” extends. There’s always something new to do, be it infiltrate a fort or explode an enemy vessel, and even with its complete lack of multiplayer, Rogue is a veritable ragbag of busyness. The problem is that, in essence, nothing has changed. Having spent countless hours in Black Flag’s playground, Rogue’s slab feels very much scratched, cracked and shattered.

As is the case with most entries in the series, Rogue’s slew of collectibles — different from Black Flag’s only in text and image — are filler. Maps, gems and fragments of an ancient sword are constant gestures of superficial progress, but nothing more. The Series’ base renovation makes a return, too, allowing players to improve various buildings across the map’s assorted townships. While improving properties will help pay for darts, trinkets and upgrades you’ll no doubt demand throughout your journey, the system itself can be an enjoyable pastime in its own right, and patient players willing to fiddle with its menus are greatly rewarded.

Like most everything else in Rogue, the formulaic combat hasn’t changed in the slightest. Slashing, stabbing, firing, dodging and counter-attacking all make a triumphant — if clunky — return. This, as might be expected, makes hand-to-hand action the least enjoyable aspect of the game, which is invariably a reminder that the series’ abrading mechanics have long been in need of an update. New toys, such as the air rifle and grenade launcher, aren’t entirely helpful outside of particular encounters and appear pretty infrequently.

Rogue’s new feature, though not as substantial as Unity’s co-op or Black Flag’s introduction of seamless seafaring gameplay, is far and away its most refreshing inclusion. As a Templar, you’ll often become the target of an assassination, encouraging you to scan your surroundings for looming danger. Naturally, the goal is to avoid detection and, when possible, tilt the odds in your favor. As you rush across rooftops or shoot through crowds, you’ll sometimes hear the whispers of an approaching attacker. Switching to Eagle Vision and locating the hired-blade is integral to your survival, as failing to locate the assassin will result in a hefty chunk of damage and a race through town.

Sadly, the “Stalker” feature is also a weak link in Rogue’s repertoire. When it works, it’s fantastic, offering a new approach to gameplay that’s both exciting and fun. When it doesn’t, however, it’s incredibly frustrating. And more often than not, the camera is to blame.

Visually, Rogue sits alongside Black Flag admirably. Lush greenery, deep oceans and rickety shacks look fantastic — if you’re willing to forget that current-gen consoles exist for the entirety of your playthrough. And the sounds, while mostly consisting of Black Flag’s tunes and shanties, are always fittingly enjoyable.

For all its faults: the agonizing familiarity, the workable plot, the insipid characters and, perhaps worst of all, the intrinsic absence of novelty common in most of the series’ open worlds, Assassin’s Creed Rogue — Unity’s last-gen partner in crime — is astoundingly stable. It spins the gears of entertainment often enough to justify its cut-and-paste design, and offers a wellspring of activities to tackle, encounters to conquer and treasures to unearth — despite having been borrowed from previous installments. Diehards will find themselves deeply engaged in the series’ first attempt at moralizing the plight of the Templars. It’s a fitting end to the Kenway Trilogy, and with a few exciting moments and plenty to do, there’s reason enough to set course for another piratical adventure and test the waters of change another day.