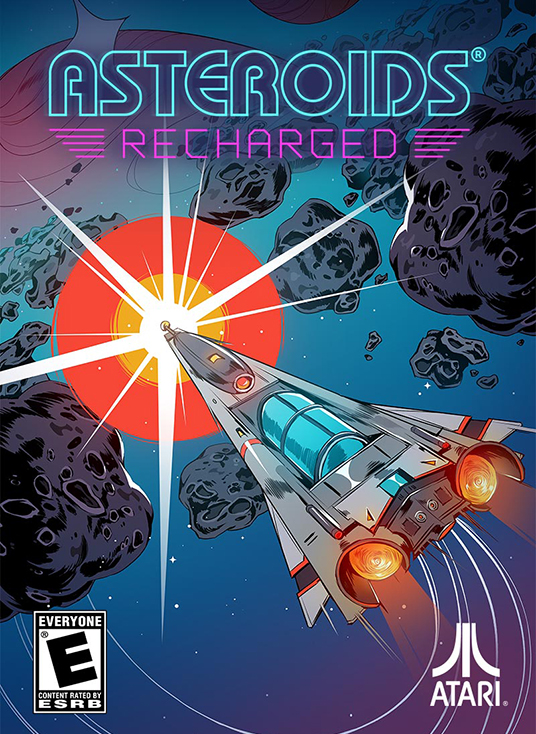 There aren’t a lot of classic arcade games more legendary than Asteroids.  It was there almost the moment arcades took off and through sheer quarter-sucking power earned its spot at the front and center of any establishment it was found in.  As time went on and newer and shinier games arrived, Asteroids eventually got pushed to the back, but odds were good that most arcades had a unit kicking around somewhere long after the cabinets that took its spot had aged out entirely.  Asteroids is one of the greats and to this day new shooters still show up modeled on its basic gameplay.

While Asteroids has had several official sequels over the years, it’s been a good long time since the last one, the 1998 Activision version for PS1 and other assorted consoles.  The wait for an offically-official Asteroids game finally ends with Asteroids: Recharged, which like the previous two games in the Recharged series (Centipede and Black Widow) updates the original while remaining relatively faithful to the core design. It’s been a lot of fun so far seeing these deep dives into Atari history get brushed up and given new life and Asteroids isn’t much different.

It feels weird to describe Asteroids‘ gameplay, but to be thorough: you’re a small triangular ship in the middle of the screen able to rotate clockwise or counterclockwise and fire a thin focused bullet.  A swarm of asteroids of varying size float around the screen, and shooting one splits it into two smaller rocks.  Every once in a while a saucer flies in from the sides taking potshots at the player ship, but the real threat is from the swarms of tiny rocks that can grow if you’re not careful about choosing your targets.  In the original game the asteroids came in three sizes, from large to medium to small, so each large asteroid could spawn four small ones.  That doesn’t sound like much, but multiply that by however many large asteroids the starting wave is and the danger level can shoot off the chart. 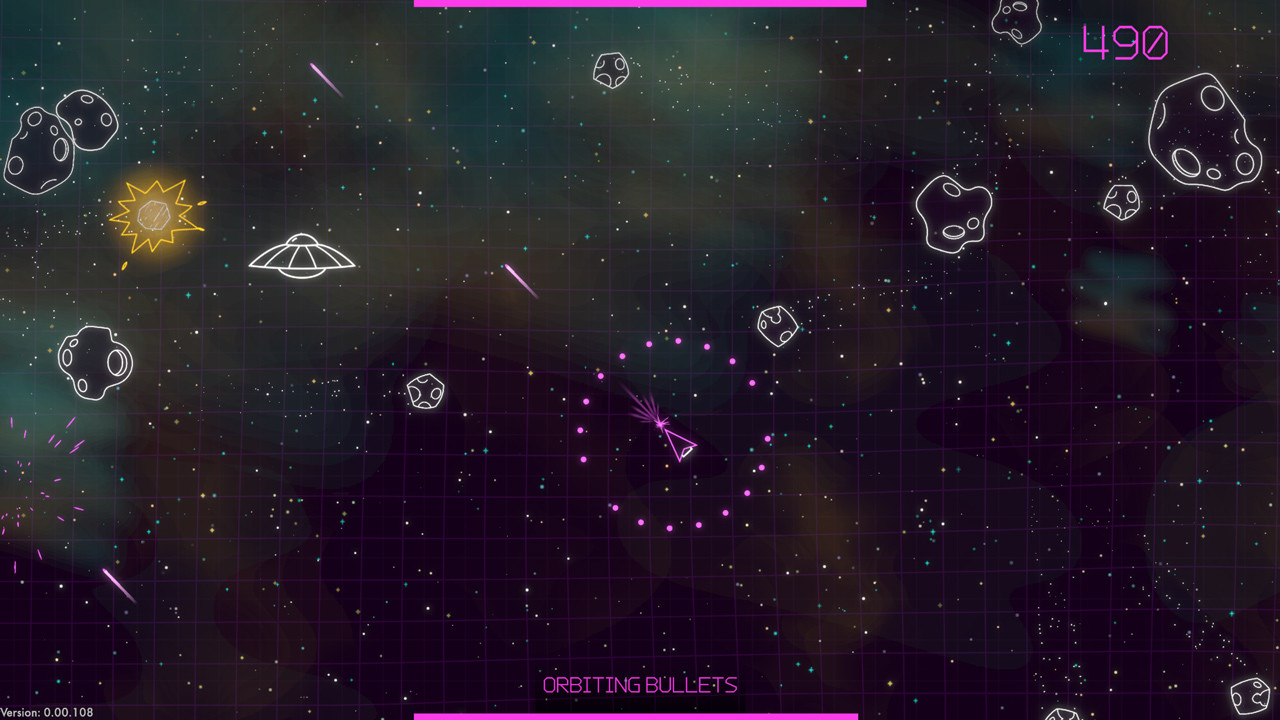 Asteroids: Recharged, like the rest of the games in the Recharged series, plays with the formula but remains close to the arcade original.  The rate of fire for the player ship is quicker, there’s an extra-large asteroid beyond the standard large one, but most importantly there are now power-ups.  This allows Asteroids: Recharged to be more manic than the original, spraying firepower across the screen with rapid or split shots, or spawning a field of bombs to shoot with just the right timing to take out as much as possible in the chain reaction of its explosion.

The other big change to the formula is the same as the rest of the Recharged series, and that’s the way the standard mode is played as a single-life challenge.  Instead of the clearly-defined levels of the original, new asteroids float in from the sides of the screen in waves, with each one getting more intense.  The standard rocks are joined by fractured asteroids that shatter into a number of the smallest ones rather than divide in half, while other asteroids have spaceships embedded inside that if not destroyed first, will start shooting almost as soon as they’re freed.  Add in a few exploding asteroids and the screen quickly becomes crowded with threats and opportunity, once the game has ramped up enough to be interesting.  The problem is that this takes a while, with each new run having a minute or so of what’s basically dead space before the fun situations kick in.  The single-life run means it needs to start slow to avoid an average game-time measured in seconds, but when you know what you’re doing the early sections are just killing time rather than actually playing.

The Challenge modes tend to get busy quicker, with each one being a predefined setup with its own goal to complete.  Get a target score, survive for a period of time, destroy X number of asteroids, etc.  The challenge is defined with a specific level layout, though, and that includes the type of powerup you get.  One challenge may open with a swarm of small asteroids coming in from all sides but also instantly give a powerup of a rotating bullet shield, while another level only drops single-shot mega-lasers that instantly destroys everything they touch when fired.  The challenges play with the Asteroids setup in a good number of interesting ways, but you can also blow through them all in a sitting or two, and after that it becomes a fight for leaderboard dominance on your favorite ones. 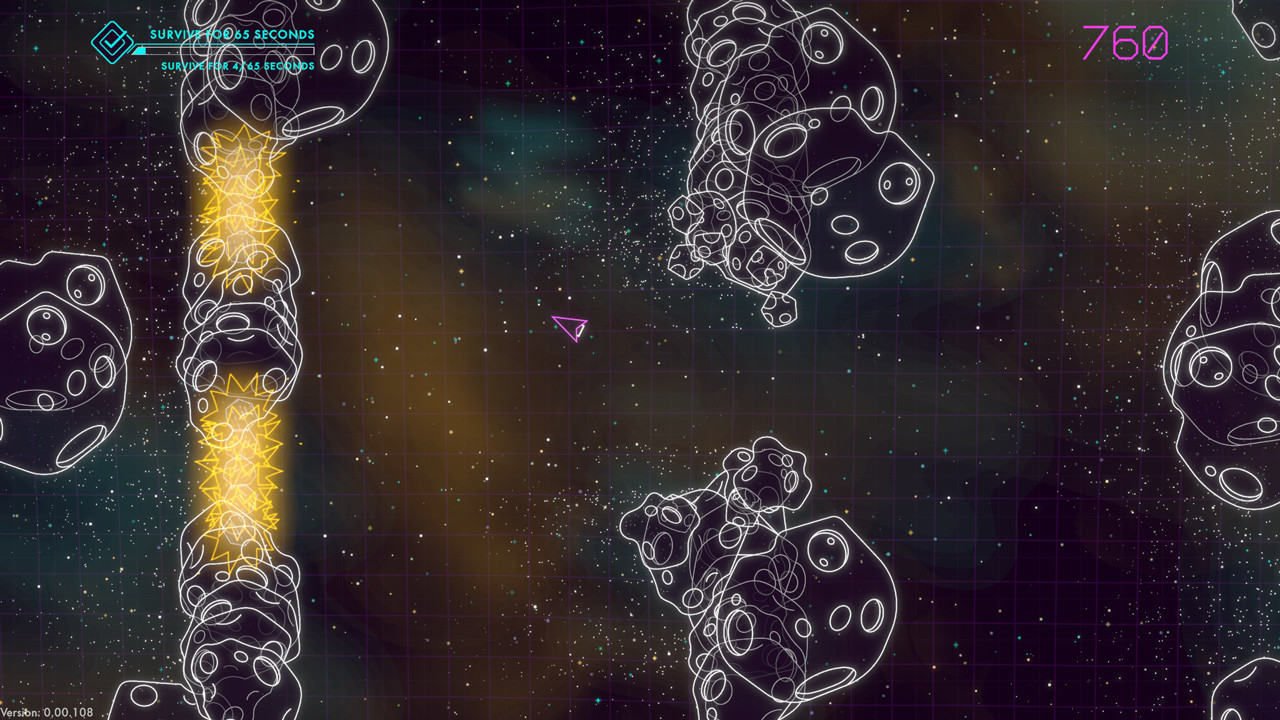 While Asteroids: Recharged is a decent update of the classic game and is a welcome return for the series, it’s also not as effective at tugging on the nostalgia strings as the previous Recharged games.  Asteroids as a formula is well-traveled ground, and it’s hard not to miss the long-gone Spheres of Chaos while playing.  It’s a good update to the game with all the same features and pitfalls of the others in the Recharged series (three games in and the leaderboards still need a way to scan through them rather than be stuck seeing just your own score and those around it) but there’s a lot more “been there, done that better” going on here.  Ignoring that for the sake of focusing on just Asteroids: Recharged, though, it’s great to see the series live again as a nice bite-sized snack of classic shooting action.