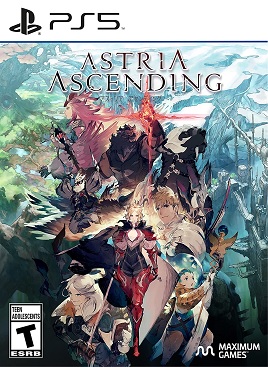 Some jobs suck. There are those that feel like they are devouring time with no tangible reward at completion. There’s others that pay terribly, making one feel undervalued for the effort put in. Then there’s the kind that gives the employee magical powers for three years, with the retirement plan being death after said three years. That latter is the one that the demigods of the 333rd find themselves facing. Chosen for various reasons by those that do so, the Fated Eight of Artisan Studio’s Astria Ascending a nearing the end of their term of employment. Facing down their final three months of life, they’re trying to put their affairs in order, only to have a world-changing crisis crash into their lives.

In this unique fantasy world, the citizens are expected to maintain the harmony of the world by eating a fruit called harmelon. By all accounts, it’s a tasty treat that is freely provided. There are those that have recently decided to cut the magical produce from their diet, causing the statues of the guardians to come to life and begin wrecking up the place. Additionally, monsters known as Noises invade various towns and settlements, destroying homes and lives. It’s up to the demigods to help the towns and restore the harmony of the world before their time is up. Still, one has to baffle at a personal decision to forego a freely provided, safe way to keep not only oneself, but those around them healthy. Sure, there are explanations that this decision is about freedom, but it seems like a far-fetched plot since no one can be so willfully ignorant. It seems pertinent to mention that this game has been in development for two and a half years.

Joking aside, the plot does manage to be interesting enough to pull the player through to the end, but it has troubles. It starts off by bombarding the player with way too many capitalized nonsense words, making the initial immersion a chore. Some of the terms can be picked up through context, others by skimming through the journal menu, but too much at the beginning is obscured by a procession of pointless gibberish to leave the player behind. It’s not the fal’cie/l’cie goof-a-rama of Final Fantasy XIII, but it starts to reach there. Compounding this is the lack of real characterization of the protagonists. They all do get their personal moments, but a real connection is never built with the heroes. The setting is a built-out world with unique fantasy races that avoids the elves, dwarves, humans tropes, which is great. The result is a threadbare feeling tale where the player never truly cares about the next plot point. Fortunately, there are extremely compelling elements that keep the player glued to the screen. 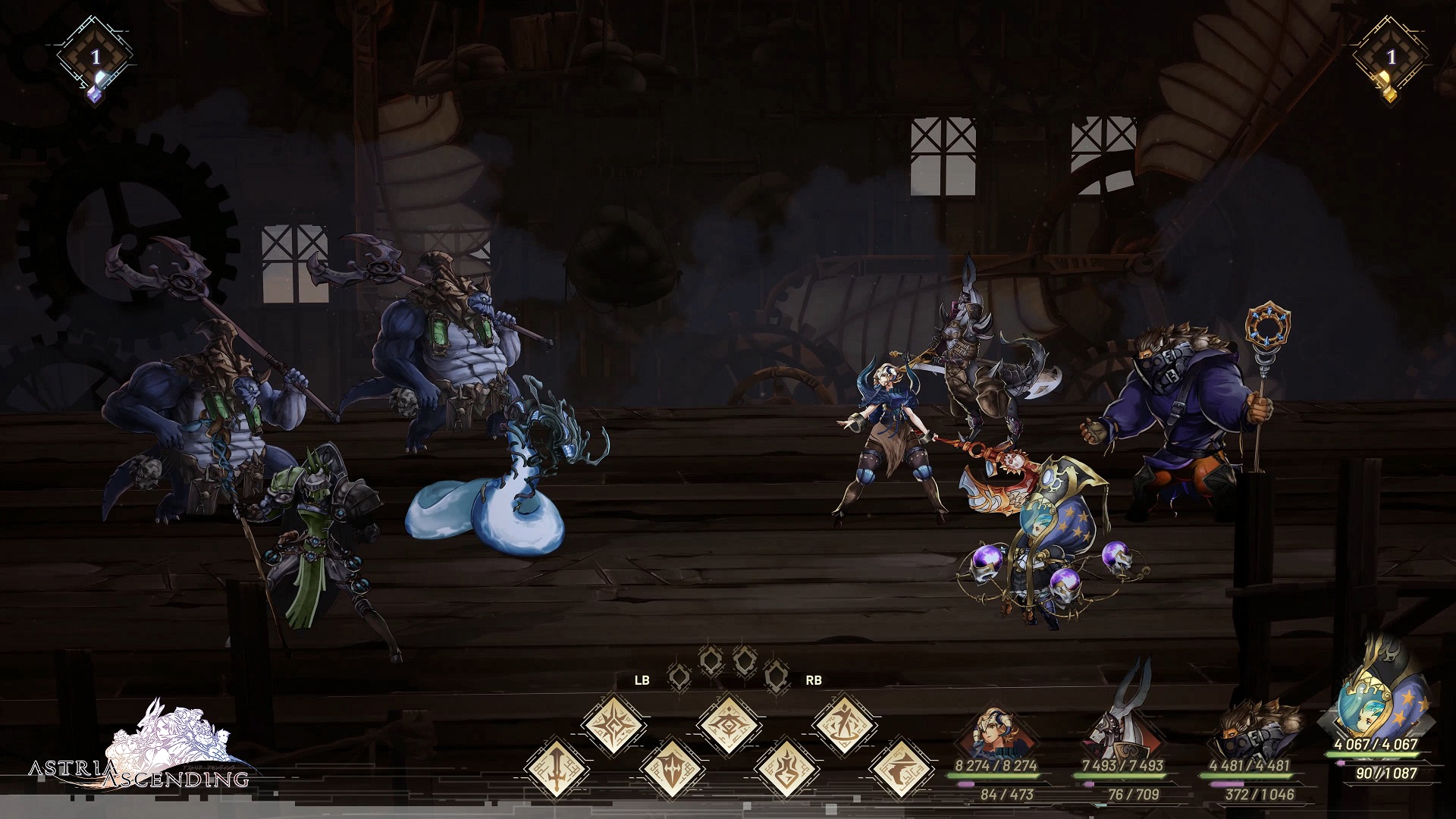 Starting off has to be the battle and character progression systems. On its face, this fighting is a throwback to NES/SNES era Japanese RPGs. In a typical turn-based fashion, the player trades blows with a foe or foes, exploiting elemental weaknesses and making tactical decisions balancing the need for conserving magic points and unloading overwhelming attacks on the pitiable creatures that venture in front of them. Added to this is a Focus Point system reminiscent of Bravely Default. Attacking an opponent’s weakness generates focus points. Blundering into an enemy’s strength reduces the pool. Additionally, a hero can spend a turn to generate a point for the pool. Spending these points in battle gives some extra oomph to the move. So, even if there’s only one party member that can be directly effective in a fight, everyone can still contribute.

With the flexibility of the character progression, however, it would require a remarkable amount of skill to be left with only one hero up for dealing damage in a particular fight. Over the course of the game, each hero can have up to four jobs assigned to them. Each job has its own Sphere Grid style skill tree, each with unlockable powers. In the case of the heroes’ primary two jobs, stat boosts can also be unlocked. Combining this with the ability to swap out the battling heroes with someone on the back line mid-fight means that there’s always a viable option to surmount a challenge. A personal favorite is pairing a hunter with a black mage. Using the hunter’s ability to swap enemy weaknesses with the mage’s ability to drop a magical attack on all enemies at once, racking up the Focus Points and completely ruining the Noises’ day manages to be satisfying. Playing through on Normal difficulty is the perfect balance between challenge and relaxation. 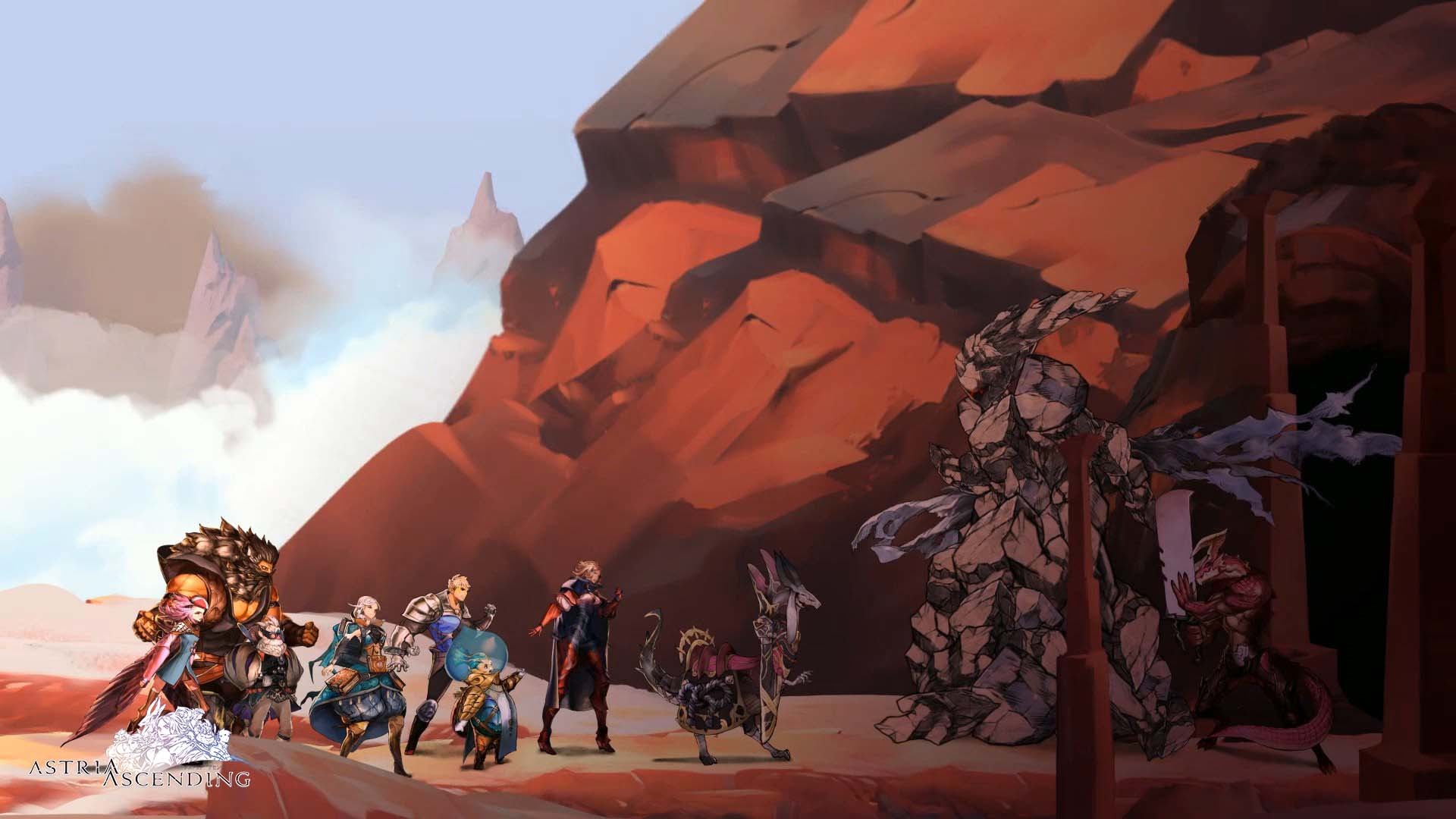 While the plot is interesting enough without being completely engrossing, the art style is of such an astounding quality to demand the player see it through. These are highly-detailed, hand-drawn characters and monsters that capture the imagination. A typical sandworm pulses with life. Spell effects fill the screen with vibrant colors and animation. The heroes’ and enemies’ personality shines through in the art alone, with the stylized animation selling it. Much of the game is spent in anticipation of what next marvel the game has to offer, and it does it without oodles of money and hundreds of artists. Fans of Vanillaware games will see familiar influences, with quality matching or even topping that cult developer.

Dungeon layouts, on the other hand, don’t fare as well. Exploration is done on a 2D platforming style, with light Metroidvania style exploration elements built in. The issue lies in the fact that many of the rooms use the same art assets, making one question where they are in relation to their destination. Couple that with a map system that’s hard to read due to connecting lines being too transparent, as well as a lack of detail or waypoints, and too much time is spent retreading old ground trying to figure out where the game wants the player to go. During my playthrough, I did realize that the teleportation system proves helpful. If the general area is known, such as the Blazing Lands, then it’s a good idea to warp to a previously-unlocked warp point and poke around one room in any direction. If the way forward cannot be found, check a different warp point in the same area. Doing this will likely lead the player to the next mainline destination. For some of those side quests, though, all bets are off.

The frustration from wandering around is exacerbated by the speed in some of the bog-standard mob fights. A battle is initiated and a swarm of enemies appear. Depending on the initiative, one might need to wait while the twerps putter laboriously through their opening moves before the player is able to deal with them. A way to speed up the pace of the fight would be welcome, and cause the feeling of being lost to not be as frustrating. Sure, many of these fights can be skipped by jumping over the blue blob that represents the baddies in the overworld, but there are times when they cannot be bypassed due to a low ceiling. Even with the ability to instant win fights against groups ten levels or more lower, the pace can be crushed, especially compared to the zippier fights found in an SNES Final Fantasy. 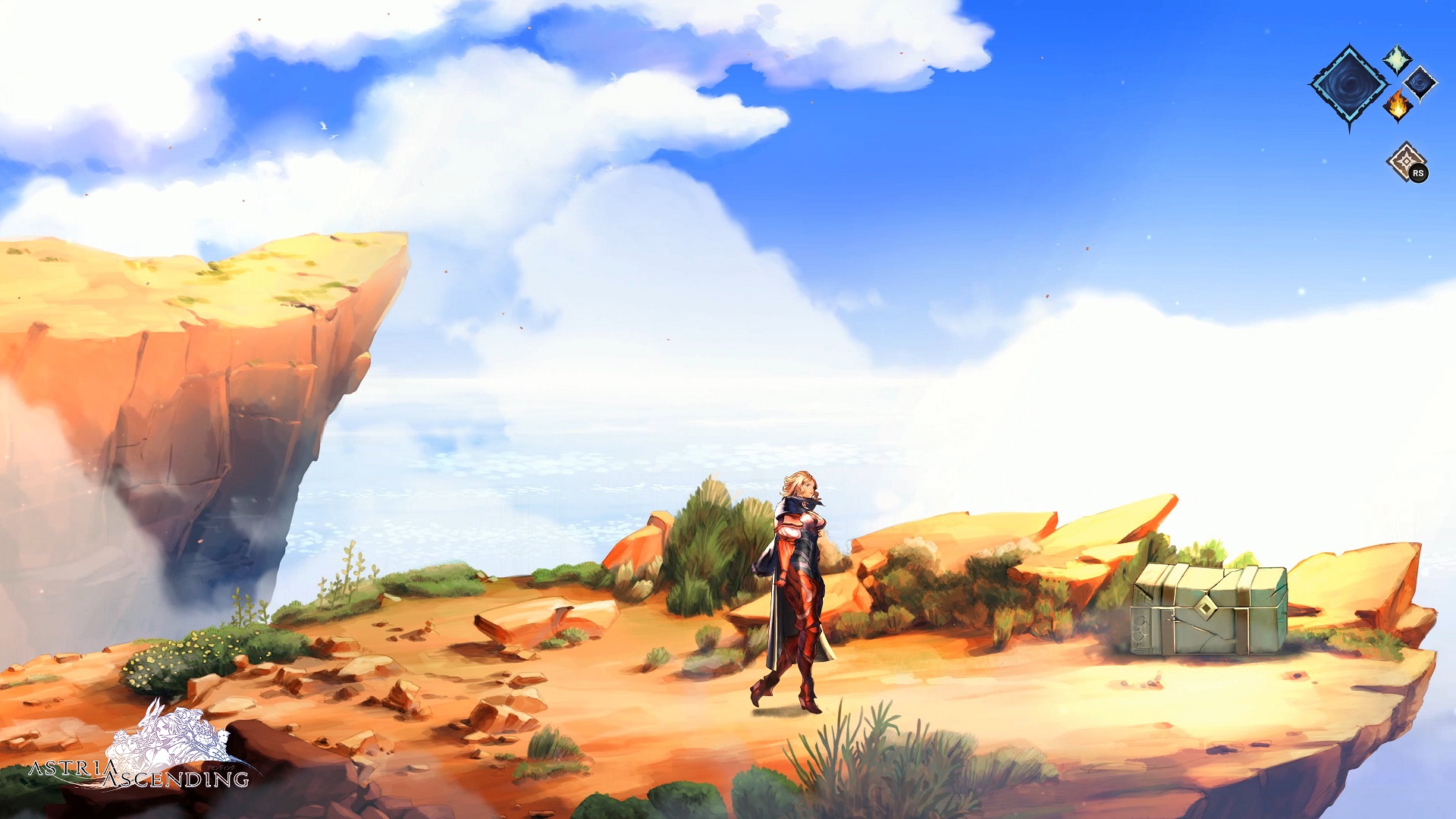 For the final complaint about a fun game, one need only look at the English voice acting. As an English speaker of middling talent who does not know Japanese, I opted for English voices. Sadly, it seems as though the developer didn’t opt for English voice actors. This, alone, shouldn’t be a problem. Astria Ascending takes place in a world with a large amount of sentient species; it wouldn’t make sense for all of them to speak the same language natively. Accents and whatnot are no problem, but words that aren’t even close to being properly pronounced are.

The developer clearly stated that the Japanese voiceover is the preferred way to play, but the English track was included in the game, so it might have been better if they cut their losses and didn’t include the track. I wouldn’t have been able to complain about the Japanese voicework since I don’t know Japanese. Ignorance would have been a savior.

Of course, the pronunciation is being picked on when there are more glaring issues with the voicework being flat or annoying. I decided to discuss what I found more interesting. Coincidentally, this is the same reason that the lacking 2D sidescrolling shooter minigame or the card-flipping CCG built in are being sidestepped; they’re there but not worth the interest. In the case of the shooter part, it’s bad, but mercifully brief. 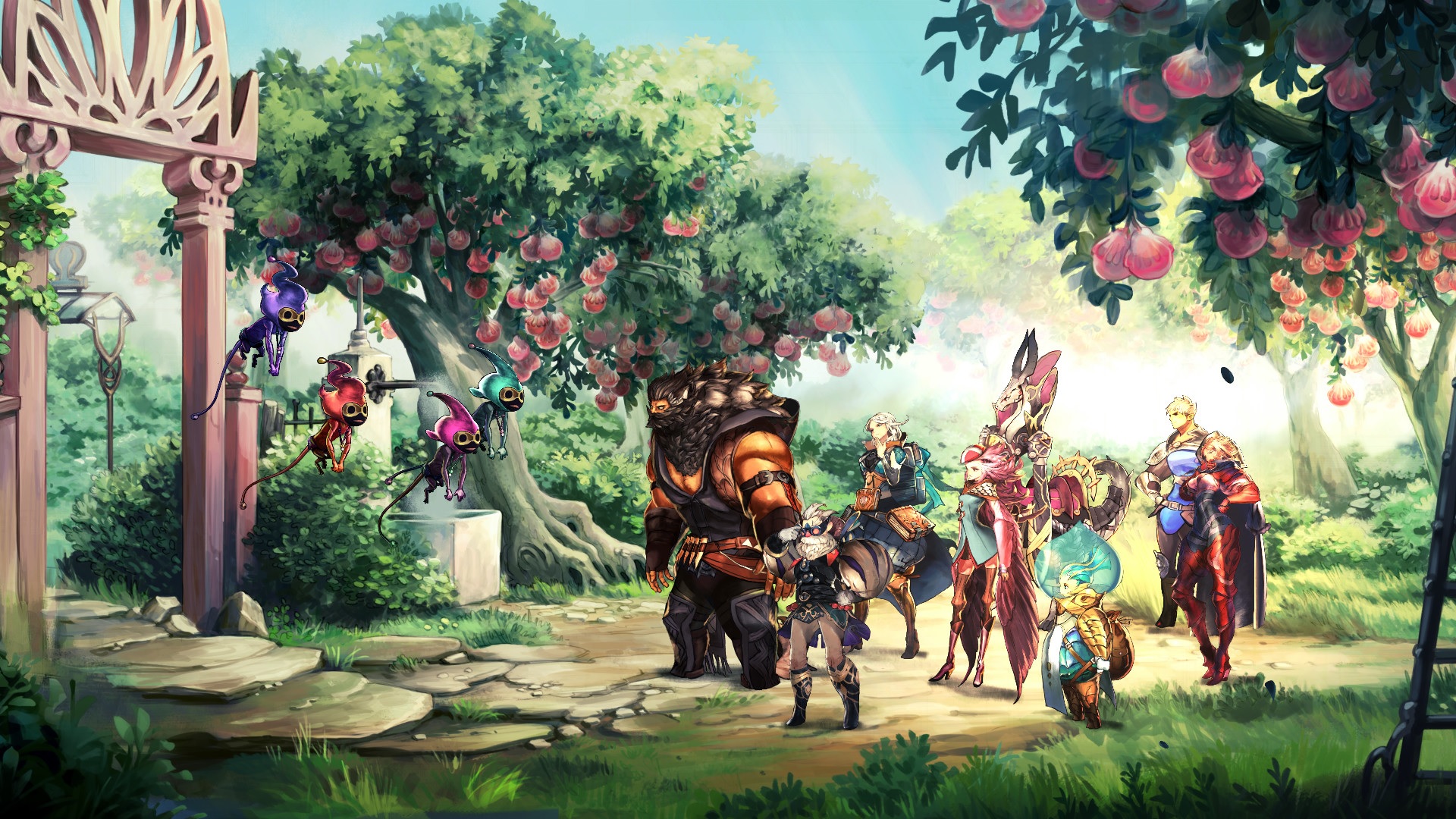 For a game with so many valid criticisms, a recommendation might not seem forthcoming, but Astria Ascending rises above all of these issues as a total experience, with the art alone making worth the price of admission. The character customization gives a feeling of constant, incremental progress that fulfills the effort put in. There’s always a new skill to learn, a new strategy to try. It would have been nice if the story was better and if the dungeon exploration was less frustrating, but this is a game that’s well worth the time for any fan of JRPGs, especially since it’s being sold at a lower price than most new titles. So long as the player knows what they’re getting into, then there’s too much superlative stuff in this package to ignore.