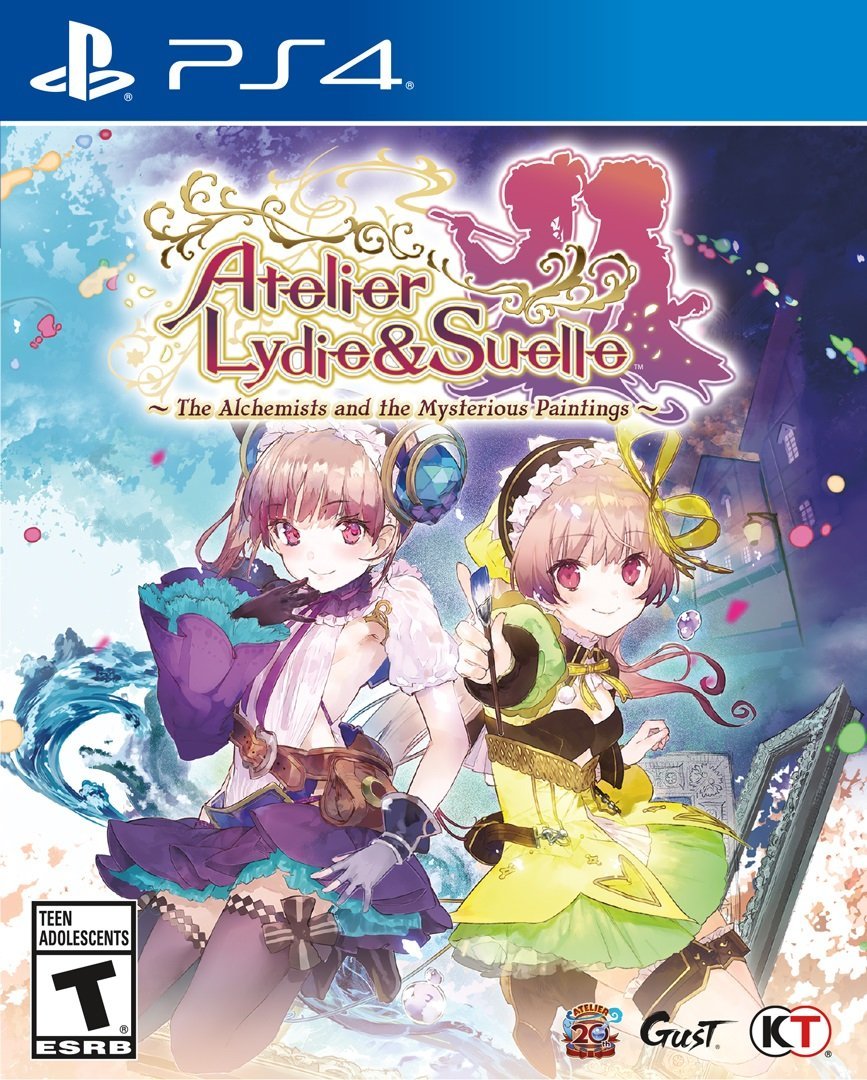 Atelier Lydie & Suelle: The Alchemists and the Mysterious Paintings

They say a picture is worth a thousand words. A thousand words could be worth quite a lot, but in Atelier Lydie & Suelle: The Alchemists and the Mysterious Paintings, those words amount to hardly anything when compared to everything else a picture can provide. The twin alchemists starring in this 19th entry of the Atelier series, Lydie and Suelle, discover this for themselves one day when they discover an unusual painting in their basement and are subsequently transported to the fantastical world within it. This is where most RPG quests would kick-off, but it’s not quite that simple here. While the story of Atelier Lydie & Sulle does start gaining steam after this, it’s not treated as the life-altering event one would expect it to be. See, the twins have a goal: to run the best atelier in the Kingdom of Adalett. A living painting is interesting and all, but they’ve gotta get right back to work if they want to see their dream become reality. One doesn’t become a master alchemist by wandering around in strange paintings all day…or do they?

Much like its predecessors, the story of Atelier Lydie & Suelle is a bit different from its JRPG brethren. There are no demons to defeat, empires to humble or worlds to save here. Instead, we have two girls struggling to make ends meet while their doofus of a dad whiles away his time on whatever creative action strikes his fancy. Their mother is no longer with them of course, so it’s on the twins to make things work as they admire their friend Lucia’s successful atelier and dream of doing even better than her someday. It may sound like the girls have it rough, but it doesn’t actually seem that bad based on how they’re treated around town and their own attitudes regarding their situation. Struggling or not, the opportunity to make their dreams come true appears in fairly short order. Shortly after their foray into the odd painting, the Kingdom of Adalett implements the Atelier Ranking System, allowing any qualifying alchemist to register. The higher one’s rank, the more prestige (and money) one gets. Needless to say, Lydie and Suelle sign up and the rest of the game is spent climbing the ranks as they aim for the top.

Raising Lydie and Suelle’s atelier rank is driving force behind progression in this game. Earning promotions brings new characters into the mix, opens up new painting worlds to explore, triggers new side-stories and unlocks new crafting recipes to try. Be it running a job for another character or blazing a trail through a new painting world, however, just about everything seems to lead back to crafting. This might have been annoying in games featuring more simplistic crafting systems, but not so here. Gust has had a long time to fine-tune their crafting mini-game and it shows in Atelier Lydie & Suelle. 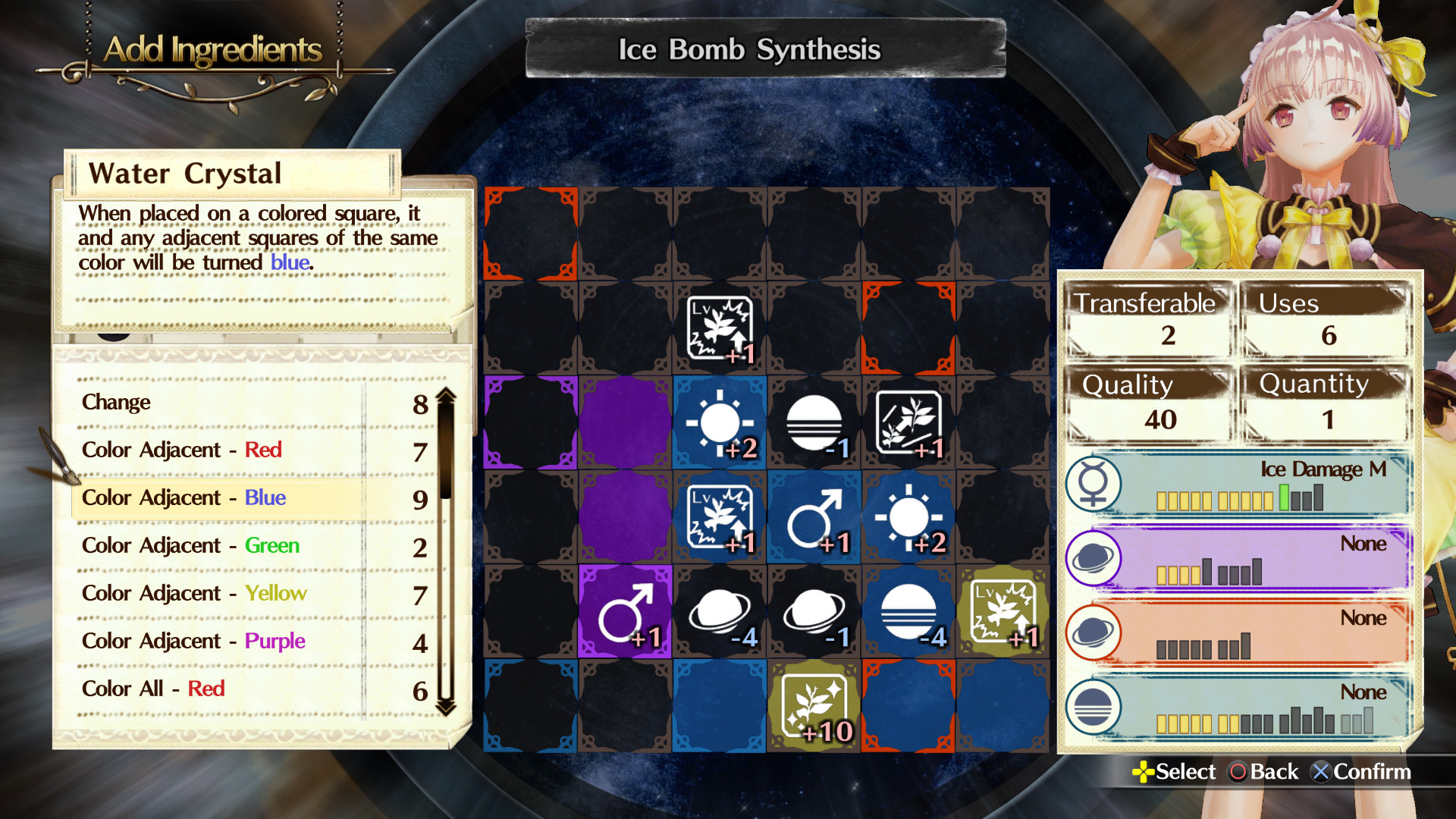 Most crafting is accomplished via the large cauldron in the twins’ atelier. Once one has the necessary ingredients for their desired item, they need only walk up to the cauldron and begin the game. Crafting plays out on one of several grid patterns with colored squares, squares that can also be imbued with bonuses if one chooses to use an additional ingredient as a catalyst. Each ingredient offers specific colors and shapes to work with, and each square filled on the grid increases the item’s quality. Overlapping ingredients means losing their quality points, so creating the best items takes a bit of planning and puzzle solving skill. The system works well, and the integrated encyclopedia does a good job of keeping track of discovered ingredients and their properties. Sometimes, but not always, it’ll provide clues as to what sorts of ingredients are needed for a new recipe. The only real knock against it are that there’s no option to craft items in batches.

Unlike some past Atelier games, time isn’t really a factor in Atelier Lydie & Suelle. It seems like it should be since the game takes every opportunity to warn players that their actions will cost them time, but there are very few negative consequences to watch out for. Different monsters spawn at different times of day, and quests from the notice board have a time limit, but that’s it. Main and sub-quests aren’t timed, and the townspeople never leave their assigned areas, so time is largely meaningless. Many will surely see this as a plus since it allows one to craft to their heart’s content, but those who enjoyed the timer mechanic in past games may find themselves a bit disappointed by the version employed here. 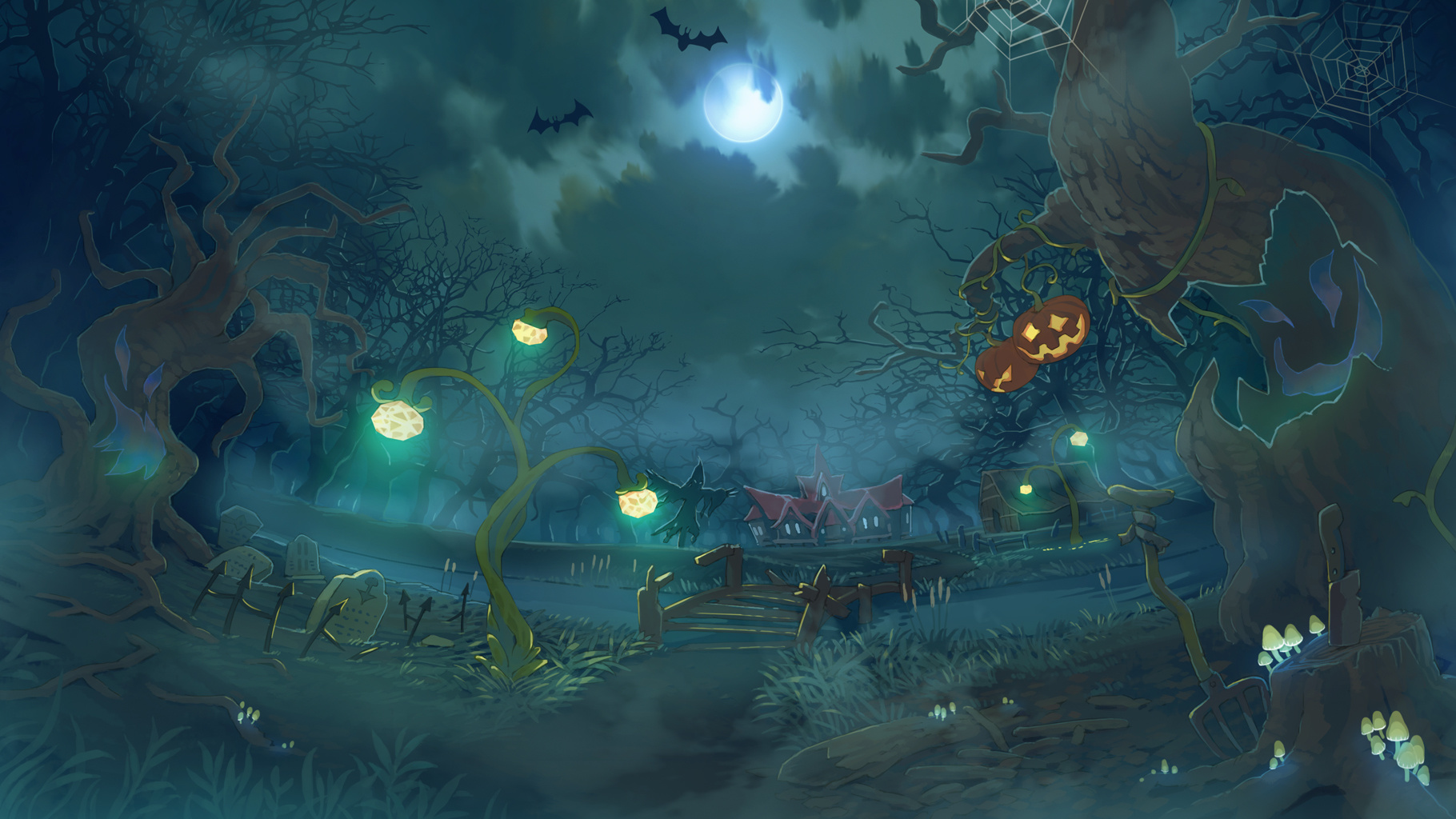 It’s just as well that time isn’t a factor here though, because its reduction is what allows one to stop and enjoy the world on display here. Atelier Lydie & Suelle isn’t all that pretty technically in a technical sense, but it makes up for that with plenty of bright colors and an unflinchingly pleasant attitude. The Kingdom of Adalett is a place awash with sunshine, bright colors and happy citizens. It’s such a pleasant place in fact that several familiar faces from the previous games in the Mysterious sub-series have relocated their atelier to Melveille, the kingdom’s capital and home to our alchemist twins. There isn’t as much reason to interact with the townsfolk as there was in previous Atelier games, but moving about the town is still worthwhile thanks to many short cutscenes, most of which one can’t help but smirk at. The worlds within the various “mysterious paintings” carry a similar aesthetic. The each have distinct themes such as “spooky world” or “ice world,” but they all have a similar air of whimsy about them. There’s nothing here that most gamers haven’t seen before, but it all comes together to create a very relaxed atmosphere.

Crafting may lie at the heart of this game, but crafting can’t happen without ingredients. Just about everything can be useful as an ingredient, from bits of garbage paper to golden statues of oddly muscular men. The best components are going to come from monster drops though, and that’s where Atelier Lydie & Suelle’s combat system comes into play. For the most part, combat follows the standard turn-based mold most JRPGs adhere to. However, it does have a unique wrinkle or two to appreciate.

Keeping the twins healthy is a major priority in battle. Once they gain party members, those characters can step in at any time and take hits meant for either girl. The party can also be formed up into attack and support pairs, attackers in the front and supporters in the back. Supporting characters don’t take turns, but they will chain attacks and support magic whenever their partner triggers meets certain conditions like using a skill or taking losing 5% of their HP. Supporters can also be swapped to the attack position without losing a turn. The most notable addition to the games combat is the “Battle Mix,” a support ability that allows either twin to instantly craft a unique item in the middle of battle. The created items aren’t as strong as those made the traditional way, but they work well in a pinch. It’s a bit underutilized in the beginning, but becomes more accessible as more tools and skill are unlocked. Overall, the system is fun enough to keep the combat interesting, but not quite enough to make one want to spend extra time with it. 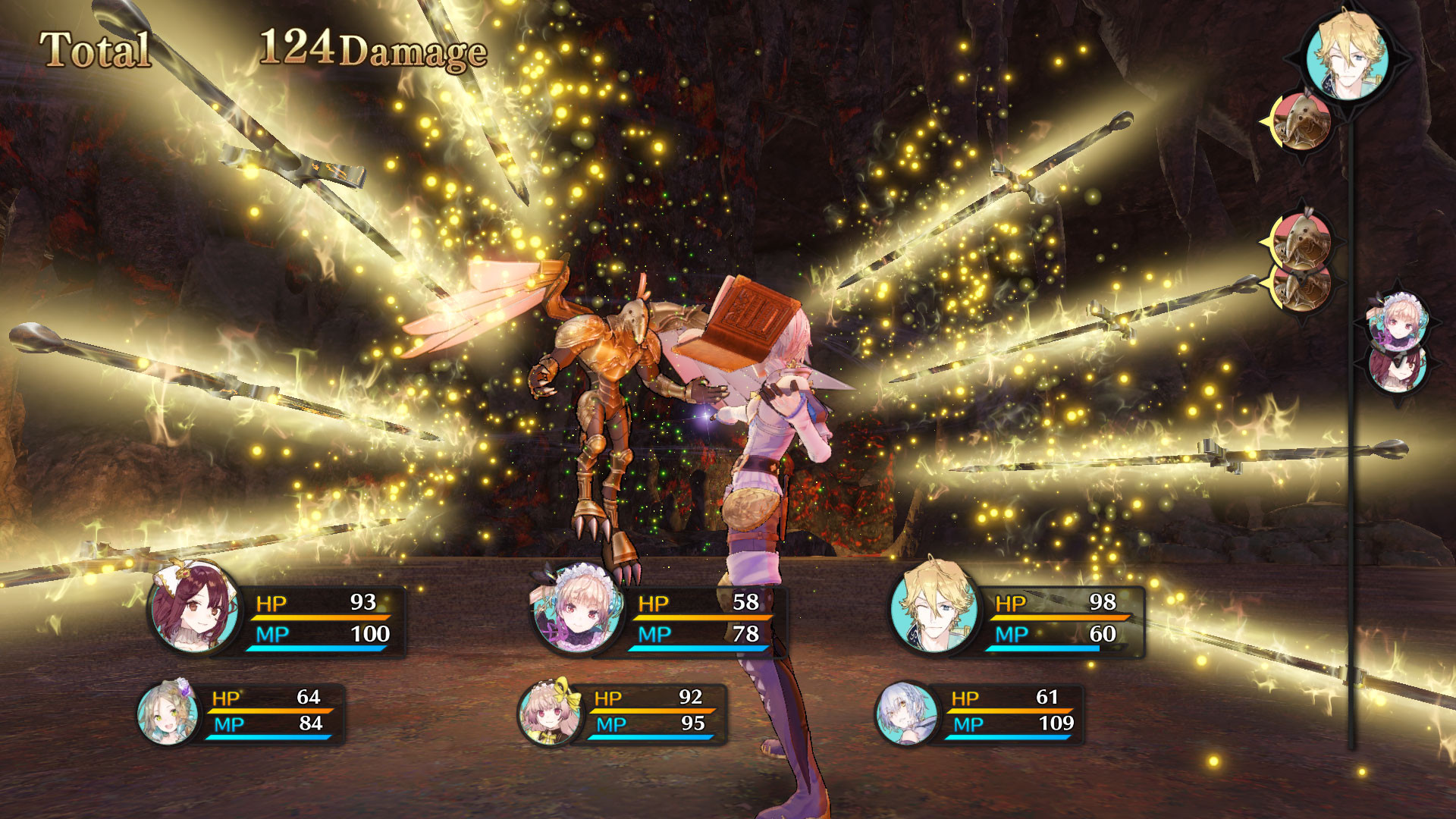 Atelier Lydie & Suelle: The Alchemists and the Mysterious Paintings is the kind of game that’s best played when one just wants to sit back and relax for a while. Its lack of urgency combined with its liberal use of bright colors, upbeat musical tones and exceedingly optimistic characters make for an experience that can’t help but inspire a faint smile. Combat is varied enough to keep the perpetual hunt for ingredients from becoming stale and the quest to craft the perfect item is enjoyable enough to make those hunts worthwhile. The Atelier series is celebrating its twentieth anniversary this year. This entry doesn’t do anything revolutionary in honor of that, but that might just be the point. It’s just more of what the series has always offered and has thus far succeeded with. Existing fans will enjoy this one just as much as previous entries in the series, and any interested newcomers will get a good idea of exactly what they’ve missed out on thus far.