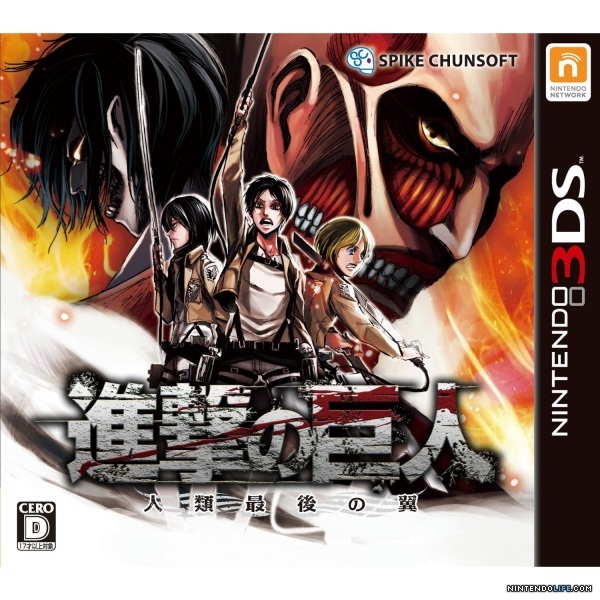 Attack on Titan: Humanity in Chains

If there’s one anime that seems tailor-made for video game success, its Attack on Titan. The series’ gruesome action and intriguing technology make it an easy candidate for an exciting video game adaptation, but somehow Spike Chunsoft has squandered much of its inherent appeal with the digital-only Attack on Titan: Humanity in Chains. It’s a disappointing and halfhearted effort that, while still appealing to fans, is ultimately an insultingly shallow experience.

In Attack on Titan, humanity has been forced to erect a series of enormous walls around itself in order to keep out the Titans, hulking creatures that bear an unsettling resemblance to humans. Humanity is safe for a time, living peacefully within its walls, until one day a Colossal Titan, far larger than any titan seen before, breaks through the enclosure and allows the hordes of titans outside to infiltrate the human refuge. Eren, Mikasa, and Armin, the game’s three primary protagonists, escape the ensuing madness and enlist in the Cadet Corps to become soldiers against the titan menace. Millions of fans were captivated by the graphic action and solemn tone of the manga and anime, and luckily much of that raw emotion is preserved in Humanity in Chains thanks to liberal use of video and voice clips from the show. Unfortunately, the written mission descriptions soften the impact of those cinematic moments with lifeless writing and confusing shifts between third and first person, the beginning of a mountain of issues plaguing Attack on Titan: Humanity in Chains.

The game is split into two primary types of play: Store Mode and World Mode. The former follows the events of the show, giving players control of Scout Corps members Eren, Mikasa, Armin, Sasha, and Levi in a variety of missions involving slicing titans to pieces. Their individual narratives intertwine so that the player is forced to frequently switch between them, a decent idea in theory that ultimately falls short in its execution. For starters, many times progress in one character’s campaign will be impeded until missions are completed in another’s, which often means getting slapped with a near-identical mission to the one completed just prior. That might have been forgivable if the characters boasted any noticeable differences between them, but unfortunately they’re hardly anything more than cosmetically unique skins on the same acrobatic body. Even that might have been forgivable if the missions themselves were consistently fun to play, but once again Humanity in Chains lets its players down. 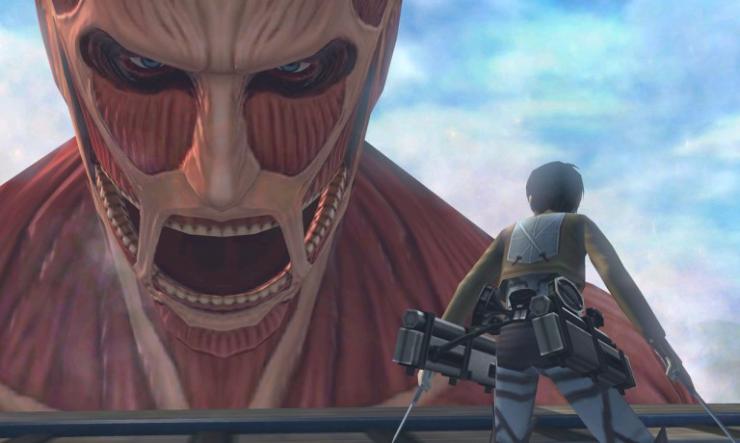 Missions switch between standard titan-killing tasks, fetch quests, horse-riding courses, and titan-on-titan fisticuffs. They’re spaced out fairly well, but even that can’t save them from quickly turning stale. Humanity in Chains’ biggest issue is that it’s far too mechanically shallow. Spike Chunsoft somehow squandered the inherently awesome Omni-directional Moving Device and razor-sharp sword combination that made the Attack on Titan manga and anime so cool, watering both down to nothing more than a single button press each. It still feels fairly awesome to jet around town with your OMD, but the movement is so clunky and unpredictable that it’s hard to get a grasp on any real technique. The OMD is a ridiculously flexible and precise device in the source material, and while I understand it’s a tall order to replicate that freedom of movement in a video game there’s little doubt Spike Chunsoft could have done better with its implementation of the unique gear. As disappointing as that is, however, the actual combat is on another level entirely.

The actual attacking of titans is watered down to a series of quick-time events, while there are only a handful of pre-determined points on each enemy that you can really slice. What this means is that each and every encounter with a titan boils down to the same routine: press one button to launch towards the titan’s ankles, press another to begin an attack, press it again to finish the attack, and then repeat on the nape of the titan’s neck to finish it off. That’s literally every titan fight. Where is the chaos, the unpredictability, the spectacle of the titan fights in the show?  Simplifying such a central component of the experience to that degree is absolutely inexcusable, and completely kills the satisfaction of felling an enemy ten times your size. There are countless alternatives to the combat design Spike Chunsoft decided to implement, and quite honestly the direction the developer chose is woefully uninspired.

Attack on Titan: Humanity in Chains tries its best to make it appear like there is some small element of strategy or complexity to its gameplay, but underneath the items and meters is nothing but a skeleton of a game. Sure, your blades can dull and your gas can run out, but when you begin each mission stocked with six times what you’d ever realistically need is there really any point in implementing those mechanics at all? They end up posing nothing more than a momentary distraction, an annoyance more than a case of resource management. Yet again, Humanity in Chains stops halfway on the road to decent game design. 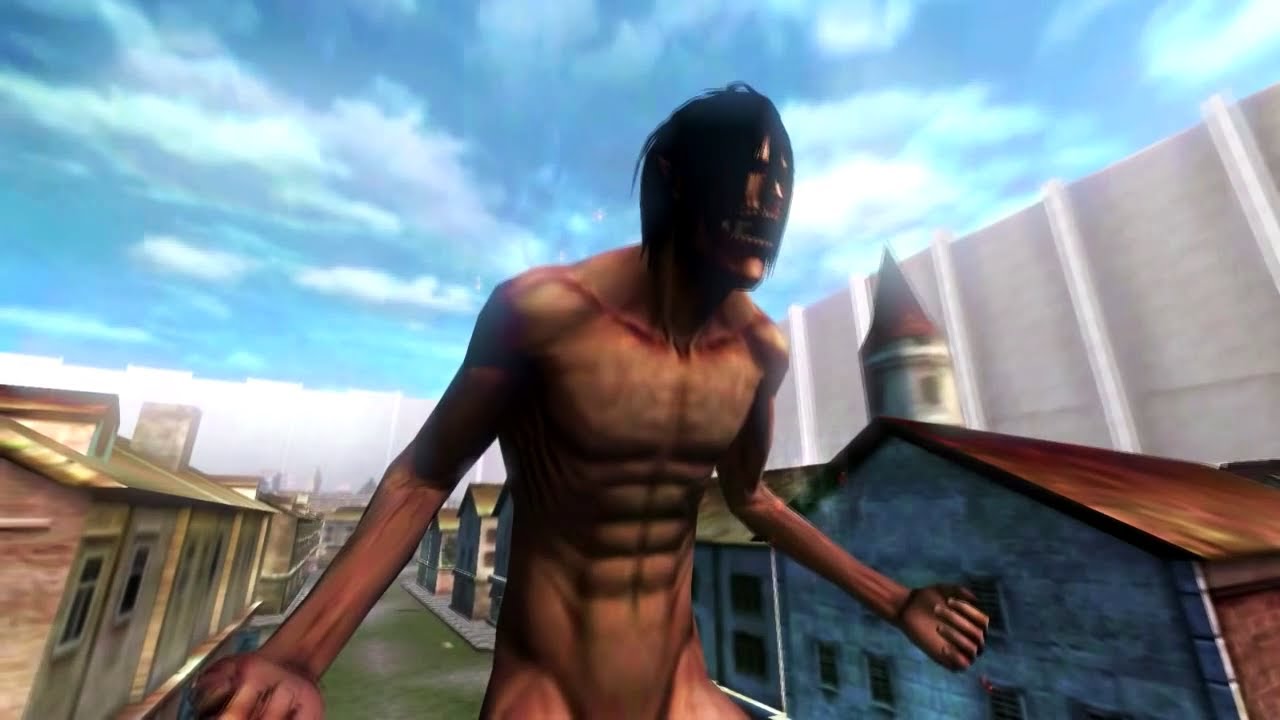 The game’s World Mode, on the other hand, is at least a  slightly more attractive prospect. Unlocked after a certain number of Story Mode missions are completed, Humanity in Chains’ second mode takes the hunt online, letting players embark on their own or team up with other players or computer-controlled characters to kill titans in a series of increasingly difficult missions. It’s immediately more robust than Story Mode, thanks mainly to the addition of a leveling system and the ability to upgrade your equipment in exchange for gold collected after missions, and makes Story Mode feel like a glorified (and needlessly extended) tutorial. Players can customize their appearance using face and hair pieces unlocked throughout the game’s various campaigns, but once again the system is lacking the depth and complexity of more robust online experiences. There is at least a fair amount of replayability and mission selection in World Mode, so players who find themselves enjoying Humanity in Chains’ simplified Attack on Titan experience will have plenty to do.

Taking control of Titan Eren might have been the saving grace for Humanity in Chains, but again Spike Chunsoft somehow fumbles a seemingly simple video game adaptation. Like the game’s regular combat, fighting with Titan Eren is simplified to a single button, taking the guess work, strategy, and most of the fun out of what I hoped would be a highlight. Alas, these portions of Humanity in Chains were as forgettable as the rest, and only emphasized just how terribly Spike Chunsoft adapted the exciting, action-packed source material of Attack on Titan.

The one thing Humanity in Chains has going for it, however, is its looks. The game is visually quite impressive, handling the complex and fluid movements of both the characters and titans confidently and rendering a modestly sized map at a fairly consistent frame rate. It’s also a decent candidate for the shorter play sessions so often synonymous with handheld gaming, as most missions last no longer than a couple minutes. There’s even a compendium of each different titan you meet on your excursions, over 60 in all, that adds another task for players smitten by the experience to complete.  These are small victories, but they can’t hide the underlying issues that pervade Attack on Titan: Humanity in Chains. 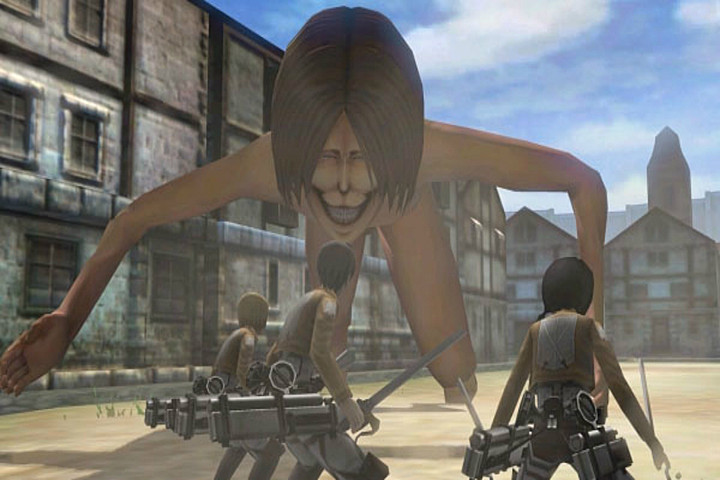 It feels like Spike Chunsoft was either too eager to cash in on the Attack on Titan fever sweeping the globe or too scared to stray from the events of the show to take any real chances on this game. Whatever the reason, Attack on Titan: Humanity in Chains is a beat-for-beat replica of the source material that somehow misses the action, suspense and tenacity that define the anime and manga. Despite a fairly expansive online component, its shallow mechanics and repetitive campaign ultimately doom it to join the ranks of the countless other mediocre licensed games.