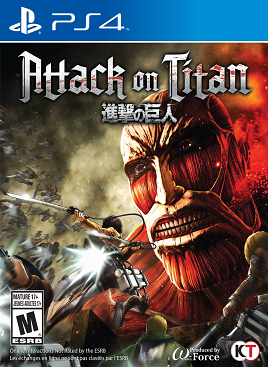 As a developer, Omega Force is know for one thing: the Musou series. The brand, containing iterations of Dynasty and Samurai Warriors, along with a host of offshoots and licenses, all focus around large battlefields with massive amounts of enemies to beat up. While each of these have their own flavor and systems, they all center around the same style of play. Sure, they have dipped their toes into a couple of other genres, but they know what they like. This is what makes their attempt at the Attack on Titan series such a surprise. It is something well outside their wheelhouse. Sure, it might have been possible to slap a Titan skin on a Warriors game, ruining both but making some money. Instead, the developer put in the work to create something interesting and unique.

Now, this retelling of the tale of Eren, Mikasa, Levi, and all does bear some of the hallmarks of the studio. Some Warriors sound effects can be heard, especially in the menu, and the introduction of the “Final Target” in the missions seem stylistically similar. There is no confirmation, but the game itself appears to be running on a heavily modified version of the tech found in Musou. However, this game is an entirely new animal, a fact that becomes immediately obvious upon taking control. Using the Omni-Directional Gear is a snap, and the player is quickly able to traverse the map, boost, and swing like a dystopian Spider-Man. Upon reaching a titan, the player presses the right bumper button to engage. From there, the five different targets available on the foe: legs, arms, and the nape of the neck (the only lethal spot) can be selected. Pressing the swing button attaches a line to the part, and the player starts reeling in, dodging and swinging at the right time to sever a limb or put the giant down. On its own, this works great.

There is even some resource management. As the player flies around and attacks, the Omni-Directional Gear runs out of gas and blades wear down and break. Pausing on a rooftop once in a while to refresh these is advisable, as is stopping by a requisitions officer as the mission goes on. As the game progresses, more items are added to the arsenal, including flash and sonic grenades, and a rejuvenating elixir. 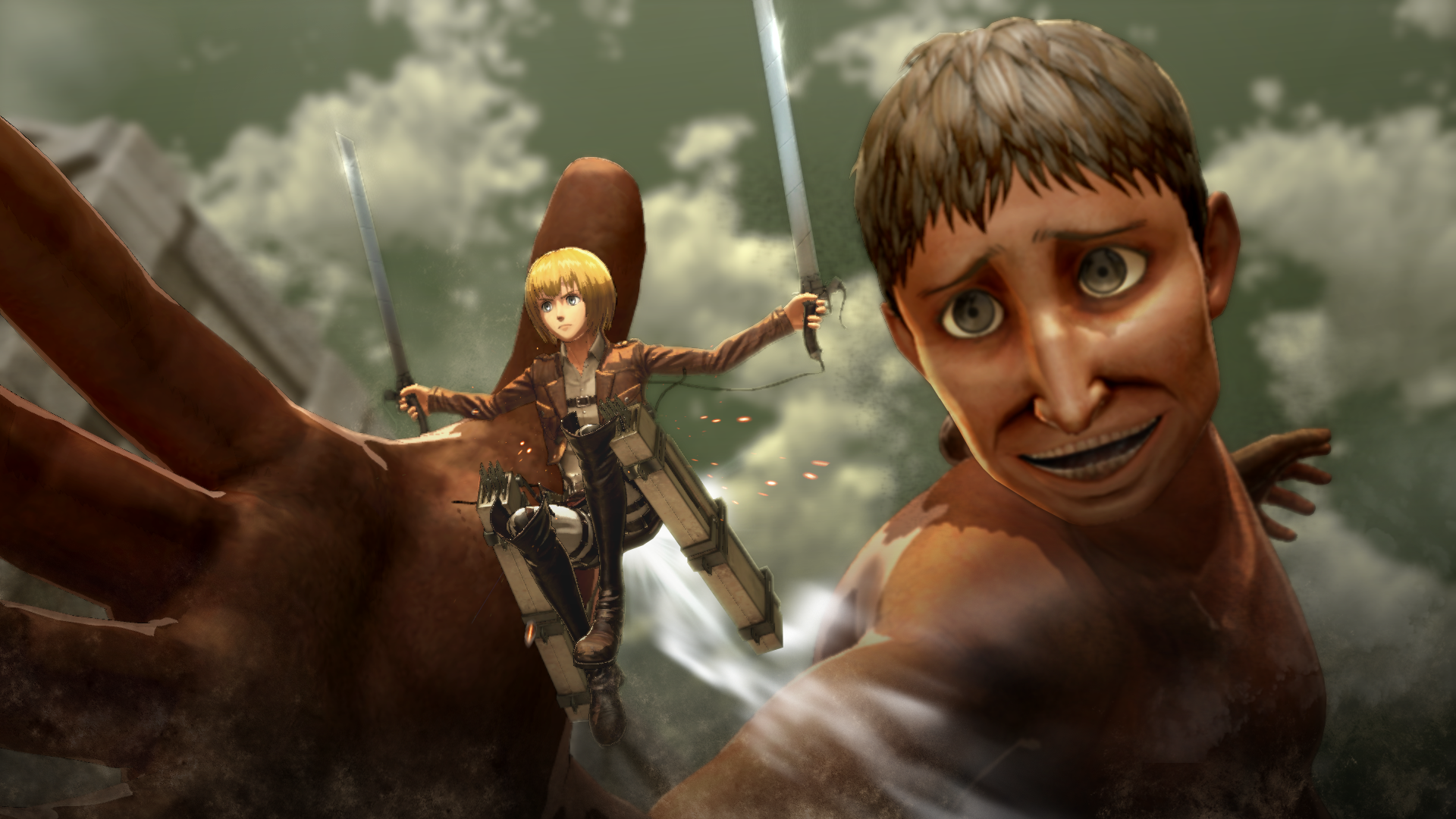 That last paragraph might make it sound like it’s possible to survive becoming a titan snack. It’s not. Yes, a player can get up after being on the receiving end of a titan slap, but getting eaten is not an event that can be walked off. This applies to other troops on the battlefield. When they get in trouble, they will pop a smoke. The player is left with trying to manage time between accomplishing a main goal and saving others. There are immediate benefits for performing a rescue, such as a new teammate or some extra equipment, but there are so many that not everyone can be saved. This just needs to be expected.

There are also upgrades that require materials to access. These materials can be earned by severing specific limbs, saving enough people, and performing well. Even more materials and upgrades can be earned in Expedition mode. This takes place outside of the main story campaign and is also where players can engage in some co-op player. These smaller missions manage to be really fun, bite sized vignettes and feature enough unlockables to keep up the replay value. It’s easy to get into a loop of working for that next statue that does nothing, but looks cool. 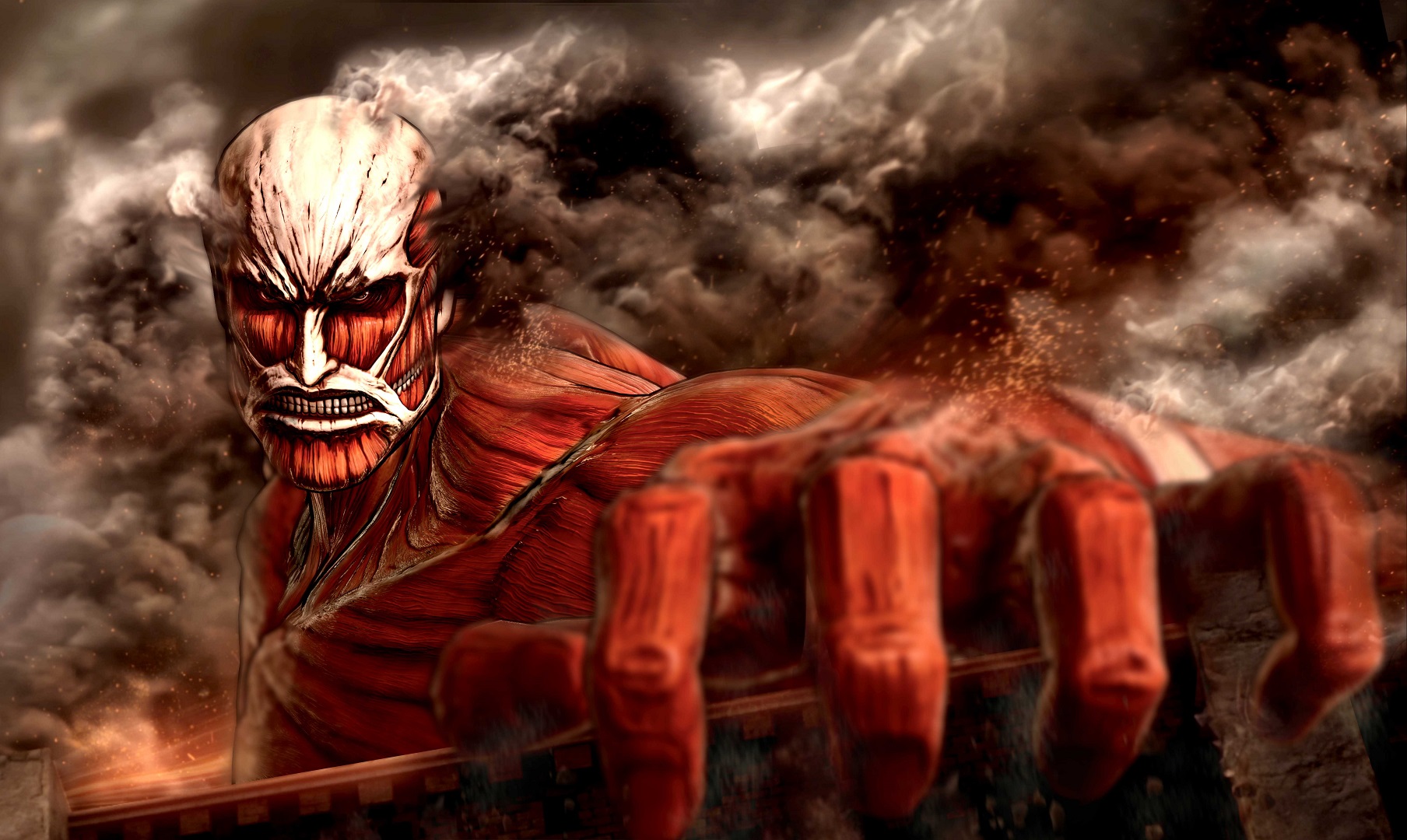 People familiar with the series might notice that some of my comments fly in the face of obvious major events from the series and manga. Rest assured that there have not been changes made. In fact, this game is the perfect starting point for people curious about Attack on Titan but haven’t checked it out yet. As such, spoilers are being avoided. The way the story is put together makes sure that even the most uninitiated can follow the plot, as it covers all the major events, excising some character development and ignoring some of the ancillary characters from the full series. The cutscenes themselves are fully animated, using the games engine to show major events. Yes, some story elements are shown later via flashbacks, but the game does a better job of showing rather than just telling, something the Musou series does to cut corners.

For the massive, massive amount of things that this game does well, there are some glaring issues that need to be brought up. The controls are absolutely praiseworthy, but he camera loves to wig out. When a targeted titan is near a wall or building, the camera can be found to spin and get completely lost. This means that there are times when the player cannot rely on the visuals to time a strike well, and must instead focus on rhythm. This works often enough in these situations, except when the enemy decides to shift or move. If that happens, all bets are off. There are also times when a fallen foe will clip through a building, rendering them invincible. This is especially frustrating as the buildings can be destroyed by titans. The structures should fall apart when they fall on them. 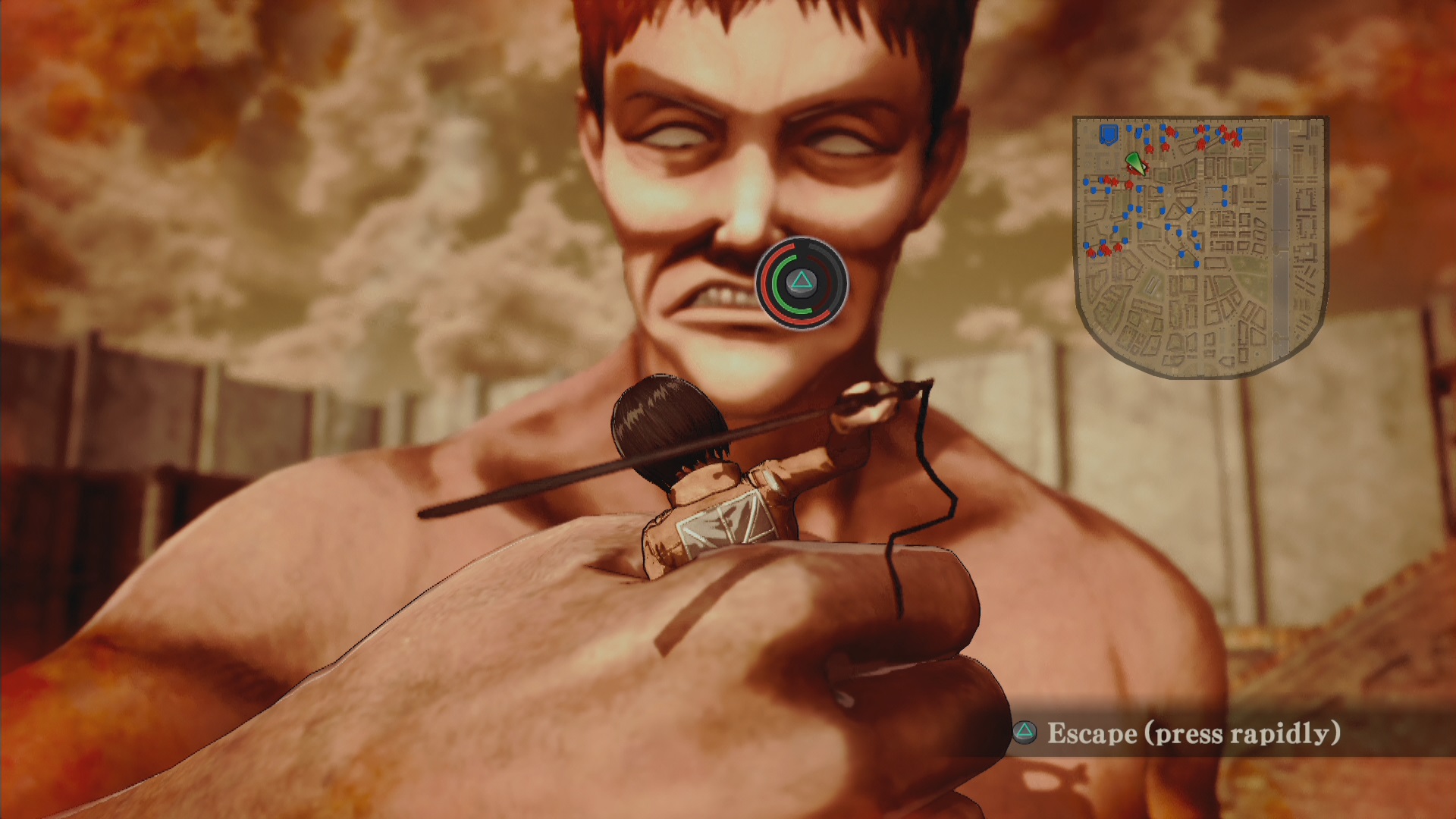 There is the matter of limited number of maps available. Those familiar with the series will understand that many of the battles take place in the same areas, but it would have been nice if the city interiors could have been spread out, and focus the battles into specific places. As it is, it feels like a world shaking moment when the player gets to venture outside of the walls as part of the Scout Regiment.

The hyped sequences where the player takes control of a titan are a bit underwhelming, as well. It is initially amusing to nonchalantly kick a smaller titan though a building, but these sequences are short and feel a smidge sloppy in control. They aren’t bad, and do provide an interlude to break up the gameplay, but it wasn’t quite where it could have been. One expects a feeling of weight, which is there, but one to one, skillful control of the monstrosity is not a true possibility. 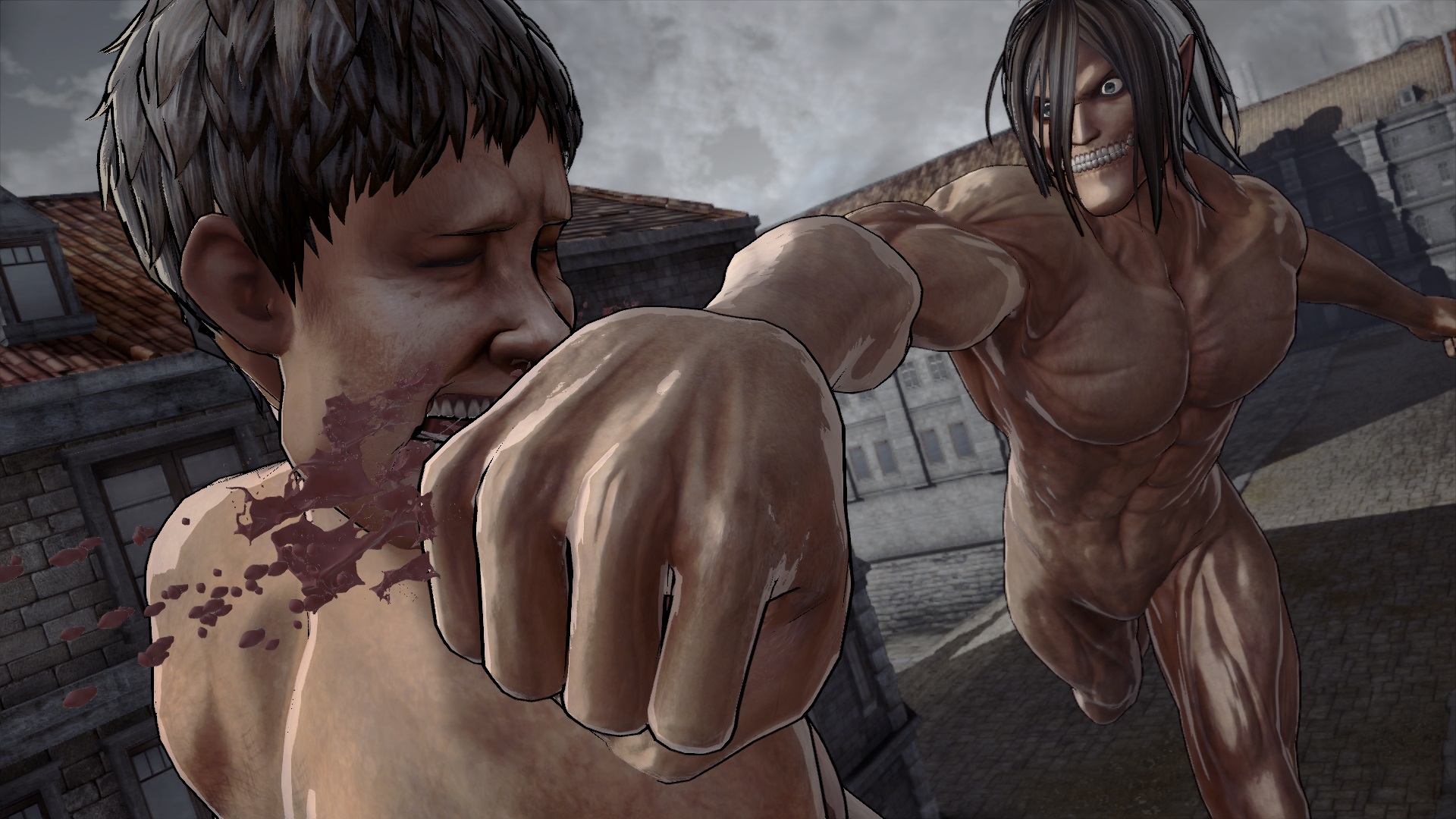 While not without its issues, Omega Force did a really good job bringing Attack on Titan into the realm of gaming. The studio managed to catch the look and feel of the series and inject the gameplay with a really unique hook. Technical issues do grin menacingly from over the wall, but they pale in comparison to the feel of swinging above a building, boosting over a street, and zipping in to hit a large titan’s neck, zipping to another immediately after, severing a limb. The feel of play combines with a retelling of one of the best current anime makes Attack on Titan a treat. A fellow writer commented that I would be all over naked dudes when I took this assignment. And I am. I am so all over these naked dudes.