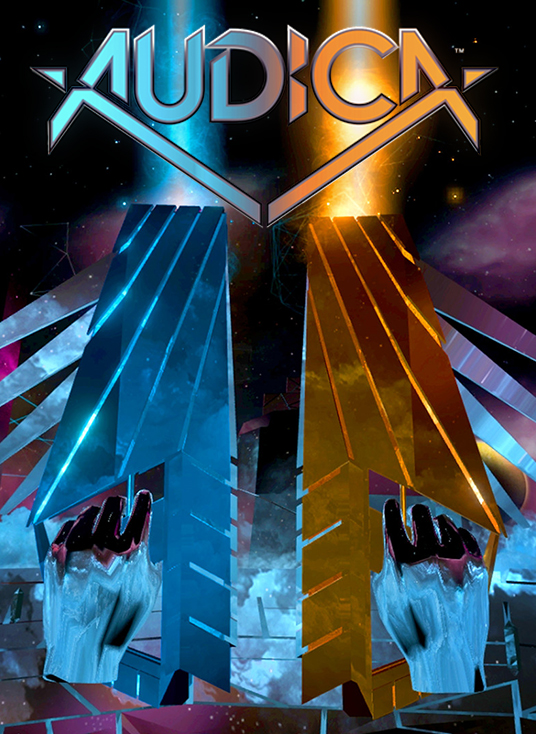 There’s a simple secret to music games and it’s that, if an action is any fun at all, it will be even moreso when performed to a beat.  Tap the right spot on a touch screen, strum or beat on a plastic instrument, swing pretend-sabers or even empty hands, or in the case of Audica, shoot the notes out of the sky; the simple actions become much more entertaining when done to music.  The ultra-early days of VR were littered with shooting galleries, some good and others less so, and the near-death of the light-gun shooter was quickly reversed thanks to how well it worked in a headset.  Audica turns the shooting gallery into a musical performance space, where the notes fly into view so you can blast them perfectly to the rhythm, shattering the discs into a cloud of swirling particles.  Targets pop up from every angle, fully telegraphed so even the ones not in line of sight let you know where to look, and if you can just stay on top of the note order and aim true, then the glory of a high score awaits.

Like most music games, Audica is a fairly straightforward arcade experience.  There’s a list of songs with multiple courses of difficulty, a nice selection of game modes and a generous number of settings to tweak the experience to your liking.  The main modes are Solo Play, which is the list of songs fully open from the start, Group Play for those with friends, Campaign, which divides the track list into five chapters and unlocks a new gun and backdrop on the completion of each one, and Tutorial for learning the ropes.  A quick trip into Settings to turn the particles on to max plus drop the overly-generous auto-aim down to at least 50% and it’s time to shoot some music.

The standard song structure is that a series of targets, blue for the left hand gun and orange for right, fly toward the screen with multiple indicators to show precisely when it’s time to shoot.  The clearest indicator is the beat of the song, but there’s also a ring that shrinks as the target draws closer, fitting perfectly around it when it’s time to fire.  The ring and a swirly glow also do a nice job of bringing attention to a target outside of the direct line of view, helping you home in instantly instead of being caught by surprise.  On the Standard difficulty there are also diamond-shaped notes to indicate a hold, with an arc of electricity locked on the target for as long as it lasts while moving the gun about has a subtle effect on the audio.  The other type of diamond-shaped target has a trail of smaller diamonds leading away from it, and while you can just keep the trigger held while the shots fly to the little beats automatically, following along will give a much nicer score.  The last Standard-difficulty target is a small disco ball that flies straight towards you, and rather than shooting it you use the gun to smack it out of the air.  Finally, once you’ve graduated to Advanced or the lightning-fast barrage of Expert, a new type of target appears, a spiked oval that lets you know whether to hold the gun horizontally or vertically. 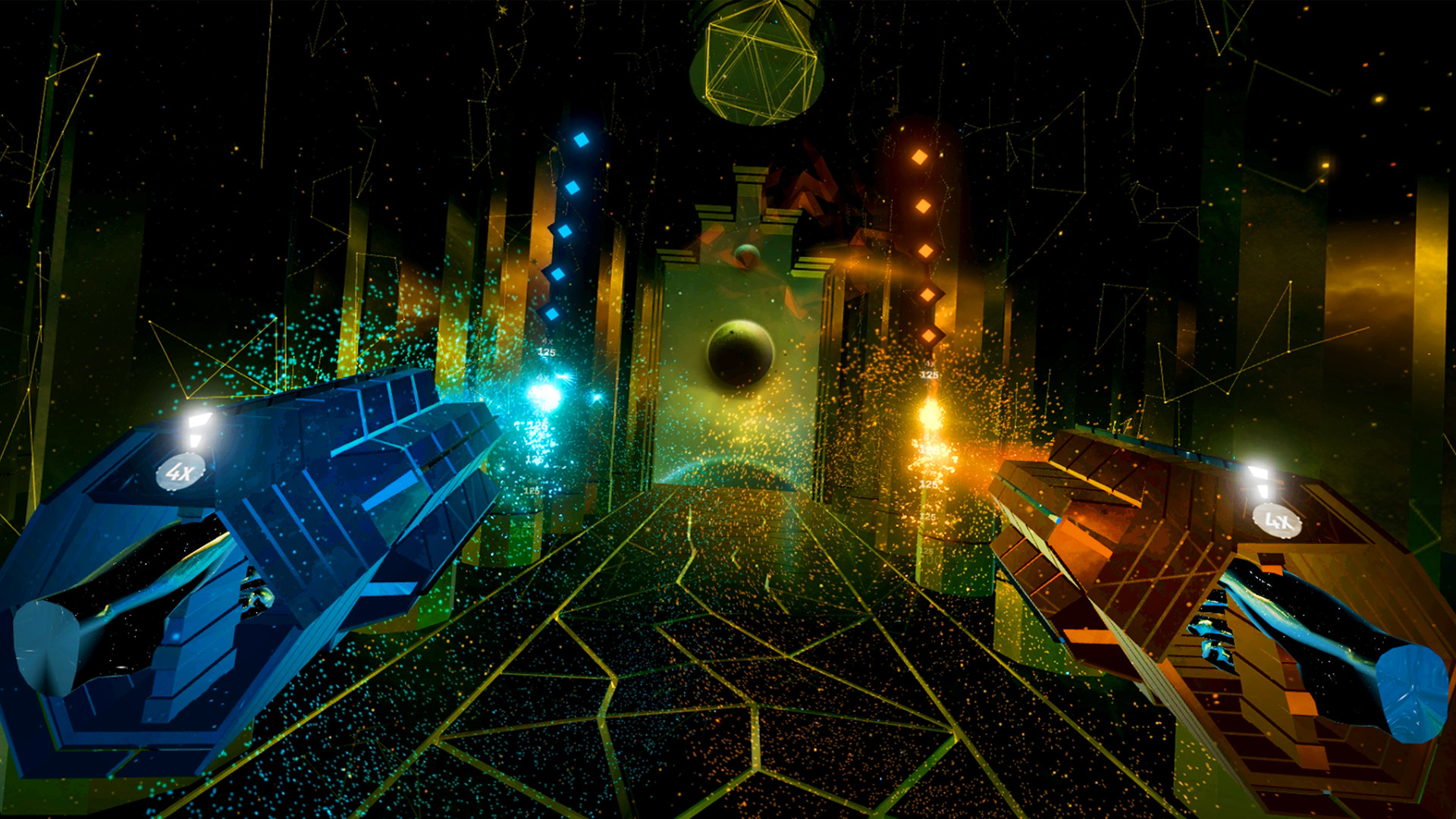 Like any good music game, what makes it work isn’t so much the number of note types but rather how they’re arranged, and Harmonix has years of experience creating note tracks.  Music is built with repetition in its melodies and choruses, each song mostly unique, and the note track designs follow suit. Playing a song for the first time, especially one you haven’t heard before, becomes a matter of quickly figuring out its rhythms and seeing how the targets fit into the beat, shooting (for example) left left right-hold, left right sphere-smack, then repeating a few times until the rhythm changes.  It feels a bit more musical than that, of course, and the targets are rarely so polite as to just show up front and center.  Every song has its own unique feel and a note track to go with it, although the full personality of each doesn’t come out until playing on Advanced.

Standard difficulty is fairly accessible and it shouldn’t be too hard to five-star each song, if not on the first play through then after a round or two of practice.  I blew through the entirety of Campaign with minimal fuss, even on the songs with modifiers such as Invisible Guns or Extra Particles (not sure how that second one is supposed to be a challenge; you can never have too many particles). Advanced takes a good amount of practice, with the targets flying in numbers that can make it hard to read the right order, but it all makes sense after a few rounds.  When it all comes together Audica turns into a musical light show conducted with guns, targets flying apart in a shower of orange and blue particles that light up the sky to the rhythms of the music.  At its absolute best (Dragon Force’s Highway to Oblivion) Audica is a joyful expression of musical firepower, and even on the songs that may not quite do it for you musically, it’s worth a play or two just for the fun of blasting through the patterns. 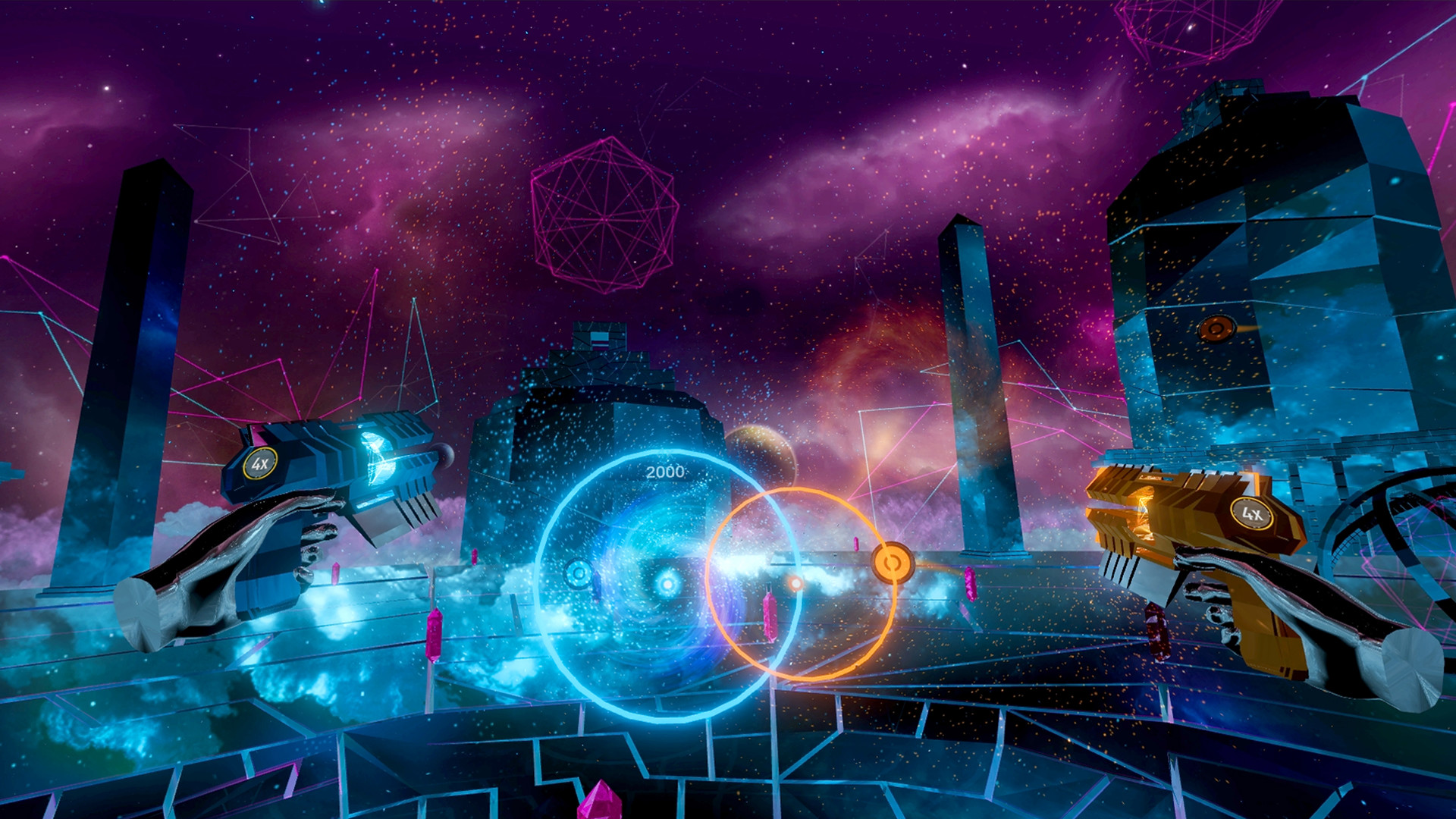 Audica is a fantastic rhythm-shooter but it does come with a small disclaimer.  Playing it at its best took a certain amount of tweaking, adjusting various options until the game felt right.  Thankfully those options are all waiting in the Settings screen and difficulty selection, but playing it vanilla/Standard felt kind of bland.  Once corrected, though, Audica transformed into an incredibly fun and nicely challenging musical target range, where each new stretch of song brought a note pattern that lit up the sky with the pyrotechnics of its destruction.  It’s an arcade light show set to an energetic soundtrack with note patterns that stream in from all around, keeping you constantly on your toes as the music comes to life through firepower.