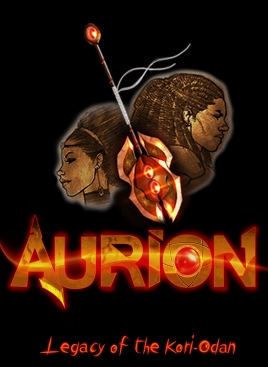 Aurion: Legacy of the Kori-Odan

Children, gather round, as it’s story time. Once upon a time, in the long ago, far distant past of 2014, there was a video game called Never Alone. It was an ambitious title that would not only serve as a video game, but also as a means of passing down mythology, tales, and folklore to a new generation (Inuit lore, in this case). It was going to use the medium in an innovative new way to tell these stories by placing the player right in the heart of them. It was destined for glory, but while it was still mostly well-received when it came out, several critics still felt that the overall quality of the gameplay took a backseat to the emphasis of showcasing the lore and so Never Alone never truly achieved the level of greatness it could have had.

Fast-forward to today, where Cameroon-based developer Kiro’o Games has taken a similar approach with their new action RPG, Aurion: Legacy of the Kori-Odan. Drawing from African mythology and lore, Aurion sets out to deliver a unique taste of African culture to the world and the end result compared to Never Alone is…well, you know the old saying: Those who don’t learn from history are doomed to repeat it.

That’s not saying Aurion: Legacy of the Kori-Odan is bad, mind you, far from it. It’s just that it feels like for every major step it takes towards creating a quality game that does Africa proud, it makes a minor mistake as well. But let’s start from the beginning: Aurion is the story of Enzo, the king-to-be of the continent of Zama. On the day of his wedding to his bride Erine, his brother-in-law stages a coup, and Enzo finds himself having left his land. Now he must team up with Erine in order to undertake a journey of self-discovery, unlock his Aurions (energies and fighting abilities channeled from ancestors), and gather his legacy before making his way back to Zama. 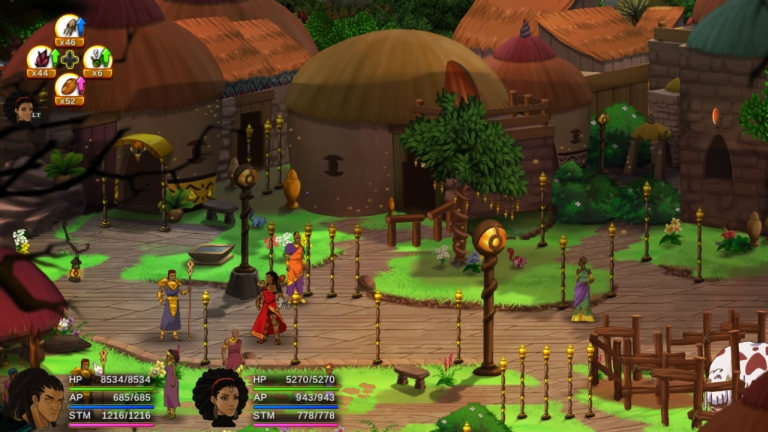 The story is definitely interesting, especially with its emphases on the relationship between Enzo and Erine, along with Enzo experiencing other lands outside of Zama and learning how they all operate, and discovering what it means to be a ruler from each one. The downside is that this tends to require more than a few exposition dumps, typically accompanied by a heavy use of diagrams. We can all appreciate good world-building, and the world here is captivating indeed, but Aurion tends to feel a tad aggressive in explaining things at times. The effort spent into laying everything out probably could have been spent on a better proofreader as well, as there are definitely a lot of typos plaguing the dialogue as well.

Thankfully, Aurion also lets its worlds and cultures shine through via the graphics as well. If there’s one thing about this game that you can hear everyone raving about, it’s how the art style is a breath of fresh air. Indeed it is, with color and vibrant tones flowing throughout every area, every background perfectly channeling the feel of Africa, simple yet effective character portraits and models, and a perfect dose of traditional music accompanying it all. It’s a shame that the game has some notable scaling issues concerning its sprites that get a tad disrupting, resulting in the occasional bit of graininess surrounding a character. Also, creating several lush, open backgrounds and then locking them off with invisible walls is a tad annoying.

Despite that, exploration is also well-executed as well, with large maps alternating between 2 and 2.5-D movement. You roam about each area finding what you need to advance forward, hunting for caloos (the game’s equivalent of treasure chests) along the way, defeating enemies (although you can thankfully opt to simply avoid them), and solving occasional puzzles. The problem comes when having to engage in any platforming segments, which always feel iffy. 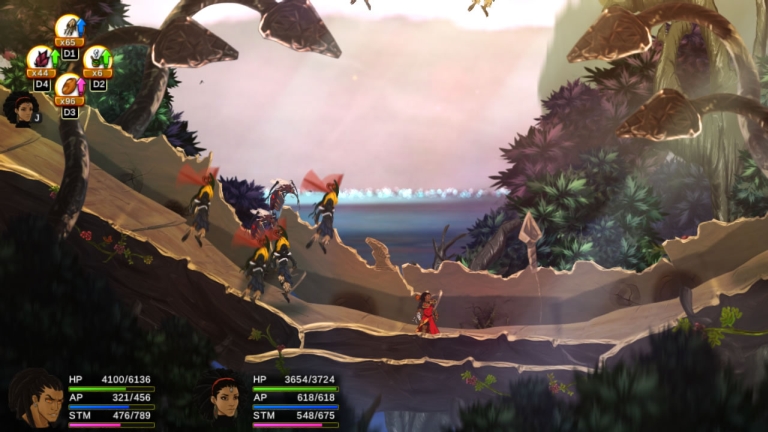 There were several moments where things just didn’t seem to connect when trying to jump to an above platform, and Enzo just passed right through it without connecting, not to mention more than a few additional moments where leaps of faith have to made into areas you can’t see ahead of you. And do not get me started on some of the most aggravating wall-jumping in video games, which over-complicates things with additional controls and forces you to constantly down bread to restore your rapidly-depleting stamina. And having the edges of your screen flash a certain color to let you know whether your health, AP, or stamina needs refilling is useful in battle, it gets annoying when it keeps on flashing until you refill things, even when you’re just peacefully walking around a village.

But the true meat of Aurion, however, lies in its combat. The second you engage with an enemy, things switch over to a 2D fighting game, somewhat akin to Smash Bros. Here, Enzo can tap into his various Aurions that you can switch between, all of which have different appearances, moves, and elemental damage. Erine can also be summoned as an additional character to provide healing or assist in attacks, but at a potential cost of putting her at risk. You also have Aurionic Charges to restore the AP that special attacks use, the ability to actually to actually max out your AP even further at a cost, and special techniques allowing you to dodge enemy attacks and stun them, among many other things to learn. It is quite deep, and there’s a level of strategy in having to be able to balance everything perfectly while paying attention to the multiple enemies around you, not to mention making sure that you don’t run out of AP and having your Aurion disconnected. Plus there’s just the fact that jumping and dashing around, evading projectiles and striking opponents while racking up high Arkham-style combos is highly enjoyable, and controls like a dream with special moves being easy to pull off. Indeed, the game’s combat is just immensely fun overall.

And I wanted to engage in as little of it as possible. 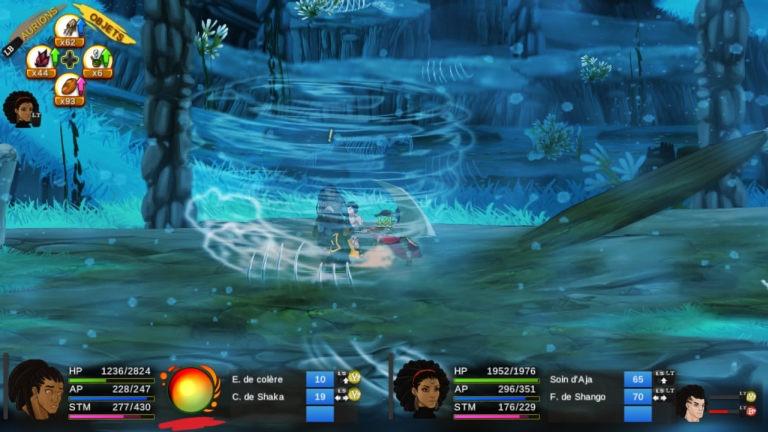 That may sound odd, yes. But the combat in Aurion is like a delicious gelatin dessert. It tastes great in regular servings, but when you’re forced to eat nothing but gelatin for hours, it becomes easy to get tired and/or sick of it quickly. The prolonged sections where combat is the main draw get repetitive a bit quickly, to be honest. There isn’t exactly a whole lot of variety in basic enemy types in each section, and whenever you are sent into one with multiple foes, they end up instantly spamming their attacks over and over, sometimes even hitting you before the brawl properly begins. It begins to feel more like a chore when you battle so many enemies over the course of a twenty-minute section, encountering the same groups of goons and using the same techniques again and again. Part of the the problem is that regular attacks tend to a piddly amount of damage, and this is especially true against the bosses. There, it feels like all you do is whack opponents with special attacks to build up your “ultimate” attack meter, dodge, retreat to perform an Aurionic charge to restore AP, and repeat over and over until you can launch an aforementioned ultimate attack that actually deals significant damage.

Thinking about it, the length of the battles is part of the issue there. Let’s just say there’s a reason why your average one-on-one fighting game match only lasts about a few minutes at best: The longer it goes on for, the more it runs the danger of becoming tiring. And sadly, that’s the case here at times. 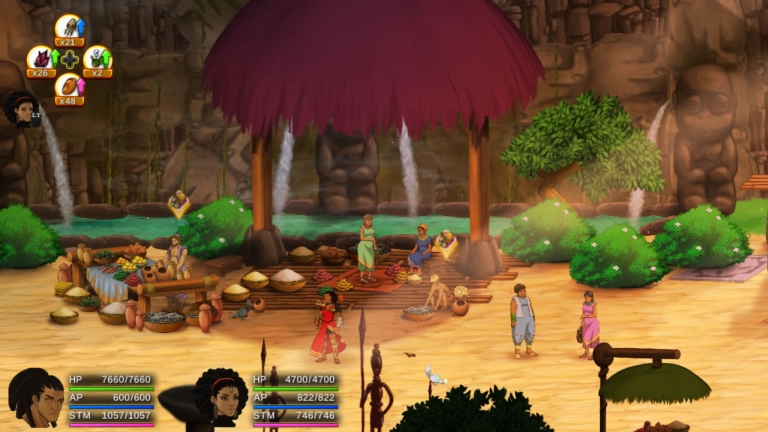 While it does sound like Aurion: Legacy of the Kori-Odan has a lot of negative aspects to it, it is still a very good game overall in the end. It’s just that you have to endure several little to mid-sized niggles along the way. The end result is an African tale that should at least be commended for it’s ambition and desire to share such traditional fables with the rest of the world, along with its superb style and combat mechanics, but that also could have used more polish in delivering said fables while intertwining them with solid gameplay. So while I look forward to other world cultures using games as a means of passing down legacies and stories, let Aurion double as a cautionary tale in addition to a decent action RPG.