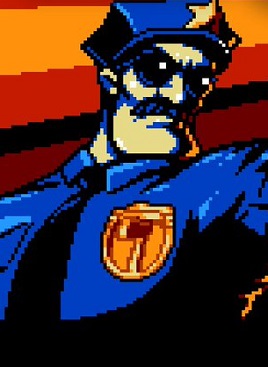 There are some concepts that sound unappetizing at the start. Noodles made from the blood of endangered species, for example. This might be why there have been some hold outs in the Axe Cop phenomenon. Reading something written by a young child, as is the case here, just doesn’t sound like a good use of time for anybody outside of the immediate family circle, even if the art is done by the much older brother. Storytelling should require some amount of maturity, some deeper understanding of society or how different changes to the norm would affect the immediate situation and the world. A five year old like Malachai Nicolle simply wouldn’t have that, even if his older brother Ethan did a bang up job with the art. As such, I have had zero prior exposure to Axe Cop with the exception of previewing the game at PAX South earlier this year. This (admittedly snooty) attitude means that the story of Red Triangle Games’ labor of love was completely fresh to this reviewer and it can be confirmed that this title serves as a perfect entry point to the series.

The game puts the players in control of the eponymous Axe Cop and his revolving gang of friends, known as the “Good Guys.” The hero’s origin is simple: he went to a house fire and found the perfect fireman’s axe lying around and decided to take it. As this axe was obviously the property of one of the folks actually fighting the blaze, it’s odd that our protagonist began his career as a thief. Odder still is that there are acknowledgements of his enthusiastic use of his weapon to solve crime. Indeed, no criminal issue can’t be solved with a swing of a blade and the rolling of a head. As such, the Good Guys are on a separate police force from the average cops and aren’t looked upon too fondly.

That isn’t to say that the Good Guys are wanting for members. There’s a continuous series of hangers on joining and leaving the party, ranging from the erstwhile sidekick Flute Cop (in one of his many forms), vampire ninjas, talking dogs and so on. The overarching plot manages to be fun, in a silly way, and makes sense in context. The problem is in trying to describe it. Multiple drafts of this paragraph were done in an attempt to break down what the tale is all about, and each version sounded like the ramblings of a over-caffeinated child at best. Which it probably was. Even so, in the game it all clicks together in an innocently hyper-violent whole that this newcomer enjoyed quite a bit. 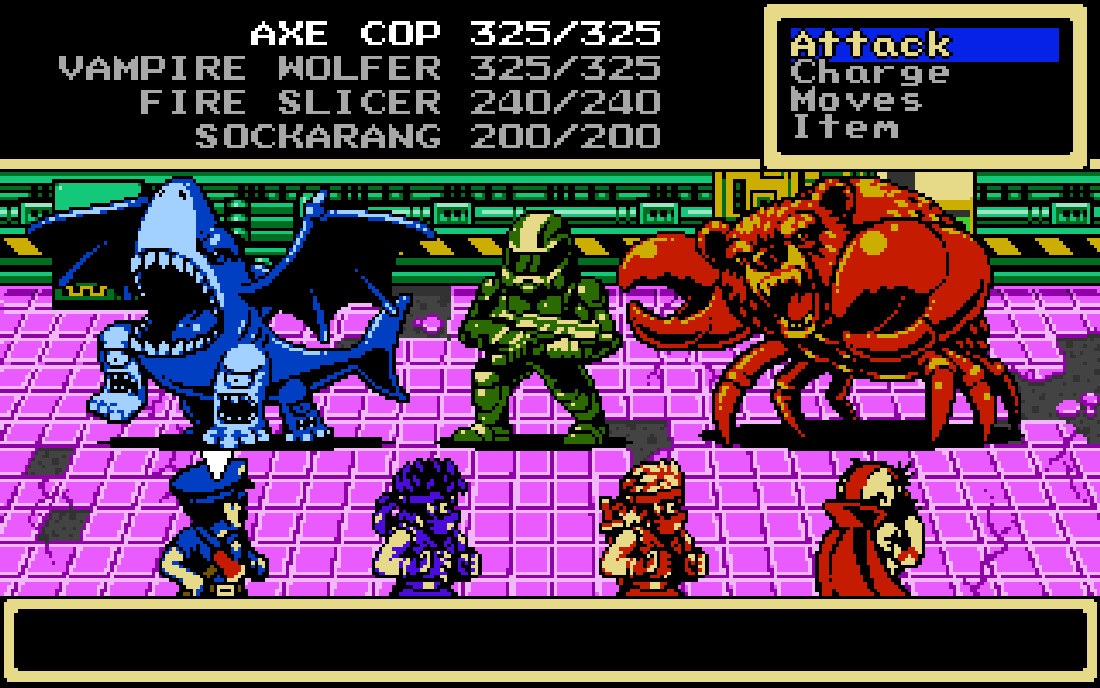 The game itself is modeled off of 8-bit style Japanese role-playing games. The battles are turn based, with the villains taking up a large portion of the screen, seeming as an homage to Dragon Warrior on the NES, even if the heroes can be seen at the bottom. Special moves take the place of spells. Otherwise, it’s straightforward.  One of the nicer features of the battle system comes in the form of the MP system. Specials take MP to use and the difficulty of the levels means that these are meant to be used quite a bit. MP can, fortunately, be recharged simply by using regular attacks, or taking a moment to select Charge, which sacrifices a couple of turns in favor of a larger replenishment of the dwindling resource. So, battles are a matter of buffs and debuffs, sacrificing hit points strategically to put a dangerous foe to rest. Those hit points do fold into a larger picture, as there are too few healing spells to go around and no “Rest” system to fill up at save points. This, coupled with the paltry amount of healing that Sodas (this game’s version of healing potions) impart means that every these decisions matter. Axe Cop is not the most challenging JRPG to come along, but it does require that the player think about what they are going to do, what singular stat can be improved with a level up and how they will tackle one of the sprawling levels.

While this precisely-balanced difficulty is welcome, it could get monotonous over time. Axe Cop puts real effort into avoiding this with a slew of minigames. Side-scrolling shooters, snowboarding down the side of a mountain and block-dropping puzzle games to override a generator are just a few of the many pace-changing diversions to pop up during the games’ generous run time. Whenever it feels like it’s time to take a break, something fresh happens, pulling the player back in. They aren’t all bangers (the stealth instances were more slow paced than tense), but the variety helps push this game along. 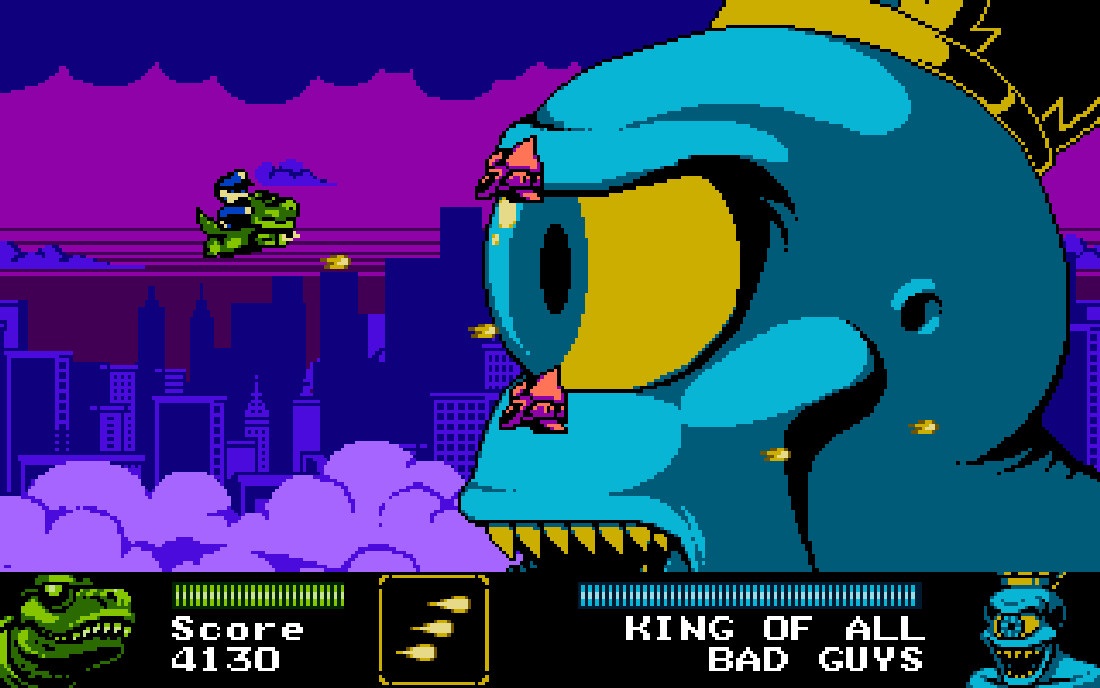 There are flaws in the quest to kill all of the baddies, though. Each of the heroes has a special skill that’s needed in the overworld to solve a puzzle or clear a path. For the longest time, I was laboriously going into the menu to switch out the leader, which was annoying. It was much later that I learned of a quick swap feature that would have saved annoyance. It’s great that they thought of this, but it should have been surfaced better. Similarly, when trying to do a move near a context sensitive object, the game stops and asks if the player wants to switch each time. It’s not a major gripe, but one wonders what else the player would have wanted and why the question is posed in the first place.

The one major aggravating point comes in the lack of a map system. The levels get large and require backtracking. While room designs are unique, they typically make use of the same tile sets. Because of this, there are times where the player has to wander around to figure out the next stop on the path to kill the baddies and save the entire planet. If there’s a map system in place, it was never found during playtime, even after active searching, which led to periods of frustration and fighting the same (humorously-designed) enemies over and over. While this should have been a time to grab graph paper and draw it out old school, the lack of a map does hamper the experience overall. 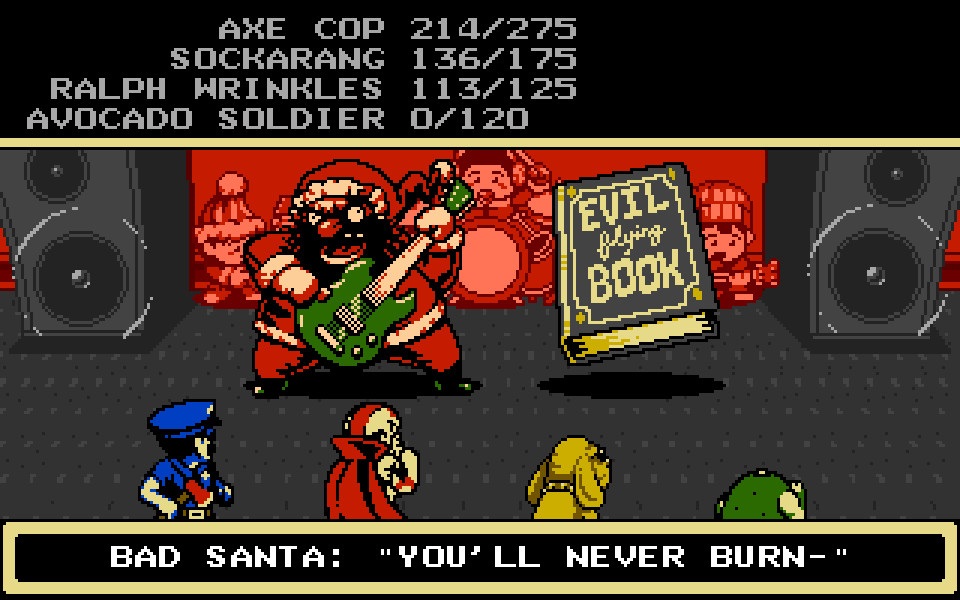 Despite a couple of gripes, it cannot be denied that Axe Cop succeeds at creating a fun, retro-inspired RPG. Red Triangle Games put their all in embracing the past while keeping the gameplay fresh and exciting, and the work shows. This is a game that fans of the comic or show will very much enjoy, but preexisting knowledge of the world the Nicolle brothers created isn’t a prerequisite. The story beats are told in a way that makes sense, even when they shouldn’t, leading to something that allows players of all types to dive in and get their leveling up on. Personally, I was expecting to write this off as something “just for the fans.” In practice, Axe Cop the game is poised to create a whole slew of new fans.