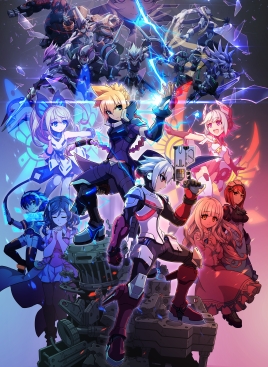 The original Azure Striker Gunvolt was an outstanding action-platformer from IntiCreates that didn’t just evoke things that made Mega Man great, but was its own thing. The use of electricity to get around the world and kill enemies stood out instantly and its high level of polish allowed it to stand out to a lot of games on eShop. Now, its sequel is available and continues that trend. Azure Striker Gunvolt 2 brings Gunvolt and Joule back together — while adding a second playable character to the mix. Copen joins the fray as a bit of a rival to Gunvolt, but gives players that much more variety for the core game.

Gunvolt alone gains new powers from his longtime ally Joule, and can now do things like dash across the ground or fly overhead using her wings.You can also now double-tap down to recharge his lightning blast — which changes the whole flow of combat. Before, you would have to wait around for it recharge and while it didn’t lead to life or death situations, it still ate up time. This new system keeps the game’s pace brisk, and that holds even more true with Copen. Copen can’t stand Gunvolt, but offers up an even faster-playing experience.

Copen uses a long-range laser blast instead of a traditional blaster, and darts around the screen with a faster dash. He can also double-jump walls and small areas by holding up and L — giving you a new way to save yourself from death. He is a speedrunner’s dream because everything about him is built to do fast damage and/or move you along the stage quickly. Even for someone who isn’t into speedrunning, just playing as him made me want to go faster and be as efficient as possible. Getting A grades always felt good, and it nets you more bonus chances after the stage — making your path through the adventure a bit easier or harder depending on what kind of items you choose to craft. 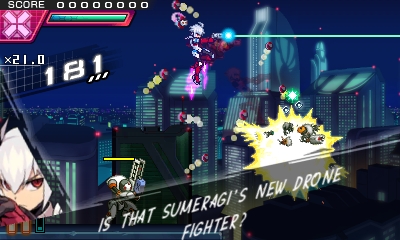 The original game was known for being incredibly tough — but fair. Every stage was there to challenge you, and victory felt rewarding. Now, the difficulty has definitely been toned down and it’s usually for the better. Those seeking a harder game can just adjust some settings or craft handicaps to add challenge, while those seeking something they can pick up and play can do that as well. Lives are unlimited and checkpoints are plentiful. Death is only a time penalty now since you have to wait for the stage to reload, and you can just resume fairly close to where you left off.

Each character has their own storyline, but neither is all that compelling. Copen comes off as angry at the world, while Gunvolt goes from a radical to someone in the middle of every female’s affection. I guess he’s now Moe Man or something. Fortunately, the storyline for an action-platformer is never all that essential to have a good time – and this one using Group X vs. Group Y does evoke a bit of what made the Mega Man Zero lore so engrossing. It’s a shame that the combat here, much like in Mighty No. 9, is so frequently interrupted by dialogue. At least here, the text boxes are large and easy to read while also being somewhat translucent so you can see through them. Mega Man Zero threw these in too, but it was far less obtrusive.

Controlling either Gunvolt or Copen is a breeze, and Inti Creates can always be counted on in that regard. Each character shares enough traits that going from one to the other isn’t jarring, and having a seamless transition is important to making the game feel cohesive. The button layout is logical, although playing for extended sessions on a non-XL 3DS console can make your hands sore. You need to use the shoulder buttons a lot here and those can be tricky to reach easily if you have big hands. Fortunately, the d-pad remains perfect for movement and the face buttons are easy to hit right when you need to. 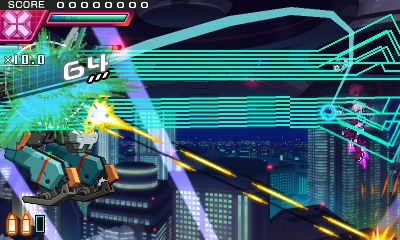 Azure Striker Gunvolt 2 doesn’t make any radical changes to the graphics — which is fine on one level because they were outstanding before. Despite not really making use of the full power of the 3DS, the game still delivered excellent sprite art and that trend continues here. There’s a lot of detail in the characters, their attacks, their special attacks, the enemies, and the many in-game environments. No matter how much craziness is on-screen at once, there’s never any slowdown and that ensures that you can enjoy staring at the game in awe if you so desire. Most of the time, you’ll just be trying to stay alive though. The game’s storyline-related anime artwork is gorgeous and really does stand out with an even higher level of detail than the original.

Musically, Gunvolt 2 continues the same genre-blending as the original. You get a mix of fast-paced chiptunes and anime opening-infused rock throughout the adventure. The Japanese voice acting seems fairly good in the sense that scenes that should be played up as intense are, and nothing seems hammy. The sound design on the whole is impressive, and something that truly shines with a solid set of headphones on. In playing with Status Audio HD Twos, the music that comes across as a bit tinny on the default speakers is suddenly booming — and that holds true with the sound effects as well. The usual “pew pew” effects for the blaster, and more-rewarding lightning blasts sound far better with headphones on — but are serviceable with the basic speakers on the device. 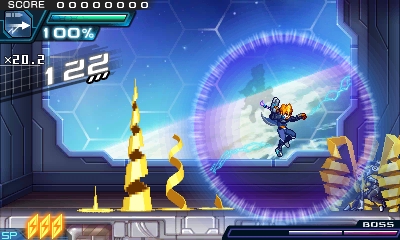 Azure Striker Gunvolt 2 doesn’t radically change the formula of the first game beyond adding a new character. Fortunately, Copen plays slightly differently and does offer up a fresher experience. Anyone who loved the original game will find a lot to enjoy here, although the decreased default difficulty may annoy some who loved being thoroughly challenged by the first. Newcomers to the series who enjoyed Mega Man X-style games in the past will be right at home. The physical version with both Gunvolt games is a fantastic starting point for newbies, while those with the first game should snag this on the eShop as soon as possible.