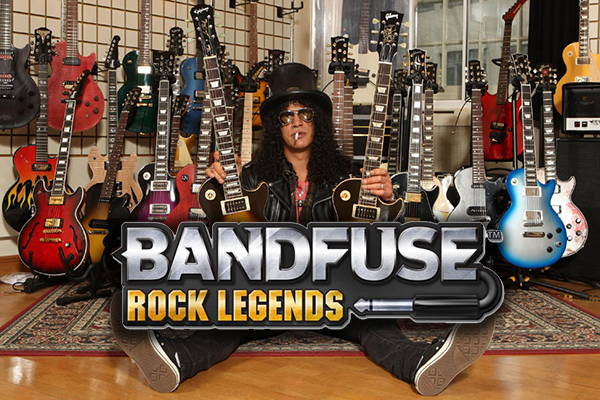 I’m not a rock star. I’ve never performed a stage-dive into a crowd of wasted teenagers, drunkenly assaulted a groupie, trashed a 5 star hotel room or had sex with Courtney Love — which happens to be one of many rock star rights of passage. I’ve never even touched a single gram of that sweet, sweet China White, and I only use ketamine at my veterinary practice. Honestly, I get my haircuts at Smart Style and have scheduled spaghetti dinners — not exactly things Pete Doherty would be doing. However, my timid nature has never stopped me from dreaming of the rock star life, and if there’s one thing BandFuse: Rock Legends excels at, it’s making you feel like a rock star. Even if it’s only until someone walks in on your poor performance of Coldplay’s Yellow and your inflated ego instantly goes down like the Hindenburg.

Once you’ve tied your Willie Nelson bandana and dusted that cocaine mustache, the first thing you’ll want to do is pick your poison. The choices are guitar, bass and vocals, with the option of coupling vocals and guitar for that true frontman experience. Unfortunately, I was forced to go for the guitar only option thanks to some pesky neighborhood noise ordinances established shortly after my Rocksmith 2014 review. The system is very plug-and-play, and the provided cable is nothing short of marvelous. Realta has miraculously managed to reduce latency to zilch — something you simply won’t find in most real-instrument games. Every sound produced is as clear as it is authentic, with professional-sounding amp and pedal effects. Notes register beautifully, and I was constantly surprised by the accuracy and responsiveness of the guitar, making playing through a song difficult for only the right reasons. 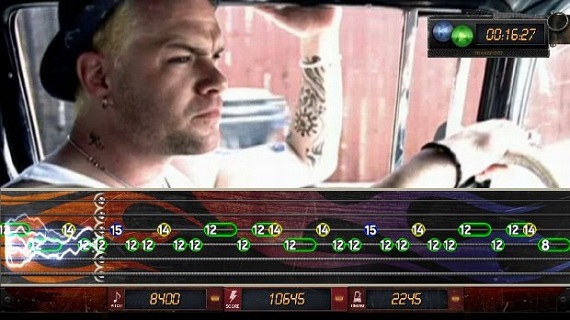 What really sets BandFuse: Rock Legends apart from other real-instrument games is that it truly feels like an evolution of the rhythm game genre. Much like in the plastic-bearing guitar games of the past, the gameplay interface provides a mostly familiar note-highway, and you’re ultimate goal is to follow the song as closely as possible with color-coded tabs dictating hand positioning and what notes you should be playing. It’s a comfortable and engaging structure that helps familiarize Guitar Hero veterans with its skill-building gameplay, and provides an agreeable starting point for rhythm game newbies with its animated tablature.

As its name would suggest, BandFuse: Rock Legends comes packed with one of the most complete rock-n-roll tracklists in rhythm game history, featuring 55 songs fit for nearly every skill level. Every track is accompanied by a high-quality music video that, while not an immediately necessary addition, adds a nice flare to the background of jam sessions. With artists like Fallout Boy, My Chemical Romance, Blink 182, The Pixies and Santana — with the exception of cynical enthusiasts that browse the obscure depths of YouTube for experimental polka-metal-fusion tracks — there’s something for everyone to enjoy. Being as I’m the Groundskeeper Willie of rock musicians, I mostly found myself practicing with Coldplay’s Yellow, a track that, despite being rather simple, showed me why it’s important that games like BandFuse exist.

Possibly the most exciting feature in BandFuse is the ability to jam with up to four friends — assuming you have that many, and assuming they’re into rhythm games and own a guitar or bass. It’s the only real-instrument rhythm party-game on the market, and it does justice to that fact by being insanely fun. Sure, there will be a lot of equipment piled up in your living room and the neighbors might cross you off of the Christmas card recipient list, but look at the bright side: that cute girl down the hall might think that you’re in a real rock band and instantly become interested in you because life is like an 80’s teen comedy, isn’t it? 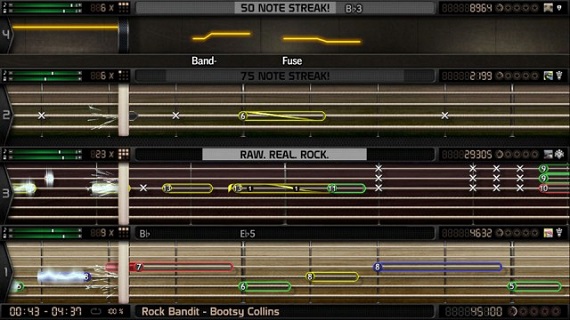 First and foremost, BandFuse is a video game, and no where is this more apparent than in Tour Mode. In what is essentially a virtual rock music career mode, players will start their climb to stardom by working small and seemingly insignificant gigs, eventually graduating to the heights of worldwide fame, performing high-paying concerts like true Rock Legends. However, since the Tour Mode system is entirely goal based, beginners will often find it tricky to advance, as achieving certain goals can prove difficult — such as playing a perfect track — but few actions in video games provide the satisfaction you get when you finally nail a song.

While the Tour Mode is initially unapproachable to beginners, the Shred U mode is there to provide some helpful learning tools for all player levels. The Skills Lab offers some easy-to-follow tutorials, including interactive skill-building techniques, while the Lick Lab allows you to dissect a song into several standalone sections, providing a simple practice space that lets you focus on particularly tough riffs. Most impressively, though, is the large cast of Rock Legends ready to guide you through BandFuse, including Slash (Guns N’ Roses), Jason Jook (Five Finger Death Punch) and Mike Ness (Social Distortion). It’s also possible to create songs from scratch using a set of backing tracks, with the option to record any session — an essential feature for those that enjoy either gloating or being humiliated in front of an audience. This is a fine alternative to participating in open-mic nights, which are usually riddled with drunk douche-bags destroying Journey songs, pretentious poetry readings about misguided political views and wannabe starlets shouting off-key Katy Perry lyrics.

Despite it’s wide assortment of learning tools, BandFuse: Rock Legends simply doesn’t convey the fundamentals as clearly as other recent real-instrument games. On higher difficulties it demands a level of perfection that would make Keith Richards cringe, while lower difficulty settings prove to be quite unbalanced throughout. Even the easiest difficulty simply offers a stripped-down version of the song chosen, implementing an unnecessary learning curve and essentially walling skill-progression. Fortunately, you’re not punished for poor performances, which encourages bettering yourself by practicing your favorite tunes. The scoring system caters to record-chasers, providing a complacent base for goal-setting, as well as a nice way to track improvement as you play through the tracklist. 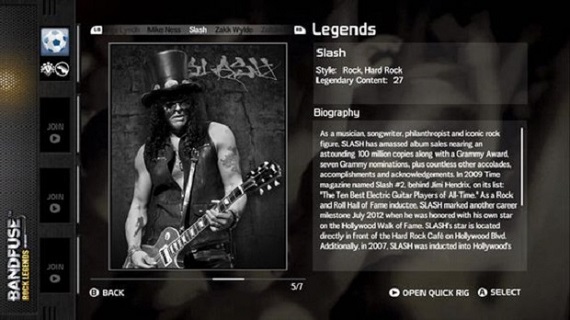 BandFuse: Rock Legends is the most technically impressive rhythm-game ever released. It’s a music enthusiasts dream come true, and the only discomforting hindrance I could account for is that I’m simply not seasoned enough as a guitarist to appreciate its pitch-perfect execution. It’s less of a learning tool, and more of a real-instrument rhythm game, but it comes packed with enough features for both beginners and experts, as well as a phenomenal tracklist. BandFuse combines function and fun to make you feel like a real rock star — hookers and cocaine withstanding — and manages to provide an overall engaging experience despite its difficulty curve. While I won’t be rising to fame, marrying a drug-riddled singer and shooting myself after confessing my new-found hatred for the music industry in a long suicide note anytime soon, I’ll be enjoying BandFuse for a long, long time.