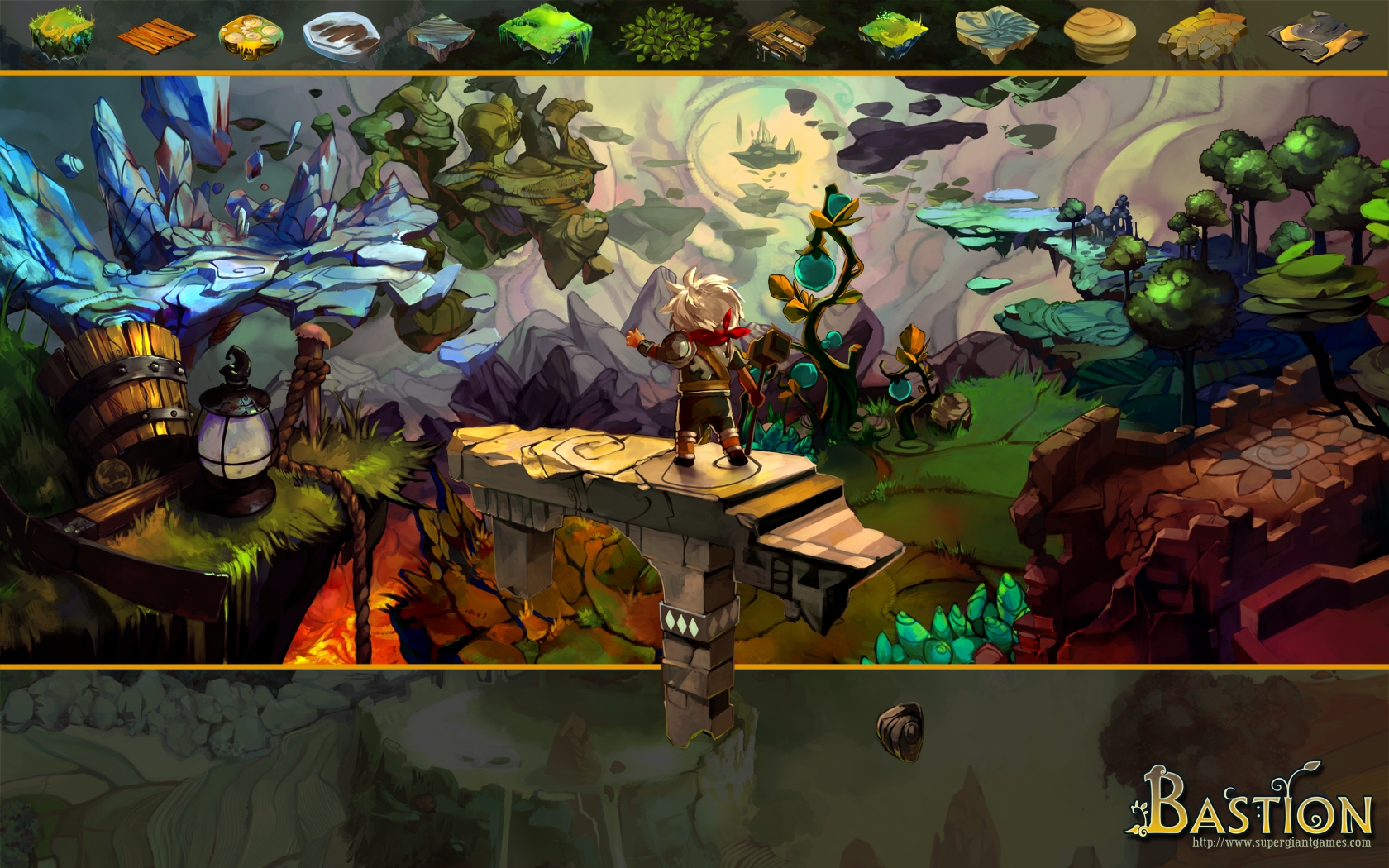 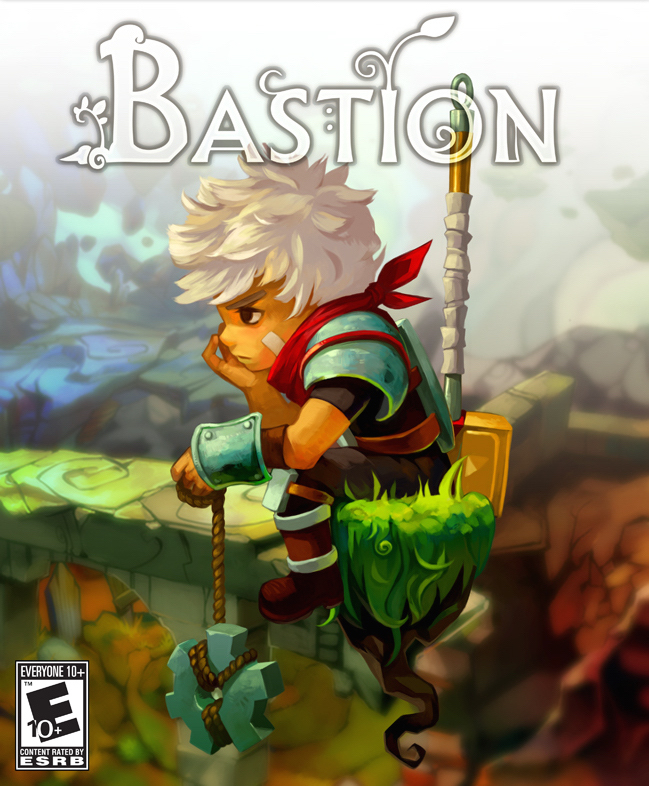 It’s been a while since Bastion took the world by storm for a hot minute there in 2011, right on the cusp of indie digital games rising to become the powerhouse they are now, but you wouldn’t know it playing today, even if you had never played it before. Bastion hasn’t aged a day. It’s one of the timeless games you could show your kid one day and it’d still look and sound and play just as well as it did the day you first downloaded it. But that’s not to say that it’s perfect.

Without question, Bastion‘s most defining characteristic is its narrator. He weaves through the entire game from start to end to pull everything together, explaining that you play as “the Kid” as he tries to piece back together the Bastion, a floating oasis in the sky, and round up any last survivors of “the Calamity,” a catastrophic event that killed almost everyone in the city of Caelodonia. Nearly every possible moment is punctuated by an eerily relevant line from the narrator as he tells the events of the game to “you.” We were given a giant hammer early on and started smashing random objects to get a feel for the combat, and the narrator kicked in to say, “The Kid spends some time just raging,” before we moved on. It’s a neat gimmick that allows for some extremely interesting storytelling later on as the game plays with some of your expectations of how things will go.

At the same time, the narrator is going to be a divisive factor for a lot of people who might want to just zone out and focus on the gameplay without little quips interjecting themselves into the experience every few minutes, or for people who just find the gruffer-than-thou gravelly voice too cheesy for them. Still, four years later, it remains a cool idea that separates Bastion from the chaff.

Bastion‘s distinctive, hand-painted look is its second-most defining characteristic and the reason it will never age. It will always look like art in motion, one of its most incredible strengths. Every screen of Bastion could be printed out and framed. It’s a look that is altogether vibrant, beautiful, smooth and immaculately detailed. Some of the details get lost in motion as you start to focus on the combat itself, but every once in a while, stop and take in the gorgeous sights. Each area is distinct, with swamps and tundras and forests and bazaars, and the imagination poured into each fantastical new environment is staggering. Art is subjective, though, so we could’ve done with just a little less “chibi” influence on some of the character designs and found the way the game blows itself out with a disgusting amount of overlaid light bloom and blurring occasionally. Yet still, quibbles aside, the game is stunningly detailed and consistently awesome to look at. 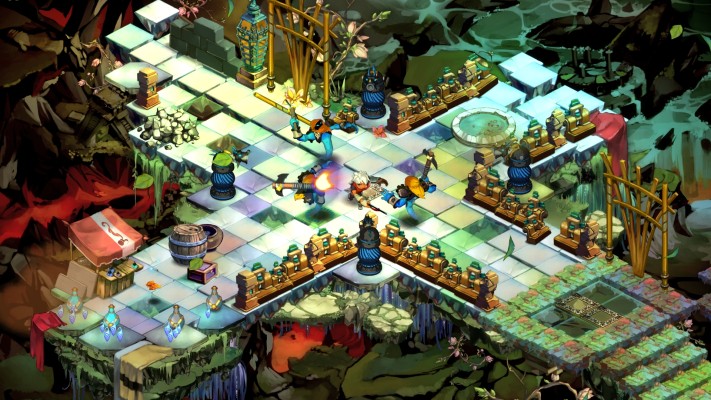 Third up is Bastion‘s fantastic soundtrack, a twangy, adventurous score that jumps through upbeat folk and menacing electronic vibes throughout to marvelous effect. Like the narrator, the soundtrack isn’t content to blend into the background to become yet another anonymous collection of ominous cinematic strings or yet another retro-obsessed set of chiptune boops and beeps. Here, the music adds rhythm to the action, pushing you along with cymbals, bongos, deep percussion, cellos and electric guitars. It adds flavor and color to the experience, something so many games miss the mark on completely unless they’re going for the “big-budget shooter” feel. Many tracks sound like something you’d hear in an old Western, but some sound more like they’ve been ripped from a dystopian future. If the narrator is its voice and the art is its eyes, then Bastion‘s soundtrack is unquestionably its soul.

And so finally we get to Bastion as a game, not as an art piece, and that’s where it is probably weakest. Playing from an overhead isometric angle, the small areas literally fill out as the Kid nears them, the ground rushing to meet his feet. It’s another cool gimmick, at least visually, but it doesn’t add much to the gameplay other than occasional frustration and restriction. There were a few times where we fell off the world accidentally and lost health while exploring simply because the ground rose up too close to our feet for us to guess that it would be suddenly turning or forming an extremely narrowed pathway that needed to be navigated carefully. You’ll get two weapons and a “secret skill” to fight enemies with, a shield to block attacks and a roll to dodge them completely. The often-narrow playing field limits mobility too much, though, reducing options in combat and favoring more conservative play styles: we had the best luck (and the least fun) blocking incoming attacks with the shield and then responding to them with the shotgun, over and over, without rolling or moving much at all. 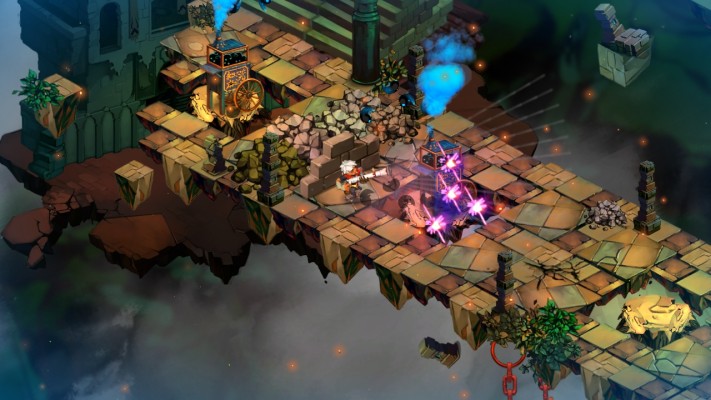 Maybe it’s because we’ve all been playing a little too much Bloodborne here lately at Hardcore Gamer, but Bastion‘s combat feels like a Souls game with missed potential, like it could’ve learned from how Demon’s Souls handled combat two years prior to its original release in 2011. There’s not much of a lock-on system, so the Kid will often be pointed at an unintended enemy and you also can’t freely roll around while still facing your target without losing what little lock-on there is. The right stick can be used to aim where the Kid is pointing, but given the reliance on the controller’s face buttons for melee attacks and that you (presumably) don’t have three thumbs, it’s not all that helpful. The controller’s buttons could probably be reassigned using the PlayStation 4’s new accessibility options to move all attacks and rolling to the shoulder button to allow free use of the right stick — a control scheme the game should’ve offered officially — but the default control scheme is counter-intuitive and often leaves you pointing at the wrong enemy. There’s a similar level of preciseness between Bastion and a Souls game, but the difference is that Bastion simply wants you to want to be precise, while a Souls game gives you the tools to be that precise then demands it of you. As a result, Bastion is far too easy, but simply giving enemies more health or faster movement with one of the game’s 10 various optional difficulty bonuses won’t solve that problem — a couple fundamental changes would need to be made to the combat system.

There’s a great variety of different weapons to choose from, like a giant hammer, a pair of machetes, a hunting bow, dual pistols and more. Any two can be selected a time and you’re not restricted to one melee weapon and one ranged weapon; you can have two melee weapons or two ranged weapons if you’d like, and we found using a combo of a close-range musket and a long-range rifle to be our favorite combo thus far. These weapons can be occasionally upgraded, and while you’re always offered two divergent choices for how you want the weapon to evolve, you can switch to the other choice at no penalty. There’s an additional skill to select and “spirits” that act as perks to let you have increased damage with low health, more health overall or a variety of other interesting choices. There’s so much experimentation that players can tinker with, and it’s fun to take combos of weapons and skills into the combat arenas that pit you against twenty waves of enemies. All the same, the way new weapons are forced on you in the middle of a story level can get annoying, especially because it can suddenly break your loadout if you chose a skill that requires you to have a specific weapon out and the game takes it from you. Sometimes, a weapon just doesn’t gel with you and you’ll be stuck using it for a while; there needs to be the ability to just swap weapons out at any time, not just at predetermined “armory” locations. 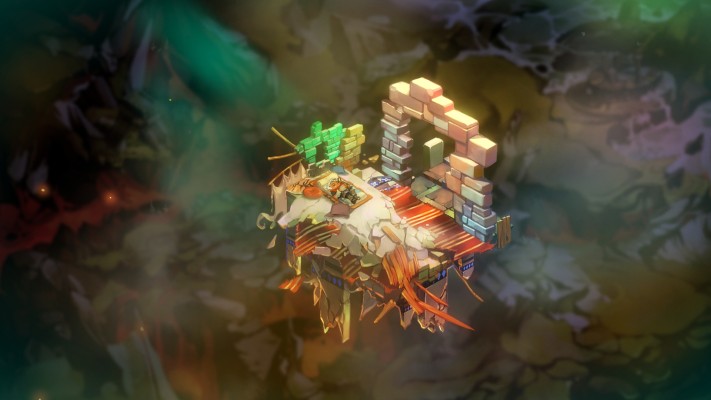 Bastion is an aesthetic dream, from the beautiful visuals that look like a painting come to life to the incredible soundtrack that breathes soul into that life. As a game, though, it could’ve been so much more. There’s a great amount of replay value here, from the new game plus mode to the combat challenges, but that’s only if the mechanics click with you enough to stick with it. Because of some frustrating controls and combat design decisions, Bastion is held back from being excellent, but remains great nonetheless.