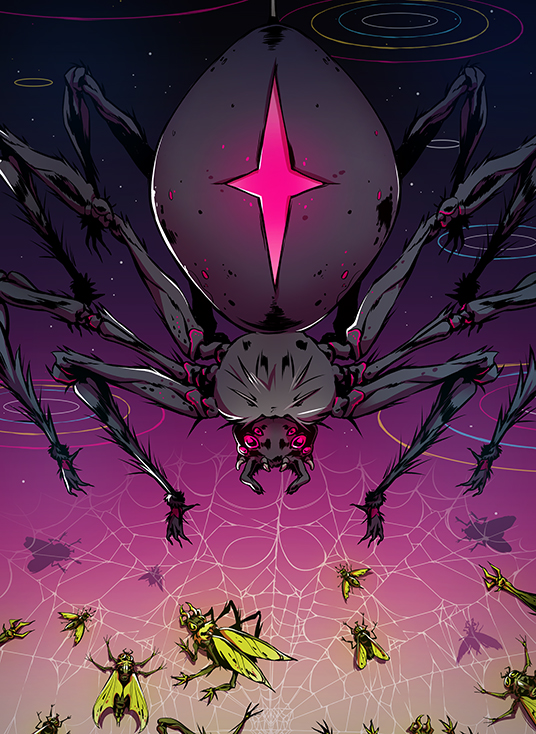 In the early days of the arcade scene it seemed like anything could get a greenlight. Run from house to house collecting parts to place on a blueprint and build a machine to shoot down all the enemies who’d been chasing you?  Build a bridge to a castle while avoiding Satan and his minions?  Shoot down planets that for some reason were swarming the screen rather than pirouetting endlessly in their orbits?  The arcade craze brought with it a thirst for content and it seemed like pretty much anything went, but even so it felt dark and edgy to be playing as a spider on its web.  Black Widow was one of the earliest twin-stick shooters, arriving at roughly the same time as Robotron, and while it’s impossible to compete with one of the greatest arcade games ever made, it was still a memorable blast of vector-graphics action.

The basic setup of Black Widow is that the player is a spider protecting its web, shooting down the flies, hornets, beetles and other bugs flying around while grabbing the $-sign bonuses (called grubsteaks for some unknown reason) they drop on death.  Survive, never stop shooting, keep the web as clear as possible and always be chasing that high score.  It was great action with a memorable theme, helped in no small part by the primary colors of its detailed vector graphics, but in terms of being fondly remembered it’s basically an arcade obscurity.  That doesn’t mean it’s not worth a new look, though, and Black Widow: Recharged gives the design a thorough once-over to deliver a worthy sequel.

As the second game in Atari’s latest group of classic releases, it’s overall setup is identical to Centipede: Recharged.  It uses the same semi-vector art style, single-life score-attack primary mode, multiple challenge levels as a secondary mode, and the same menus and scoreboard setup as Centipede: Recharged, but Black Widow: Recharged plays with the original game’s design more.  When the screen gets crowded with enemies, something as simple as not being able to walk over the hole in the center of the web can feel like a major, albeit logical, change. 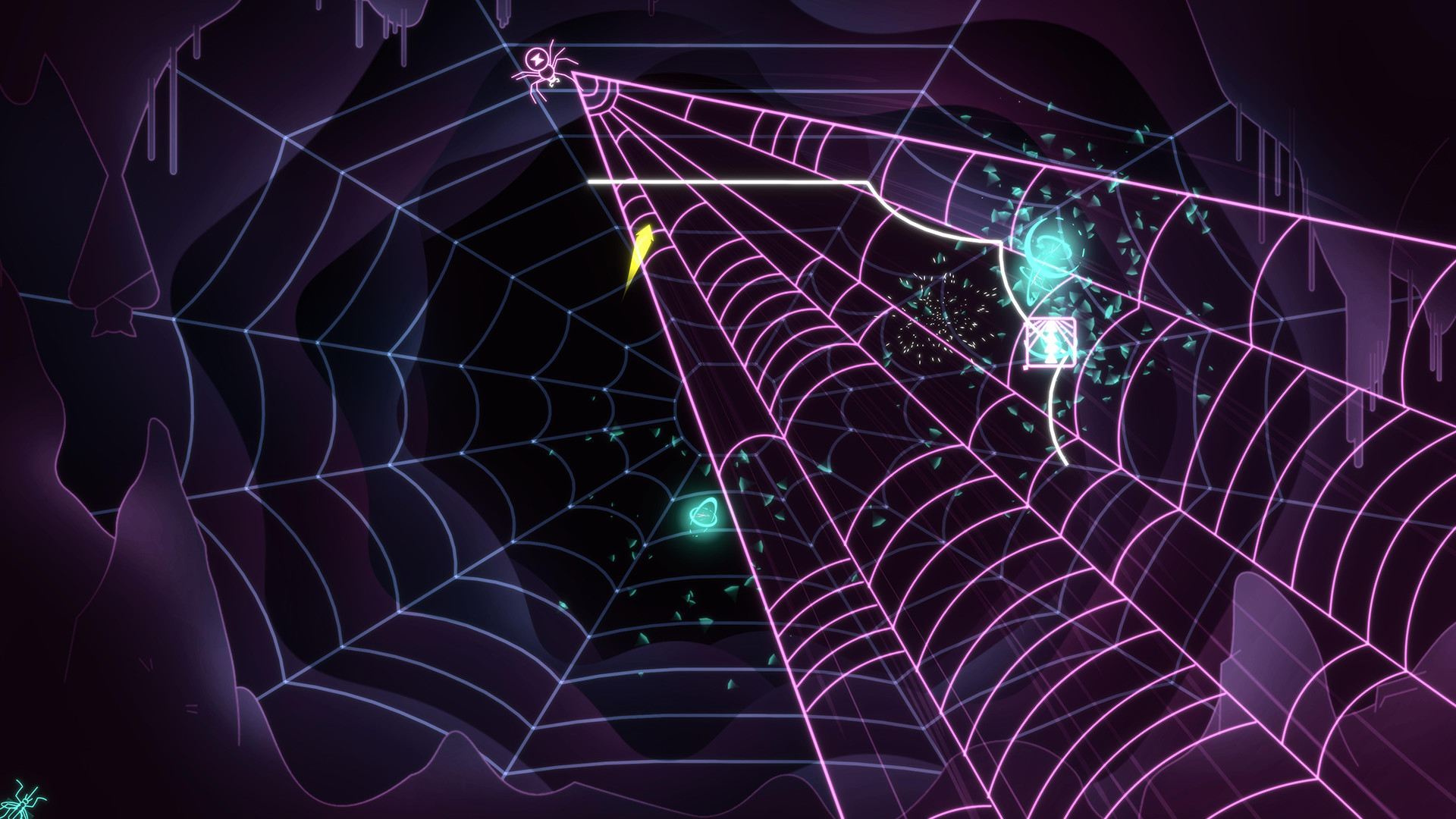 True to its arcade roots, the primary mode is an endless onslaught of bugs invading a spider’s web.  Mosquitos fly around erratically, hornets are similar but they also lay eggs, eggs hatch into explosive bomb bugs, lightning bugs fly in a long chain formation, whatever the yellow bugs are shoot revenge bullets, and the purple bugs drop a power-up.  It doesn’t sound like a lot of enemy types on paper but when the screen is packed with enemies it helps to be able to instantly identify a limited number of threat-types.  Plus it doesn’t help that strands of the web become impassable at random, so rather than an open arena you need to be constantly keeping an eye on ever-changing movement restrictions.

When each enemy is destroyed it drops the classic $ grubsteak, and rather than just be for points, these charge up the black widow’s special attack.  An indicator in the lower-left slowly fills in with each new pickup, and when deployed there’s a slight delay before the spider shoots out a giant web killing anything within its strands.  While the web attack is powerful it’s not a get-out-of-death free ticket, not only due to the firing delay but also because it shoots out at a wide angle in the direction the spider is firing.  All that power won’t protect you from backing into an enemy while lining up the shot, so it takes timing and a little careful strategy to use correctly. 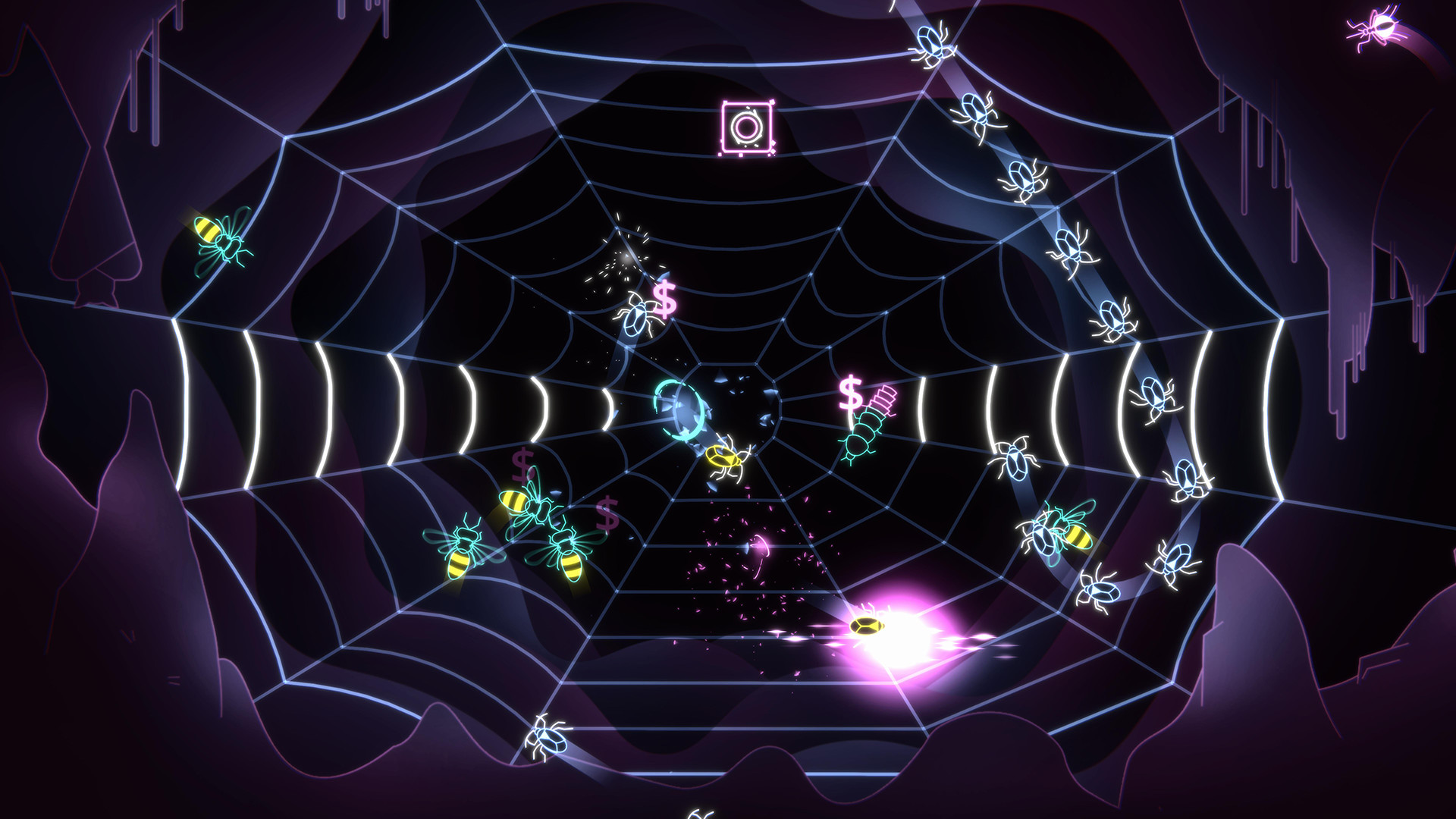 While the primary mode is an ever-escalating arcade assault, the secondary challenge modes are more focused.  Each of the numerous levels has its own goal, web layout and mix of enemies, and the objects range from surviving for a set period of time to killing a number of a specific type of enemy while the power-up bugs keep dropping a specific weapon type.  Each challenge has its own leaderboard, whether that be overall score on the way to completing the goal or time to reach it, depending on the level, so there’s always a reason to retry a favorite one.

The scoring, however, has exactly the same problems that Centipede: Recharged did.  Leaderboards show your score, whether that be local or global, but you only get to see the scores around yours rather than scroll through the list to see what the top spots look like.  Additionally, once the game is over the score is instantly gone unless it’s added to the local leaderboard, leaving you with only a vague idea of how well the latest attempt went.  Oddly enough there’s also less depth to the scoring system than in the original Black Widow, which awarded bonus points based on how long it took to collect the grubsteaks, not to mention the missing Bug Slayer.  In the original arcade game an invulnerable bug wandered the web occasionally eating enemies, which was both a help and hindrance.  Helpful for fewer enemies but hindrance because its invulnerable body could block shots meant for other critters, not to mention the lost scoring opportunity from anything it ate.  The web is more lonely without it around, but the extra enemies that would give 1982 hardware a nervous breakdown make up the difference a little. 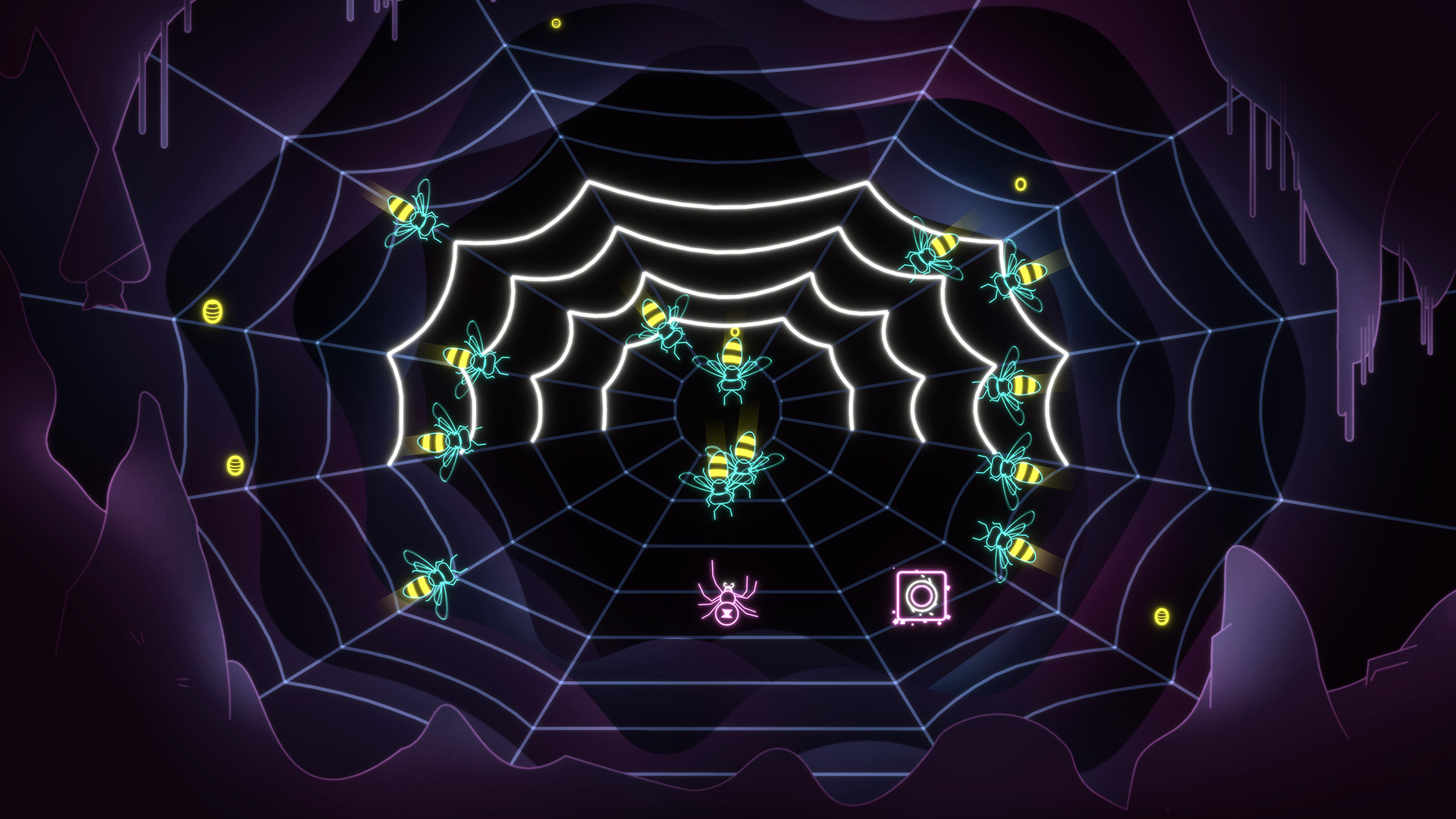 While it would have been nice to see Centipeded: Recharged‘s leaderboard and score-reporting issues addressed in Black Widow: Recharged, the twin-stick shooting action provides a great quick-hit arcade rush.  Each game lasts for a couple of minutes at most, even the best high-score run, and restarting is just about instant.  The free-form arcade mode is complemented nicely by the more-structured challenge modes, and it’s easy to spend a couple more minutes playing than planned by hopping back and forth between them.  Reviving Black Widow is a deep cut into Atari’s history, but it’s great to see it given a worthy sequel almost forty years since the original release.