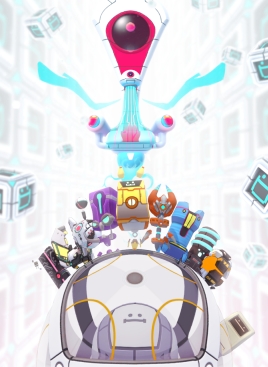 Well, after Move or Die and Overcooked, I have officially run out of unique ways to introduce indie multiplayer games by talking about the resurgence of games designed for couch-based multiplayer, so instead, just get to the point: ROBOT DEATH BATTLE!!! There’s just something inherently enjoyable about watching a bunch of machines beat the crap out of each other in arena combat, as BattleBots has repeatedly shown us. And it’s that kind of feeling that DreamSail Games is banking on with Blade Ballet, a top-down multiplayer action game with a heavy emphasis on spinning around and causing mayhem. But does this game truly deliver the same kind of gleeful carnage one would expect from a robot fight, or does it come up short?

The official story behind Blade Ballet’s setup is that millions of years after humanity’s extinction, robots are still being produced by automated factories at a large rate, and due to this overpopulation, find themselves participating in deathmatches when their time has eventually come. But none of that background is explained – or even hinted at, really – in the game itself. And let’s face it, you’re not here for any of that. You’re just here for some good old-fashioned multiplayer combat, and for the most part, the game delivers in that area.

Mind you, it’s not like the robots you’re playing as don’t have any personality, nor their world lacking in detail. Each of the ten characters has a nicely simple yet cartoonish design, with cute expressions and distinctive, eye-catching appearance that convey a lot of personality along with their unique moves. The graphics are bright and vibrant, perfectly showcasing a sleek, polished, futuristic world. It helps that the arenas you battle in are quite well-designed, nicely varied and featuring various obstacles such as conveyor belts, lasers, crumbling floors, explosives, et cetera that put up a challenge. Though there are but a handful of them, they are indeed a blast to play in, though you will need at least three players for the maximum effect (would it kill some of these games to add AI bots now and then?). Luckily, there is an online mode. 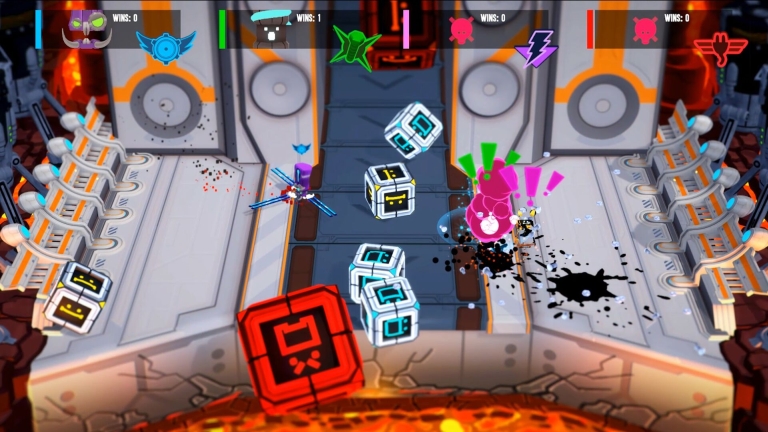 These arenas serve as the dueling grounds for Blade Ballet’s three modes, where you either have a limited amount of lives and fight to be the last one standing, duke it out to see who can get the most kills in a limited amount of time, or just play a game of soccer with a gigantic ball and two thresher-filled goals. Succeeding in each mode means mastering the game’s spin mechanic, where you use one button to spin clockwise and another counter-clockwise while moving around, triggering your unique special move (shield busters, teleportation, and more) when needed.

Each bot is outfitted with a weapon protruding from them in one way or another, and while it may seem like it’s just a simple case of “jam the pointy thing into the enemy” at first, there definitely is a lot more strategy to it than expected, having to spin in such a correct way and strike at the precise moment for maximum effect. Of course, things are designed in such a way that no matter what your approach is, each round is at least still enjoyable. Matches only last about a couple of minutes or so at most, making things more frantic and making sure that things never drag on, but it does feel at times like they could stand to be longer.

Indeed, if there is anything really holding Blade Ballet back from greatness, it’s that there needs to be more of it. While it’s still quite fun as is, this is a game that could vastly benefit from more arenas and/or game modes, with the current pool you’re given ending up feeling slightly repetitive at times. Not to mention that more customization elements are vastly needed here as well, since there’s no way to choose your battleground or match length at the moment. Even something like the aforementioned Move or Die’s pre-match voting could greatly help out here. The developers have promised more content in the weeks to come, but we’ll see what shows up.

I also should note that I played Blade Ballet on both the PC and PS4, in part because one of the friends I was playing with had constant connection issues with the PC version, barely able to even get into matches at times, with at least once such occurrence happening on my end as well. It’s unknown how rare an issue this is, though, and it hasn’t happened in the PS4 version yet, but that may be something to keep in mind. 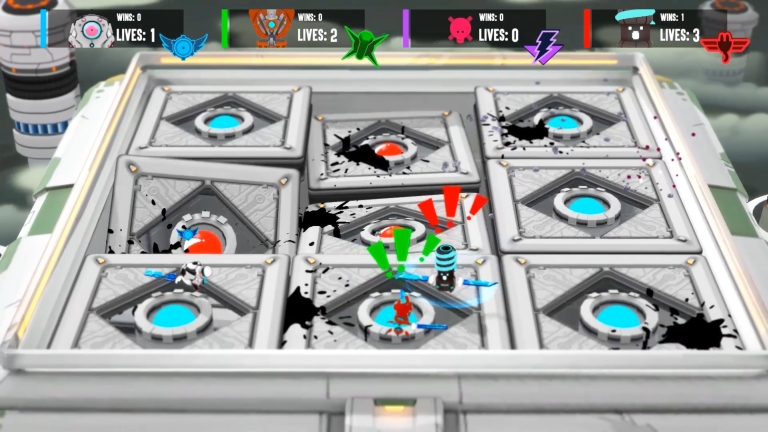 With a bit more content, Blade Ballet could have the potential to be another multiplayer classic, which is why hopefully we’ll see more additions to it in the future. As is, though, it’s still really fun, especially when combined with a few good friends. It’s the type of simple yet addictive gameplay that you can easily get into, and so this vivid yet violent robot rumble is worth taking a peek at. At the very least, it still proves that our lust for seeing hunks of metal smash each other into piles of scrap is alive and well, so yay to that!