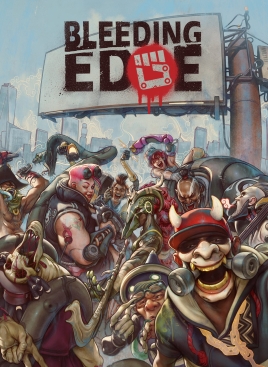 You have to feel a bit sorry for Bleeding Edge. The first title from acclaimed developers Ninja Theory after their acquisition by Microsoft, set to begin a bold new era for Xbox…and it ends up being released almost immediately after brand new Ori, Nioh, Doom, Animal Crossing and Half-Life games were all released to a public demanding them. Furthermore, as a team-based hero shooter — or hero fighter, to be more accurate — it faced stiff competition as part of a genre that many had written off. But Ninja Theory have brought with them a colorful world filled with unique characters and great combat to help stand out, but whether they brought enough of it also matters as well.

Now, one does not make a game such as this without a colorful cast of main characters to play as. And in that area, Bleeding Edge doesn’t disappoint. We have a scientist who uploaded their brain into a robot snake that accompanies their dying body, a paralyzed biker that now uses a giant wheel in place of their legs, a metal musician that can breathe fire, a professional gamer who heads into battle with a customized mech…uh, okay, I guess the Overwatch comparisons were inevitable. And speaking of Overwatch comparisons, while each character does have a bio, good background stories and plenty of personality, you sadly won’t see any present-day stories in the universe taking place (well, not yet, anyway).

Set in the future, Bleeding Edge sees your standard cyberpunk world where corrupt corporations rule everything, technology is advanced and cybernetic augments are available. Our main character, Daemon, just happens to lead a group of augmented misfits known as the Bleeding Edge, who run an underground fight club that seems to have made them into superstars. On top of that, Daemon has successfully pulled off the biggest corporate data breach ever in order to get revenge against the system that wronged him, and…well, so far that hasn’t seemed to lead anywhere. The world of Bleeding Edge is stylish and interesting (helped by and impressive art style and a sweet techno soundtrack), but like Overwatch, we’re going to want a lot more of the lore behind it. 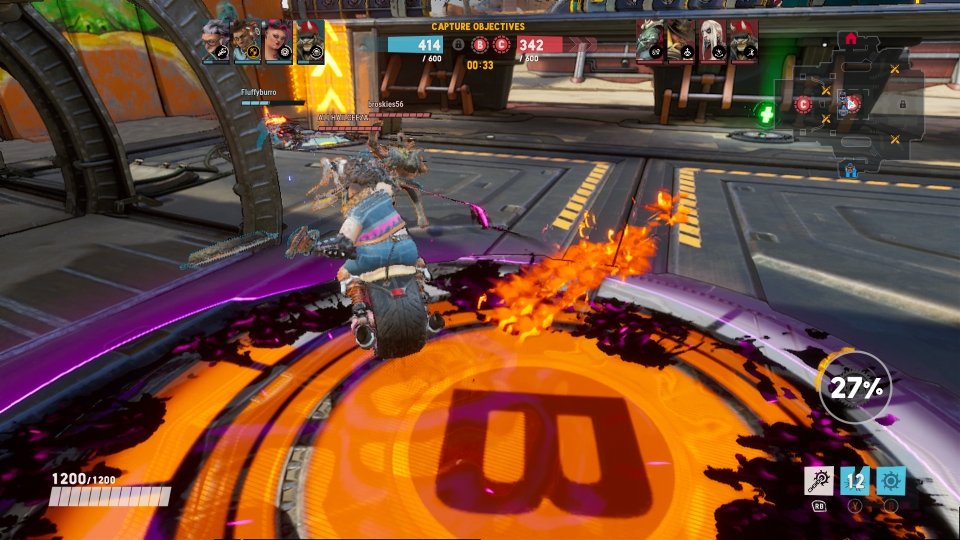 One way Bleeding Edge does find a way to differ itself heavily from Overwatch, though, is in the sheer amount of variety when it comes to combat options. On top of characters having one of three different classes — Damage, Support and Tank — they also have Melee and Ranged sub-classes on top of that. Everyone also has a set of three special attacks with cooldown timers, and an ultimate attack that builds up, but you also get to choose from one of two ultimates, typically different from each other in various ways. And on top of that, progressing through the game unlocks mods. You can apply up to three mods to a character, which provide passive benefits like granting more life, allowing certain attacks to deal more damage, increasing their radius, et cetera. It’s a neat little touch that adds a bit more strategy to the carnage.

The carnage, however, does feel like it leans in the favor of the melee fighters. A lot of the more fun attacks to work with are melee-based, emphasis is made on dodging and parrying, and while the melee controls are simple and quick to figure out, some of the ranged attacks and lock-on controls feel a tad awkward. Still, it’s a blast to try out every character, and again, the variety is great enough that there’s a character for every style of play. It really gives players a lot to work wit, and I haven’t even gotten into the multiple status effects, environmental hazards and hoverboards that you can summon to get around (though the summoning process feels too slow to be effective beyond getting back to battle after spawns).

As for the goals that the combat actually leads to, we have a pair of different game modes, each pitting teams of four against each other. Objective Control is your standard point capture where you either try to grab an area or steal it away, albeit with the the active points swapping every couple of minutes. Power Collection involves having to gather power cells scattered around the map, then trying to successfully deliver them to a designated area once all are gathered. Both require a good level of strategy, especially moreso in Power Collection. If you die while holding power cells, you drop all you have, allowing enemies to nab them, which can be particularly devastating if near the drop-off point with a huge amount. Meaning you have to make sure an ally covers you while you stand still in order to deliver the cells. 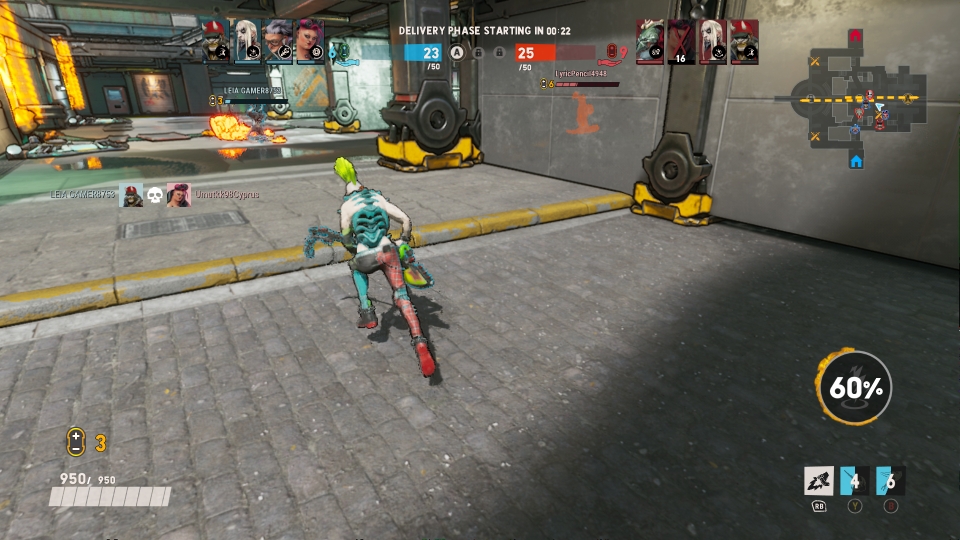 Bleeding Edge heavily stresses that teamwork is the key to success, from its tutorial to loading screens. As such, I was heavily interested to see how my first match went down. I jumped in and began a game of Point Capture, pitting two teams of four against each other. I headed out with the team, taking the hoverboard towards the first point, where we clashed with the opposing team over who would take it, which everyone trading blows and killing other players. Eventually though, a second capture point opened up and…no one went for it. Everyone on both teams just stayed in the center, beating each other up. So eventually, I decided to head and grab the point myself, even it that risked being without a team, hoping someone would follow my lead. I went there, grabbed the point…and no one else came.

I stood there, with a captured point, increasing my team’s score and thus our chances of winning…yet no one came. Eventually, I headed back, only to discover our two teams were just…fighting. No one seemed to care about any open points away from the center one. In fact, my team instead focused on attacking the other side in a hallway leading to the center point. Which would be blocking their main entrance, except for the existence of a side route the opponents never took. So unfortunately the quality of the players didn’t exactly make for the greatest first impression.

Now obviously, it would be stupid of me to blame Bleeding Edge for the behavior of my teammates. But I do think the scoring system doesn’t help. In both Objective Control and Power Collection, there’s a main method of scoring, either by having captured points continuously increase your score while active, or have each successful energy drop-off provide points. The first player to hit a certain total wins. Successfully killing opponents, however, also grants points. Not as much as the main goals, but more points nonetheless. As such, one can see how players with blood knight tendencies may try to focus on an alternate method for victory. It doesn’t help that it feels like a team kill is almost impossible to get back from without waiting for everyone to spawn, especially with the focus on melee combat. It seems like maybe just having a separate Deathmatch mode would have been a benefit. 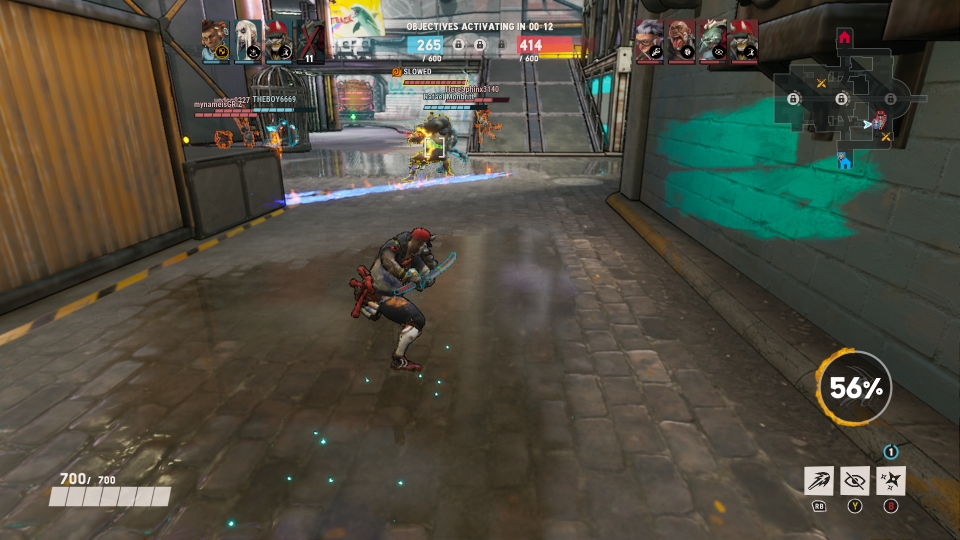 Still, when the combat worked, it really worked. The way things are set up and how the capture/drop-off points are frequently switched around adds for a lot of strategy, especially when your team has to try and juggle up to three of them at a time, or try to prevent another team from completing a delivery. And then there are the arenas themselves, which are well-designed and have several cool gimmicks to accompany them, be they trains that can speed right down the center, missile strikes that can hit anywhere, points that can rotate around the arena and require you to get around electrified fences to reach them, and much more. It definitely shows that there’s room for clever gameplay to match the equally clever world.

But concerning this clever gameplay, world and the levels within it, I just wish there was more of it. With only two modes and five available maps, you’re likely going to see everything the game has to offer in its current state in just a couple of hours of play time. There aren’t even a whole lot of skins, emotes and board styles to work towards unlocking with the currency you earn. Like any other multiplayer game in a similar vein, Ninja Theory are going to have to prove that they’re committed to Bleeding Edge with frequent updates. We do have a new fighter on the way soon — a dolphin in a mech suit, which is amazing — but the game will still need more than that if it wants to survive. 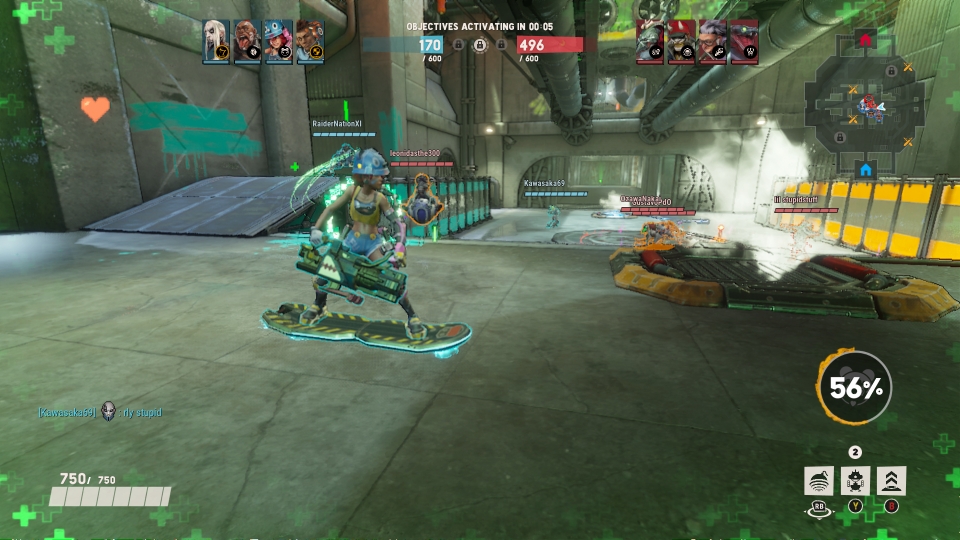 Bleeding Edge has a ton of potential, largely thanks to its fun and well-designed combat, colorful style and characters, and nicely-crafted levels and goals that emphasize the need for teamwork and strategy. But in trying to deliver so much when in comes to the fighting elements, it lets a few awkward moments slip through, and worse, puts less emphasis on elements like the story that need it, as well as a need for more content. It’s still an enjoyable multiplayer brawler as is, but future updates and additions will act as the true test to see if Bleeding Edge can truly improve and stand alongside the greats.