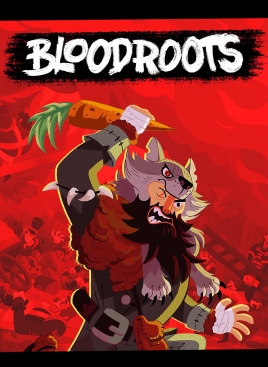 Revenge…the most worthless of causes. Well, maybe for the actual characters in various stories. In areas like video games, though, revenge can be a cause that allows you to whip out a ton of weapons and have a ton of fun as you engage in some classic arcade action, shredding every enemy that stands in your way to ribbons. Case in point, Bloodroots. Developer Paper Cult have crafted a tale of revenge that allows players to zip around and dole out epic punishments to hundreds of enemies and it comes in a rather attractive package. But does this dose of revenge lead to satisfying action or does it end up being worthless after all?

Bloodroots begins with a rather simple story. We see Mr. Wolf, our protagonist, head through an entire town full of fire and corpses, eventually being shot by his former gang of outlaws and left for dead. Yet somehow, he comes back to life a long while later with only one goal in mind: he has to track down his former crew, one member at a time, and get revenge on the mysterious Mr. Black Wolf, who pulled the trigger. Mr. Wolf believes in this fate, he doesn’t need to fake it, and it’s all he wants to be, so now watch him freak (okay, admittedly, I wrote that part simply because ever since this game was announced, I just really wanted an excuse to include Sepultura lyrics in an article for it, but it does still kind of work).

Actually, it wouldn’t be too out of place to describe Bloodroots’ presentation as something out of a heavy metal album. And yes, the actual soundtrack can best be described as a mix of synth and spaghetti Western (which ends up sounding appropriate and awesome for the setting and gameplay), but the carnage-soaked tale of revenge packed with brutality comes off as something to bang your head to. And I don’t even just mean “brutality” in terms of violence. Things may look more (relatively) light-hearted, but as you take out each gang member and have discussions with them, things get deeper and darker. Without spoiling anything, the later acts will find subtle ways to freak you out and question what Mr. Wolf is doing. It’s simple stuff on the surface, yet easily grabs your attention as it progresses. 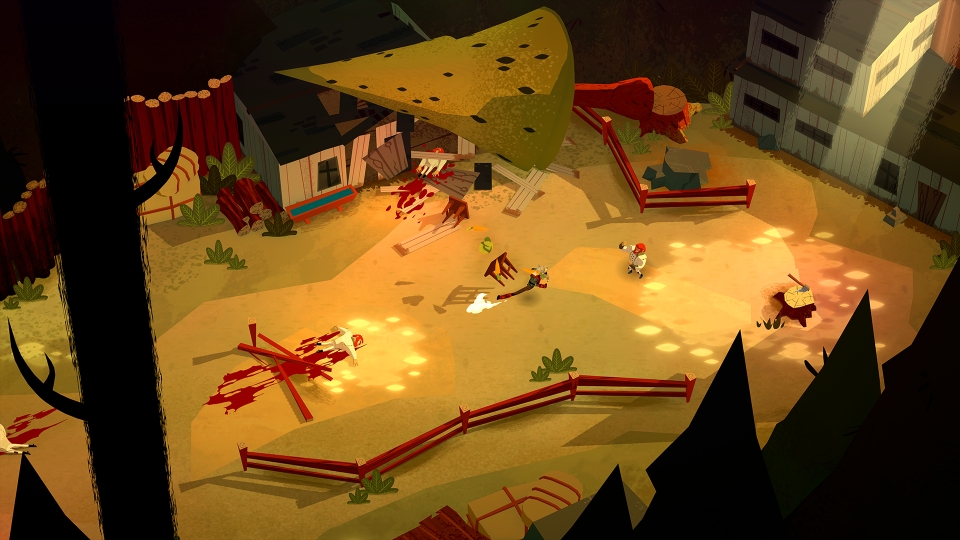 Even with the darker themes, though, Bloodroots still mainly stands out due to its style. Heavily inspired by the likes of Samurai Jack (oddly appropriate, as a new Samurai Jack game was just announced as I write this), the graphics are crisp and cartoonish with some nice animation, where things are nice and vibrant in order to create a good contrast to the uber-violence. On top of that, the game uses a “weird west” setting to its fullest, where laser guns, neon signs, huge bowling pins and jetpacks exist alongside elephant guns, mining tools and desert hideouts. It allows for the game’s world to have a ton of personality, and more importantly, gives you a unique arsenal to work with.

The main hook of Bloodroots is that Mr. Wolf can use virtually anything he can get his hands on as a weapon. Chairs, carrots, kitchen knives, shovels, fireworks, giant shoes, spears, and more are everywhere for him to pick up and use. Hell, you can even just use his bare fists if somehow out of options and you really need to take out someone like a gunner. Every weapon works in different ways, be it melee, long-range, something you need to wind up, or even unique ways like the shovel allowing you to pull off Shovel Knight-style death from above. Each weapon has a limited number of uses, though, so you have to be prepared to spot a new weapon and grab it in an instant. This is a game that places emphasis on quickness, after all, especially when certain enemies will hunt you down. 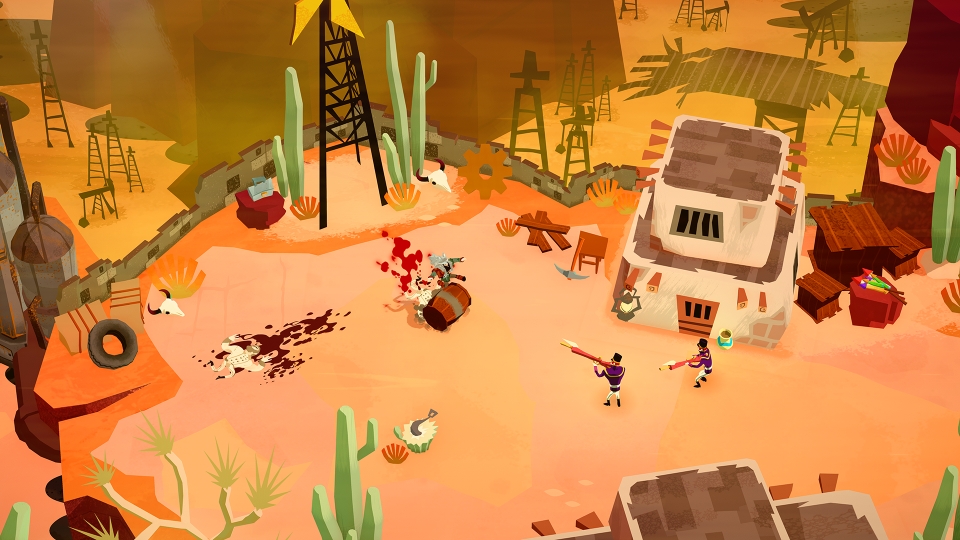 Luckily for players, the controls in Bloodroots are simple to get used to. One button jumps, one button attacks, one grabs items, end of story. It’s classic top-down action and draws comparison to the likes of Hotline Miami. But as expected with games like this and Hotline Miami, this is “easy to learn, hard to master” territory. Aside from having to experiment with each potential weapon in order to properly get a feel for how it works and where you should best use it, you also have an evolving variety of enemies to use it against.

Some enemies will charge at you, others are immune to thrown objects or immune to melee and some can even raise spiked stones or wield miniguns that provide a little bullet hell. And while most of these goons die in one hit, so does Mr. Wolf. So you have to pay attention and be ready for anything, quickly analyzing each batch of foes, with the core gameplay putting up a nice challenge…even if the levels can be cheap at times.

Bloodroots may have some nicely intense and fast-paced action, but the actual levels that said action takes place in could have used a little more work. For one, it feels like there are way too many insta-death hazards. The game actually features a few platforming segments and a few other segments for a change of place, but it also spreads bottomless pits and spikes throughout several areas as well. And with a few of the weapons like swords and barrels either having Mr. Wolf lunge forward or be ejected, it can become way too easy to find yourself accidentally hurtling towards doom. Or heading into the hazards because things get to frantic. And if you slip up, you have to start the whole area over. Yes, even if you’ve defeated all enemies and stumble while heading to the exit. It can get annoying. 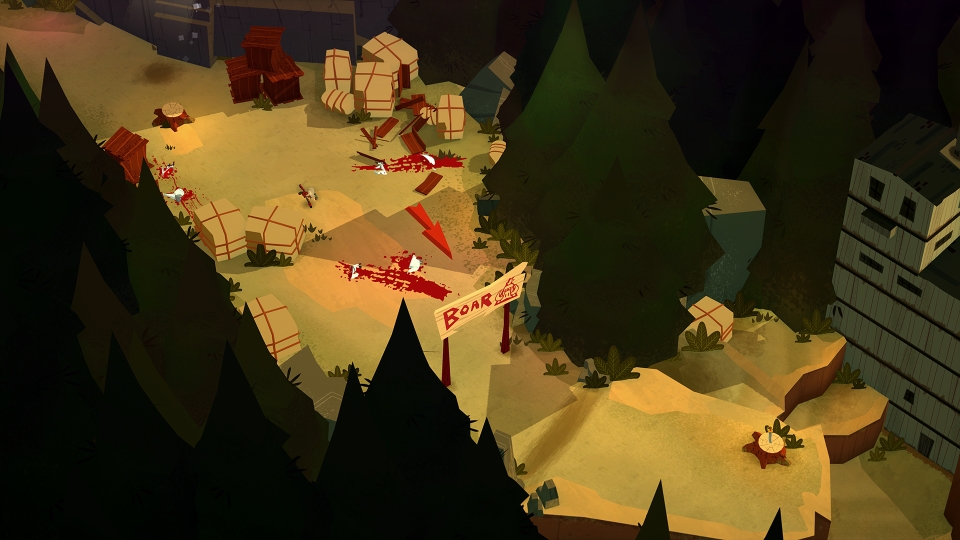 The annoyance level is not helped by the fact that more than a few of the levels in Bloodroots can feel like they go on for much longer than needed. It might be aggravating to compare the game to Hotline Miami more than once, but there each chapter/level featured about two to three stages each. This made sure that things were nice and quick while provide just enough of a challenge. But should you double the amount of stages like this, then you run the risk of being repetitive, dragging things out or losing some of the replayability factor. A lot of more arcade-style games like this tend to be best in short bursts, because when later levels can take up to twenty or thirty minutes for newcomers, it can get a bit tiring, and the desire to revisit them is lessened.

There is indeed a reason to revisit the levels, though. By beating each the bosses or racking up enough points in certain levels, you can unlock different animal headwear that provides various perks (yes, yet more parallels to Hotline Miami). It’s a fun addition, but you can only use them in levels you’ve already completed…and you may need them to even get some of the scores needed. The main thing always holding me back was the “Mobility” bonus at the end, which maxes out at a total of about eighty thousand points…and I never cracked two thousand. One gets the feeling that Bloodroots is banking heavily on appealing to speedrunners and I can see that happening. But those who want to go at their own pace may still find things enjoyable, if frustrating at points. 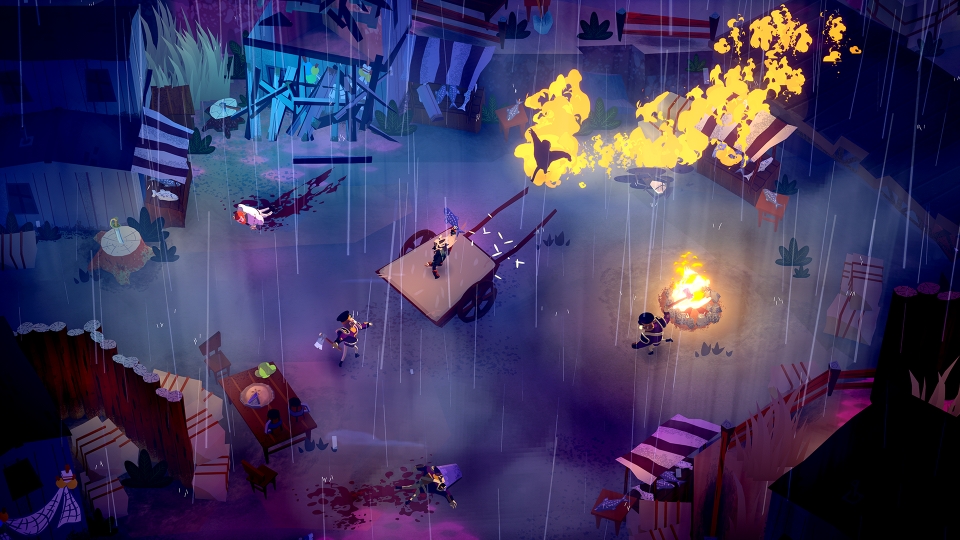 To be fair, though, when the areas in the levels get clever, they end up being a blast. Surprisingly, some of the best parts give you only a few weapons to work with and this can easily ramp up the tension. You may find yourself thrown into a pit with nothing but whirling, spiky enemies and gunners at all sides, and all you get are bows with reusable arrows that you have to fetch. Or you may have to use what can only be described as Chain Chomps to platform between enemies positioned over spiky pits. And then there are the bosses, who can put up some rather epic fights. These area are tense, challenging and fun, and can keep your heart racing, as are several of the regular ones. They just could have been spaced out better.

As a closer, it should be noted that Bloodroots does feature accessibility options. Should an area be frustrating you, there’s an option to simply clear it, or you can just flip on Invincible Mode, both of which will disable the leaderboards as exchange. It’s a nice addition for those who either just want to experience the story and/or the joyful carnage, and much like fellow tough-as-nails game Celeste, greatly recommends that you still give the game your best shot first and experience it the way it was intended. Unlike Celeste, however, one does wish there were more customizable options in between, since it comes off like you only have high or low options for difficulty. 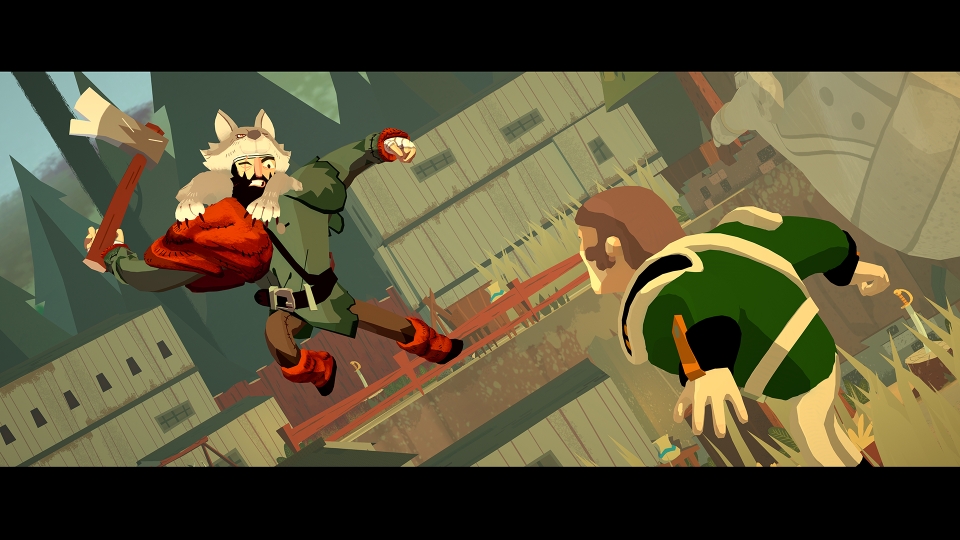 While some overly long levels and a few frustrating hazards threaten to hamper the game’s enjoyment, the amazing and cathartic action in Bloodroots still finds a way to power through these flaws in order to help deliver one highly enjoyable game. Be it the swift yet nicely chaotic gameplay that offers a good chunk of strategy and buckets of blood, the stylistic and attractive art style with a lot of flavor in every bit of scenery, or the simple yet captivating story, there’s a lot here to enjoy. Rain bring Paper Cult the strength, for they have earned it.