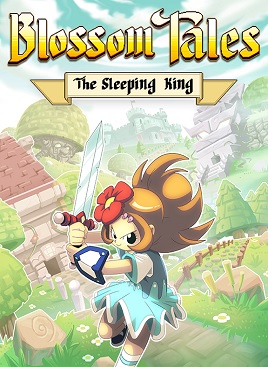 There are few times when one comes across a game like Castle Pixel’s Blossom Tales: The Sleeping King. That isn’t to say that this is original. Far from it, in fact. The design document creation can only be a piece of paper with Zelda written in black, bold letters, with a single line struck through and “Blossom Tales” scribbled underneath. Were one to be dismissive of this title, stating that it’s a knock off is a fair point to make. While the final product shows the developer’s unabashed influence in broad recognizable strokes, however, it can also stand alongside its very progenitor in terms of quality.

The story is framed by a old man telling his two grandchildren a late night story. Weary of hearing the tale of the young elf boy who saves the land of Hyrule, he proceeds to regale them with the story of Sir Lily, a freshly knighted heroine, who must rescue the king who was put into an eternal sleep by his villainous brother, Crocus. To do so, she must find the various ingredients for a concoction that can reverse the spell, while fighting off the creatures who were summoned forth, and/or infected with an out of character viciousness, by the malevolent wizard. Describing the gameplay is obviously incredibly simple. Anyone who has played Link’s Awakening or A Link to the Past absolutely knows what to expect regarding the look and feel of Sir Lily’s adventure through the Blossom Kingdom. She can swing a sword, charge for a spin attack, throw bombs, shoot arrows, and all of the rest. Using a decent sized overworld map to transition between dungeons, with areas naturally gated off by abilities found in those puzzle riddled temples, and making friends with townsfolk all recall the classic games. Seriously, even the enemy designs and music can find their roots in Nintendo’s nostalgic offerings. These elements have all been captured extremely well, though, making this a perfect title for anyone who longs for a new adventure with these retro trappings.

Despite the reductive description that can fit this title, there is more to it than being Zelda‘s non-union equivalent. For one, the world is riddled with all kinds of side quests. It seems like everywhere the player turns when exploring the overworld, there is some innocent villager in need of a favor. From pages of a diary to feathers, there are all kinds of fetch quests to find and complete. While fetch quests can be inherently dull, some of these are designed to add an extra reward for players to check all of the little nooks and crannies on the map, solving optional puzzles on occasion, or just making the player feel extra observant. Those that don’t fall along these lines can be completed while working on the main quest, adding an extra perk after moving the story further. The side excursions manage to be fun. 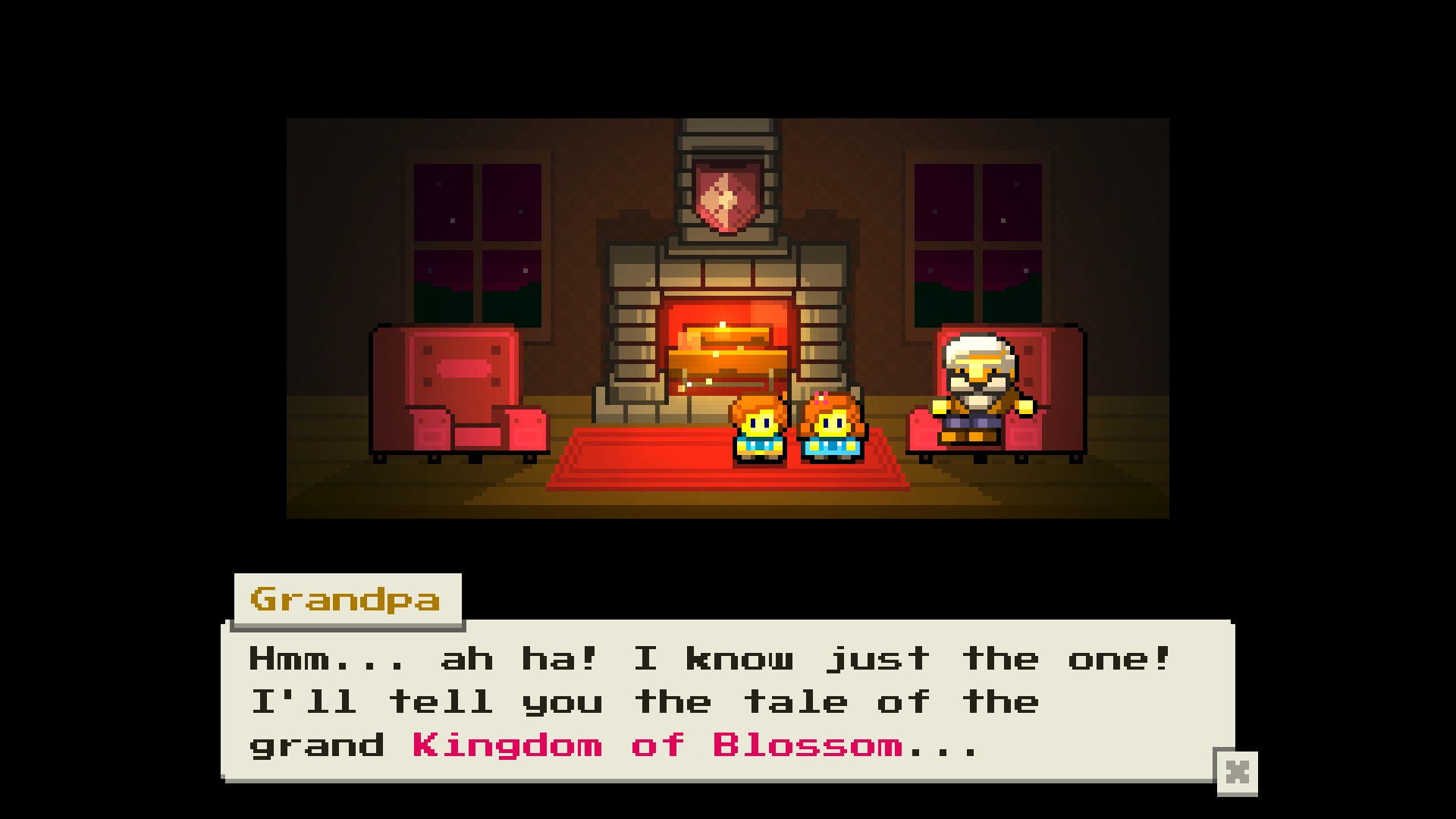 There is also more wit to the writing found here than one would normally expect. While there is no voice acting, the kids reactions to the grandfather’s tale denotes a sense of wonder in a surprisingly convincing manner. There is also all kinds of winking jokes for gamers, such as the grandson remarking how cool it is for a knight to have a shovel, and other really entertaining little touches. Crocus’ malignant waddle just makes me smile, and even the introductory dungeon beneath the castle has all sorts of little nods for those who pay attention.

What Blossom Tales does best can be found in the dungeons themselves. The very first one is incredibly easy to reintroduce the basic mechanics. The subsequent dungeon trials prove that Castle Pixel is designing for veterans who want to be challenged. Even the second dungeon is sprawling, with multiple paths that must be explored, and puzzles that force the player to make use of every basic talent in rapid succession. This is before additional skills are even found, stretching the player’s reasoning and skills. 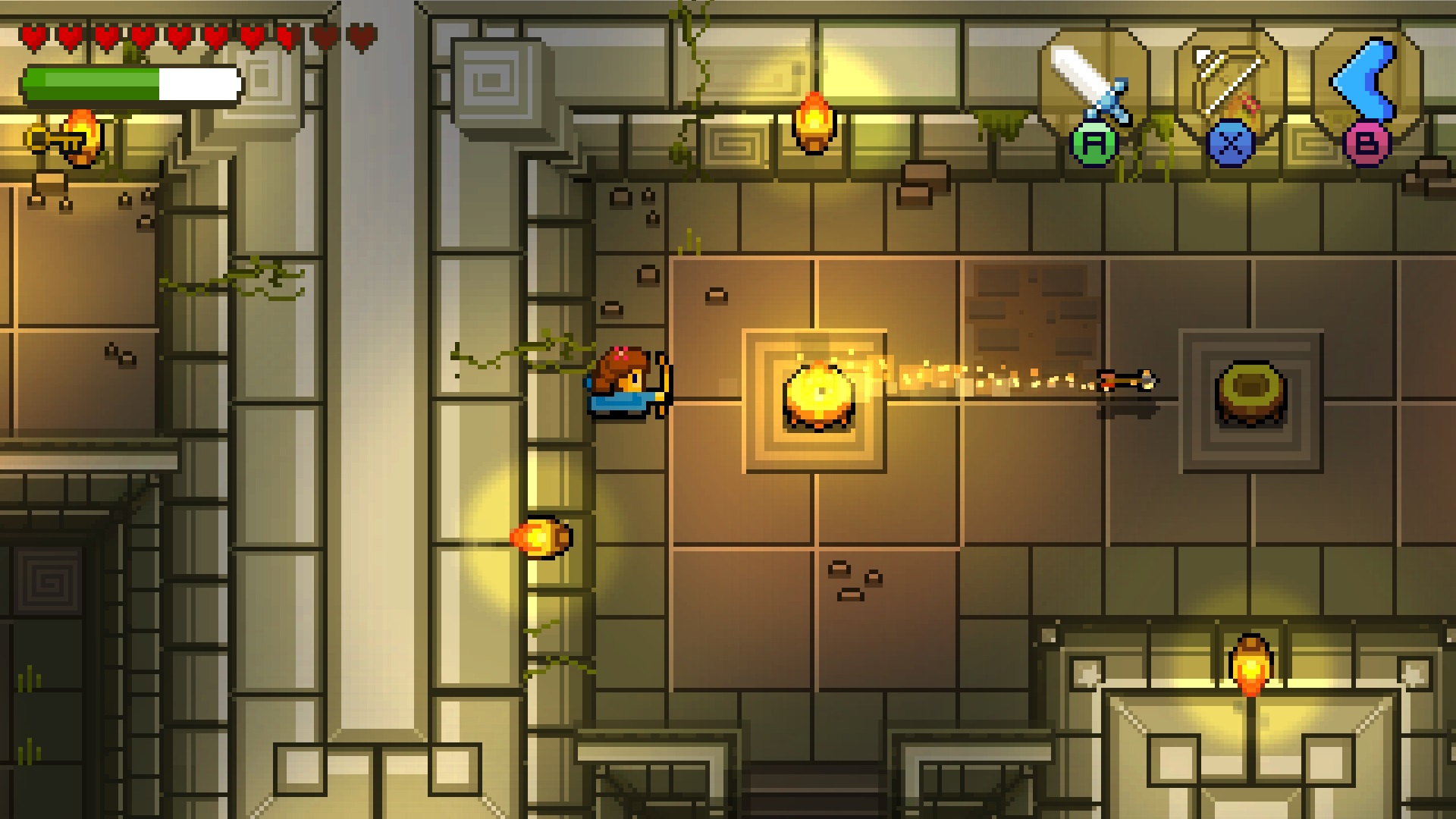 The difficulty does come with a major concession. Items, like bombs, utilize an energy meter that quickly recharges instead of forcing an item hunt to restock. While it might seem minor on the face of it, allowing mistakes to go unpunished as a solution is discovered encourages experimentation, making what could have been a frustrating experience to all but the most dedicated into a surmountable challenge. This very meter can also be extended by finding the coinciding items in the world, much like the expected Heart Containers. Of course, there are Heart Containers.

There is one small bit of warning: this is a less taxing game graphically and one would assume that it could be played most anywhere. Based on the aesthetic and design, I felt that it would be perfect for big screen mode to my TV using my reasonably powerful laptop that tops the specs on the Steam page easily. However, it hard crashed the laptop every time I attempted to go to full screen mode while doing this. I tried three times, with various adjustments made after each. This problem seemed to only happen on this particular laptop though, as I could not recreate it with other rigs, which leads me to believe that the issue is localized to some undiscovered conflict with the hardware make up of the device and the game. As such, this issue doesn’t affect the score. It simply seemed worth bringing up and point out that Castle Pixel is eager to help with any conflicts like this via their Steam message board should anyone else come across something this perplexing without the ability to just use a different PC. 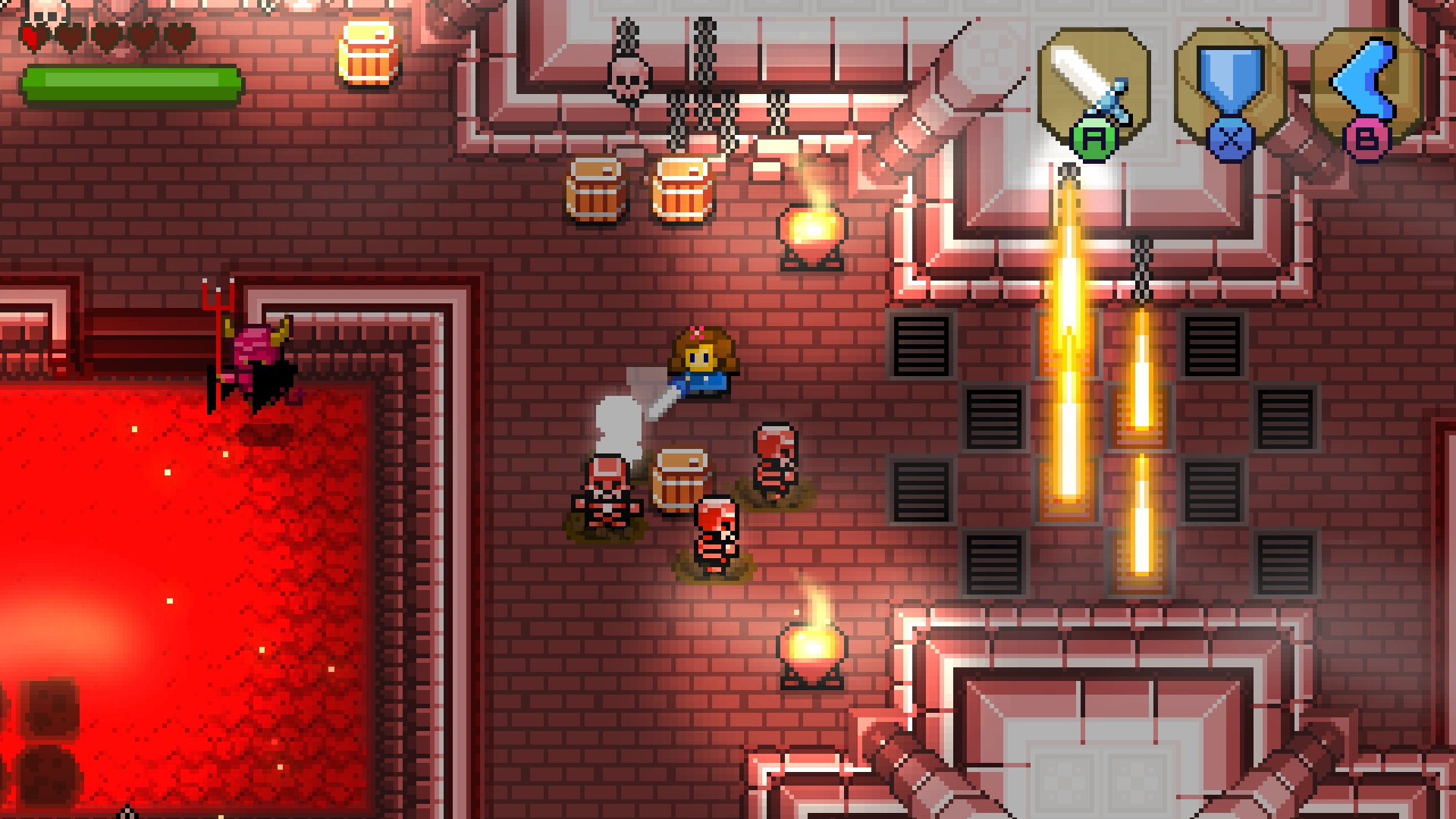 The decision as to whether or not Blossom Tales: The Sleeping King should be checked out boils down to the answer of a single question: does the potential buyer desire a new Zelda of the old school style? If the answer is yes, then this game is a must buy. All of the pieces are present and put together in an entertaining fashion, adhering close to the original design while upping the challenge and adding in more of a quest system. It’s not the most creative experience, but one can’t help but feel that Castle Pixel made precisely the game that they wanted to play. This level of care shows through in the final product, making it a perfect title for anyone who wants to recapture the sense of discovery felt while playing through A Link to the Past for the first time.