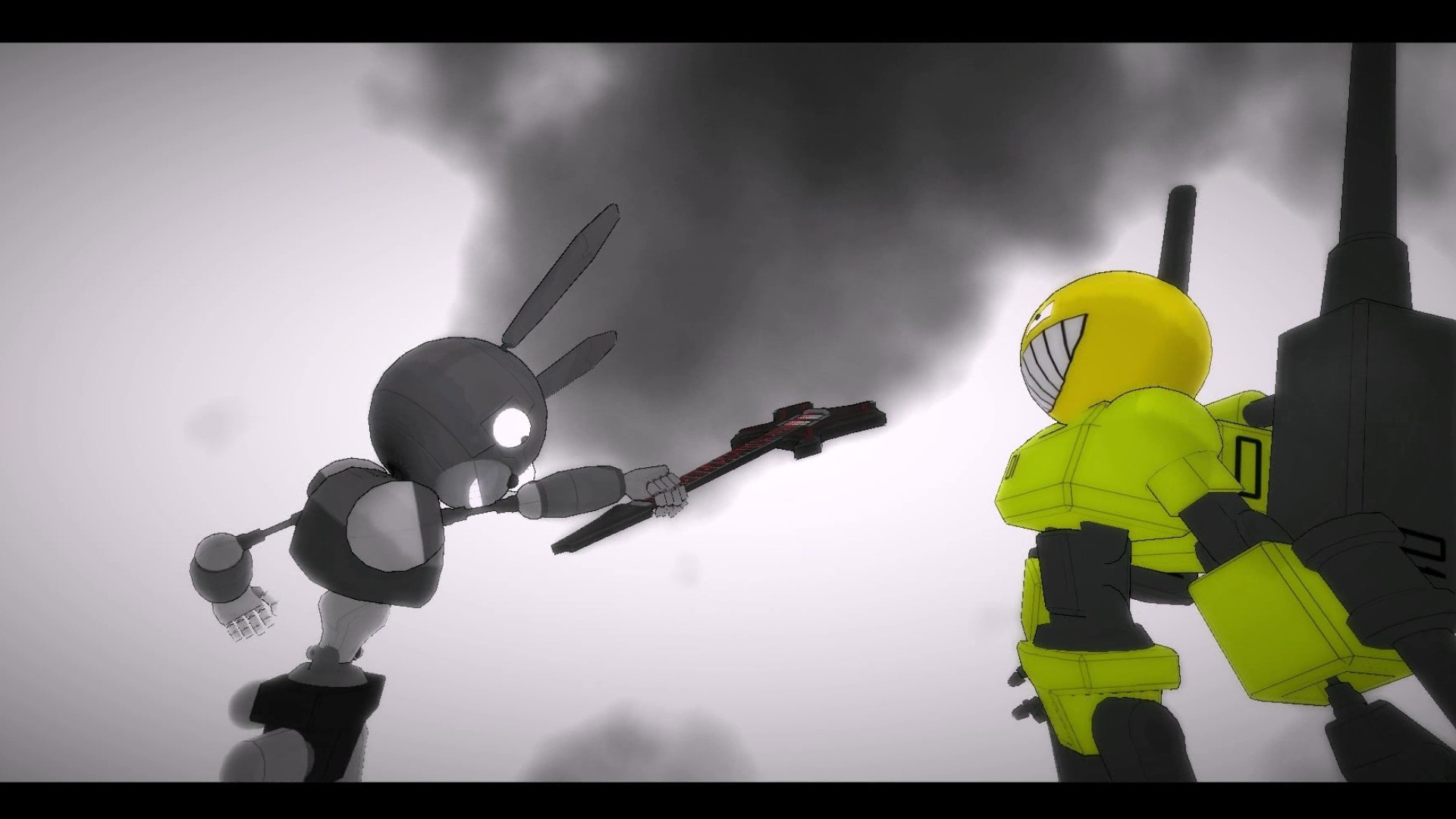 Games that use humor should be respected. With the AAA game industry so dead-set on being dramatic, seeing the indie scene embrace the goofier side is a glimmer of hope. Humor has a place in games and developers should be honored for trying to be funny. However, being funny is no substitute for being good. If a game is going to be wacky and never take itself seriously, it still needs to have substance to back it up. Enter Boo Bunny Plague, a game that puts every bit of its effort into trying to be funny, while sapping any life and enjoyment out of actually playing it. What a wreck. 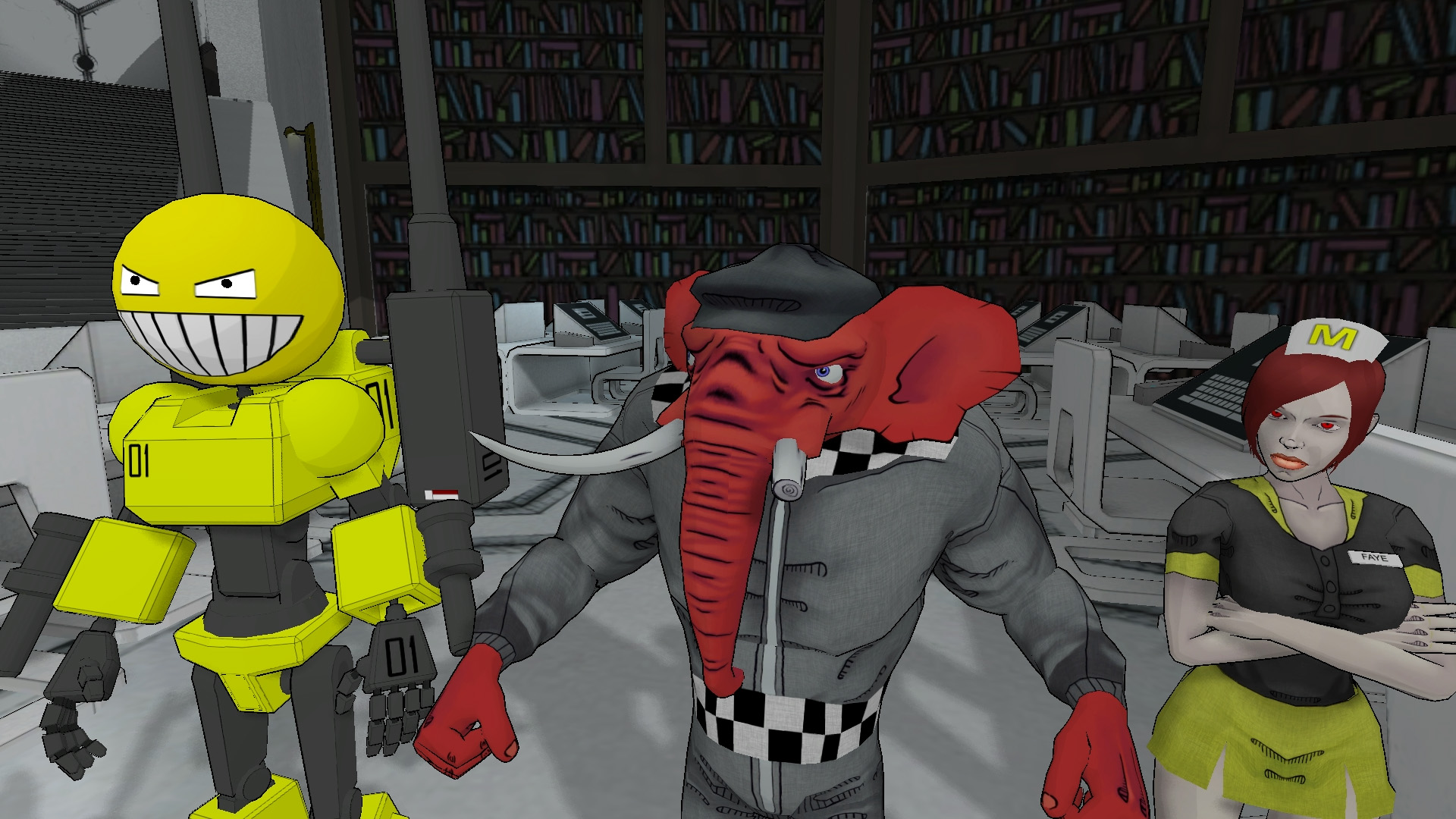 Boo Bunny Plague follows Bunny, a robot rabbit who is implanted with a computer virus and gains sentience. After attacking his “mother”, Bunny becomes a bounty hunter with his fellow robot Gunny, a smiley-faced robot with a wide array of destructive weaponry in his chassis. With pilot pachyderm Ganny and waitress/Satanic spawn Faye, Bunny and Gunny are out to make money and get Bunny an automatic repair kit for his metal body. Soon enough the crew is involved in a battle between gods, a battle that’s solely a stepping stone to getting paid. Boo Bunny Plague follows a “sci-fi spoof” identity, where the world saving is secondary to the selfish needs of the protagonists. It’s an interesting idea, one that offers some opportunity for good writing. The emphasis on musical cutscenes is surprisingly good, as some moments are actually pretty well-written. One scene has Bunny rap-battling the Norse goddess of Hell, a great moment in the story. Sadly, aside from Bunny, the other characters are underdeveloped, a missed opportunity to make their roles unique and fresh. With a few extra touch-ups, Boo Bunny Plague could’ve been a pretty solid sci-fi spoof movie.

Note that I said “movie.” I say “movie” because that’s what Boo Bunny Plague should’ve been. As a game, it’s terrible. It fails on nearly every possible level as one. Bunny’s main weapon is a guitar, but the combat is a button-mashing nightmare. Attacking is reserved to a single button with some of the worst collision detection you can imagine. You can wobble around most enemies and hammer on the attack button for easy victory. The moveset is pathetic. In fact, I can’t even call it a moveset, because there’s one attack. One. The only other notable combat move is the shield, which can be used with its own button command. The shield drains after prolonged use and its sole role is to reroute damage to a separate health bar. I can’t even begin to describe how bad the “combat” is in Boo Bunny Plague. 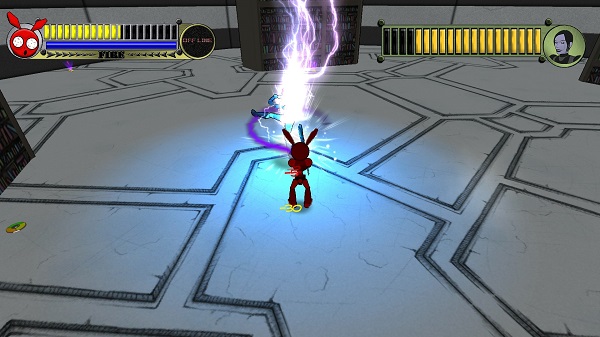 To make this lifeless combat worse, the game design is an absolute mess. The first main level requires Bunny to attack 25 thugs wandering around a lifeless, empty, unnecessarily spacious city. Thugs don’t provide any challenge aside from the annoyance of projectile attacks from off-screen, and once again, mashing the attack button is all you need to do to win. Bunny also moves terribly slow, so this level alone illustrates so many problems with the basic gameplay. Other levels have the gall to use platforming, which thanks to a weak jump, is a frustrating disaster. And if you thought any of these problems actually make the game harder, they don’t. Thanks to plentiful health pickups that respawn over time, you’re never at a disadvantage. If you’re low on health, grab a floating carrot, wander around for 15 seconds or so, then grab another when it spawns. Rinse and repeat.

Boss fights are surprisingly frequent, but they too are wrecked by bad control and broken health pickups. Most boss fights can be won with the same strategies as those with basic mooks: button-mashing and running around. There are a few slightly more interesting boss fights (a fight with the personification of Famine requires you to take poison and let her siphon it out of you to inflict damage), but a majority of the bosses are failed extensions of the already horrible combat. Boo Bunny Plague lasts only three hours, though you can replay to find hidden items if you feel like hating yourself today. That miniscule length might sound reasonable at the game’s basic pricing of $5 US, but this is a game that’s so mind-bogglingly awful that spending a cent toward it could be considered an act of self-inflicted bodily harm. It’s not worth it. Not at all. 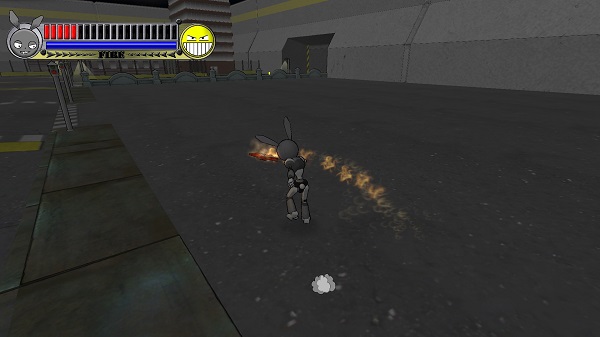 Boo Bunny Plague’s graphic design is sickeningly basic. Built with the Unity engine, every level is empty and uninteresting. Despite some switching up of locations from a space diner to Hell to a control room, there’s a high amount of bland grey shades in most levels. The animations are blocky, awkward, and suffer from plenty of glitches. One glitch didn’t load talking characters in a cutscene, leaving a blank stage with disembodied voices. And as stated earlier, collision detection is outright non-existent. It’s an eyesore of a game.

As a game that prides itself on musical cutscenes, Boo Bunny Plague has a big problem with that too. Bunny himself tries to have the charming idiocy of Brak from Space Ghost Coast to Coast, but only serves to become an annoying moron due to his inability to shut up. He will yammer on and on during boss fights and it will grate within seconds. Other characters’ voices are negligible since Bunny handles so much of the dialogue. The soundtrack tends to suffer less, however, as some songs are actually well-written, like the theme that plays during the Pestilence boss fight. It’s just a shame these songs are anchored down by such a failure of a game.

Boo Bunny Plague is not worth your time or money. It tries to hide its obvious flaws with random non-sequiturs and self-referential dialogue that only serve to highlight how devoid of fun it is. The combat is insultingly one-dimensional, drowning in repetition after only a few minutes. The controls are near-broken, the levels are unaccommodating to the player’s movement, the graphics will make you want to gouge your eyes out, and the dialogue is supported by an unfunny character with an annoying personality and voice. You might crack a smile at the rare moments of good writing in Boo Bunny Plague, but that smile will instantly disappear when you actually pick up the controller and play this total mess of a game. Boo Bunny Plague’s name couldn’t be more appropriate: this is a plague on the Steam storefront and should be avoided.