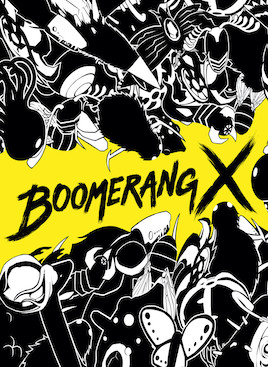 No matter how crazy it gets — no matter how easy it is to lose yourself to the ample, chaotic, flinging of one’s self haplessly across many an arena — Boomerang X still somehow manages to instill the importance of strategy. To not, as noted, let the haphazard madness get the better of you. To actually think about how you’re going to go about taking out the required number of blackened creatures in a given wave without dying. Trying your best to stop yourself from hurdling straight into that pillar of lava or that recently-emerged huddle of toxic bubbles, just because the game has granted quite the liberty with speed and movement. It’s perhaps the biggest accolade you can grant developer DANG! with their latest title.

A game whose own disconnect between the speed at which you move when on ground and the speed at which you move while bunny-hopping, should give you a clear, if comical, indication on what the developer is hoping for here. The lack of fall-damage and just how quickly you can go from zero to a hundred, should you need any more an indication. Boomerang X doesn’t mind a little indulgence with its mechanics and its delivery, even if said mechanics are the only element really propping up the experience. Not that there isn’t a mild effort to prop up the brief 2-3 hour run-time (excluding a secondary trek through the madness via New Game+). With its tiny doses of narrative and backstory that, even by its baffling climax, end up asking more questions than they answer. Or the very look of its arenas with their bright and bold slew of color palettes that make sure to skirt the entire spectrum come the game’s close.

Yet everything not involving the gameplay feels exactly that: a mild effort. Its “narrative,” if you can call it that, is far from interesting and its hard-to-ignore aesthetic is little more than decoration. One more bold switch of the palette, then it’s onto the next one. The point is, Boomerang X‘s intentions are evidently on its mechanics, its let-loose attitude. Some may be disheartened to hear that the game is sounding more and more like a one-trick pony — betting all its chips on black and hoping for that great return to materialize — but if that is indeed the case, at least this is one figurative pony with an amazing trick to perform. Of course, the game makes sure to build itself up to that inevitable unshackling of control. Its first series of waves to clear out have you firmly planted on the ground. Getting to grips with your trustee Shuriken-esque weapon of choice and the fact you can call it back at any time. Before long, you’re able to use it to teleport, to stop yourself (and your momentum) mid-air and in matter of a few fights, you’re free to play “the floor is lava” to your heart’s content. Movement is snappy, fluid and only encourages you more to zip faster and faster up and around the muti-level arenas. 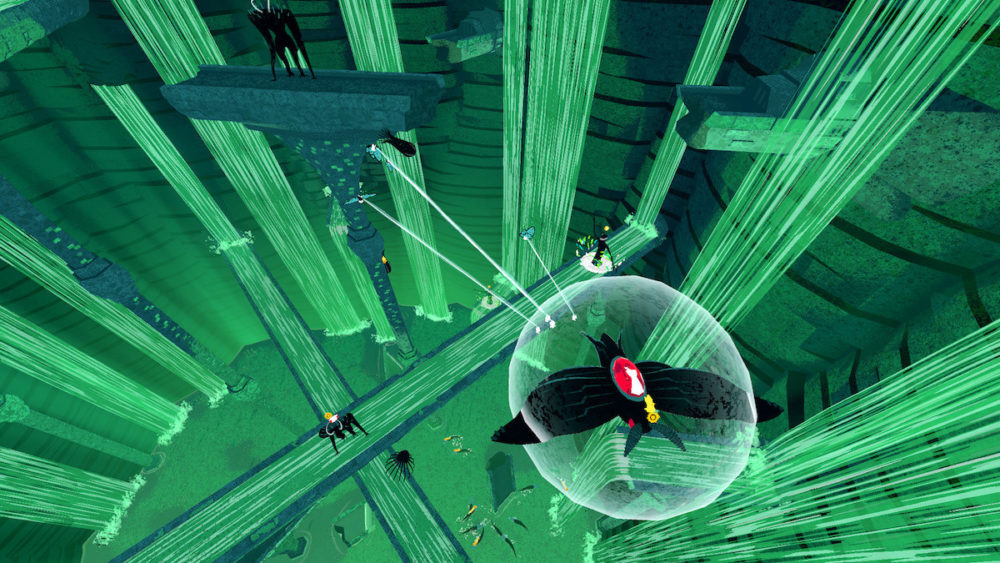 Soon enough, the reliance on a floor begins to get stripped out to the point that keeping one’s self afloat mid-air is no longer a luxury, but a necessity. Had the game stopped there so far as building on its initial premise, perhaps the worry of it being “one-note” may have been justified. Fortunately, Boomerang X manages to spice things up in a satisfying number of ways. And not just with how valuable health-recovery platforms are placed. Themselves not always an immediate guarantee to prove useful; any platform requires you to stop what you’re doing and wait a few precious second for that lone health icon to come back. Fitting that for a game built around speed, Boomerang X makes simply standing still its more tense and demanding parts to get right. The second way the game evolves, despite its short run-time, is that enemy types don’t just expand, but a fair number of said variety won’t simply wait for you to dispel them.

Early on the threat is minimal — mindlessly colliding with you if you’re not paying close attention to positioning — but later on, they begin to attack back. Better still, dealing with such an elevation in threat isn’t mitigated just with a solitary throw of one’s boomerang. Some enemies are protected by barriers activated by nearby, accompanying foes. Some require you to stun them before quickly moving behind them and nailing their weak-point. Then there are the larger types whose weak points aren’t immediately visible to spot, or require waiting for the opportune time to arrive. And given that each wave to clear requires you taking out a select and specific amount of foes — with it never made clear which ones it’s going to be — it quickly becomes apparent that simply holding back in the same position will quickly get you killed. 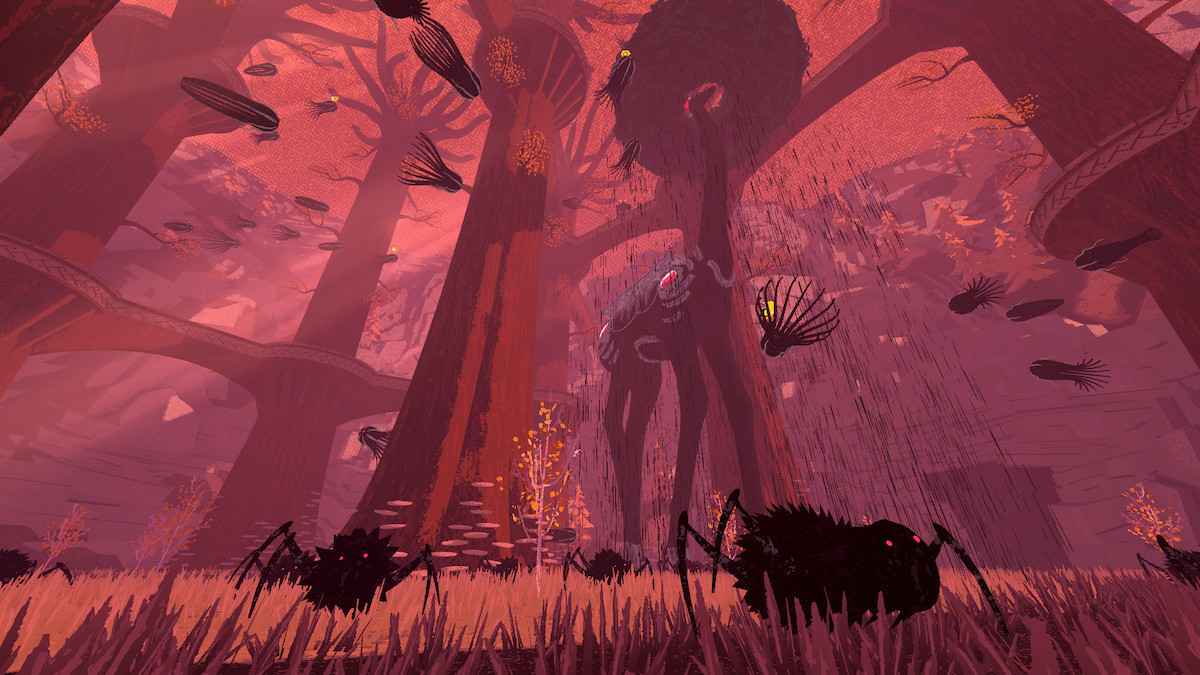 The game does make sure to prevent combat from feeling too much like a slog. The final few targets in a wave will be highlighted for example — useful when later arenas are near-flooded with clutters of fodder you have to navigate around — and later on in your travels, you acquire additional skills that encourage you more so to rack up combos of kills. One ability allows you to fire a shotgun-like blast to clear out large groups in front of you. Another makes any enemy you come into contact with explode. While these later abilities feel more like optional accompaniments rather than essential tools, it does still give players the incentive to better strategize on how they want to approach an incoming wave. Especially, as noted, later on when arenas end up throwing practically every enemy type at you. Foes that are aggressive, fast or those that are there just to annoyingly clutter the space. But rarely does that clutter feel like it takes away from the experience or that it isn’t there to encourage players to make the most of the tools at their disposal. And for the most part, the difficulty curve does follow a relatively smooth, upward trend from start to finish.

Unfortunate as it is that the climax, its final boss if you will, is the only moment where that smooth incline deviates wildly. Which in turn, leads into one of the minor criticisms: a lack of major boss fights. Or at least those that are orchestrated in the same multi-phase fashion that the closer ends up being. A couple more of these types of encounter may have made the finale feel less out-of-place than how it sadly ends up feeling. And as previously mentioned, while Boomerang X does make effort to inject a narrative or semblance to some grander lore baked into the world, it’s a woefully inadequate amount — one that, while not damaging, shines even more a light on how decorative its setting actually is. An accompaniment to the gameplay, yet one with nowhere near the level of depth or intrigue. 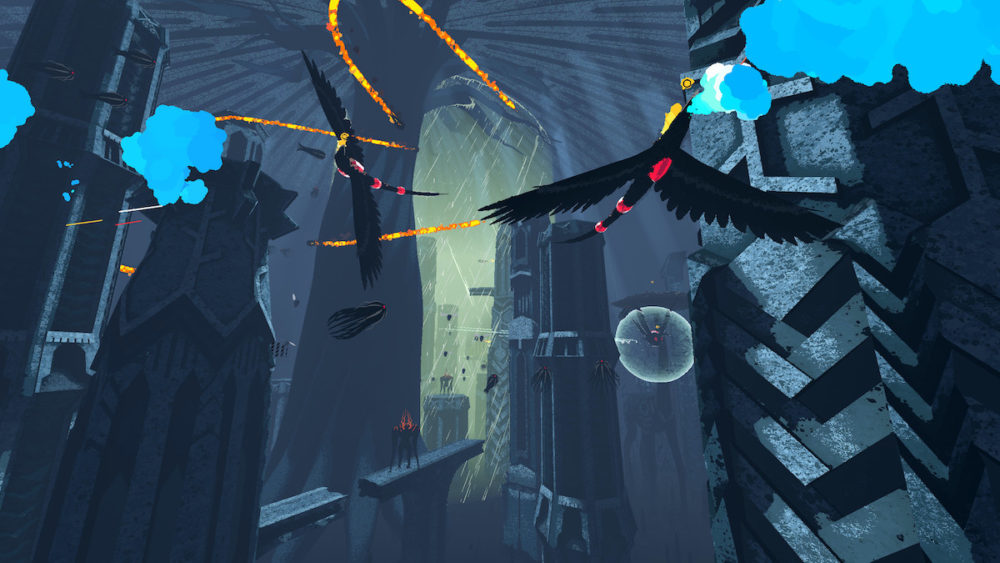 Boomerang X isn’t the lengthiest venture and for a game whose attraction lies solely in its gameplay, one’s enjoyment will naturally come down to how embedded in its mechanics you end up becoming. But even if the delivery is committing to that one lone trick, you can’t say that what DANG! has produced, brief it might be, doesn’t have its hooks. A core loop that is easy to control, easy to get to grips with, but throughout still finds ways to challenge and test players again and again. That added awareness for strategy — in dissuading players from losing themselves to its manic pace — is where the game rightly earns its added praise. Despite accompanying aspects of its presentation, its visuals and paper-thin allusion to narrative especially, barely adding depth or incentive to dig deeper. It may be a game whose focus is entirely singular, but what Boomerang X may lack in density, it makes up for with a fast-but-tactile style of gameplay that rarely gets old.