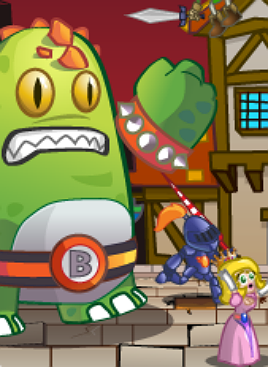 Sometimes, a game doesn’t need to be super deep, with nuanced mechanics, a layered storyline and an “easy to pick up, hard to master” control set. Sometimes, you just want to turn off your brain and mindlessly tap buttons until everything on-screen is dead. And not just that, but sometimes, you don’t want to be the hero of time and space, some lame Dudley Do-Right who butts his nose into everyone’s business so he can save a princess or somesuch other nonsense. No, sometimes you just want to play as the villain. Not some anti-hero with questionable morals who is ultimately fighting for good, but straight-up, the villain. You want to be the reason why the princess needs saving. You want to commit dastardly deeds and twirl your mustache and just kinda enjoy yourself for a little while. It’s okay; you can admit it. We’ve all been there. Boss! for the PlayStation Vita gets it, and that’s why it’s a surprisingly fun little game.

Boss! is a kid’s fantasy through and through, right down to its Crayola cutscenes and simple, charming humor. The game casts you as a boss monster rampaging through the Trogdon Kingdom, and level by level, you’ll destroy castles, punch wizards, and eat princesses in your wake. The more heroes you kill, the higher level you get and the better gear you can equip, ranging from a trucker hat to a medieval chestplate to a dead unicorn helmet to one of those funny pairs of glasses with the nose and the mustache — you know the type. It’s a charming game that goes out of its way to encourage you to create a boss that makes you smile. The gear you buy, like those funny glasses, all have different stats and fall out of fashion as you earn better items, but Boss! lets you customize the base look of your monster — from angry eyes to anime eyes, baring its ferocious teeth to smiling brightly, etc. — at no cost.

Especially given that brawlers as a genre haven’t worked super well past the days of coin-operated arcade cabinets, you’ll be surprised by how much find yourself enjoying Boss! if you go in with the right mindset. Its combat is satisfying and benefits greatly from being on the Vita. Tapping the X button pumps out a quick combo of light attacks, pressing square will use whatever weapon you have equipped for a heavy attack, and the L and R shoulder buttons operate as left and right rolls, respectively. Those are the basic controls, and they work really well for what they are. The light combo ends in an uppercut that sends most enemies flying upward and can be followed up with further attacks to juggle the enemy in the air well past what’s needed to kill them. You can bounce them off the walls at the edge of each level to keep them in the air longer, or if you’re in the middle of the level, you can uppercut them, then roll forward to chase them and punch them again to keep them up. It’s a similar feeling to juggling in a more serious fighting game, like Street Fighter or Mortal Kombat, but without the learning curve or memorization. The game also offers touch controls so you can swipe, tap, or hold the screen, but that proved to be a pretty maddening way to play. There are mobile versions of the game for much cheaper, but playing without the Vita’s dedicated controls is decidedly not the way to go. Play it on the Vita or not at all. 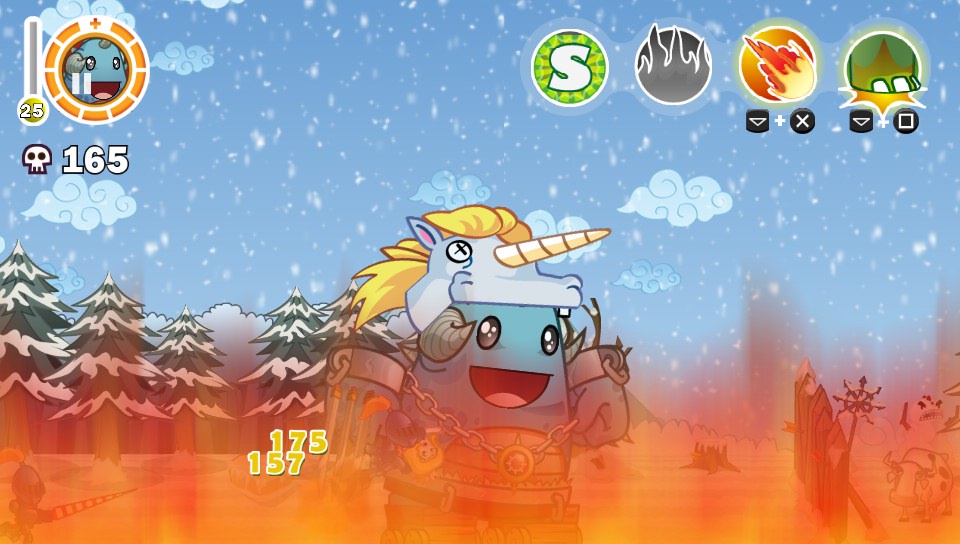 The game gets a little deeper when it mixes in rechargeable special attacks, like a big stomp that stuns enemies or a fire blast that burns, and the occasional bonus pick-up weapon, like a cow you can roll like a bowling ball, but overall, it’s still a pretty shallow game. Beyond the standard brawling, there are three additional modes to mix things up: Falling Heroes has you trying to stop an endless stream of descending enemies, Arena is just your standard wave-based survival mode and Run Hero Run casts you as one of the little grunt heroes you’ve been killing the entire game as he is chased by your boss. The first two modes aren’t worth your time, but the role reversal in Run Hero Run is initially kind of terrifying as your boss chases you down and eats you in whatever silly equipment you’ve given him. It doesn’t replace any of the many superior endless runners out there, but it adds a shot of variety the game desperately needs. Every level is basically just a flat canvas that lazily throws various configurations of the same enemy types at you and ends with a fight against a souped-up enemy to rival you; a boss, if you will. That format carries the game through to the end without much variation, which is disappointing because it means you’re either on board completely with what Boss! is selling, or you’re going to hate it. There’s just not really any “level design” to speak of here, and that’s going to turn some people off. 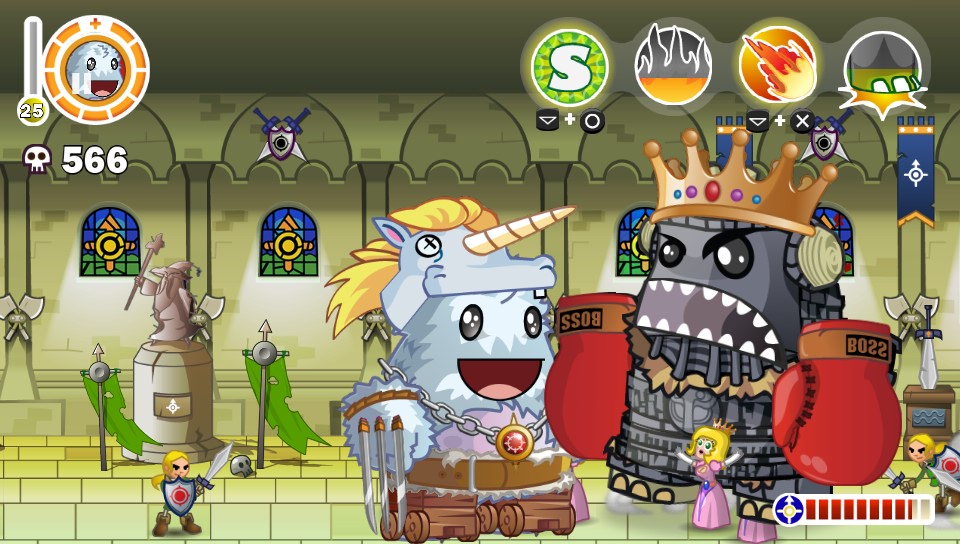 Cutting right down to it, Boss! is primarily for kids. It’s the perfect game to get on the cheap for your son or your little sister or whoever, and they’ll have a blast customizing their boss with silly outfits and expressions and jamming their way through the game’s twenty levels. Your kid sister might not appreciate or even notice the Eye of Sauron lurking discreetly in the background of the Christmas-themed North Pole levels as a funny little Easter egg, but you will, and you’ll smile. The price is far too steep for what you’re getting, but Boss! is still worth checking out at some point if you’re interested in simple, mindless fun.