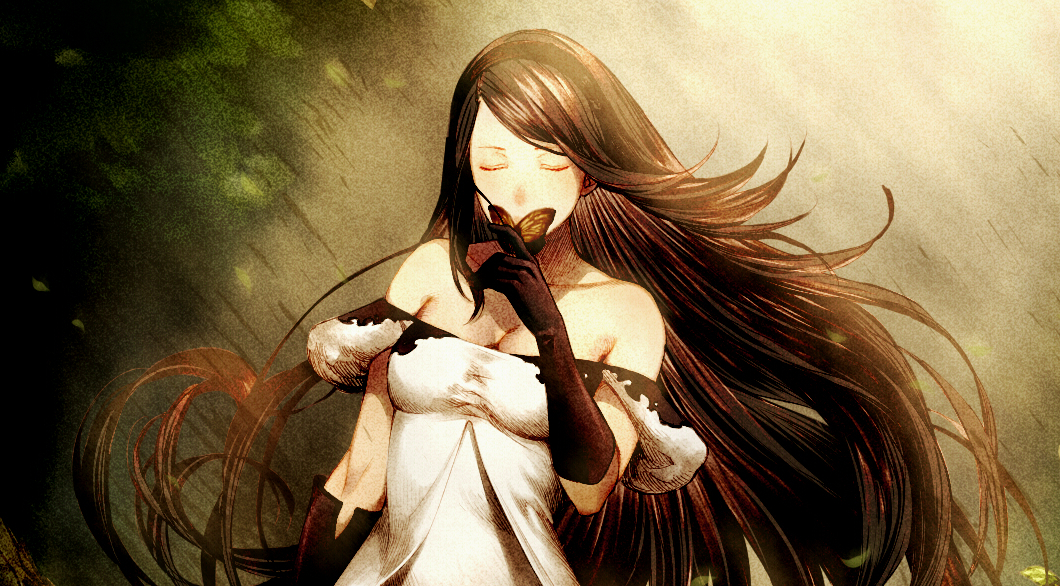 There’s a bevy of adjectives that could be used to describe Bravely Default, but the one that I kept coming back to throughout my time with Square Enix’s latest JRPG was “nostalgic.” From its aesthetic style to its gameplay approach, this is an experience rooted in the design conventions of a bygone era of gaming. But is epitomizing the very core of a genre that’s been ridiculed for half a decade and struggled to create a meaningful, mainstream splash for perhaps just as long such a good thing?

It goes without saying that a solid story is the very crux of the roleplaying game. It’s what draws players in and doesn’t let them go for hours on end. As such, an RPG truly is only as good as its story, characters and world. Fortunately, Bravely Default seems to understand this concept with an impressive degree of awareness by delivering an atmospheric experience that rivals some of the best games of its ilk. Thus, enter Tiz Arrior, our young hero whom lives a small life in the equally small town of Norende. As much as he is content with the ways of a simple existence, he soon finds out that his destiny is to be anything but ordinary. This is firmly cemented when a enormous cataclysm rips the lands asunder and swallows his town whole, leaving him as the sole survivor of the disaster. As the only remaining denizen of Norende, Tiz takes it upon himself to begin rebuilding his village.

During this process, our hero meets another adventurer, Agnes Oblige, a humble but ever-so important maiden of the coveted Wind Temple. From here, the two combine their efforts to restore the world from darkness, all the while facing a plethora of trials and tribulations that spell calamity at practically every turn. Thankfully, they meet up with two more capable warriors, Ringabel and Lee, who lend a helping hand in their quest for reconstruction. Unfortunately, the path they walk is not the one of least resistance, as any good save-the-world tale isn’t complete without a cast of tyrannical baddies who make it their life’s work thwarting the protagonist’s altruistic deeds whenever they can. 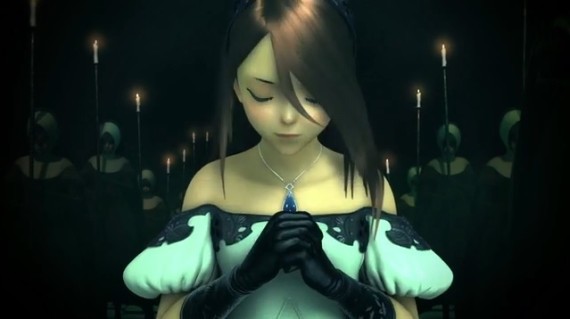 While the premise of Bravely Default is anything but original, it’s how the plot scrupulously unfolds, along with its expert pacing, that will resonate with folks for long after they put the game down. At full thrust, Bravely plays host to some heart-wrenching climaxes and jaw-dropping cinematic moments that lend themselves well to forging a narrative epic in scale and impactful in existential meaning. Its twists and turns may not always surprise as some will be fairly obvious and easy to spot long before they transpire on-screen, but on the whole, it actually is a JRPG that manages to effectively conceal its intentions throughout the course of its 40-hour adventure, particularly during the more important crescendos.

But setting plot elements aside, Bravely Default‘s characterization is worth talking about with some depth. For starters, the cast is one that adores, thanks to the developers’ tendency to give each cast member an abundance of screen time. During these moments, we bear witness plenty of moments that show each character’s most intimate thoughts, feelings and vulnerabilities. Through these instances of looking deeper at each character’s interactions and histories, we learn to empathize with their struggle and aspirations. It’s easy to become attached to the cast because of this, genuinely concerned about the danger they find themselves routinely in, and sincerely hoping for the best during every scenario that pits them against seemingly insurmountable odds. To build such personalities, and to have players invested in them so much is a feat not easily accomplished by an RPG or any game. Thus, Square Enix’s work should be lauded without question. 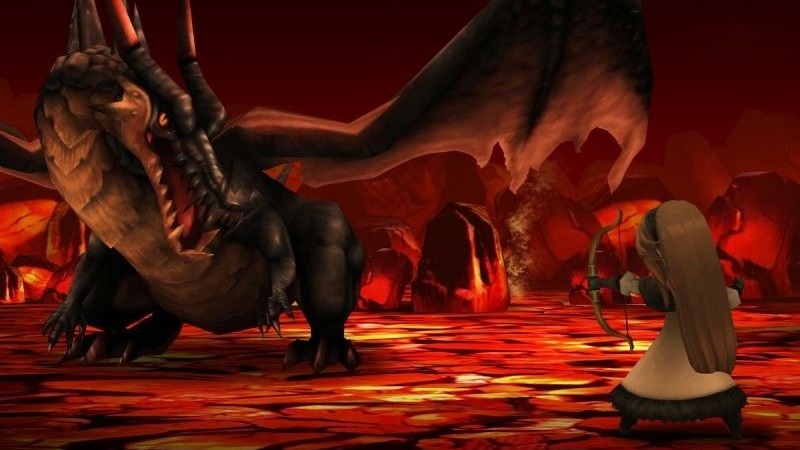 But Bravely Default isn’t just a solid story and compelling characters. This is an experience complete with robust gameplay from all types of design conventions. Let’s tackle the combat first, as this is where much of quest will take place. To put it plainly, the combat engine here is absurdly engaging for being what it is on paper. At first glance, things will look like traditional turn-based mechanics thanks to the almost archaic random-battle system. Therefore, delving a dungeon will play out like this: run around, look for loot, encounter a wide array of monsters, level up, trounce a boss. It’s a formula anyone who’s played a JRPG in the last two decades will be immediately familiar with. But when we strip away those superficial layers, we find that Bravely Default‘s combat is far deeper than it appears initially. In fact, the game manages to turn many of the assumed mechanics on their head with the “brave/default” system. Thanks to this deceivingly complex system, players won’t be able to just mash the attack button throughout a battle. Doing that will only result in a swift death, as Bravely Default is hardly a cake-walk. Instead of this mindless silliness,  players are encouraged to consider every action when in battle.

To “default” in combat is to defend in order to build up a character’s brave meter. Once the brave meter has filled up either partially or completely, a brave point can then be used to attack twice in a row. Unfortunately, using these points can result in a vulnerable state and without any remaining turns to take any kind of action, essentially rendering you a sitting duck. Clearly, this is a risk-reward system that requires fore-thought and careful planning, especially during the more challenging boss battles where battlefield prowess and wits are put to the test. As a result, this system is what makes the combat so clever and rewarding. It’s also extremely fair as when a player gets trampled, it’s almost always due to their lack of planning, and not some overly cheap AI opponent. In other words, the brave/default system ensures that the game never becomes dull or a grind, since each battle requires critical thinking — even the most basic of fights.

To further make sure things don’t become a mindless bore, Bravely Default employs a feature that allows battle frequency to be increased or decreased and battles themselves to be sped up, slown down or turned off completely. Blasphemy, right? That’s what we thought at first until we realized that it gives players total freedom to experience the game however they wish to. Have no desire to push through pointless, low-level enemies that serve no purpose to your leveling up? Turn off combat. Need to ensure that your level is adequate when getting ready to square off against a huge boss? Increase the battle frequency.

And then there’s the job system. Those who’ve played Final Fantasy III, V or 4 Heroes of Light will find the job setup similar, except far more full-bodied. Really, there’s just a lot more variety here than in those aforementioned titles, as players can combine job skills to create the ideal fighter for the circumstances facing the player. Of course, as a character uses a class more frequently in battle, their job level increases as well. A special feature called “Abilink” is also utilized, which lets players borrow the job levels of their friends’ characters, creating a unique experience for players to link up and help each other out indirectly. While there’s no actual multiplayer, this serves as a nice way to keep friends together in some manner. So what does all of this mean? Well, it’s simple: Bravely Default features perhaps the single best combat and gameplay customization in a JRPG on the market.

The title also just has a ton to do. Aside from the 40-50 hour story, there’s a spread of sidequests that could easily occupy you for an additional dozen or more hours. The best part: side quests actually matter and reward folks appropriately for their troubles, such as granting new jobs. There’s a Streetpass option as well, which has folks using the implemented town-building mini-game to help fellow players. Then, there are AR cards and even surprisingly helpful and non-intrusive microtransactions that only serve to help those who are struggling by letting them buy SP points that can in turn be used to boost abilities in battle. There’s even two different endings in the game! Phew. To sum it up, Bravely Default is a game that is loaded with content, and does its best to give players their money’s worth. 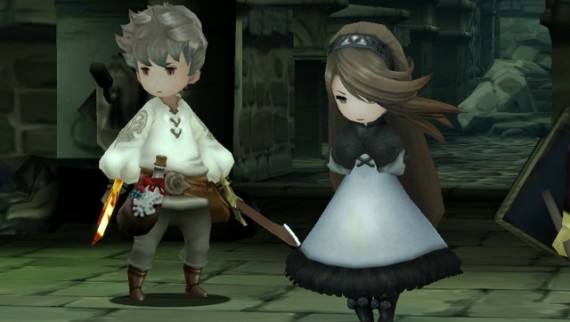 Of course, it wouldn’t be a Square Enix game without off-the-charts production values, and in true fashion, the studio has spared no expense here, giving players a wildly imaginative and crisp-looking game. The art direction is extreme evocative, concocting character and monster designs that are part chibi, part typical anime-inspired designs. The style is something reminiscent to that of a Pixar film, with great use of the color palette and aesthetic diversity; the towns look especially mesmerizing, with their size and individualized charm making it a joy to visit a new one. The hand-drawn backgrounds also go a long way in dazzling, as well as evoking nostalgia for those of us who grew up during an era of gaming when pre-rendered backgrounds were the new hotness. Yet again, this is just one of Bravely‘s small nods to the games of the past that paved the way. The menu system is sleek too, again using something akin to older JRPGs. Overall, the graphics themselves are not the 3DS’s best — in truth, they can be fairly pixelated at times — but they’re still sharp all the same, mostly because of the strong stylistic aspects. The 3D effect is something of a triumph as well.

Speaking of triumphs, the game’s soundtrack is just downright hypnotizing. Composer Revo takes us through a range of emotions with a sweeping score that can lay heavy on our hearts or uplift our spirits during the more rousing moments of heroism and victory. It’s nevertheless a soundtrack that may take some getting used to. This isn’t the work of Nobuo Uematsu, and therefore, may seem almost strange at first because of how varied it is. But once that short acclimation period is over, players will immediately recognize how each song is arranged and simply marvel at how each piece comes together to deliver tunes that are plump with emotionality.

It’s a shame that the terms “masterpiece” and “genre-benchmark” are thrown around so haphazardly, because when a title that truly personifies those words like Bravely Default comes along, they seem cliche and hyperbolic to use. Nevertheless, those are among the expansive list of words that can be used to describe just how magical a game this really is. Its story and characters are spellbinding, beautiful in their construction and heartwarming in their personalities, while its gameplay is an impressive balance of old-school design and new-age philosophies. This is a title clearly handled with a delicate amount of care, captivating with its imagainative art direction, moving soundtrack and thematic significance. From top to bottom, Bravely Default matches its name; this is a bold, brave step forward for the JRPG genre and Square Enix, as they’ve somehow managed to out-Final Fantasy Final Fantasy. Bravely Default is a flagship series in the making and worth exploring even for the uninitiated; its craftsmanship is simply too good a testament to the medium to pass up.