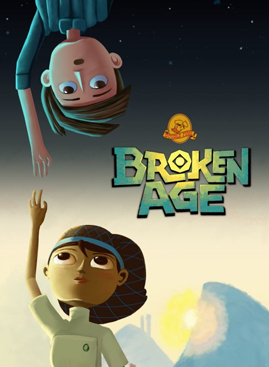 Playing Broken Age Act Two is like taking a trip down memory lane. Wait, sorry, I misspoke. Playing Broken Age Act Two necessitates that you scour memory lane with a fine-toothed comb, trying to recover details from a three hour span of your life that happened over a year ago. Kickstarter backers, fans and reviewers alike have been waiting a long time for the second installment of Double Fine’s platform-defining adventure game, and while it’s very good, that wait is ultimately too detrimental to the overall experience.

There are many different ways to deliver episodic content, some less acceptable than others. Life is Strange does it better than any other game on the market, with short, deeply interwoven episodes released only a few months apart. Republique shows that you can get away with much less frequent release intervals if you properly break up the stories of your installments and introduce new gameplay elements in each one. Kentucky Route Zero proves you can go up to a year between installments if every episode is a masterpiece. Broken Age represents the worst possible approach – breaking a single story into two installments at an arbitrary halfway point because your team ran out of money. It didn’t work for Broken Sword 5, and those episodes were only split by five months.  With a year and four months (almost to the day) since Broken Age Act 1 came out, this conclusion has a LOT of anticipation to live up to. It doesn’t manage by half.

Normally I’m pretty gung-ho about spoilers in my reviews of episodic games, but I feel like I shouldn’t divulge too much about the first act of Broken Age. The only way to enjoy this game is to run through it in one go. Act One left off on a solid cliffhanger, marking a perfect midpoint in the stories of Shay and Vella with a spectacular plot twist that threw everything we thought we knew about their worlds into a new light. The problem – and it is sort of a huge problem – is that we’ve had over a year to contemplate every implication of that twist. A large part of the second act involves explaining the exact purpose behind Shay’s baby-proofed space journey and the Maiden’s Feasts of Vella’s world, but aside from some of the particulars most of it is stuff that we’ve already figured out. There is one enjoyable revelation about the Mom and Dad computers from Shay’s ship, but it comes right at the start of the act and doesn’t have much impact as a result. 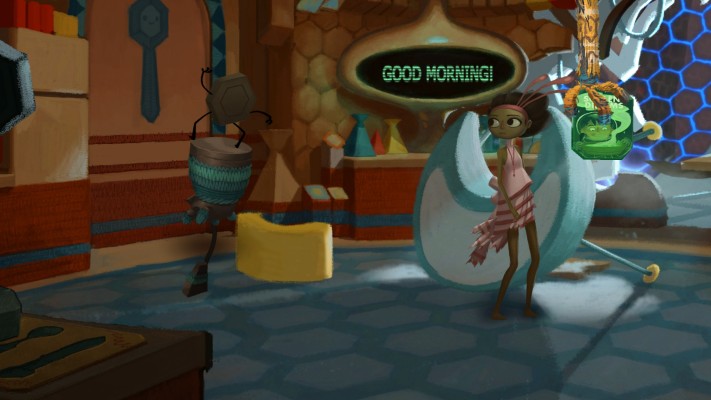 Aside from that expository content, the bulk of Act 2 is devoted to the game’s climax, and as far removed as we are from the launch of Act 1 it feels kind of devoid of necessary context. I was expecting for this episode to start a little slow and ease into things since Shay and Vella have both been cast into strange new places, but from the word go we’re given access to basically the entire play area of the last Act. It makes sense as the second half of a continuous game, and works well as an escalation of the buildup from the first part, but on its own the episode feels a little exhausting.

Conversely, it also feels as though the episode doesn’t go quite big enough to justify the excruciating delay. The game ramps up to a frantic, urgent finale with challenging, time-sensitive puzzles built around a pretty clever mechanic, but then it caps off with a terse final scene that offers very little in the way of closure. Throughout the entire game Shay and Vella don’t say a single word to each other, and the story ends with a silent smile. That sort of ending would be cute if we’d gotten the whole game right away, or even in the span of a few months, but when you’ve been waiting over a year to see these characters interact it ends up being a colossal letdown. 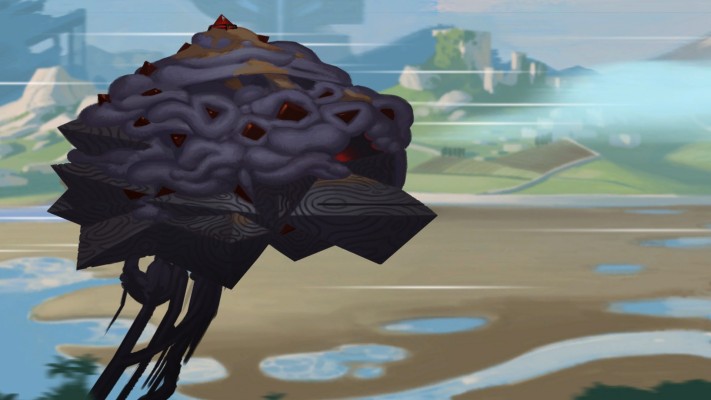 I know I keep harping on the release gap, but it really does color the entire experience. Puzzles that should have been straightforward felt frustrating and inane because I needed to re-learn my way around the environments. There are problems with the puzzles beyond that – too many require tedious backtracking, some have a number of seemingly viable solutions that can’t be used for arbitrary reasons, and a couple require unreasonable intuitive leaps– but all of those flaws are exacerbated by the nagging feeling that you’ve forgotten something that the designer thinks happened less than an hour ago.

I can’t stress enough that this is a good (great, even) adventure game. The writing is witty and often laugh-out-loud funny, the art style is charming and beautiful, and the puzzles have a nice flow to them – at least if you play through from beginning to end. The character-switching dynamic gives each puzzle breathing room without resorting to a hint system, and it’s even used for some clever interactions in the second half. Broken Age’s A-list voice cast delivers some of the best performances in all of gaming history, backed by a delightful soundtrack that’s a career highlight for Peter McConnell, the man behind Grim Fandango, Psychonauts, Brutal Legend, and Hearthstone. It’s kind of incredible just how much top-tier talent came together to make this game happen, and while I’m disappointed that Double Fine ran through a 3.5 million dollar budget doing it, the final product is pretty incredible. If you haven’t played it yet, you definitely should, but this isn’t a review of the final product. 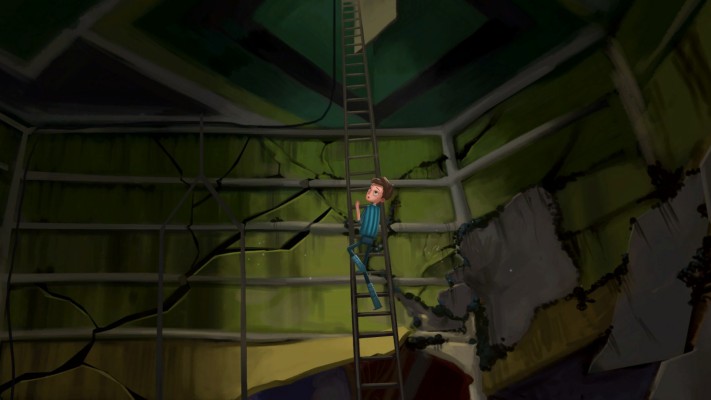 I really want to love Broken Age Act 2 as much as I loved the first part. As a complete package, the game is beautiful, funny and well-designed. Its world is full of imaginative characters and environments, and its story is a rollercoaster of a mystery built around a truly unique hook. Unfortunately, as a standalone title, this act just doesn’t work. It suffers from serious pacing issues and feels baffling and empty without the immediate context of its prologue. Double Fine let their financial needs get in the way of making the best possible user experience, and it ultimately tarnishes the whole game for those who played it in installments. Like Broken Sword 5, Broken Age will be a lot better for anyone who picks it up from now on, but that can’t save this episode from being heavily marked down.