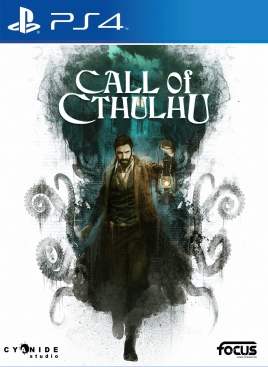 One of the perks of a job such as this is the opportunity to explore different genres and franchises outside of your comfort zone. Case in point, the world of Lovecraft. I know of it and its influences, but I have yet to truly experience any notable works involving it. Let alone the Call of Cthulhu tabletop RPG. But then a friend started talking about how they were highly anticipating the video game adaptation, and I was intrigued. Even moreso when this intrigue led me to learn more about the game. A mix of L.A. Noire’s detective work and SOMA’s horror from the depths and beyond? Sign me up! I could do with a good descent into madness!…Which, unfortunately, I didn’t get. No, Call of Cthulhu sadly ends up being less of a descent into madness and more into sheer mediocrity.

Set in 1924, the story involves private eye Edward Pierce, a WWI veteran desperately in need of a case. Luckily for him, he’s called to investigate the circumstances between the death of artist Sarah Hawkins and her family on the mysterious Darkwater Island. Unluckily for him, it appears Sarah specialized in painting certain horrors that were not meant to be seen. So now not only does Pierce have to solve the case through various investigations, he also has to deal with bizarre visions and voices that come from Sarah’s work, as well as a cult that demands it as well. Oh, and there’s the monstrous creature known as The Shambler that emerges from this. That may also impede things.

The investigation segments are the meat of Call of Cthulhu’s gameplay and rightfully so. Players begin by filling out Pierce’s character sheet, adding character points to one of seven areas that determine his abilities. These range from knowledge of the occult and psychology to even being able to spot hidden objects. How this affects things is that your skill level in one area determines what Pierce figures out. A low level of medicine means Pierce may just notice a bottle of pills. A high level means he can identify them and theorize how they fit into the current case. It seems like a simple touch, but it does contribute greatly to the level of immersion, really bringing out the role-playing elements. 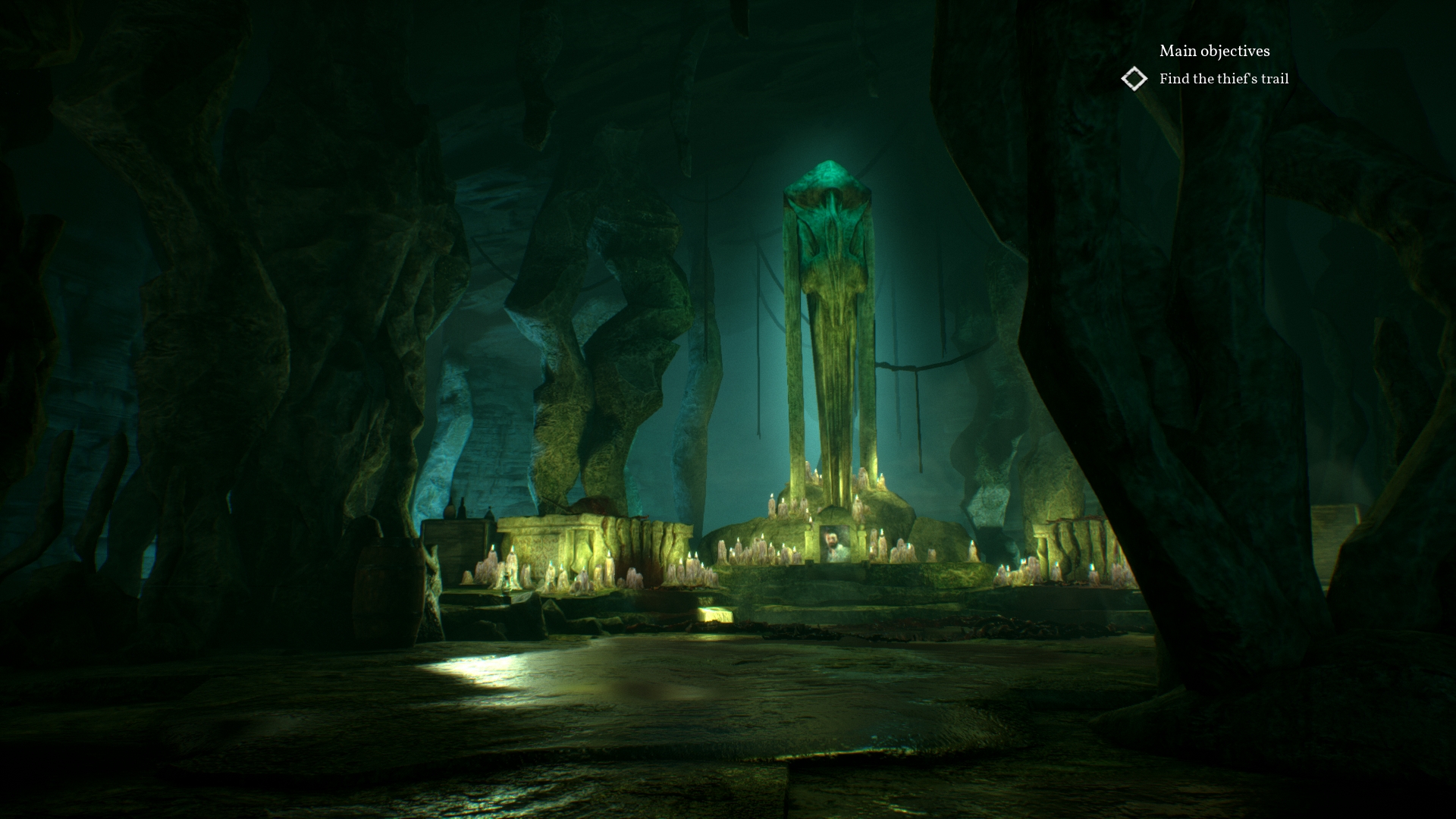 These investigation aspects naturally carry over to the dialogue as well. It’s simple Fallout-style skill checks, but it still works. It helps that the the story is mostly intriguing, so there’s interesting stuff to discuss. We also have reconstructions of crime scenes that utilize Pierce’s detective skills, walking around past moments and trying to successfully create an image of what went down. When mixed together, it all enhances the mystery, especially when it works with the murky, moody island of Darkwater, where green palettes dominate and you get the feeling that bizarre horrors are constantly watching you.

So the investigation aspects in Call of Cthulhu are well-crafted and fun. Of course, if you’ve read any of our previews, that doesn’t come as a shocker. You may have noticed, however, that in neither of those previews were we shown anything outside of the investigations. And about four chapters into the game, it became sadly obvious why this was.

After a few chapters of talking to people around town and investigating the crime scene, we follow a cultist down a hidden passage, which led to a rockslide that knocks Pierce out, which winds him up in an asylum where he’s held against his will until a female doctor lets us loose and encourages us to escape, and so TAH-DAAAHHHH!!! Forced stealth section time!! One where you can’t knock out any guards and immediately die if they catch you! And just to pile on the helplessness, the game discourages hiding because it creates claustrophobia, decreasing your sanity meter. It’s such a jarring shift in genres, moving straight into Outlast territory. It was the moment I sadly suspected that everything would be downhill from here. 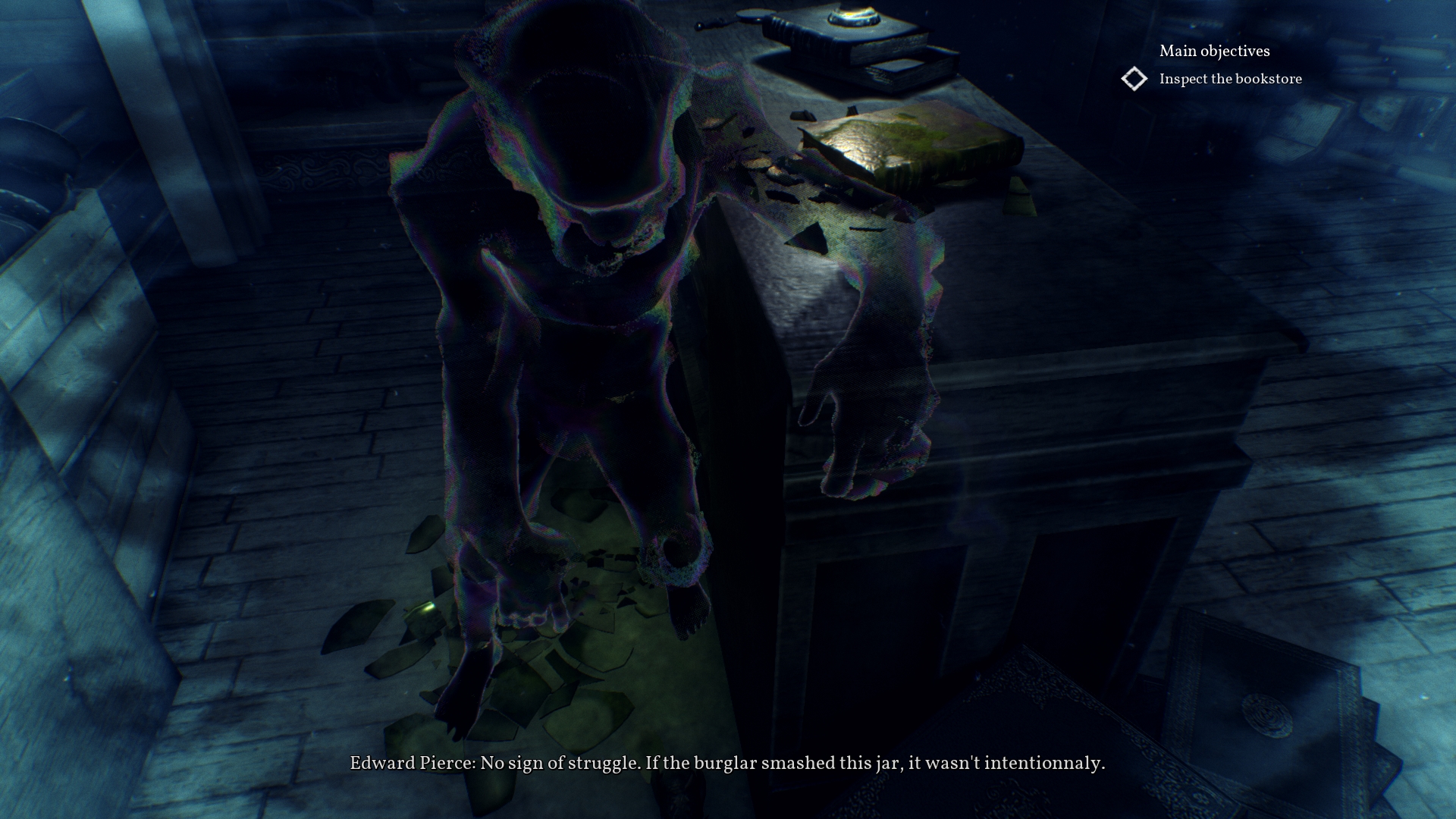 And indeed, things did go downhill. Just…not in the way that I expected. See, the L.A. Noire and SOMA comparisons earlier weren’t just random examples. Both of those games are great, but they suffer from the flaw of having amazing investigation and/or story elements that are connected by notably less exciting and innovative action segments. And I was afraid that these generic horror/stealth segments were similarly going to get in the way of things, especially since the first one dragged itself out by forcing Pierce to activate several levers and/or wheels to create a diversion. It just felt like turning things into a chore.

But…no. Call of Cthulhu only ended up having about two of these stealth segments overall. And the second one, while a bit annoying, was actually vastly shorter. Hell, it actually had a good puzzle about having to choose a correct dagger while avoiding the Shambler. But after that, things just sort of became a mixed jumble of gameplay elements. There was a maze-like section involving lantern illumination in a puzzle sequence. There was a more action-oriented sequence involving running away in a destroying building. Heck, there were straight-up walking simulator elements. In fact, this adaptation of the Call of Cthulhu RPG almost seems to dabble in every genre but RPGs.

The most baffling genre shift in Call of Cthulhu, comes in the form of the combat section. And by that I mean the lone, solitary combat section that occurs near the end. And hoo boy, this one was almost laughable. You’re given a gun, enemies walk around, and when an icon appears over their heads, you press a button, gun fires, they die. That’s it. No aiming, no reloading, no low ammo, no challenge. Judging by the fact that it’s the Strength icon that shows up, I suppose the logic is that if your Strength level is too low, gunshots aren’t effective and you have to rely more on stealth to maneuver around enemies. Except that wasn’t an issue either, because it was way too easy to craft a well-rounded set of skills, with room to even have some still maxed out. 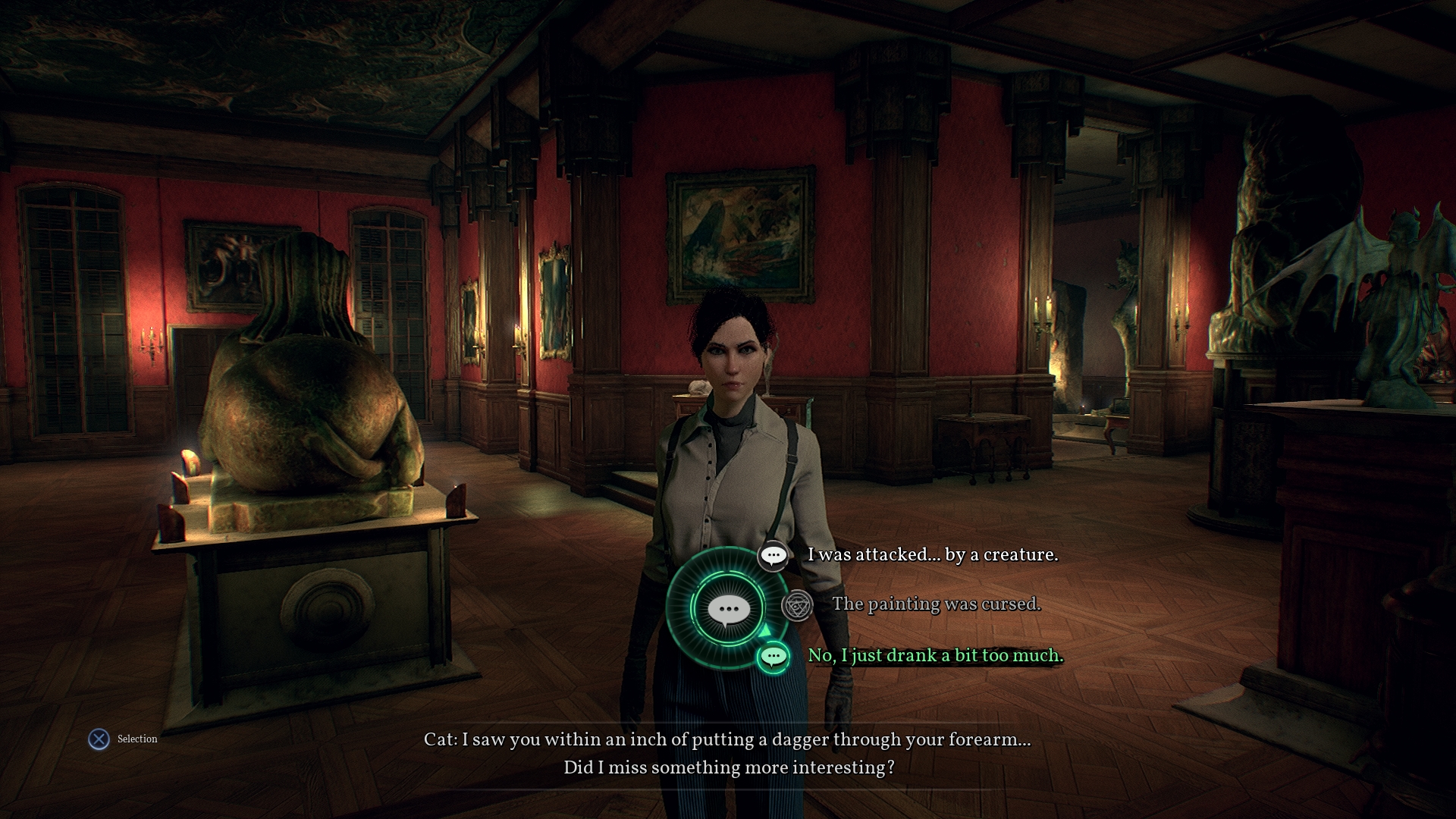 Yes, Call of Cthulhu stumbles in managing its RPG elements as well. While they’re still a great touch when it comes to investigations, a couple of factors work against them. One is the fact that the game never explains how you actually earn character points needed for leveling up skills. You just sort of instantly gain them at certain points while progressing through the story. The other notable factor working against things is the game’s length. I have no problem with shorter, twelve-to-fifteen-hour RPGs, but it feels like players were meant to carefully manage what skills to invest in over the course of a longer period, thus creating a challenge in presenting more multiple options that only those proficient in certain skills can choose. There just seem to be way too many points for a shorter period.

In fact, the game’s length in general ends up being one of its downfalls. Or rather, it does when it blends with the genre roulette on display. The entire last half of the game is where things bottom out as ideas pile up, and everything suffers, including the investigation sequences. Oh, those are still present, of course. But without spoiling things, players only undertake them when controlling three different characters (who can all analyze crime scenes despite not being detectives because…reasons). But they all have their own pre-set skills, Pierce’s don’t transfer over. No important choices to make, no real progress to make with Pierce’s development. They almost seem to be token at that point.

I could probably keep going about the wasted potential in Call of Cthulhu and how it relates to its brief length…and will. There’s the game’s sanity meter, which is meant to channel the likes of Eternal Darkness but ends up being a pale imitator. As brought up before, certain elements like hiding in small areas and viewing monsters cause Piece to develop psychological conditions that could hinder his behavior. Well, supposedly. Again, a lack of instances where these segments can come into play means this feature never develops. By the end, the game said Pierce was now psychotic, but damned if one could tell. 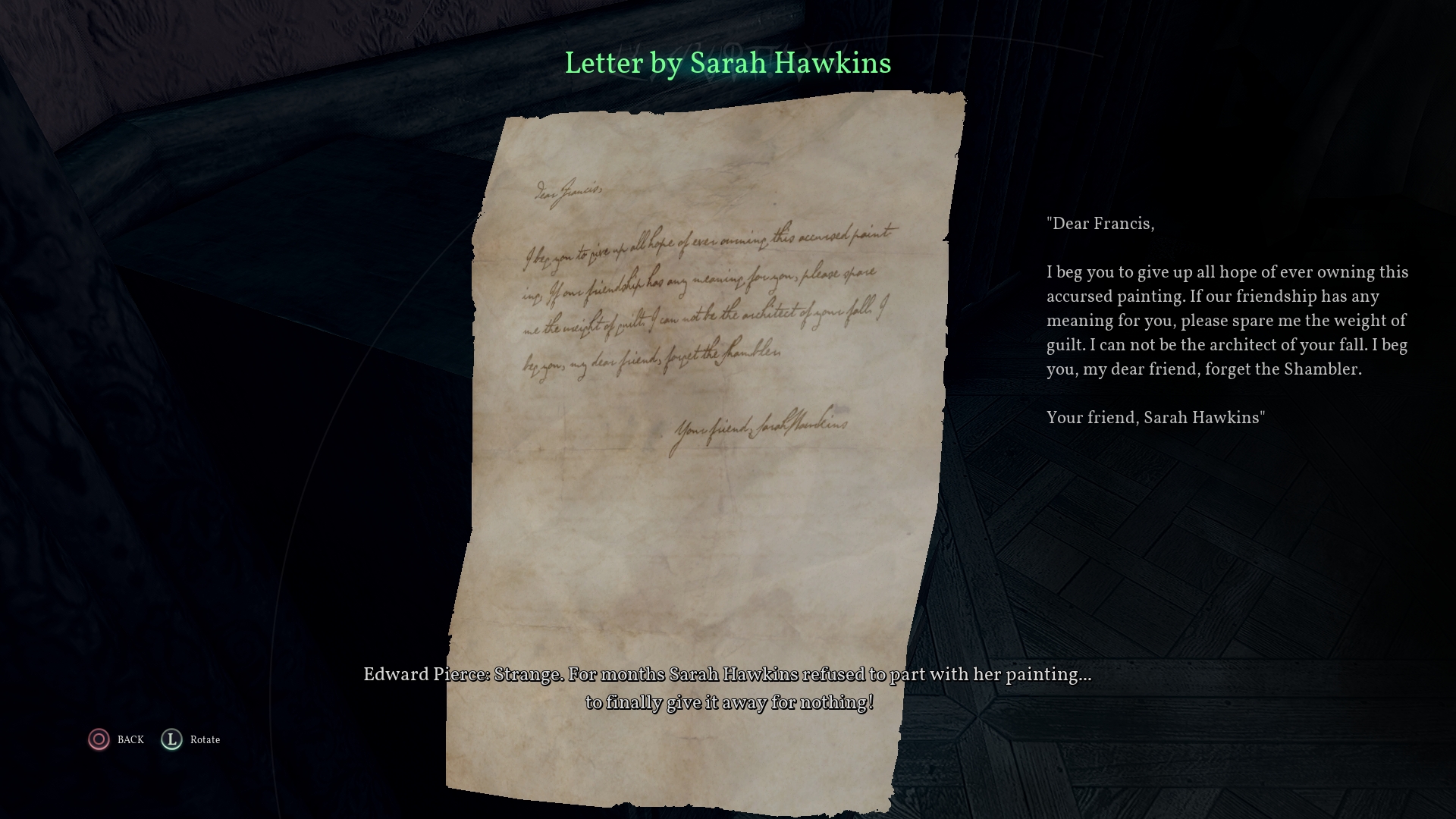 Even the narrative seems to get a bit sloppy in the later half. Given the setting and involvement of sanity, there are a couple of bizarre twists that appear. But there are the little things as well, like a character taunting Pierce over the fates of his war buddies. That might be intriguing, if it wasn’t for a complete lack of exploration into Pierce’s WWI past before that, so it appears out of nowhere. The branching narrative also leads to some points that don’t even seem to pay off. There’s one point near the end where you have to choose who receives a first aid kit: A major supporting character or someone last seen ten chapters ago that you’ve known for five minutes at best. Not exactly a major choice.

I should actually clarify something at this point, though. I’ve gone on rants about Call of Cthulhu’s various gameplay features, but none of them are outright bad on their own (well, except for the combat section). They still work perfectly fine, control nicely. No, it’s the assembly and structure of them that brings everything down. It’s your classic “jack of all trades, master of none” scenario too common in a lot of games these days. Call of Cthulhu, when you get right down to it, suffers from a lack of focus. Its multiple gameplay elements feel more appropriate for a longer, more sprawling epic. Or, better yet, it should borrow a page from The Council’s playbook, opting to be a full-on graphic adventure game focusing on the investigations and dialogue, but with RPG elements.

As one final note, I should mention a few graphical glitches as well. On several occasions, inventory items would have blatant pop-in on textures. Code would appear where prompts should be when examining items. First-person views when engaging in conversations would be off-center. None of these hiccups affect the gameplay, but they do get distracting. I’m also aware that due to the game’s branching nature and multiple paths/endings, there’s a chance things may have been different. Maybe there were better stealth options to be unlocked or more investigations. One could argue that you should play through a short game like this multiple times for the full experience. You know, uncover every path for the best stuff. But no. If they couldn’t get it right the first time, there’s no use in going back. 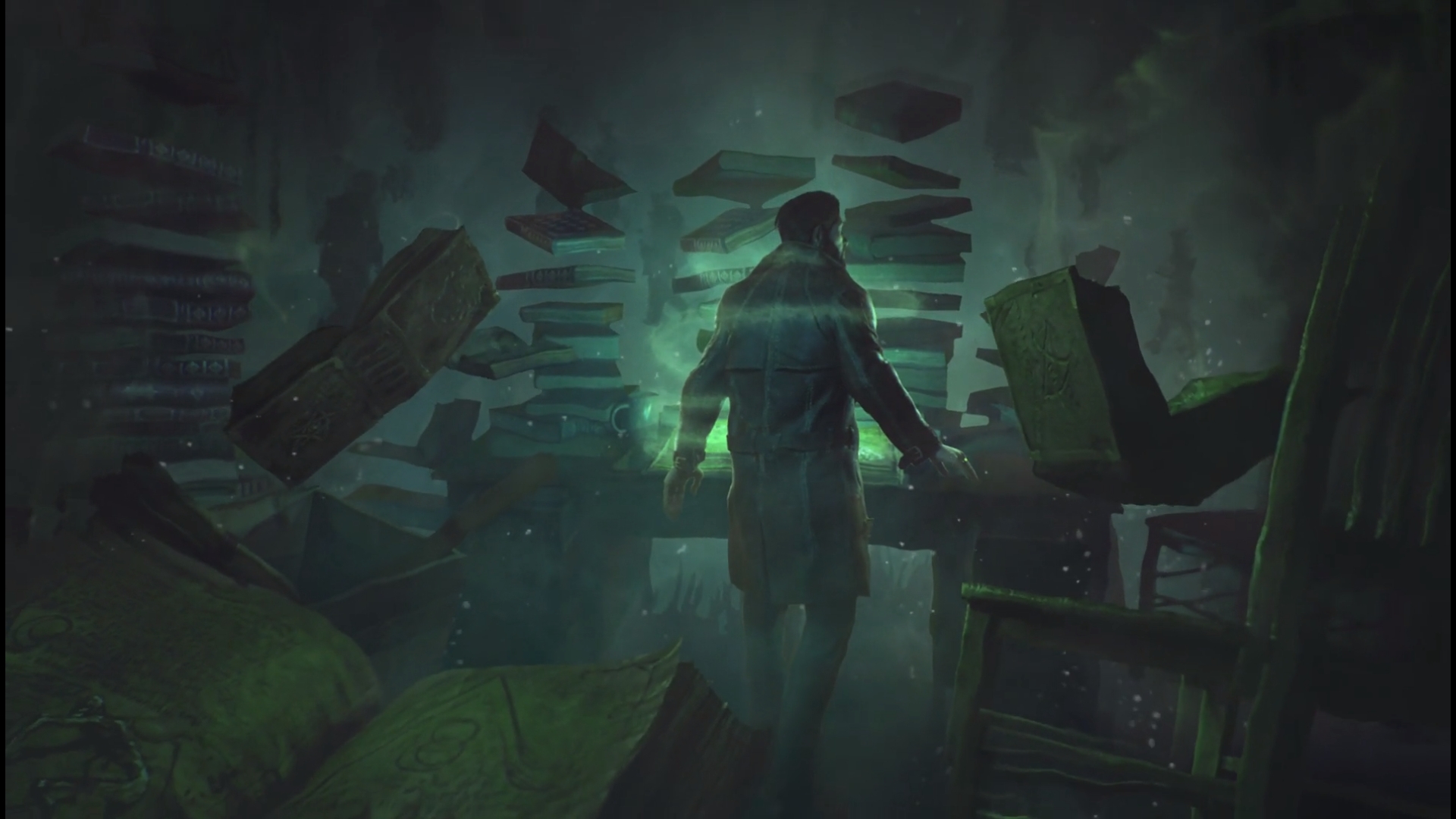 Simply put, Call of Cthulhu is a game of wasted potential. Its investigation system is fun, and something that could have easily carried the game on its own, working perfectly with the world of Lovecraft. And even any of the other gameplay elements could have made for a good adaptation. But when they mix together, the end result is a mediocre, cluttered mess that’s over too soon for anything to make an impact. Maybe hardcore fans of Lovecraft or the tabletop game can get some enjoyment out of things, but you’re better off waiting for The Sinking City instead.