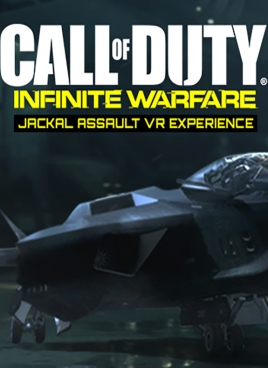 Call of Duty: Infinite Warfare is one of the holiday season’s biggest releases and we thoroughly enjoyed the main game. The announcement of the Jackal VR Experience was something that had gamers all over salivating. The concept of anything involving Call of Duty with VR has potential and the Jackal aircraft battle concept works quite well in the main game. In VR, it works even better. You’ll have orders barked at you and then you have to team up and battle hordes of enemies in order to ensure victory. This might sound like a Call of Duty-flavored EVE Valkyrie — and it’s not the worst comparison — but it does enough to help its experience stand out from that game.

Everything starts out easily enough with you just following your captain on a brief tutorial and then BOOM — a giant enemy craft appears and then tons of planes start flying out of it and you know it’s about to hit the fan. You’ve got a team on your side, but also your own large ship to protect and you’re learning things as you go. Unlike most games that just guide you through everything ad nauseam, you get a controller rundown and that’s it. Fortunately, that’s all you really need here. The pre-game controller rundown accomplishes the same basic thing, only now you’re using everything it mentions in real-time.

Moving with the left stick is easy and while other games have you aim completely with your own view, that is only used here to mark targets with rockets. You get a small supply of them — but that supply refills, so you don’t have to be paranoid about using them. Positioning plays a large part in success, and braking will allow you to aim far more accurately. If you wind up with a few enemies in a a cluster, your best bet is to always launch a couple of missiles and then spray in some fire. The missile will take out two of the enemies and the shots you’re raining down will take out the third enemy pretty quickly.With a headset on, moving your reticle with the right stick does seem a bit odd — but you do get used to it fairly quickly. 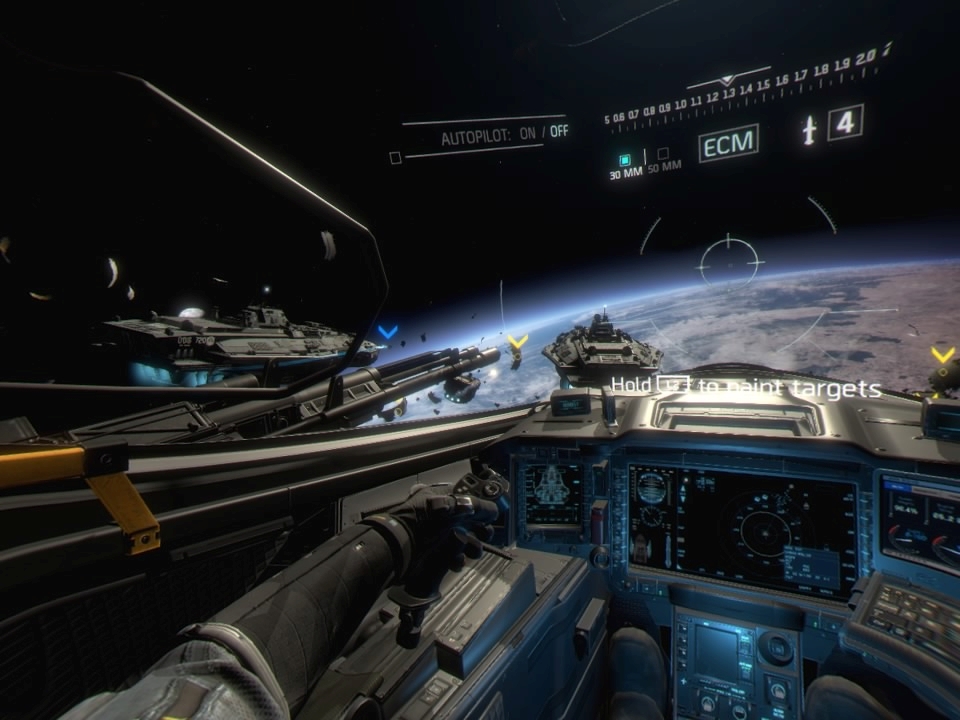 RIGS had a similar system, but you could also use your eyeline as your aim too. With how fast-paced this game is, keeping things a bit slower with the right stick movement is probably for the best. The enemies here do put up a bit of a fight, but you’re not looking at an all-out assault against you. It’s a very forgiving experience and one that is actually a better fit for VR newcomers than EVE Valkyrie because of that. The control scheme is about the same, and you won’t run into a problem forgetting what you’re doing mid-match — which is good because you don’t have the ability to readily look down and check the controller.

The Jackal Experience’s greatest strength lies in just how well-crafted every part of the experience is. From being jettisoned out of the larger craft to then facing the horde, you’re engaged in this battle. It’s a shame then that everything is over so quickly. A single runthrough is around five minutes and then you just repeat this same formula. This is a kiss of death, right? Well, not here. Much like arcade games of old where you would repeat the same thing over and over and do so because it was done well and you were out to beat your best score, you’ll want to keep replaying this to get better.

Every time you play, you wind up doing a bit of self-critique — and that’s quite rare in gaming now. Everything is so competitive that the idea of competing against yourself for a new high score is a bit foreign. After every play session, I found myself going, “okay, if I had approached this differently, or done this instead of that, I would have gotten a higher score”. Seeing just a single digit increase in your performance after changing one small thing feels great — and having it skyrocket up by five feels even better. You play not to prove you’re better than someone else — but to prove that you can get better and improve in real-time. The Jackal VR Experience is lean on content, but what’s here is outstanding. 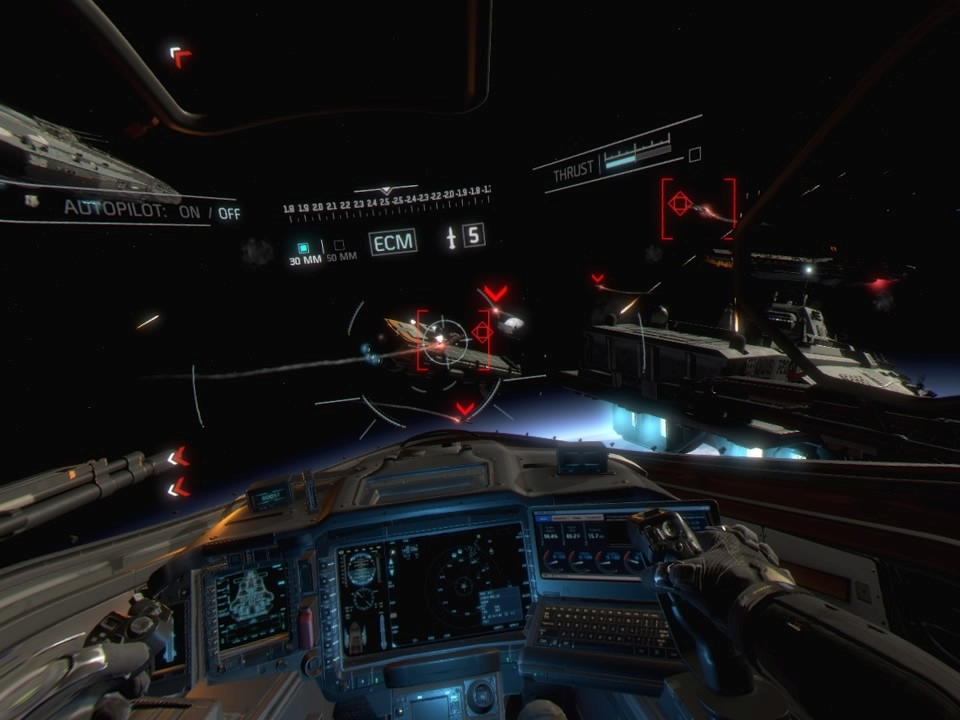 This multi-stage battle goes from dogfighting to a pseudo boss battle with a countdown clock of sorts as a gigantic laser is pointed at your main ship and that alone adds a sense of urgency. You’ve got five turrets to take out and then a larger one while also having to make sure you clear the craft of any smaller enemies and making sure you avoid the laser. Doing so properly results in a giant explosion and your team being overjoyed. You’ll see your final score and realize that you’re doing however well you’re doing — but you can always strive for more. You might see 20 on-screen and then aim for 25 the next time. Shoot for 30 if you want to. The addictive nature of the formula works quite well and it is a worthwhile experience. It’s kind of like comparing a high quality meal that has a small portion, but is gratifying instead of going with a gigantic fast food meal that might have more content in theory, but leaves you feeling far more empty because nothing in it is good.

Visually, Jackal Assault looks quite impressive. The pre-flight suit-up section features the usual low-res textures for your suit — but since you only see them for a few seconds, it’s no big deal. Using the sticks to move levers around remains fun to see and the core action is always fast with tons of things blowing up and some impressive effects work being done. EVE Valkyrie’s world is a bit more barren, while Jackal Assault features something that is visually impressive all around you. Textures on the enemy ships look fine and explosions are satisfying.

The sound design is strong and with headphones on, you’ll be able to tell where enemies are at just based on sound. This gives you a leg up and allows you to know when you need to slow down, speed up, or just focus on who’s in front of you because no one is beside you. There isn’t much in the way of music, but there is a ton of voice acting and it’s solid. None of it is going to win an award, but everyone plays their nameless roles quite well. The grunts sound happy when you win, and panic when they’re being shot at. Your captain is proud of you, and you can hear fear in her voice when the giant laser is being pointed at your squad. Everything about hte presentation is spot-on. 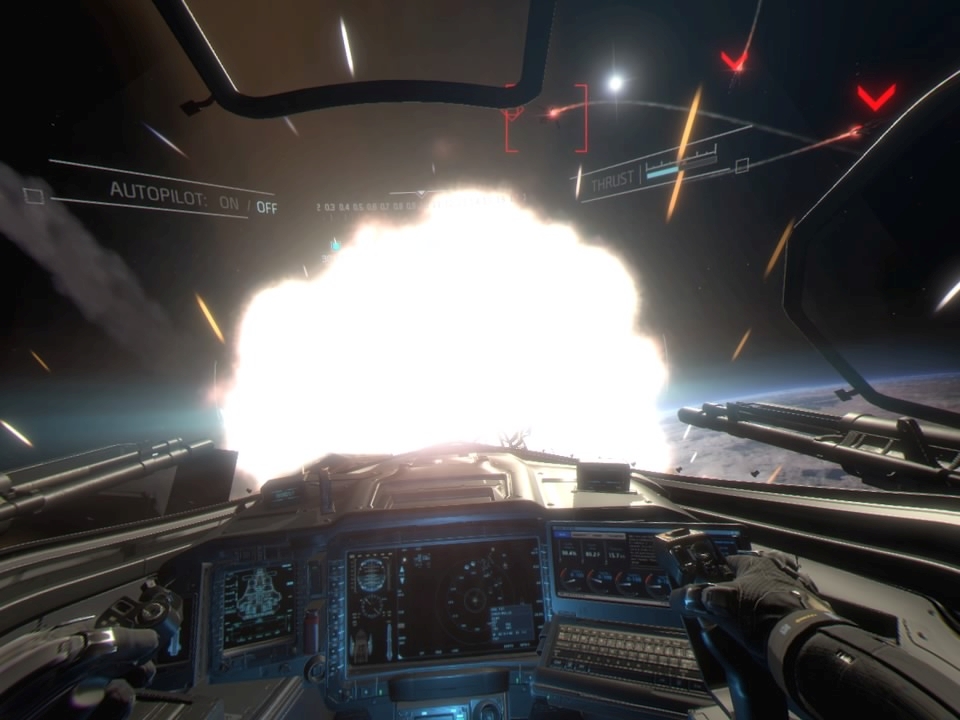 While Call Of Duty: Infinite Warfare Jackal Assault VR Experience is lean on content, everything presented in the package is outstanding. The core gameplay is well-crafted and easy to grasp even for those new to dogfighting games. With EVE Valkyrie on the platform, it would be easy to dismiss it — but the game is so good that you won’t be able to do that. Its addictive score attack nature makes you come back for more to try and simply reach new personal bests. This is a strong foundation for a side game if Activision chooses to make one, and hopefully that winds up happening because this is a stellar, but short, experience. It’s a wonderful showcase for the PlayStation VR and a fine foundation to build upon for a more fully-realized concept down the road.