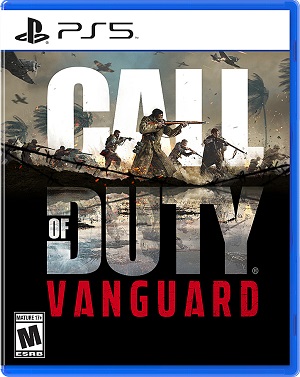 Call of Duty: Vanguard takes place at the tail-end of World War II, where the Allies discover a secretive plot by the Nazis dubbed Project Phoenix. Concerned, the Allies put together the first Special Forces squad comprised of soldiers from Great Britain, Soviet Russia, the United States and Australia to infiltrate Germany and uncover the project’s secrets. Unaccustomed to working as a cohesive unit, however, the squad is captured by the villainous Hermann Wenzel Freisinger for interrogation. Forced to relive their pasts, the team must hold on, find a way to work together and put an end to Project Phoenix.

Sledgehammer’s team showcases a lot of passion for World War II in its campaign and selection of characters. Sgt. Arthur Kingsley, Lt. Polina Petrova, Lt. 1st Class Wade Jackson, and Lt. Lucas Riggs and their battles are all based on real people and events. There’s undoubtedly good intention along with an interesting plot in Vanguard’s campaign; it’s just too unfocused for the short amount of time allotted to it. 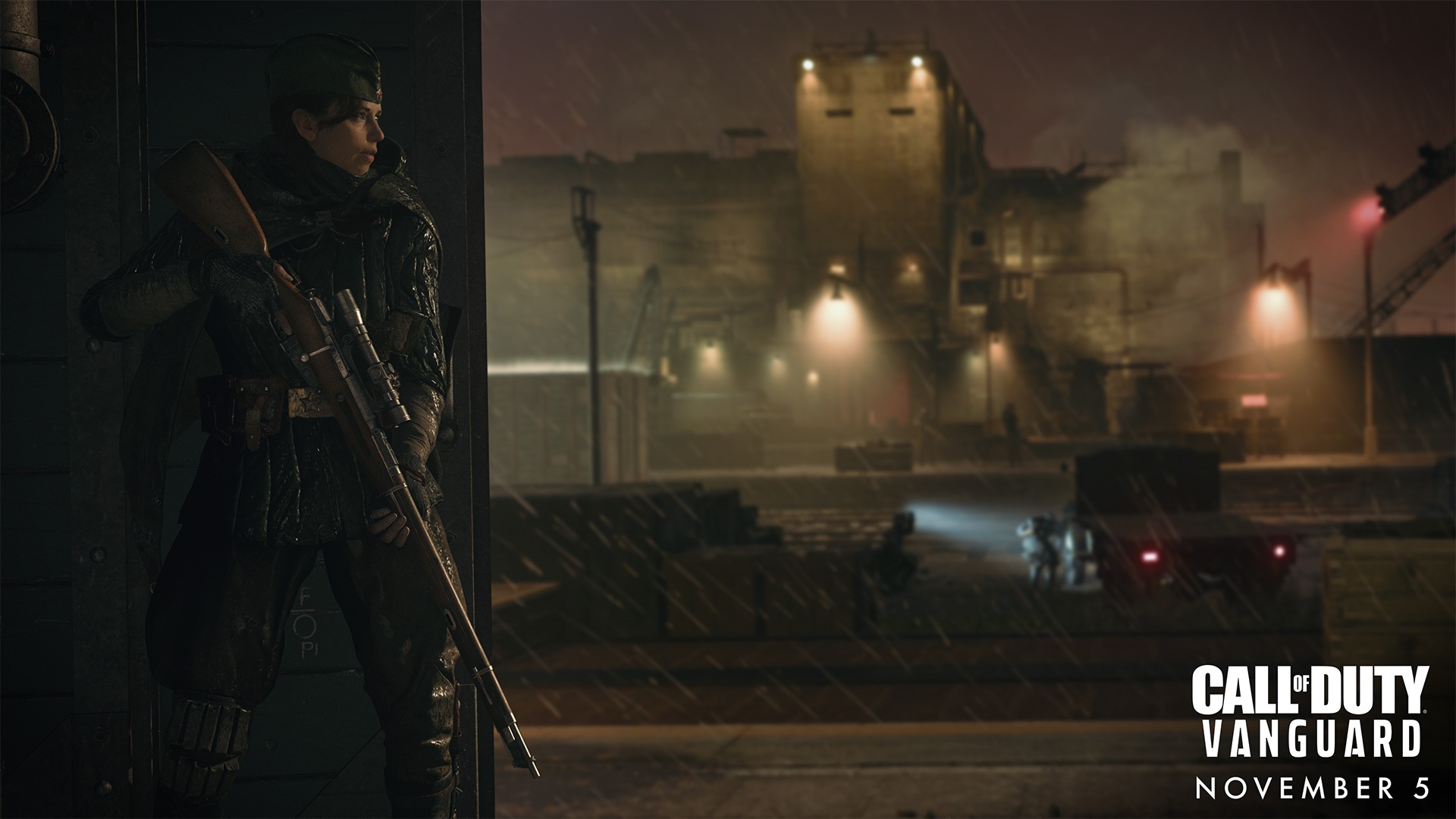 The campaign’s most significant flaw isn’t its scope, the developer’s passion for World War II or the interesting representation of history, but rather that it spreads itself too thin during its 4-5 hour runtime. The story tries to cover four different fronts of World War II while personifying four unique characters, but ultimately fails to make any fronts or characters compelling. Polina, Wade and Lucas only get two missions apiece before their tale in the war ends, and rather than watching the characters develop, we’re told through narration at the end of missions about how the events impacted them. Fascinating tales like how Polina earned the moniker Lady Nightingale are unfortunately absent.

It’s Kingsley and the antagonist Freisinger, however, that get it worst. Unlike the other playable characters, Kingsley and the Western Front only get one mission. Meanwhile, Freisinger is merely portrayed as a mustache-twirling villain with little nuance or intrigue. For as good as the performances are, Call of Duty: Vanguard’s characters never escape the stereotypes handed to them at the start of the campaign (i.e., angry Russian, cocky American, etc.).

As stated before, the campaign is split into two chapters per front except for the Western Front, which only gets one. For the most part, these are linear missions with a handful of larger areas that encourage more varied gameplay. While meticulously crafted, none of the levels truly capture the dangers or tone of their settings. For example, the game never creates a sense of dread while running through patches of grass on the Pacific Front like it did in Call of Duty: World at War. The Japanese infantry only uses tree snipers and hidden grass soldiers once in scripted moments, not as genuine threats players encounter throughout. Likewise, you never get a sense of brutality and growing need for revenge from the Russians as they push the Nazis from Stalingrad. 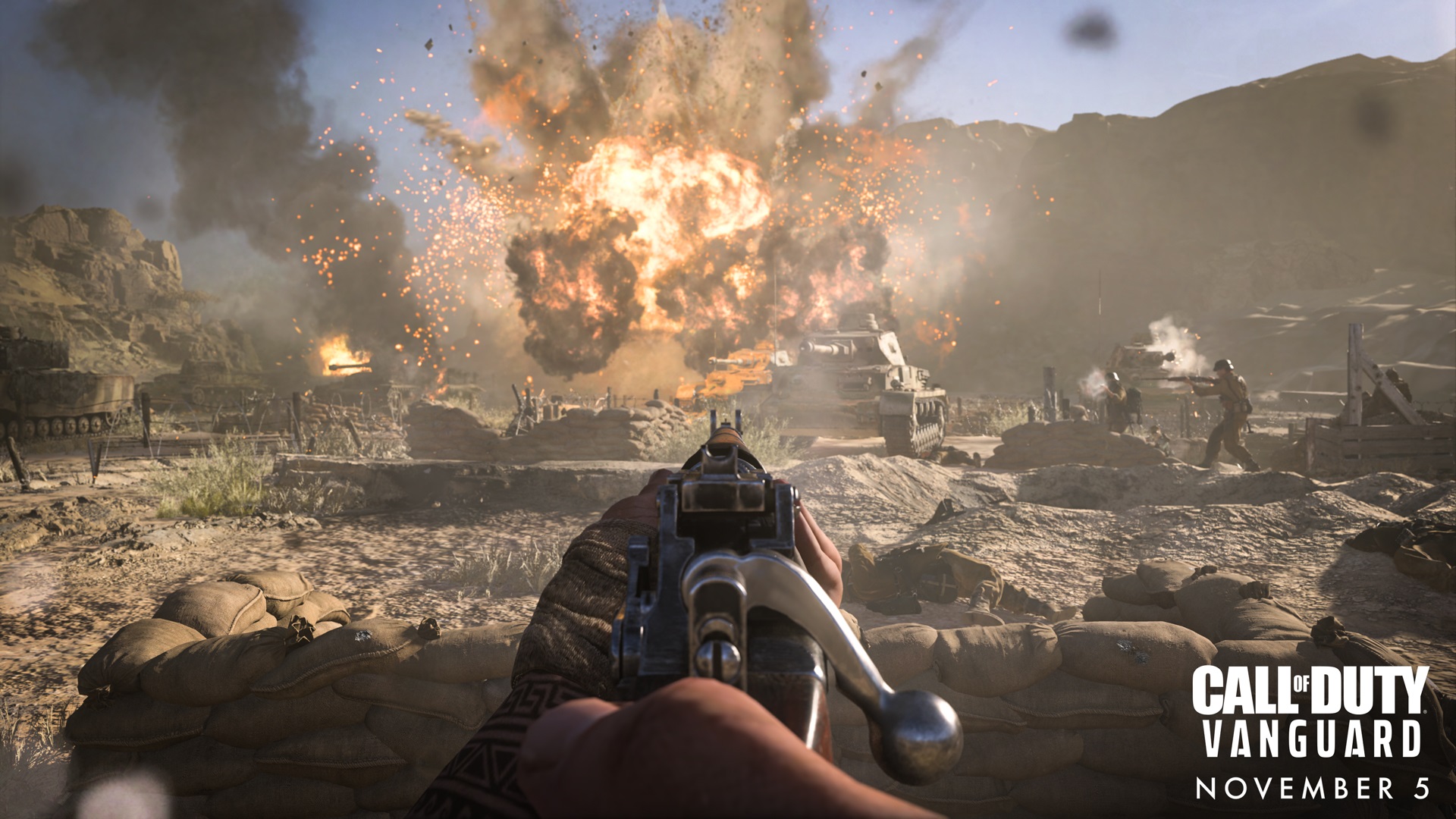 Call of Duty: Vanguard’s campaign is a victim of time. There are interesting characters, battles and locations throughout the 4-5 hours, but the story spreads itself too thin. If the game focused on a fewer selection of fronts and characters or devoted more time to the campaign for additional missions and story, Call of Duty: Vanguard could have had something special on its hands. As it stands, the campaign is underwhelming.

When it comes to gameplay, though, Call of Duty: Vanguard excels. The basic mechanics of Call of Duty remain the same. Vanguard is a first-person shooter through and through, checking all the basics one would expect from a Call of Duty game. The campaign gets additional wrinkles, with each character having unique abilities. Kingsley can order troops to suppress certain targets, Polina gets additional platforming options and can fit into tight spaces, Wade gets a wallhack that highlights enemies and allows him to snap to a target after killing the previous one automatically, and finally, Lucas can carry four different lethal grenades at one time. They’re neat abilities that work well in the campaign, but thankfully none of them make their way to multiplayer. 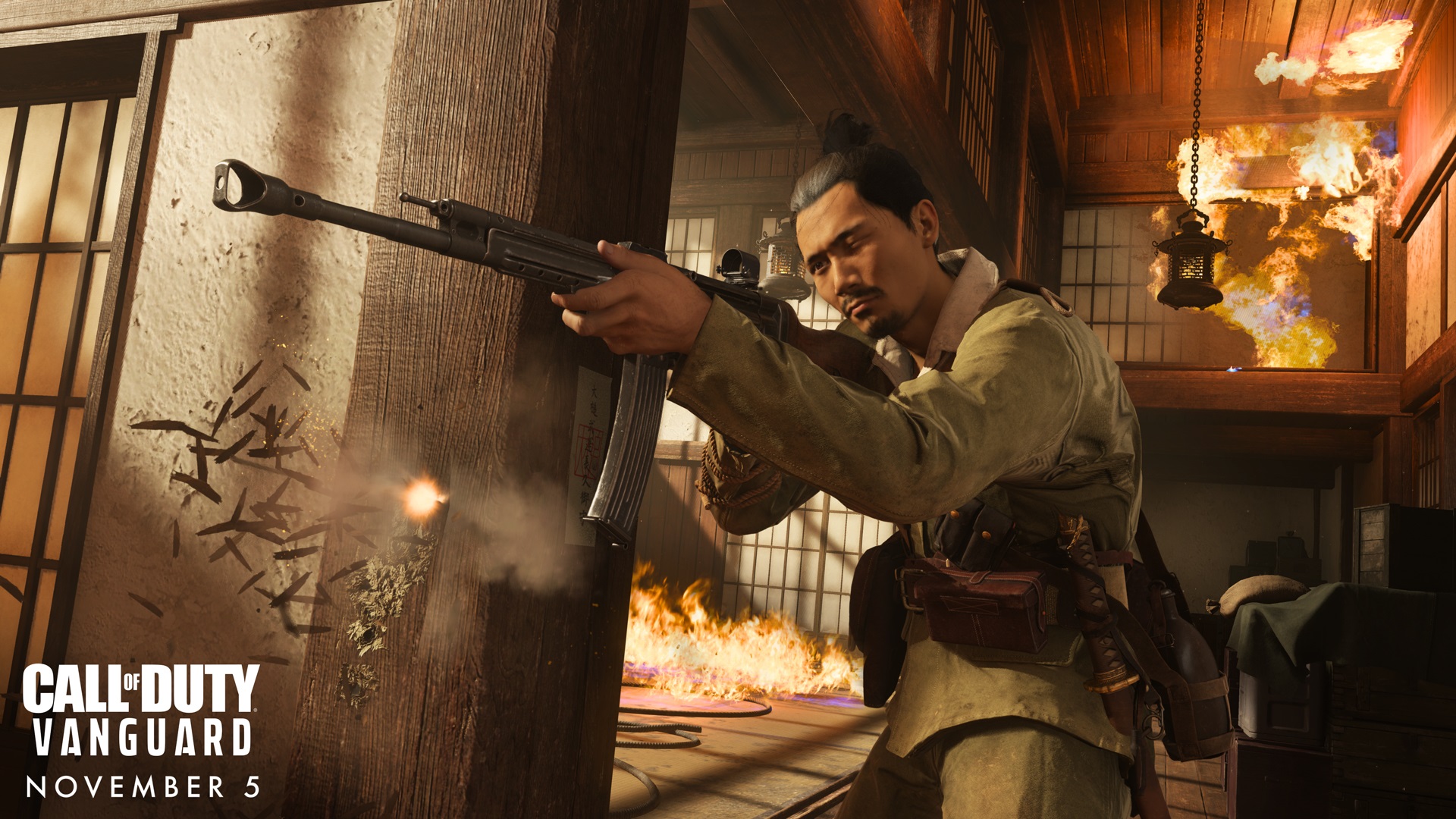 That gameplay bleeds directly into multiplayer, which for the first time in years, is content-rich. With over three dozen weapons, dozens more weapon attachments, Operators with unlockable skins from the get-go, and sixteen 6v6 maps, Call of Duty: Vanguard packs in the most launch content any Call of Duty title has seen in years. The best part is that the quality of the content is high. The variety of the maps is fantastic, pulling from all four fronts of the war. They’re all three-lane designs, but Sledgehammer has learned from WWII and built more visually interesting and engaging maps. Weapon and visibility balancing has also significantly improved from the beta, making for a much more playable multiplayer experience.

Call of Duty: Vanguard’s multiplayer doesn’t break the mold. This is a Call of Duty experience throughout, but there are a handful of new ideas in here. Patrol is a fun, chaotic take on Hardpoint, where the captured point roams around the map. Spawn points that were a mess in the beta have been cleaned up, though still not clean enough to prevent spawn killing. Likewise, destruction is available in most maps and allows players to create new sightlines and trash the interiors. It’s not game-changing, but it’s a neat little feature. What does alter multiplayer is the new Combat Pacing system, which adjusts player counts from 6v6 up to 24v24 on specific maps. In the final build, it’s a great and welcome addition for players who feel that particular maps are too big to facilitate exciting 6v6 matches. Spawns still need some tweaking, but Combat Pacing could quickly become Sledgehammer’s signature feature. The new Champion Hill mode doesn’t fare as well as it tries to bridge multiplayer and Battle Royale into a winner-take-all mode. It’s a neat idea, but it doesn’t successfully integrate either game mode enough to draw in fans of either mode. 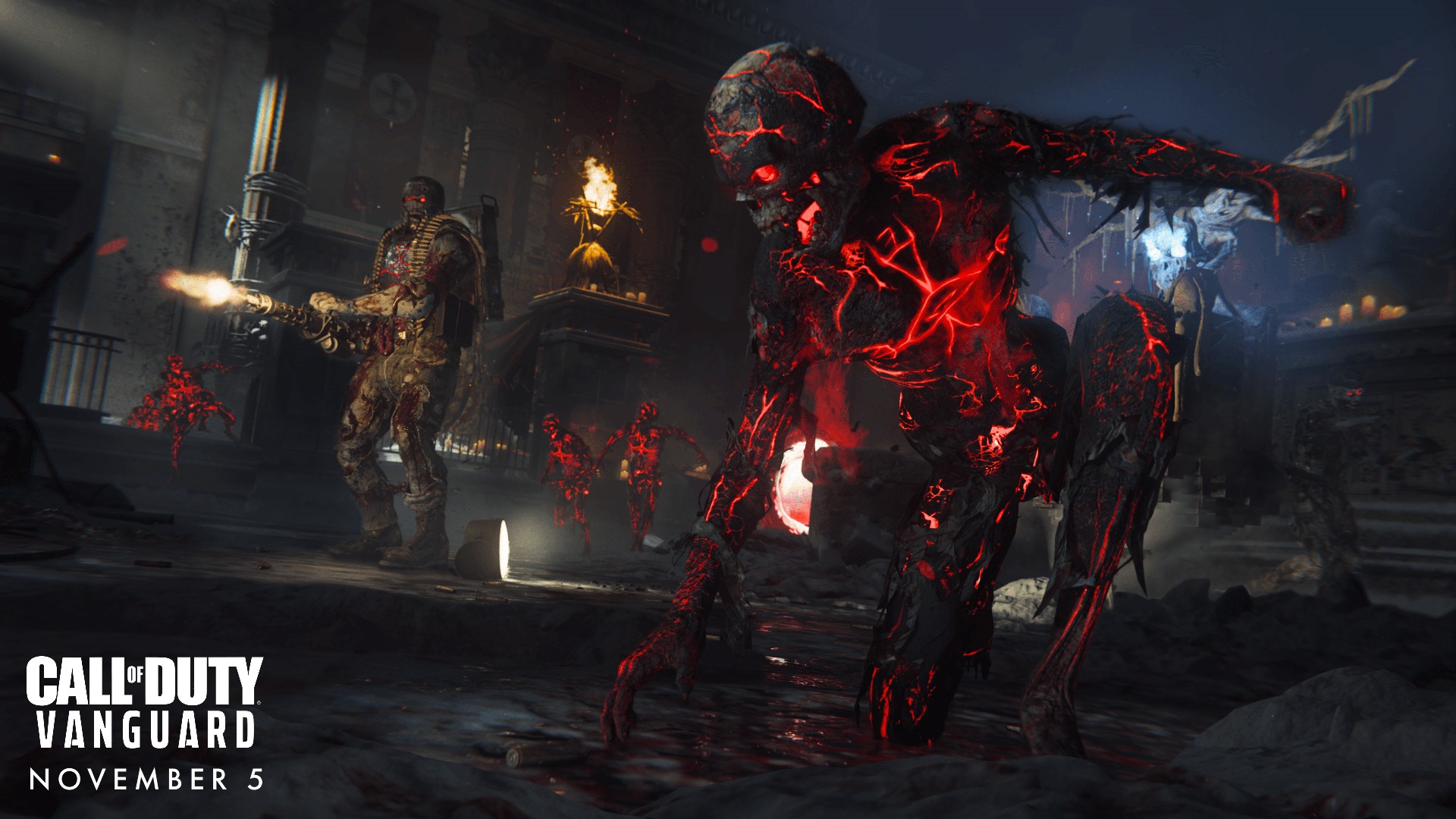 The last piece of the Vanguard experience is Zombies. After getting hammered for their take on Zombies in WWII, Sledgehammer enlisted the help of Treyarch in crafting the new Zombies experience, Der Anfang. A prequel to the Aether storyline in Black Ops Cold War, Der Anfang offers a fresh start for both the Zombies narrative and gameplay.

Der Anfang is a blend of Outbreak and traditional round-based Zombies. You’ll start in the hub world of Stalingrad and teleport to other locations to complete an objective. Once back in Stalingrad, more parts of the hub world open up and the world’s difficulty increases. Many of the familiar mechanics of previous Zombies modes are here, but with additional wrinkles. These include changes to Pack-a-Punch, perks and abilities that make them not as gameplay-changing as in previous titles. There are also new abilities called Covenants that bestow special perks like Brain Rot, which has the chance of turning a zombie into an ally.

Vanguard’s Zombies is best described as a back-to-basics affair. Many elements established in previous Black Ops titles are here, but others are missing. Customization is kept to a bare minimum, Easter Eggs aren’t present, there’s a lack of enemy variety and the story is kept to a minimum. Nevertheless, it’s a great starting point to ease in those intimidated by the daunting Zombies experiences of the past. This year, Der Anfang is a decent starting point for Zombies, though lacking coming off Cold War. 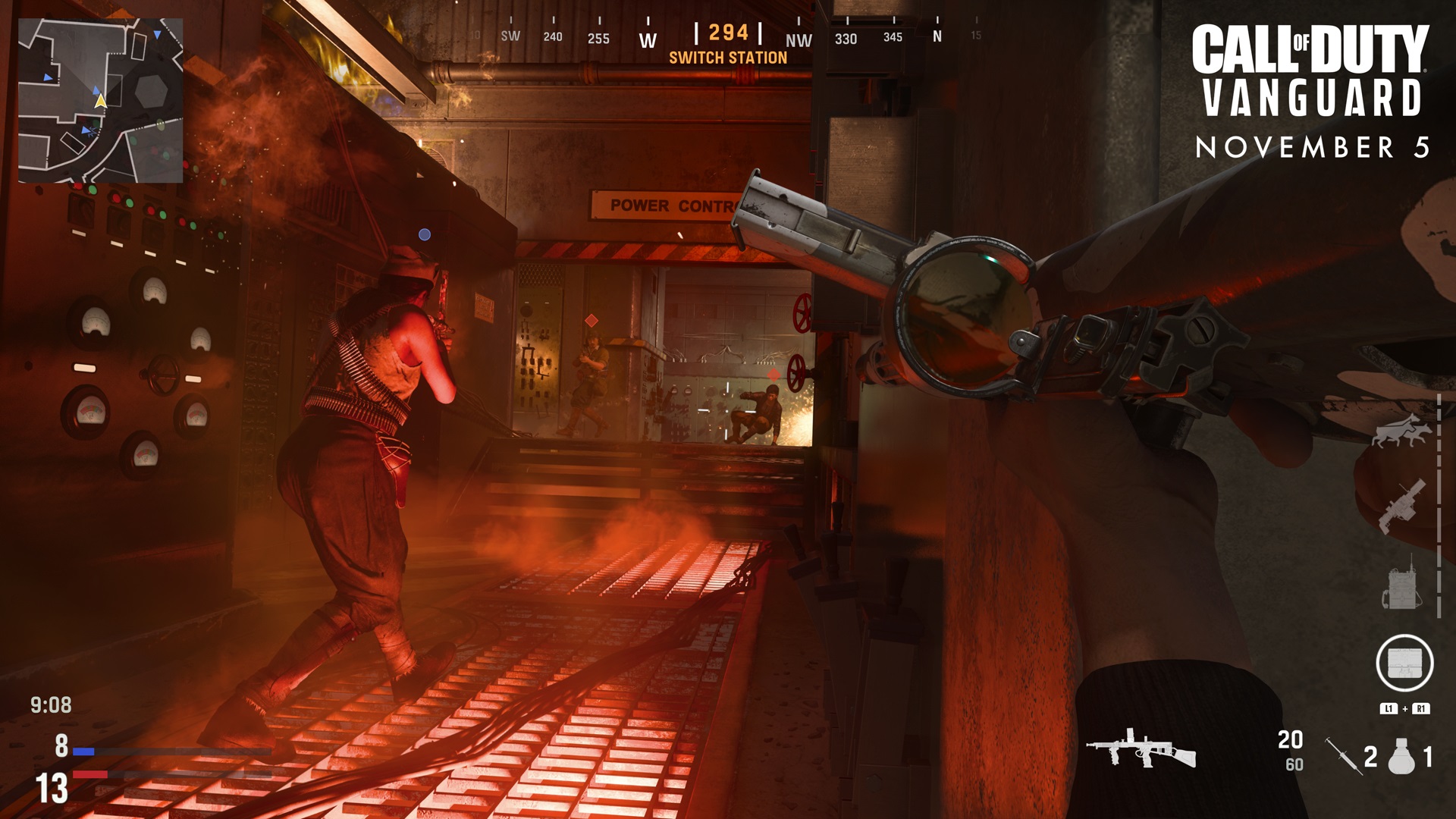 For Call of Duty: Vanguard, Sledgehammer Games uses a modified version of the Modern Warfare 2019 engine, and it shows. The presentation is stunning, particularly on the current generation of consoles. High-quality lighting effects, materials and weather permeate the whole experience. This is especially true of the campaign where rain and snow interact with characters and sunlight realistically filters through jungle trees. Even multiplayer, which scales back many graphical features, looks head-and-shoulders better than Modern Warfare 2019 and Black Ops Cold War. Meanwhile, Zombies not only looks great as well, but strong artistic direction gives the experience a dark and foreboding tone that works well with the World War II setting. Even without features like raytracing, Vanguard’s visuals are beautiful.

Call of Duty: Vanguard’s presentation is bolstered by a solid performance across all game modes. Like previous Call of Duty titles, the game delivers a solid 60fps experience with only a few issues during effects-heavy moments. The only major technical issue we’ve run into involves 2-3 second freezes in the campaign that desyncs the audio and visuals in cutscenes. Fixing it is as easy as restarting the checkpoint, but the fact it happened so many times was annoying. It’s an unfortunate ding in the otherwise beautiful presentation. 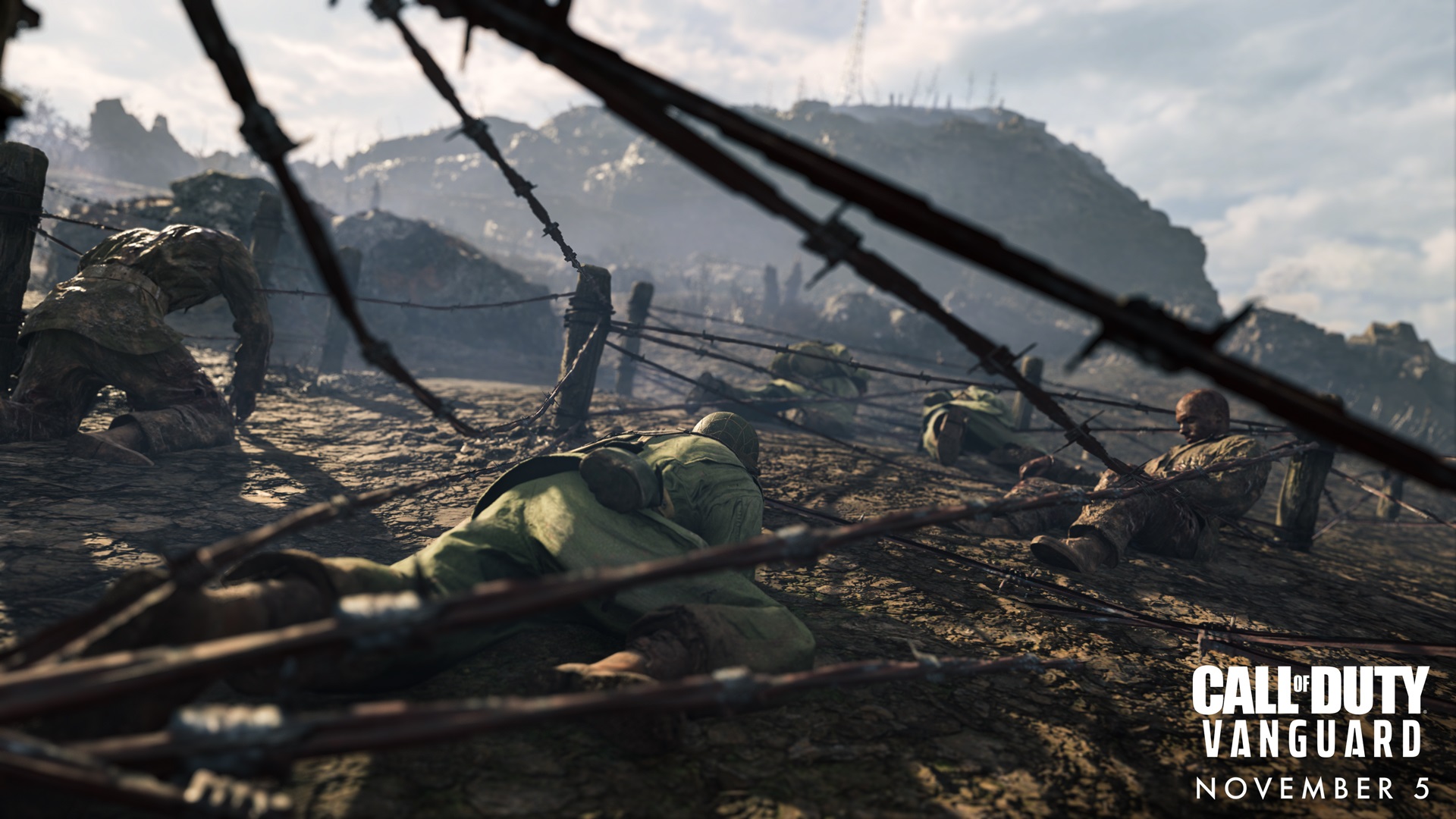 Sledgehammer Games clearly had high ambitions when approaching their third solo Call of Duty project. Doubling down on World War II was a smart idea to help the studio carve out its own identity separate from Infinity Ward and Treyarch. While Call of Duty: Vanguard doesn’t break the mold, it does succeed on most fronts, delivering one of the better multiplayer experiences in years for the franchise and a simplified Zombies mode that lowers the barrier of entry for those intimidated by past iterations. The amount of content available at launch combined with the lessons Sledgehammer learned from the beta and past titles has yielded a game that’s both engaging and fun to play. Shooting zombies remains a fun and enjoyable experience, and the added objectives give more purpose to the mayhem. It’s missing variety and features introduced in previous Zombies experiences, but Der Anfang is a decent starting point for this iteration of Zombies. Sadly, despite the campaign’s immense scope and grand ambitions, it’s brought crashing down to earth by a short runtime that doesn’t give each front or character the time they need to make an impression. There are interesting ideas and story beats, but they’re never given the necessary time and characterization to form a compelling campaign. Despite stumbling with the campaign, however, Call of Duty: Vanguard nails the Call of Duty experience everywhere else thanks to its stellar multiplayer and fun Zombies. Sledgehammer may have finally found their niche in the Call of Duty franchise.