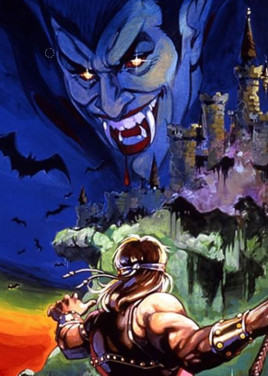 Castlevania is one of the longest-running video game franchises with beloved titles spanning several console generations. The popularity of one title in the series and the subsequent titles that followed its format even led to the subgenre term metroidvania. Prior to this, the series was known for being a more linear affair with a high level of difficulty. Castlevania Anniversary Collection looks back on the vampire killer’s roots, before large open ended maps and 3D worlds. This is a collection of eight titles from the 8-bit and 16-bit eras, proving that Dracula’s castle has always been a horrifying place.

Castlevania Anniversary Collection contains the NES trilogy Castlevania, Castlevania II: Simon’s Quest, Castlevania III: Dracula’s Curse, the Game Boy titles Castlevania: The Adventure, Castlevania II: Belmont’s Revenge, the SNES title Super Castlevania IV and Sega Genesis’s Castlevania Bloodlines. The one slightly out of place title is Kid Dracula, which was originally released in the States as a Game Boy title, but in this collection we are treated to the Japanese only NES/Famicon version. It has been announced that in a later update there will be some Japanese versions of some titles that will have some content differences due to the strict Nintendo of America policies at the time of the original releases.

In addition to the eight games, this collection includes a digital bonus book that has the box art from different versions and some other concept art work and history of the games. It’s interesting for fans and convenient to to have all the information available within the software, though a TV screen has never been the ideal way to read some of the lengthier text. This collection includes some modern touches but they are minimal and some design choices were questionable. I can only speak of the PlayStation 4 version but the button layout in questionable. On Super Castlevania IV and Castlevania: Bloodlines the X button is jump and Square is attack, and with these games the control input can be adjusted in the options menu. The other games control input cannot be customized, with X and Triangle attack and Square and Circle jump. Giving games with identical gameplay reversed action button input is baffling, kind of like how us old gamers can remember the confusion when a NES game had B jump and A attack. It would have been ideal to allow button customization, but failing that kept a uniform input configuration. 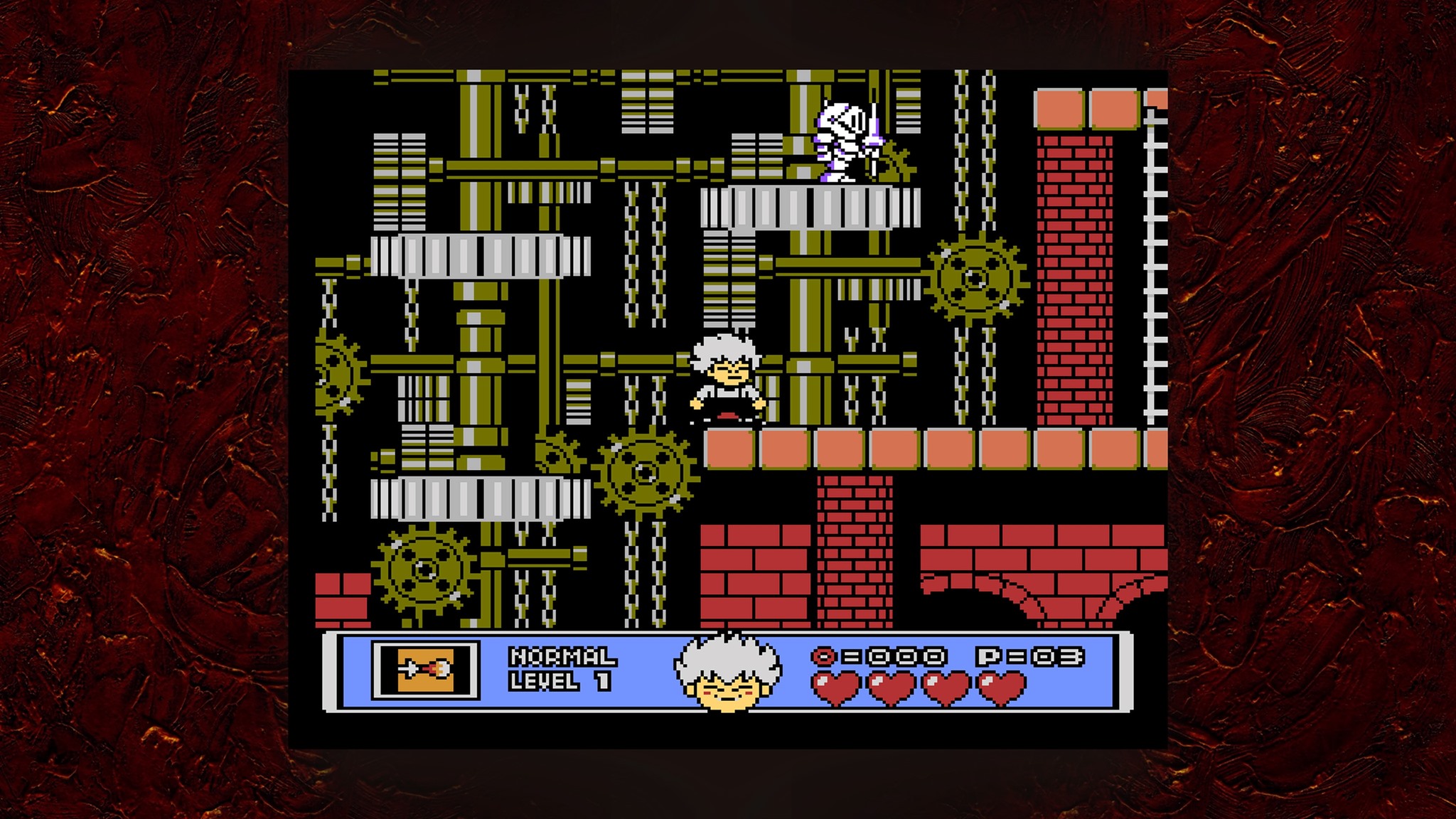 Some other modern conveniences include the option to have boarders on the screen or adjust the aspect ratio. Personal experience, the graphics look best in the Pixel Perfect option even though the screen is reduced to a small window on 16:9 aspect ratio TVs. Some other options include original 4:3, 16:9 stretch and variations of these ratios with retro scanlines. The Game Boy titles have various options for different monochromatic filters with or without scanlines. The player can save any of the games at any point, which is a relief for anyone who remembers when passwords were necessary for these games with the Castlevania II: Simon’s Quest passwords being particularly nightmarish. Now, I can’t speak for other consoles, but the way to access the option menu with these modern tweaks on PS4 is to hit the share button. So any time you want to save progress or adjust a display setting the game will pause and load up a screenshot to share, and once you cancel out of the screenshot sharing the menu will be accessible, which isn’t a deal breaker for this collection but an odd decision nonetheless. A more upsetting choice is there there can only be one save file per game, which can be problematic if multiple people use an account or if you’re trying to complete Castlevania III: Dracula’s Curse with each character in the most time efficient way possible.

The games contained in Castlevania Anniversary Collection are only lacking a couple titles which prevent it from being the complete collection of the 8-bit and 16-bit era of Castlevania, with several titles being seen on many best of lists for their respective consoles. These games are not the open ended metroidvania style that was introduced in Symphony of the Night and the following handheld games, but are much more linear and are where Castlevania got its reputation for having such unforgiving difficulty and its popularity. The emulation of each game is well done as the games play how I remember, though in some rare cases the NES experience was a little too authentically recreated with some game crashes, though during the review process this only occurred in the original Castlevania. To help inform our readers about this collection, here is a list of the included games with their original North American year of release. 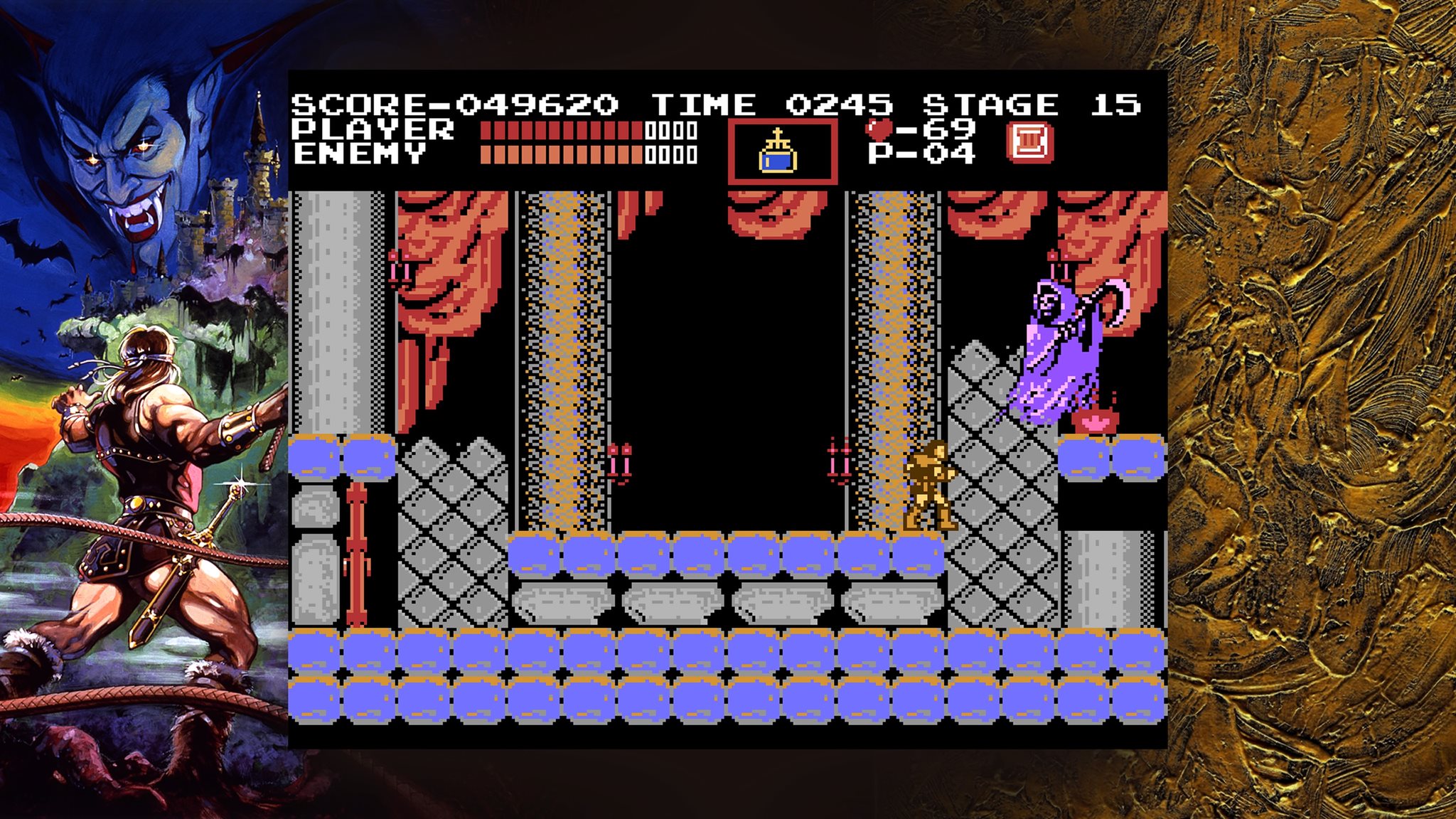 Castlevania (1987): The original title that introduced us to the Belmont clan. Set in the year 1691, players lead Simon Belmont through eighteen stages of Dracula’s castle, fighting famous and subsequently recurring iconic foes such as Frankenstein’s monster and the Grim Reaper. The game itself is short, but its difficulty will greatly extend the time it takes to see the fall of Dracula.

Castlevania II: Simon’s Quest (1988): This is possibly the most divisive title in the series and the exception to the earlier claim about games in this collection being linear. Taking place in 1698, Transylvania is cursed after Dracula’s defeat. Simon needs to collect Dracula’s scattered body parts to resurrect Dracula so that the curse may be broken by destroying him again. Abandoning the linear progressive of its predecessor, Simon’s Quest is an open world adventure where the execution falls short of its ambition. The main difficulty comes from counter intuitive solutions to puzzles and cryptic clues, which can be debated as being due to poor localization translation or deliberate attempts to mislead the player. It’s a game this reviewer has always had a soft spot for and it did lay the groundwork for the later nonlinear Castlevania titles, but this is best completed with some sort of guide.

Castlevania: The Adventure (1989): This is Castlevania’s first foray into the world of handheld platforms, and given how popular the franchise has been in that format, this is probably the weakest game in this collection. Taking place in 1576, players take on the role of Christopher Belmont in a simplified take on the format with no subweapons and a high difficulty. During the review the emulation quality was brought into question since the game feels like it is constantly dealing with minor slowdown, but further research indicated that is just how the game is. Worth checking out for fans if they want to experience all the classic titles, but this is nothing to write home about. I don’t think it’s possible to purchase it anywhere nowadays, but an improved colorized remake called Castlevania: The Adventure ReBirth was available as WiiWare once upon a time. 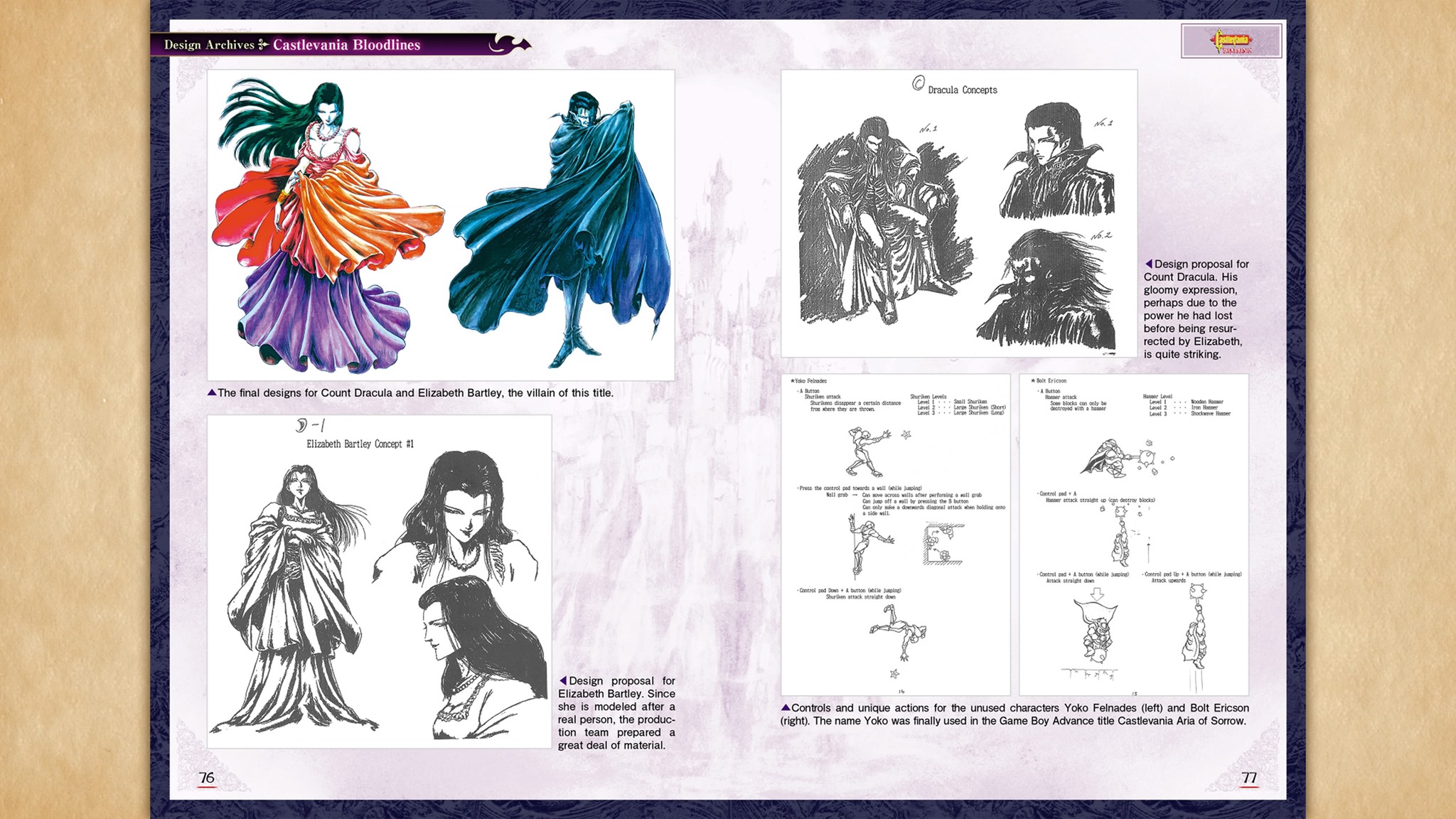 Castlevania III: Dracula’s Curse (1990): Set a century before the original Castlevania, players take control of Trevor Belmont. The gameplay has more in common with the first entry than the second, but there are branching paths in the linear level progression to Dracula. A noteworthy feature in this title is there are three additional characters that Trevor can meet and have accompany him on his quest. There is the pirate Grant Dynasty, who has the ability to climb walls. The spell throwing Sypha Belnades who can control fire, lightning and ice magic. And of course there is Alucard, son of Dracula who can consume hearts to change into a bat. The difficulty of this title almost makes the original seem easy, but the dev team showed some mercy and left in a ten life code in the form of entering HELP ME as the player name.

Castlevania II: Belmont’s Revenge (1991): If at first you don’t succeed try again was the attitude Konami took with bringing Castlevania to the handheld market. Taking place in 1591, players once again take on the role of Christopher Belmont dealing with Dracula who decided to wreck a family event and turn his son into a demon. This title is a massive improvement over its predecessor and arguably the best of the monochromatic handheld Castlevania trilogy. Castlevania II: Belmont’s Revenge is worthy of being played for its own merits.

Super Castlevania IV (1991): One of the initial SNES titles and remained one of its most iconic. The plot is essentially a retelling of the story of the original Castlevania, but this is a brand new game and in no way a remake. The graphic quality is leaps beyond what was shown in the NES title, which included such things as rotating backgrounds and spinning rooms, and for its time had some of the most impressive boss monsters around. Certain changes made this game easier than its predecessors, such as the ability to whip in eight directions and the ability to change jumping direction in midair, but even with these upgrades this trip to Dracula’s castle is no walk in the park. 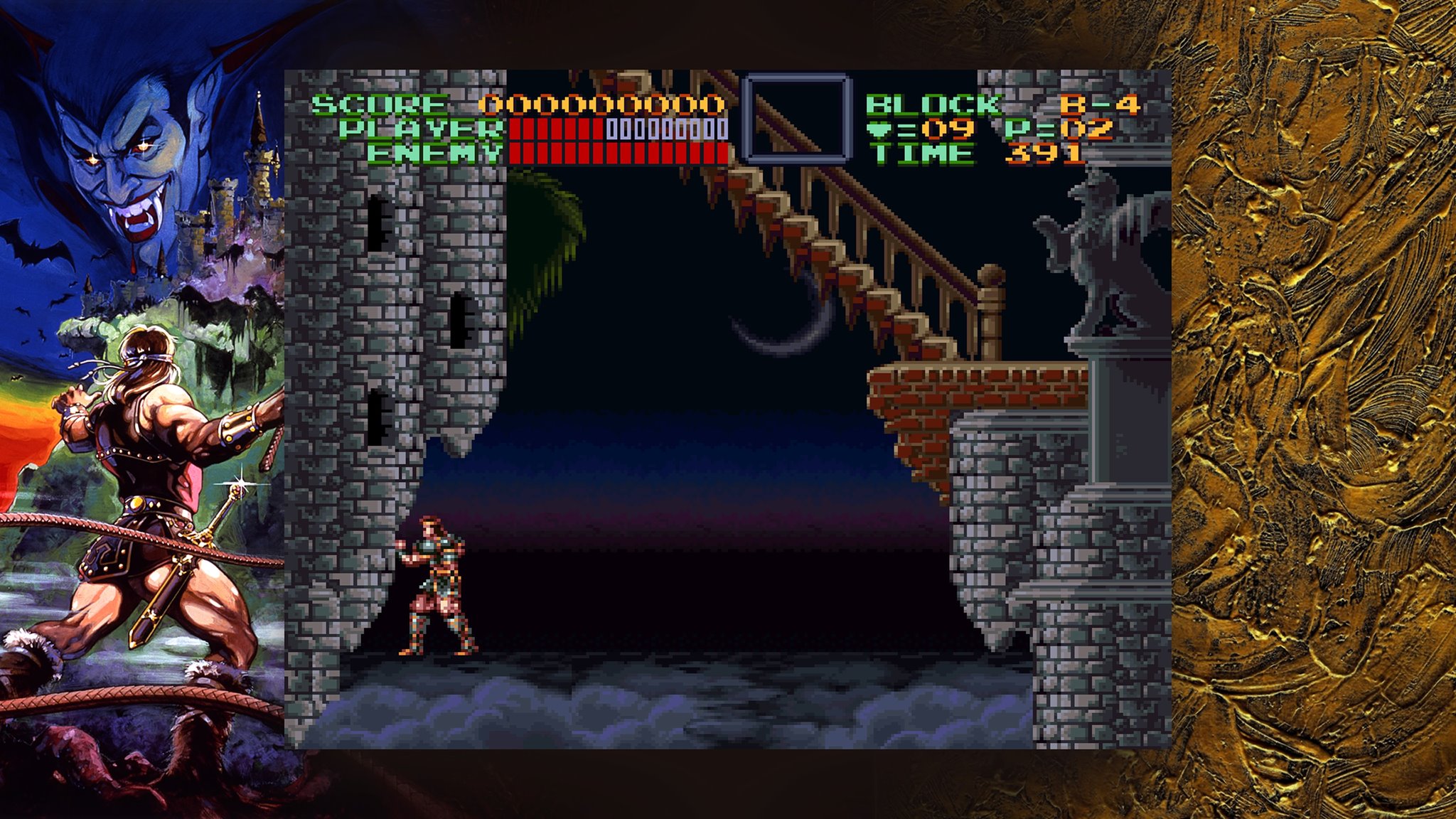 Kid Dracula (1993): Probably not title that immediately comes to mind when Castlevania comes up but it is connected to the same universe, which is much more obvious with the original Japanese title Akumajō Supesharu: Boku Dorakyura-kun which ties in to Akumajō Dracula, the original Japanese title for Castlevania. Players take control of Dracula, or at least a youthful and cartoonish version of him. This title seems more geared towards a younger audience, with more lighthearted and cutesy design choices for the characters, at least as cutesy as reanimated rotting corpses can be. There are stylistic similarities beyond the tonal shift, with environmental Castlevania assets making appearances and some major key renditions of some Castlevania riffs showing up in the soundtrack. It’s not quite the dark gothic horror the series is known for but a fun platformer nonetheless. Originally this game was only available on Game Boy in North America, but what we have here is an NES version that was previously only available in Japan.

Castlevania: Bloodlines (1994): Castlevania made its debut on the Sega Genesis late in the 16-bit era. This title was not originally released to a thunderous reception and is often overlooked when people discuss Castlevania titles, but this is actually pretty good. Taking place in 1917, players can choose between the whip cracking John Morris (descendant of Quincy Morris) or spear wielding Eric Lecarde. The plot ties Dracula’s resurrection to World War I due to some unholy ritual conducted by Elizabeth Bartley. This title has the player trekking across Europe, fighting the army of undead in a more industrialized setting than previous entries in the franchise. 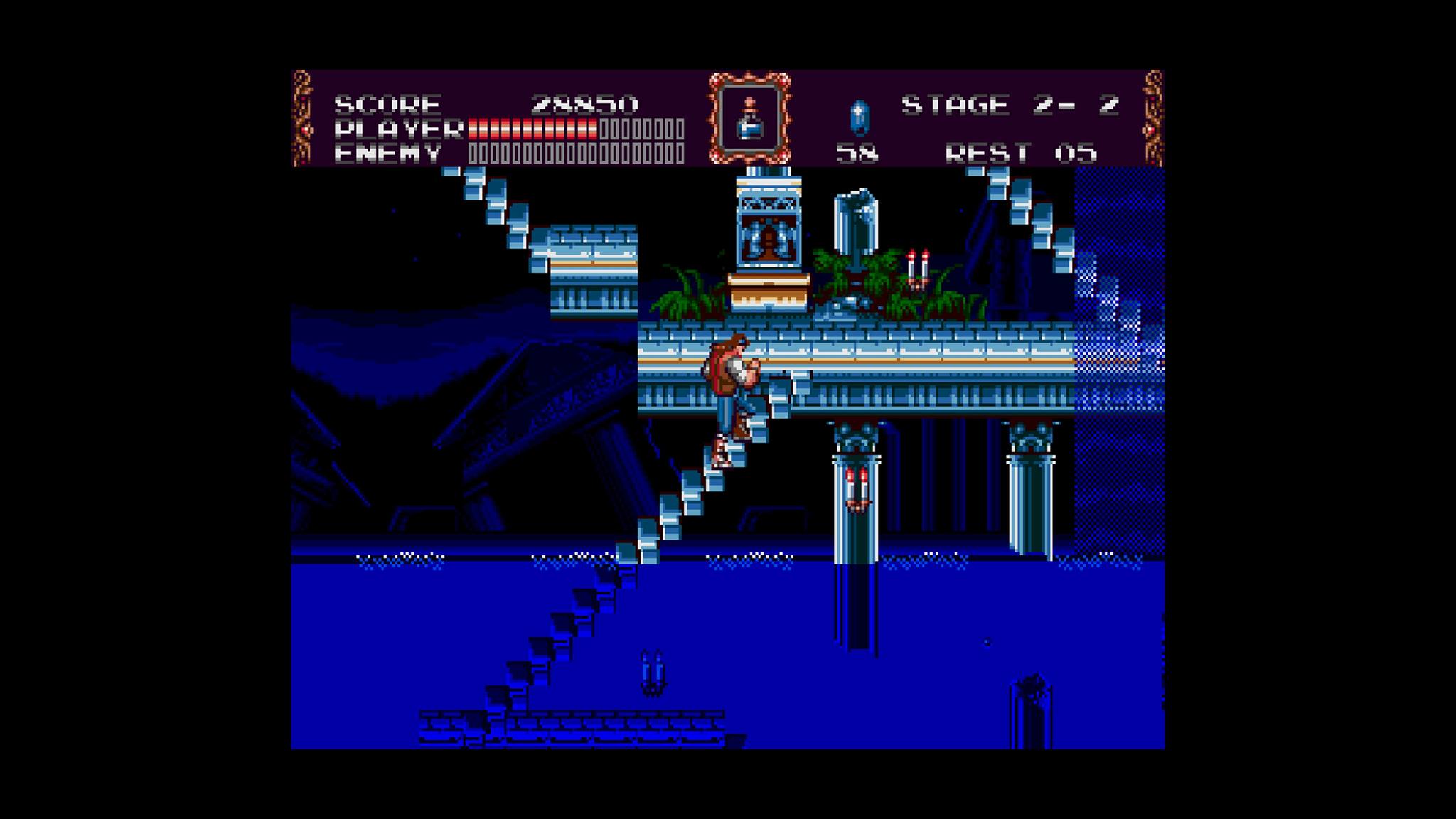 Castlevania Anniversary Collection contains the majority of classic Castlevania titles, some of which are considered among the best games for their respective consoles. The quality of games included speak for themselves and this really is a must own for any Castlevania fan or fan of retro action and platforming games. Now as for the actual collection as a whole, it seems that more care could have gone into it to make it more enticing since the youngest game in the collection is 25 years old. Some of the button mapping choices seem strange and control input customization should be an easy thing to include. The Bonus Book has some interesting stuff included, but some more extras would have been nice to help justify the purchase if you already have access to these games.