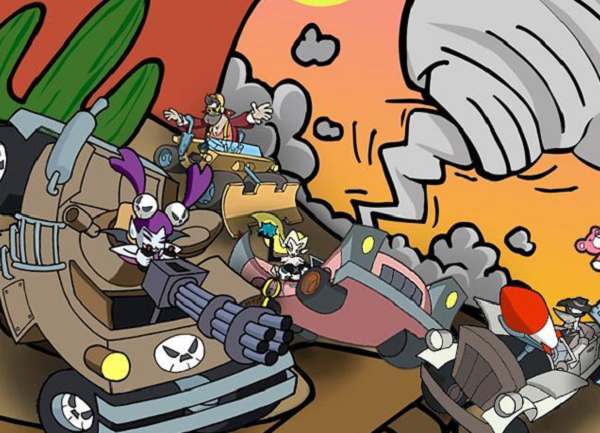 Cel Damage was a launch title for the original Xbox featuring cartoony characters driving cars, demolition derby style. I’m telling you this now because there’s a good chance that you didn’t play it. It didn’t really sell that well, nor did it do much for either critics or fans of the genre. On the list of games that needed an HD remake, Cel Damage was well outside of the top…say…1000. But tell that to Finish Line Games, who enthusiastically took on the challenge of giving this underrated launch game an HD upgrade for PS4, PS3 and Vita. Based on Cel Damage: Overdrive (an upgraded version of the game with multiple gameplay changes that was only released on PS2 in Europe), Cel Damage HD brings the underrated party game to PSN. It’s a flawed, but stylish game that isn’t going to set the world on fire, but could very well bring a spark to your next gaming party.

As an HD remake, Cel Damage HD’s most apparent upgrade is its visuals. The original game prided itself on cartoony, cel-shaded graphic design, giving it a very animated and wacky aesthetic. With HD polish, the graphics in Cel Damage HD still look sharp and clean. The in-game animations specifically are extremely smooth, moving at a strong clip without any frame rate drags. Some especially funny moments are when the game capitalizes on the cartoon style, like having your car turn into a scrap metal cube in a construction yard or hovering in the air for a second before falling off a cliff, Wile E. Coyote style. Character icons, weapon animations, and even environmental hazards move without a hitch. The maps themselves have similar themes (like space, deserts, or jungles), but a lot of the architecture is quite varied, like the difference between an alien moon and an orbital space station. The only part of the game that seems to show its visual age are the cutscenes, which look stiff and don’t emit as clean a shine as the in-game graphics. They’re definitely charming and have a ton of character, but the difference in quality between the cutscenes and the gameplay animations is extremely noticeable. Overall, though, the graphic design is very sharp, perfectly showing the same appeal you’d see from a Saturday morning cartoon.

Cel Damage’s gameplay follows the demolition-derby car combat you’d see in a game like Twisted Metal or Mario Kart 64’s Battle Mode. Much of the game uses the simple formula of blowing your opponents up in violent, but cartoony ways. You get a surprisingly large amount of weapons to use in each round (with the ability to customize which weapons appear). From miniguns to mortar rockets to giant baseball bats, there are a lot of ways to destroy your enemies on the battleground. However, each weapon comes in a certain type, like ranged or melee. Aside from that type, the weapons rarely offer too much difference from each other. For example, two melee weapons (say, the scimitar and the chainsaw) don’t offer too much of a difference, aside from a slight change in damage. But the biggest issue with the weapons is balancing. There are some weapons that are downright useless (like the mortar cannon, which is an absolute pain to target enemies with) and some that are just broken (melee weapons that attack anywhere around your car are very easy to abuse). While there are some standout items like the side-blasting cannon and the rapid-attack boxing gloves, a majority of the weapons are either overpowered or simply not much fun to use.

But controlling your car is an even weirder endeavor. You can drive your car simply enough with R2 to accelerate and L2 to brake (also used for drifting and powersliding). Shoot your weapons with the X button and turbo boost with square. But one big importance is stunting, which is used with the right analog stick. You can tilt the right analog stick either forward, to the side, or backward, allowing for one of three aerial maneuvers. Backward allows for a quick jump, side to dodge roll either left or right, and forward to frontflip, which also charges your turbo meter for boosting. It’s nothing too weird, but combined with the extremely floaty physics, things get pretty chaotic. Performing a frontflip off of something as simple as a sloped rock can cause your car to rocket to the sky. It’s certainly goofy and can be rather fun, but considering how small each arena is, it makes the battles feel claustrophobic and confined. It’s very easy to jettison from one edge of the map to the other, and while the game does an astonishingly good job of making sure your car lands on four wheels, the camera can be a real enemy when locked in a corner. Cel Damage HD has a very bizarre physics system, and to be fair, the floatiness of the cars adds a nice flow to the game. Still, the confined arenas tend to show the limitations of this fluidity, forcing this nice sense of freedom to the ground quickly.

Cel Damage HD doesn’t really have a story mode, though you can complete different stage challenges to unlock new characters, arenas, and weapons. Challenges come in three forms: Smack Attack, Flag Relay, and Gate Relay. Smack Attack is your typical car combat scenario: you earn points for attacking enemies and the first to get to a certain amount wins. It’s fun, but the issues with weapon balancing are readily apparent here. If you’re after victory, it’s advised to go right for a melee weapon, which has a much more assuring attack range. Flag Relay is the best mode: players must collect flags that are running around the map (yes, they have legs) and deliver them to a central hub to earn points. It’s essentially Capture the Flag, but with a great balance between the intense combat and the floaty physics, it makes for a fun time. Rounding out the three is Gate Relay, which is your typical race through checkpoints. Easily the worst of the three, Gate Relay is a boring mode that doesn’t offer too much of a reason to use weapons. Instead, it’s easier to simply stunt your way to turbo boosts and find shortcuts across the stage. It’s underwhelming and pales in comparison to more substantial racing games like Mario Kart Wii or Modnation Racers.

The single-player mode also suffers from some bad AI consistency. Sometimes they’ll wander around without a fight, next they’ll earn upwards to 75 Smack points in a few seconds. Aside from that, however, the lone wolves won’t find too much to go for after the main challenges, especially with no online multiplayer to speak of. Cel Damage HD is a multiplayer game and I mean that quite literally: the game demands to be played with multiple players in the same room. If you can get three of your friends on board, you’ll have a good amount of fun with Cel Damage HD. The game offers a nice amount of customization for modes, weapons and rules, so tweaking the settings to your liking is easy and offers a nice bit of variety. The level maps also have some excellent use of environmental hazards, which make the multiplayer a bit more unpredictable. Cel Damage HD is relatively easy to beat and doesn’t offer much beyond that for single players, but if you’re looking for a multiplayer game with a solid amount of style, Cel Damage HD delivers.

For an HD remake that no one asked for of a game that few people played, Cel Damage HD is actually pretty charming and entertaining. It’s a classic party multiplayer game at its heart and doesn’t do too much to cater to anyone else. No online play and a very short single-player mode might scare away the lone wolves, but it’s a very solid example of the perseverance of local multiplayer. The wacky animations are complemented by the HD polish, oozing character and charm. The physics are loose and forgiving, even under the confinements of the small arenas, offering lots of mobility across multiple kinds of maps. The weapons suffer a lot from balancing issues and the three kinds of modes aren’t all fun, but Cel Damage HD still has a warped, goofy appeal. It’s by no means the best HD remake or car combat game, but for what it is, Cel Damage HD can keep your attention for a while, especially if you’re throwing a party. Like a Saturday morning cartoon, Cel Damage HD isn’t meant to teach or advance anything, but when it comes to dumb, senseless fun, it’s easy to think of many worse options.