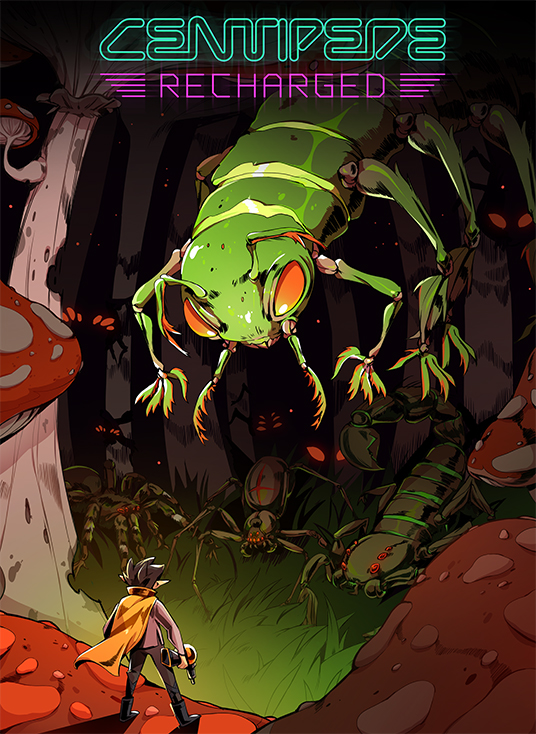 Back in the days of the ’80s arcade Centipede was one of the old reliables.  You could basically guarantee that a Centipede machine would be in there somewhere, maybe not drawing the same size pile of quarters as Pac-Man but doing enough to justify the floor space. Centipede‘s sequel Millipede didn’t do as well, despite being a worthy followup that added new gameplay upgrades and enemies, and after that the series went dark.  The 1998 remake was adequate, which was nowhere near enough to revitalize one of the arcade’s defining games, and after that you were as likely to find another entry in the Centipede series as you were a Crystal Castles 2.

Over the last couple decades the video game market has gone through welcome changes, finally figuring out what it wants to be, and as it turns out that’s pretty much anything and everything.  It doesn’t matter the genre, whether that be point & click adventure, puzzles in all shapes and sizes, giant open-world quests, tightly-focused personal stories, and of course pure arcade action.  There’s room for everything, which is a great reason to dust off old classic licenses and see what they’d look like filtered through today’s computational power.  Centipede: Recharged is a proper entry in the classic series, redefining the game from its quarter-eating days as something more approachable while paying proper tribute to its arcade roots.

Like the original Centipede, Centipede: Recharged is a single-button affair.  I played the PC version so was disappointed to find I couldn’t use my trackball on it, but otherwise it’s stick for movement, button to fire, and that’s everything.  The graphics have changed from sprites to vector-style, all the better to shatter into glowing lines when destroyed, but everything is recognizable from the original game.  The centipede streams in from the top of the screen, moving left to right and dropping a row closer to the bottom every time it hits a mushroom.  Shooting any part of the centipede turns that segment into a mushroom, but while hitting the head just shortens the bug, nailing a center piece divides it in half.  Fleas drop straight down from the top of the screen every now and then, leaving trails of mushrooms behind, and scorpions move across poisoning any mushroom they touch.  If a centipede hits a poison mushroom it dives straight for the bottom of the screen, which is either a problem or an opportunity depending on how ready you are to deal with it.  All four enemies from the original game are back, but it’s the spiders that got the major gameplay tweak. 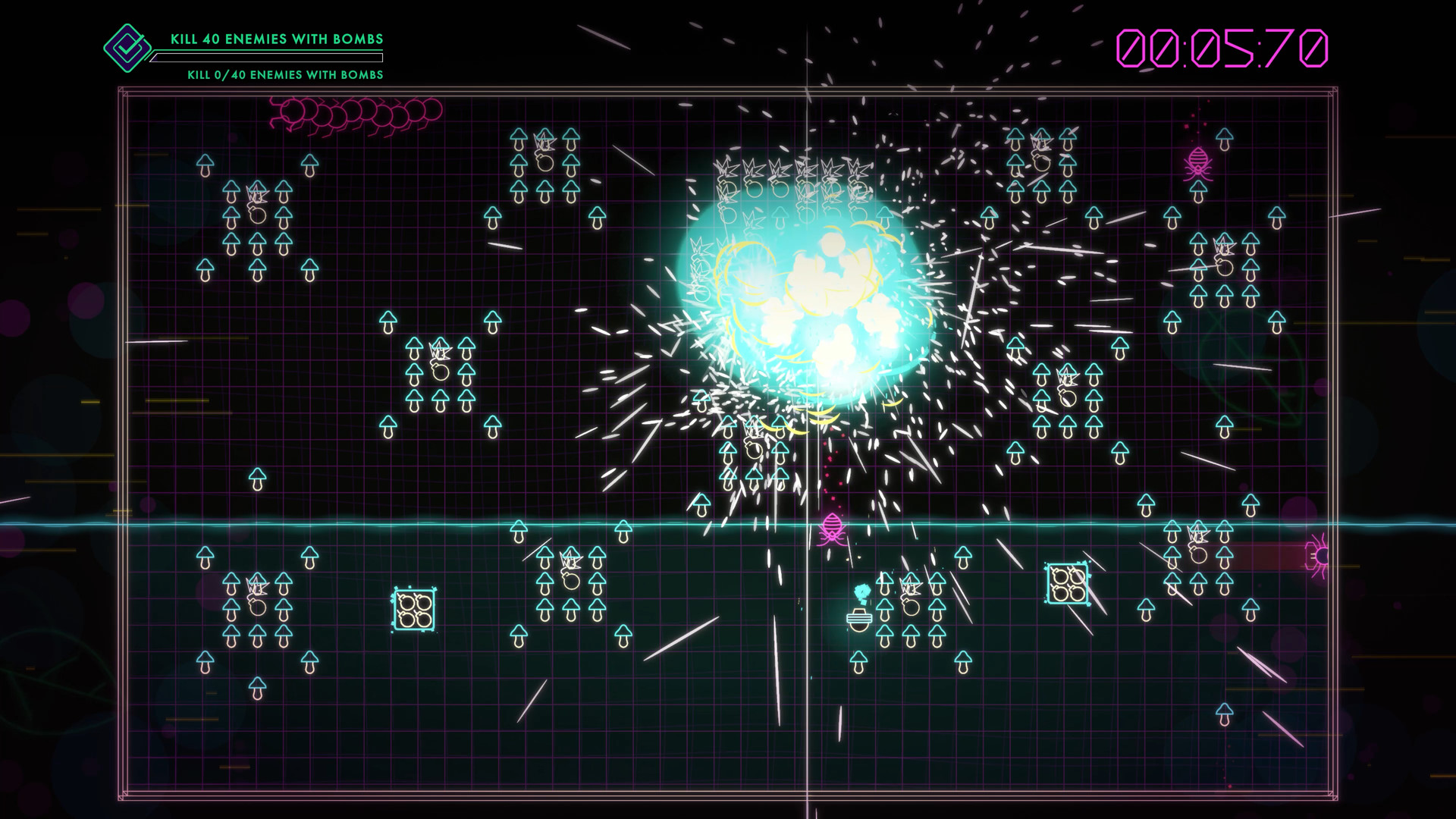 The basic motion of the spider is that it comes in on either side of the screen in the player’s area of control, but unlike the original spider this version moves more slowly and less chaotically.  The spider’s job is to provide a power-up when shot, and this is one of the major changes setting Centipede: Recharged apart from the original.  Powerups come in a variety of forms, with multiple types of spread shot, explosive bullets, rail gun, an orbiting bullet shield, etc.  They also last a good while on the screen before disappearing and provide effects of varying length, but in general it’s not too hard to switch to a new powerup before the old one expires.  The one disclaimer is that, in classic Centipede fashion, you can usually only fire a single bullet at a time.

One of the defining features of a lot of games of the early arcade era was the player only being able to shoot one bullet at a time, generally in order to keep the poor arcade machine from having to think about too many things at once.  This meant that a lot of the more frantic combat was at close range, because you can shoot a lot of bullets very fast when they’ve got next to no travel-time.  While Centipede: Recharged does have a rapid-fire powerup, the game is mostly designed around the single-shot restriction.  The main upward shot adheres to the one-at-a-time limitation, but any extra shots from a powerup are exempt.  What this means in practice is that you can sit in front of a mushroom and blast away, sticking to the one-shot rule for the middle bullet while a fans of firepower blast off at all angles.  It turns the mushrooms in the player area into a potential upgrade, possibly justifying keeping a couple around despite how they get in the way.  More often, though, the mushrooms in the player field pop up no matter how attentive you are at clearing them off, because the insect swarm is unrelenting. 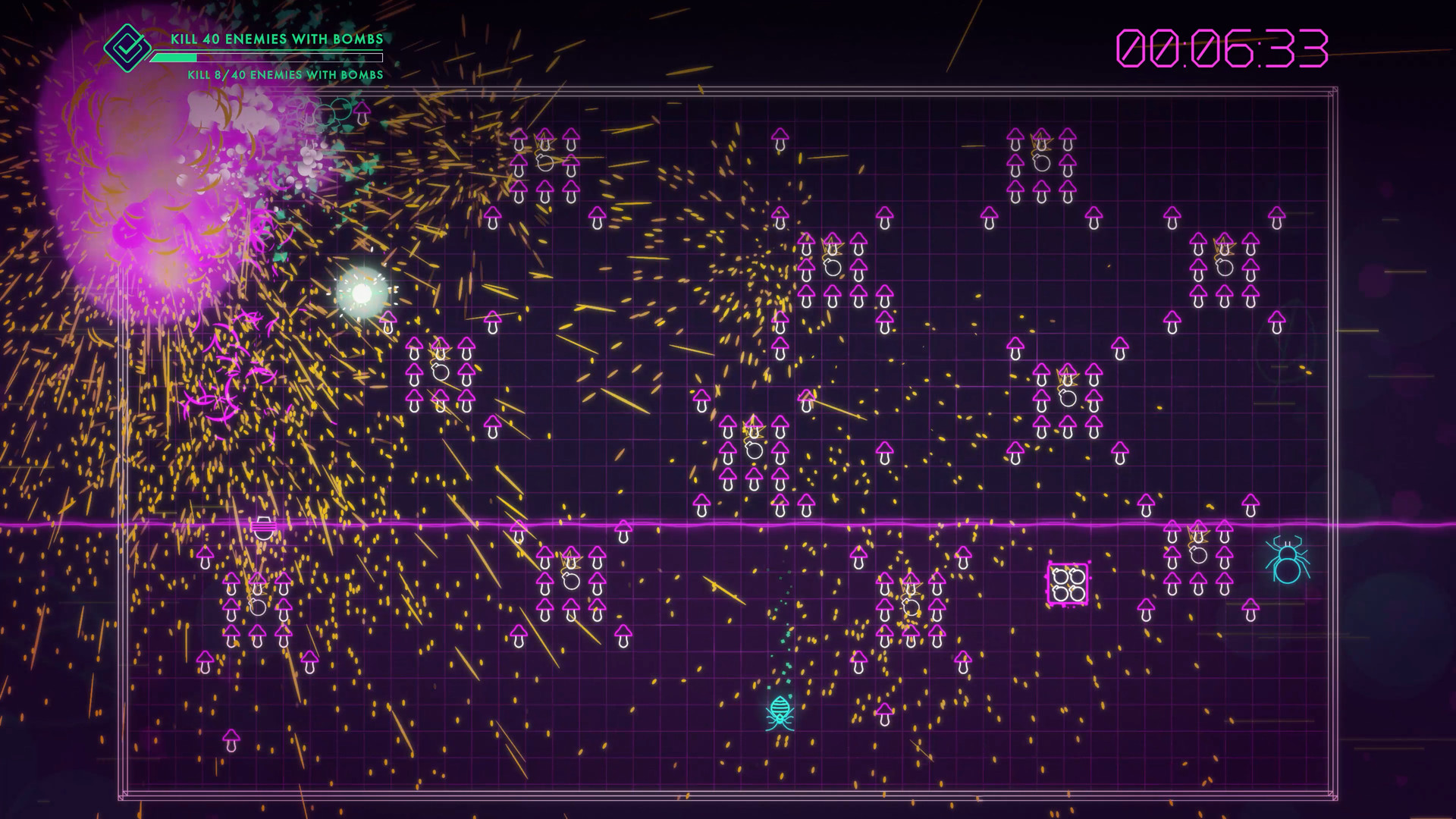 While Centipede: Recharged sticks with just four enemy types, it’s easy not to realize how few that is due to how short each game can be.  The start is appropriately gentle, of course, but with only one life per run it just takes a careless moment to see the Game Over screen bring everything to an end.  The intensity ramps up at a decent pace and even a longer game lasts only a few minutes.  Those last few seconds are spent trying to avoid the centipedes crawling in the playable section of the screen, dodging incoming fleas, and trying to maneuver to the next spider in the hope that it will drop the right powerup to clear out the mushrooms at the very bottom of the playing field.  It’s a frantic scramble for survival, which is exactly how Centipede should be.

In addition to the standard arcade mode, Centipede: Recharged has a secondary Challenge mode that’s a collection of preset levels built around objectives.  It might be a constant flea invasion, dropping down the screen and leaving mushrooms everywhere and especially in the way, challenging you to get a target score.  Or maybe there’s a long centipede and you need to destroy all one hundred pieces of it, or shoot a certain number of scorpions without eliminating any poison mushrooms, or blow up enemies with bombs.  Each level has its own leaderboard, so if you’ve got a favorite there’s something to work towards.  It’s worth noting that the leaderboards are short on functionality, though, not letting you scroll up or down to see what the target is for the top spot.  Even more unexpected is not being able to see the standard mode’s leaderboard except at the end of a game, and once that Game Over hits the game’s score is gone, with no way to see how well you did unless it earned a new leaderboard rank. 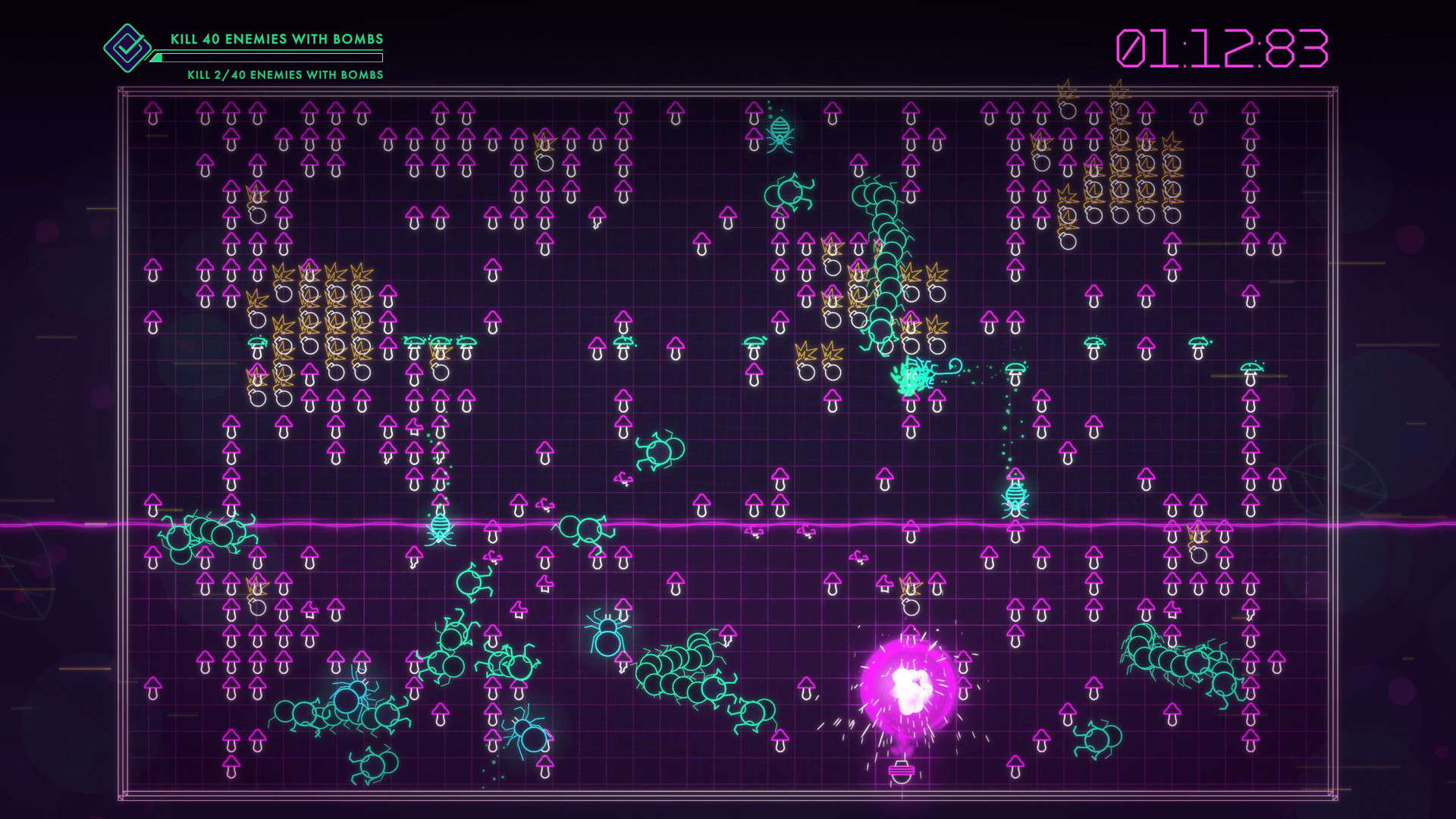 While the leaderboards are wonky the rest of Centipede: Recharged feels just about exactly like you’d want the original game to be when dragged into the current year.  It updates the gameplay flow to be more forgiving than its predecessor but still provides quick, punchy rounds where every second counts.  The Challenge section adds a more focused set of objectives than the free-form arcade mode, and it’s a lot of fun to bounce between the two to blast bugs with wild abandon and then switch over to focus on a specific goal.  While the gameplay itself isn’t particularly deep, it’s not supposed to be, and instead provides straightforward shooting action best enjoyed in small, but highly-satisfying doses.  It’s been forty years since Centipede crawled into arcades, and it’s great to see a new version that’s so faithful to the long-gone shooter classic.