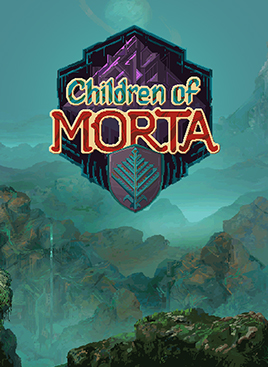 Good things come to those who wait; so often this is the go-to-phrase whenever patience seems all-but-ready to vanish, it’s no surprise that it has as much the potential to tick people off, rather than perhaps comfort them. More than four years have passed since developer Dead Mage initially launched the Kickstarter to their latest project, Children of Morta, and while it has made sure to make the rounds at many a convention, the game’s inevitable release — following a slew of updates, teasers and subsequent expansions to the original scope — has so often felt illusive. Finally we’ve landed at the point where a once Wii U-planned (like so many Kickstarter-backed games circa-2014/2015) title is out, least on PC for the time being, and it goes without saying that the introductory saying is fitting. Its influences, ambitions, ideas and design choices all may resemble many a present-day contemporary, but needless to say Children of Morta is close to striking another fantastic rendering of that roguelike, dungeon-crawling action RPG that last-year hits like Dead Cells excelled so well on.

One needn’t take a single step into Children of Morta‘s core premise of escalating, multi-floor, randomly-generated dungeons, to get a grasp at the sheer amount of effort and detail Dead Mage have place in crafting their world and of the overall presentation. From the detailed pixel-art that adorns [protagonists] the Bergson family’s estate — of which extends beyond to the world of Morta in all its magipunk-like fusing of sci-fi and fantasy leanings — Children of Morta is the kind of game, like Owlboy or Hyper Light Drifter, that you can’t help but stop to take a second-glance at how much is poured into such scenes. Even if the average players may well ignore the pleasantries, never to take notice of the many sprites on-screen — even skip the expository cutscenes that play out in-between dungeon-exploration upon one’s demise on said run — perhaps one of the most impressive, and thus admirable, things about Dead Mage’s approach is in the studio’s smart balancing of player liberty and scripted delivery.

One’s investment and mileage with the story/lore/visuals on display will of course vary depending on how ingrained you are. How (put bluntly) quickly you want to jump back into dungeon-crawling after meeting an untimely, unfortunate or simply amateurish death in the previous run. But the good thing — it wouldn’t even be an exaggeration to mark this down as a great/welcome aspect on top — about Children of Morta is in its lax attitude to how much players invest into the overall narrative and progressing expanding of mechanics. In doing so, it puts the ball firmly back in the player’s court and as a result, the genuine challenge of the dungeons — so far as the variety of enemies involved particularly — is an impactful surprise to be had. And again, regardless of how much you want to invest in the optional lore or added narration upon stumbling across similarly-random NPCs and optional objectives (which vary from clearing a set number of enemies, to puzzle-solving, to protecting a character getting from A-to-B), Children of Morta still makes sure to offer enough of a variety to its combat, as much an incentive to keep at it and level-up the many characters available. 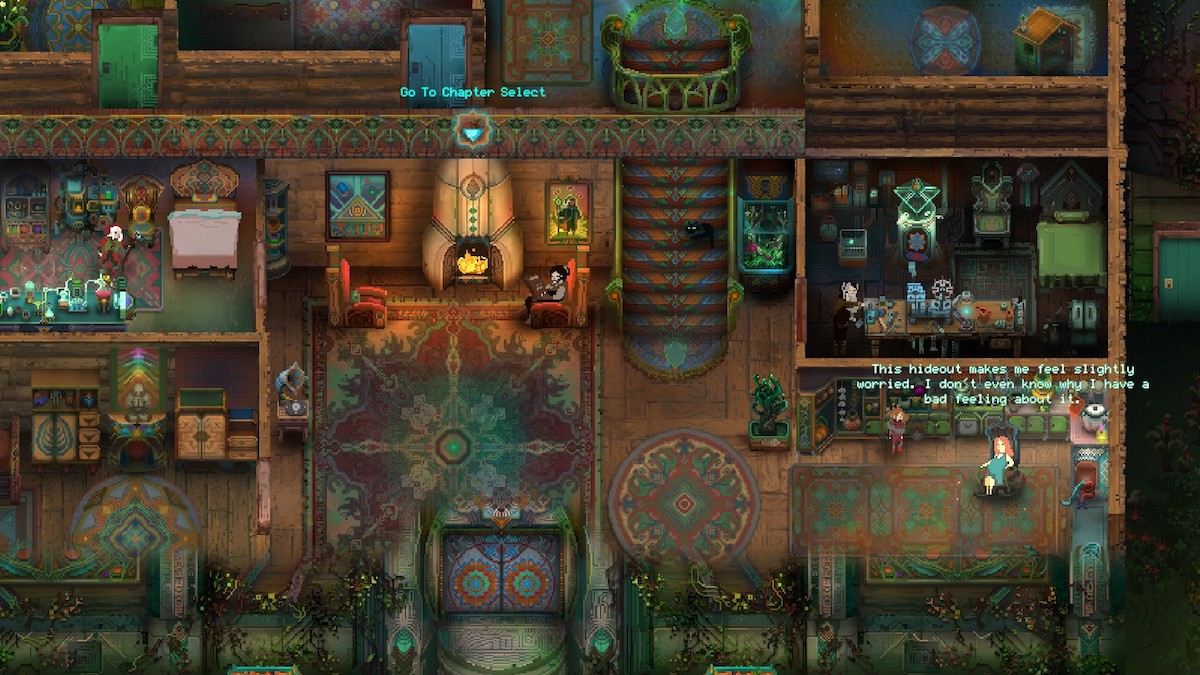 The general rule is that upon selecting a dungeon to tackle — usually three floors long, with an end boss to deal with at the climax — players must select one of the around half-a-dozen strong Bergson family. Each individual aligned with a specific style of fighting, which naturally come with their own pros and cons. For example, one character that prioritizes melee attacks automatically locks-on to the nearest enemy, but as a consequence can only attack facing that given direction. Another character, a mage-type, can only fire projectiles standing still. A third, one more dexterous, starts off attacking at a slow pace but eventually gets increased speed the more they’re actively engaged in fighting. It’s a neat extension to the usual repertoire that is strength:weakness balancing when deciding upon a specific character. But perhaps the more impressive feature on show is how the game promotes the necessity to invest in numerous characters and more importantly to experiment with the many combat styles on display.

Unlike a lot of games of this ilk, character levels in Children of Morta are for the most part shared.  While this of course avoids players having to level-up each character individually, it means you needn’t have to worry about feeling too under-levelled (outside of a small change to total HP) should the need for another’s traits come into play. The game does encourage swapping out characters from time to time through its (a little on-the-nose) health debuff system — a consequence of playing one character for too long, which does eventually wear off after a certain number of dungeon runs. It also finds a way to cleverly portray that “family” motif as well with additional unlockables unique to each character, but yet are shared with the entire family upon acquisition. While most of these may simply be increased odds or slight alterations to stats, given that previously-unlocked attributes can only be upgraded further through increased numbers of unlock points, it’s the dilemma of where one’s resources should go where the real appeal stems from. An RPG system that, more impressively, encourages flexibility without ever coming off like one’s time is being wasted. 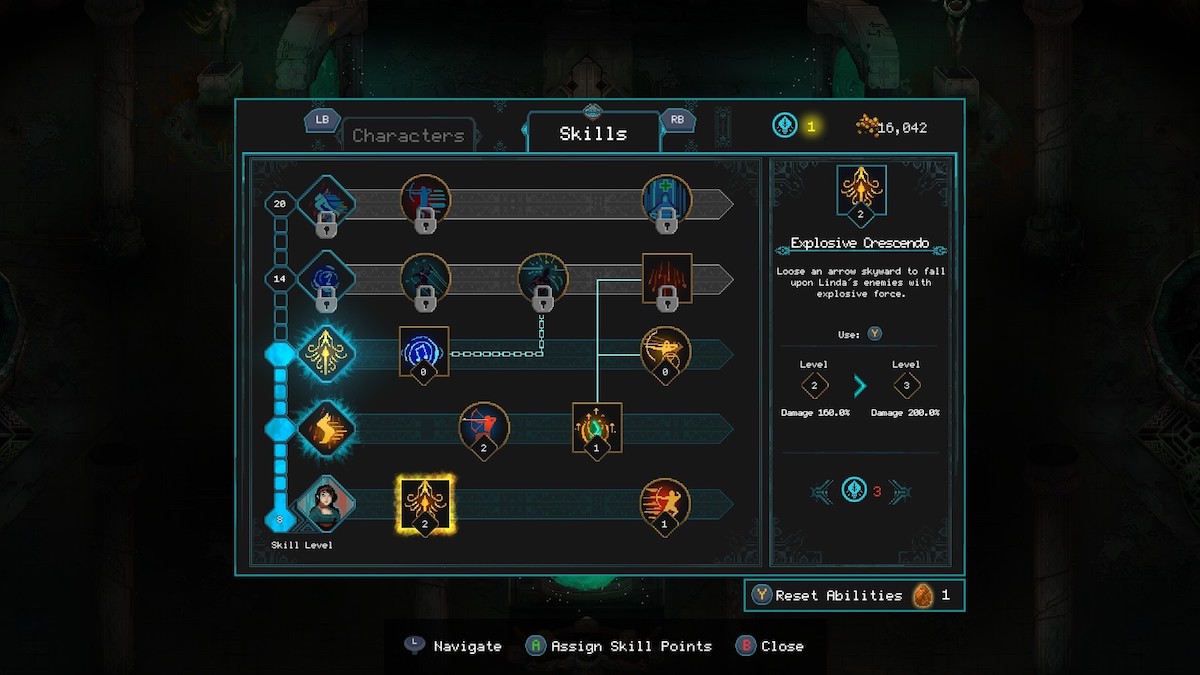 Then of course we get to the actual objective/challenge that is traversing the dungeons and again, Children of Morta orchestrates a brilliant understanding of difficulty via player investment and decision-making. Cliched as it sounds: you get out from one’s run-time what you put into it. Enemies can quickly gang up on you with extreme cases often landing your screen littered with many a variant of foe closing in on your position. The game doesn’t offer any form of respite and the fact health is both scarce and precious means players will constantly be flinging themselves between attack and defense-minded strategy. It’s not simply a case that the best defense is a good offense and it’s this frantic shift between fast, frenzied attacks in the short-term, and more calculated strikes on occasional straddlers in the long-term that makes Children of Morta such an addictive, tempting and frustratingly wonderful rendition of roguelike, dungeon-crawling. Add to this the temptation to explore further in the hope of finding temporary buffs/perks/assist items — some passive and can naturally be stacked, others taking the role of cool-down abilities — and the aforementioned discovering of side objectives and rarely does the game’s seduction of risk:reward slip from out a player’s focus.

All of which means that death has even more of a weight and an impact should you fall in battle and find yourself having to do the whole dungeon all over again. Time spent amounting to nothing, but again, far from feeling wasted or at the very least, not incurring some sense of a lesson learned. Regardless of whether you fell mere moments upon entering or in the closing stages of the accompanying boss battle by the run’s end. Children of Morta offers no respite or charity with this approach, but not for a second does the cruel wiping away of one’s progress (apart from XP and currency) seem unfair or artificially inflated for the sake of overwhelming or working against the player. It’s what makes the elation of finding a [albeit randomly-selected] precious item or “relic” so immensely satisfying and the pain of ignoring the exit up to the next floor in the pursuit of further loot — only to be killed because of one’s curiosity/overconfidence — so horrid to reflect upon in hindsight. Children of Morta doesn’t just fulfill the objective of treating roguelike structure as a means to an end — rather than an end in of itself — it also manages to hit both extremes of the emotional spectrum as a result, sometimes in so small a time. 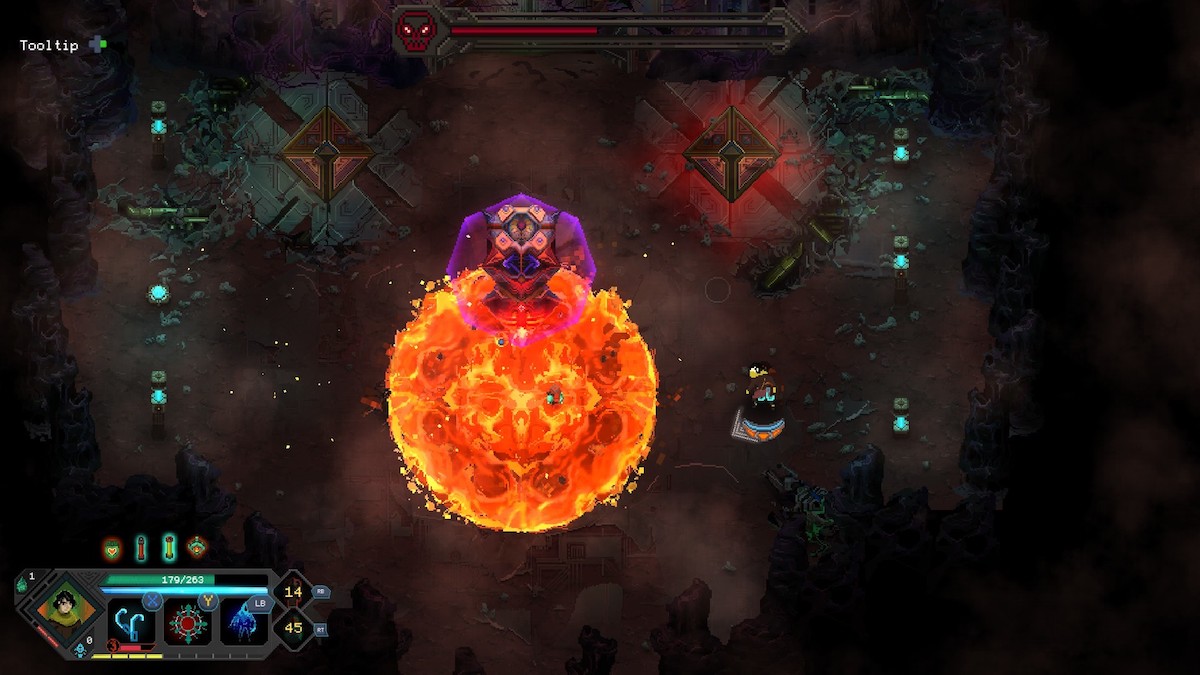 While players may find a pattern or flow eventually as to the way enemies likely spawn, the aforementioned scarcity of health, variance in enemy attacks and uncertainty of whether or not to explore a given floor fully — on the basis of the dungeons themselves — is what makes each and every run an interesting and focused affair. The eventual experience one garners never outweighs the uncertainty laying around every soon-to-be-unveiled, randomly-generated corner. It’s difficult to transcribe into words just how on-point Children of Morta is so far as variety and effort goes, not just with the many pitfalls that lurk in its dungeons, but in drawing you into its pixelated world of mystery and peril on top without beating you over the head with it. Regardless of how much you want to spend or even care about its plot, or its lore or in scouting out each one of its NPCs — though some will offer rewards should they spawn upon your run and you decide to help them — Children of Morta could have succeeded on its gameplay alone. On its well-crafted upgrade system and omnipresent tempting players to detour and detract from the regular path.

As a result it often means that the less-than-celebratory elements, to some may come across mere nitpicks, do in fact add a small crease to what is an otherwise fantastic investing of around fifteen hours in reaching the end credits. For one, some (though not all) boss fights — though throw up genuine challenge if you’re not careful and/or treat a character’s dodge-move as anything but a crucial component to survival — lose some of their edge when they feel less-tailored to ranged attacks and can be dealt with at a reasonably safe distance. An odd oversight on Dead Mage’s part given how well regular enemies mid-dungeon manage to counter such strategies. An annoyance that is more disappointing come the final boss which is surprisingly lackluster and anti-climactic given the scale and context of the narrative up to that point. Another nitpick, though more imperative to note, is the presence of the odd technical slip-up. Namely an instance of clipping through the environment and finding one’s self stuck, unable to progress on — the fact this was the final floor of a dungeon certainly didn’t help. 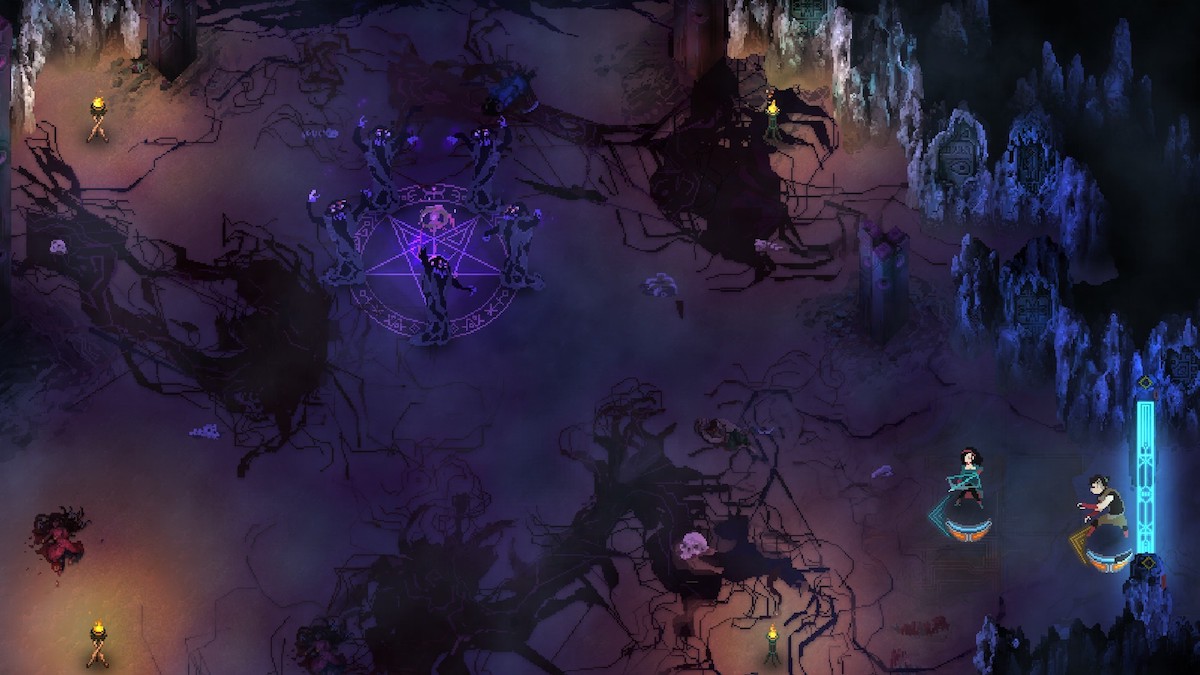 Like Seraph before it, part of the enjoyment with Children of Morta lies not just in cleverly rampaging through wave after wave of foe, but also in the relief of surviving the ordeal through a measured balance of skill and strategy. But with an immense effort put into fleshing out the world underpinning it, the aesthetic that adorns it and the many mechanics that can have players pulled in many a direction — for all the right and justifiable reasons — Dead Mage’s latest is a stellar rendition of the dungeon-crawler. A game that is just as enjoyable when zero attention is afforded to its narrative, as it is watching all its many gorgeous pixel art cutscenes/animations play out in-between dungeon-crawling. While Children of Morta‘s surprising flexibility — without too comprising on the challenge of its gameplay — is one to take note of, it’s Dead Mage’s ability to find harmony with so many [figurative] moving parts that’s more impressive. Don’t let the tag or implication of hollowness throw you, Children of Morta — like Dead Cells before it — is an addictive, well-orchestrated and brilliantly-devised take on the roguelike template.