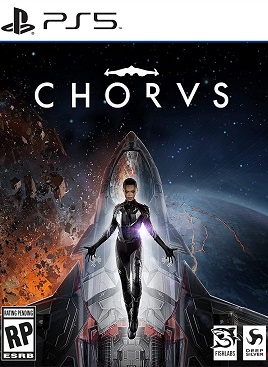 It’s been said before, but there has been a real and surprising dearth of space-based arcade shooters for far too long. It used to be that games like X-Wing and Descent: Freespace ruled the roost. A time where realistic physics were eschewed in favor of blowing stuff up with lasers in a silly sci-fi setting. Few titles have stepped forward to try to fill this space in the last decade or so, with most space games favoring attempts at realism or putting the focus on elements outside of making things go boom. This is why Fishlabs’ title, Chorus, manages to be a breath of fresh air in the vacuum of space. It’s a real stab at creating a classic spacer with modern sensibilities.

As a new title gunning for a spot in the pantheon of space operas, it must be stated that the primary story is a bit dour. Players take the role of Nara, a recovering zealot who used to be a member of the cult known as the Circle. Members of the Circle believe that they’re fighting for a unification of all humanity with the help of a stygian race known as The Faceless. Under the grip of The Great Prophet, their acolytes travel space in order to bring the ultimate message of peace: Join or Die. Nara was considered among the greats of this order, with fantastic Rites (powers) that allowed her to accomplish feats that could not be matched. That all changed when she blew up an inhabited planet. Wracked with guilt, she left the Circle and stowed her sentient ship, Forsaken, and proceeded to make it her mission in life to protect others from the cult.

For a shooty-shooty game such as this, it’s odd to have a protagonist to have such a horrifying motivation. A title with gameplay based around a series of silly fights that are designed to feel “cool” instead of oppressive normally gives the hero a backstory with a tragedy they didn’t intentionally cause, but it works here. As a character, she expresses guilt. It’s displayed in her face during cutscenes, as well as her voice, without delving into self pity. While underlying actions are not relatable, her drive to make amends certainly is. Because of this, her conversations with herself and others, including her ship, have real depth. If nothing else, the story manages to remain interesting throughout. 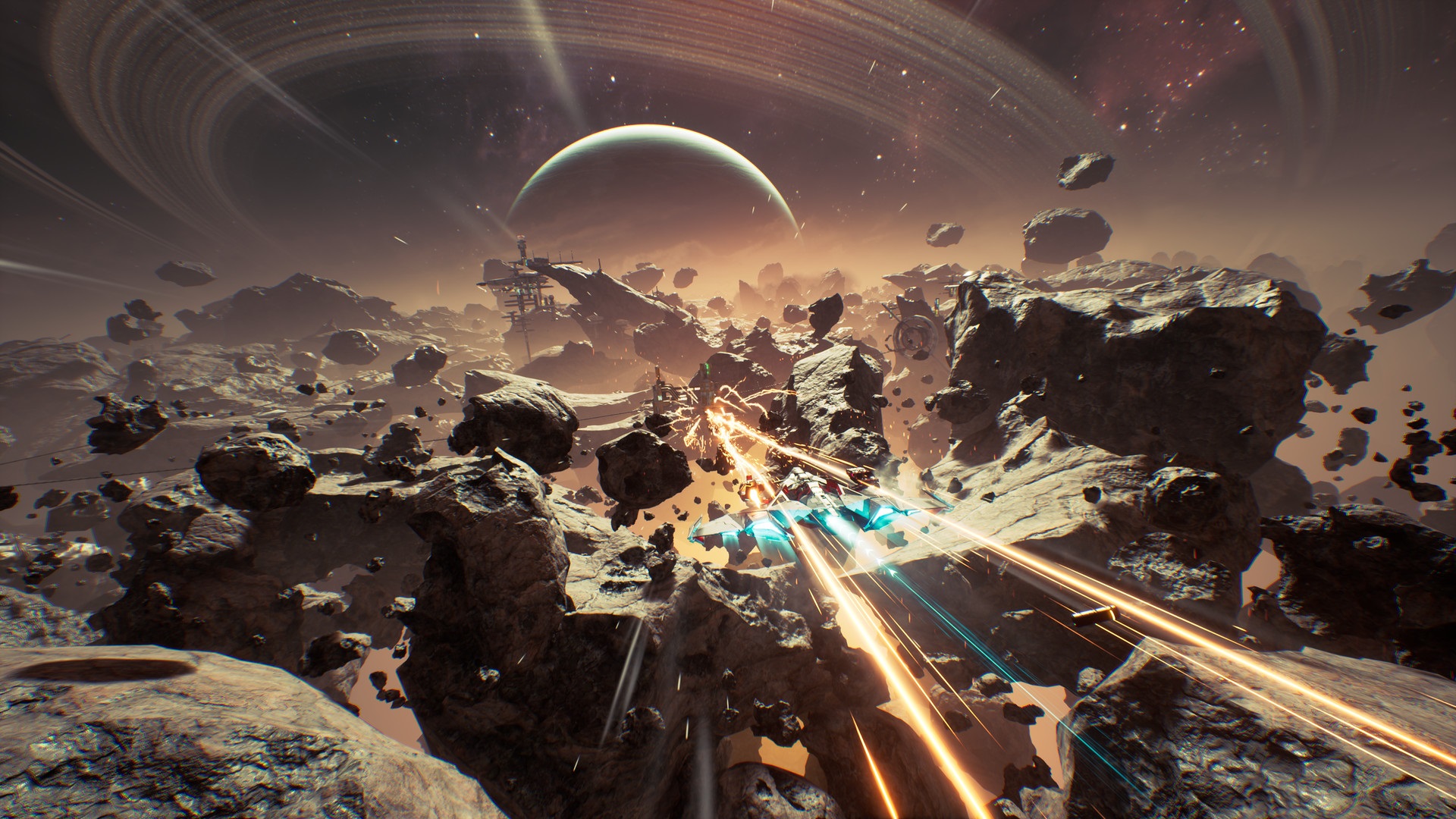 Story means nothing without the gameplay to back it up. Fortunately, Fishlabs nailed this most vital part. Framed as an open world, the game will have players jumping back and forth between areas to take on new quests and hunt for treasure. Each expansive area is littered with fun things to do, such as exploring anomalies, chasing down thieves, defending bases and so on. Chorus walks a tightrope of having a decent variety of things to do while ensuring they’re all thematically appropriate. During play, it always felt like there was something new to stumble on. Sure, it’s possible to mainline the game and not have too hard of a time, but it’s just as likely to pick up a distress signal and being tempted to check it out. Most of the time, the side quest is worth the time and effort. A couple of the race or chase missions can be annoying, but overall it’s just fun to tool around the galaxy picking fights and defending the helpless.

Actually piloting Forsaken is a treat. The ship is responsive with turning and aiming, and the speed is fast enough to limit downtime while not undercutting the expanse of the area that the player is controlling. The ship carries three different armaments. The Gatling guns are great for handling the basic enemies. Lasers are there for cutting through energy shields. Finally, missiles make pounding on heavily armored foes satisfying. Each of these weapons can be upgraded with new versions which can be earned, bought or found. Plus, there are all sorts of modifications to slot in for a variety of different bonuses. It’s normal to take on a challenge and feel that Forsaken is not up to the task. In situations like that, it’s a good idea to move on as there’s likely a new upgrade out there that will make it more manageable. Through my own fault, I didn’t realize that until a couple hours into my playtime with the game and I found myself beating my head against a wall for longer than I should before giving up. Once the flow came into focus for me, the game became much more enjoyable. I had been approaching it as strictly a basic space shooter where all the tools present should be enough. Chorus is much deeper than that. 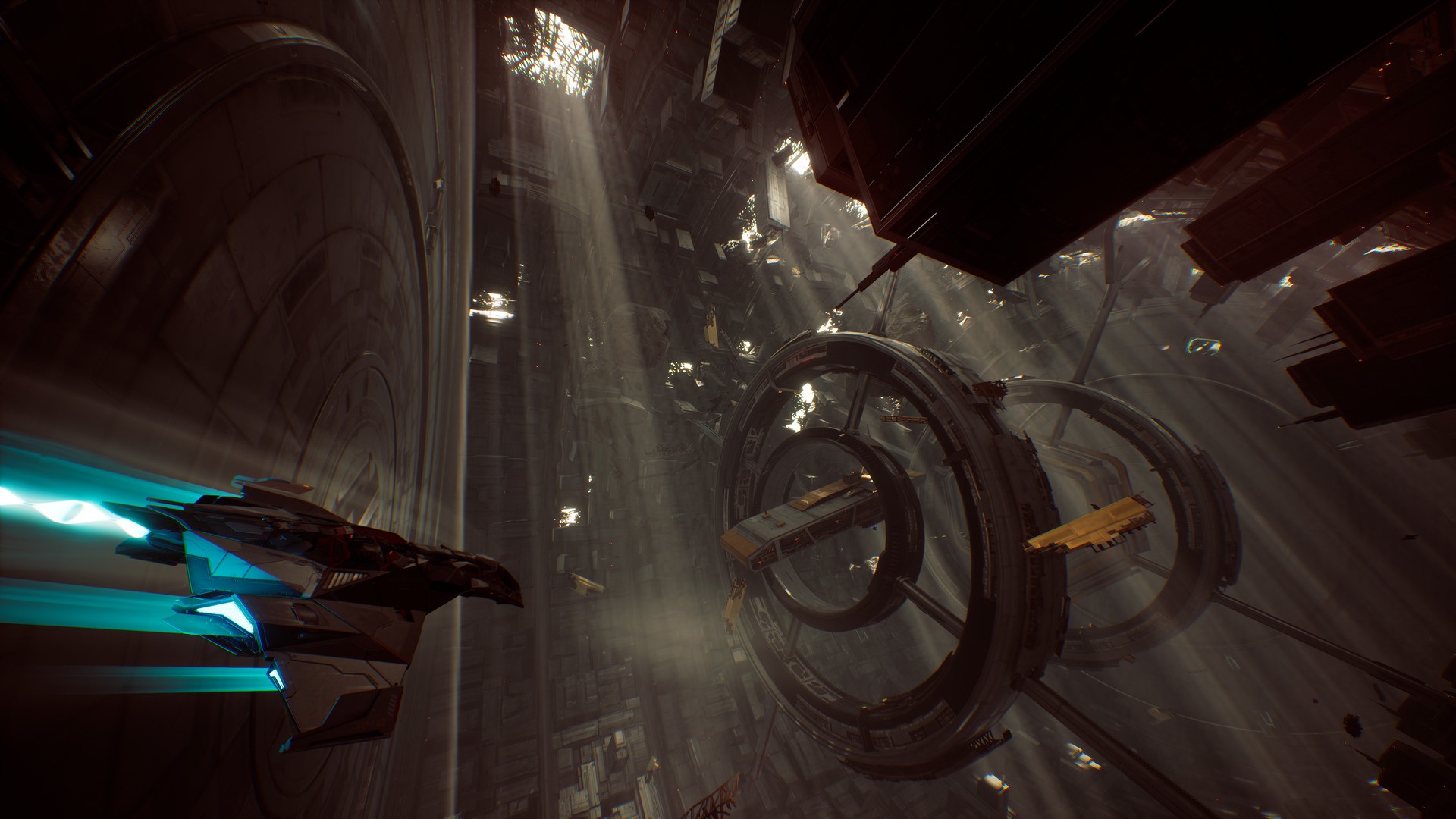 On top of the weapons and upgrades, Nara also gains a variety of Rites to use against the Circle. A personal favorite is the Rite of the Hunt. When properly used, this will warp the player right behind an enemy, cutting down on some of the chase. Combining this with the Drift Trance, which allows the player to fly in one direction while firing in another, gives a feeling of immense power. It’s satisfying to blip behind an enemy, pound them into dust, then scream through the particles of their remains in reverse while stitching up a pursuer in Gatling fire. The action is fast, properly loose and challenging. Another favorite moment is taking on a capital ship, picking apart its defenses, flying inside of it to destroy its core and boosting out before the entire thing explodes.

Much praise can be showered on the art direction. Each area is littered with interesting nooks and crannies to explore, and the details on the areas are sharp. The praise for the graphics does come with some qualifications, though. Chorus is far from an ugly game, but it must be said that it relies on the gorgeous skyboxes to do a lot of the heavy lifting. To better explain why this could be perceived as a flaw, picture a game like Dark Souls. Everything the player sees in the distance is something to eventually approach and explore. Nothing is superfluous. In Chorus, the player will see plenty of cool-looking things in the distance, but they’re always in the distance. For a long time in gaming’s history, this was the norm. These days, though, a pretty skybox with well-designed textures on local objects just doesn’t cut it the way it used to. When thinking about what most of the game has to offer, it’s a lot of space stations and rocks, so kudos to the artists who made it look great. It’s just too bad that much of it is glitter the fails to denote true gold. 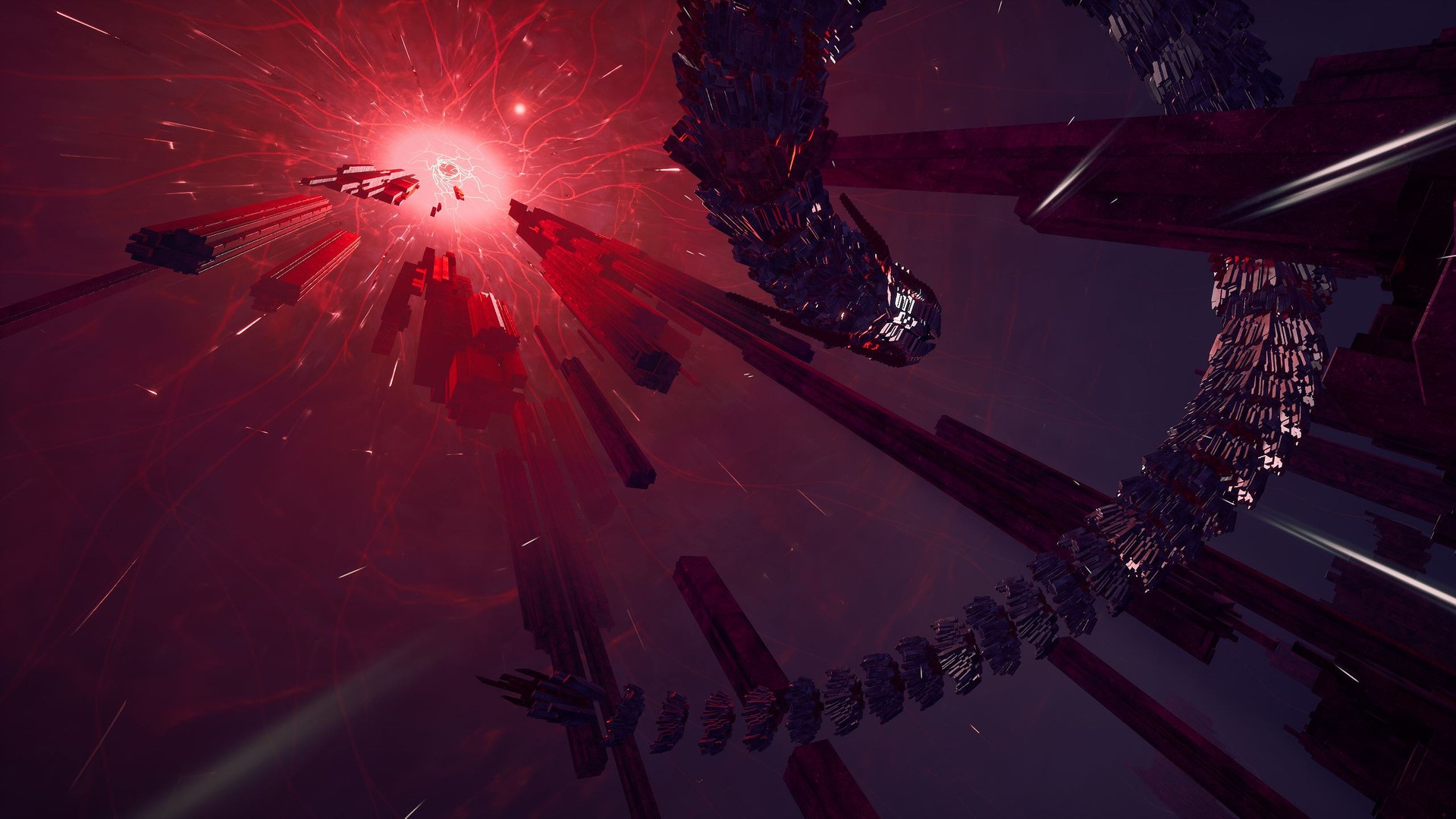 As an operating theory, it seems likely that there was a strict budget that the developers had to contend with. Cutscenes are pretty much Nara in the ship looking sad. When she speaks with other denizens of the universe, the game stops and the player either floats or follows another ship while the story unfolds which is disappointing. Entire story threads are introduced and solved in the same cutscene. As an example, there’s a point where Forsaken…forsakes Nara because he’s still upset about being abandoned by her for a long time. They sit there and talk for a bit, and then he’s suddenly cool with her. It has the feel of a plot element that had some sort of unique gameplay element attached to it but had to be cut. Forsaken’s concern was still valid, so the developers kept the scene in. Things like that, and the aforementioned skybox quibble, lends credence to my budget theory.

Still, for all of these elements, there’s only one real complaint to broach: the checkpointing. It should be fully anticipated that this will be fixed, but there’s a problem with checkpoints being placed right before stretches of exposition. Going into a mission and failing it is frustrating, but there should be a challenge. Restarting from the checkpoint and having to go through the entire set up again before getting another crack at the objective is infuriating. Players put up with this twenty years ago, but this is no longer acceptable in the modern landscape of games. 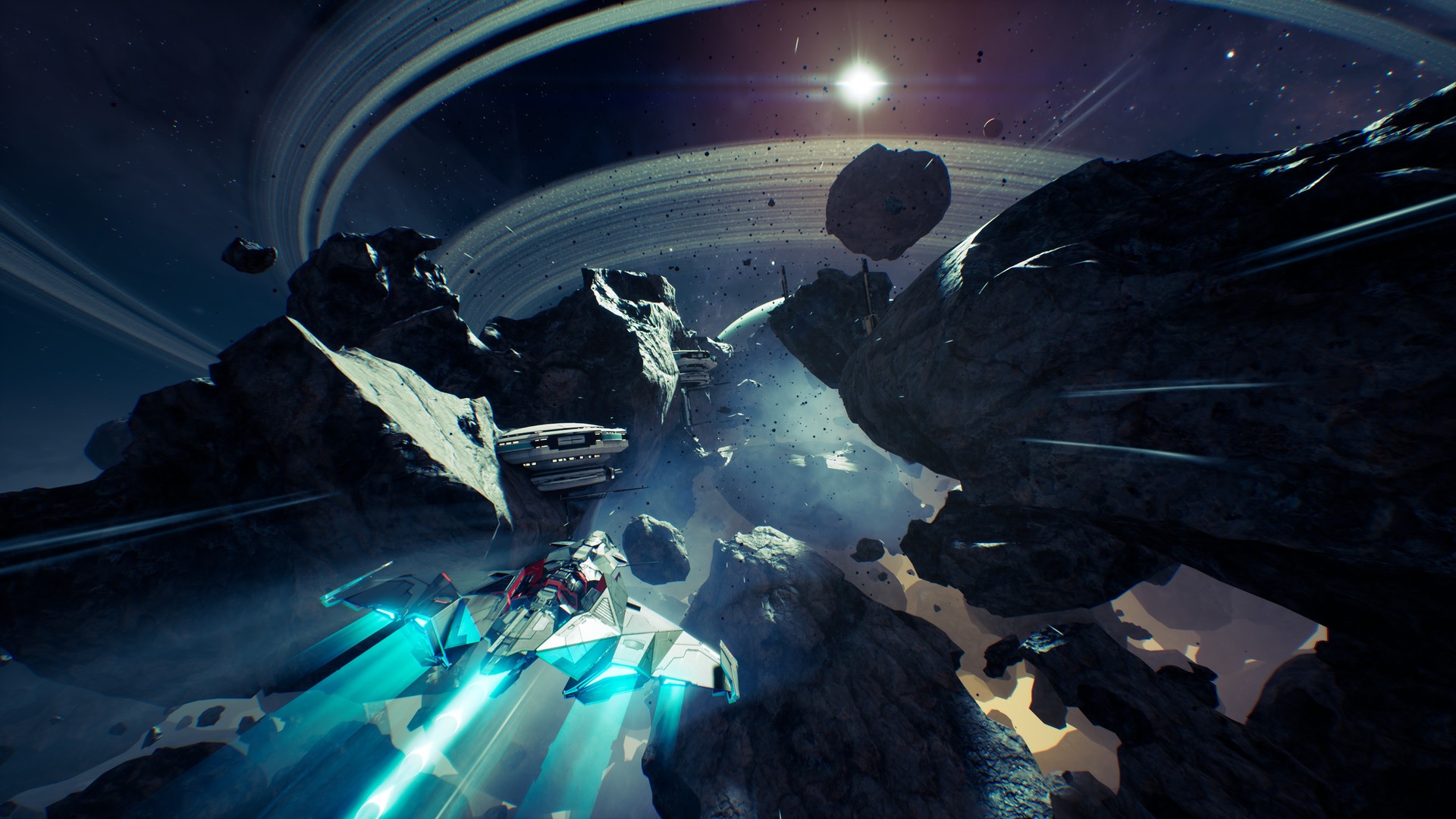 There are valid criticisms to be leveled at Chorus, but most of them stem from improvements in game design across the industry as a whole. Were this released a decade or two ago, it would have received myriad accolades. Anyone starved for an arcade space shooter that doesn’t take place in the Star Wars universe should give Chorus a spin. The protagonist is an interesting mess of a person, the action is varied enough and well tuned., and you’ll feel powerful while still being challenged. Chorus isn’t a perfect game, but a wise person once said to never let perfect be the enemy of good. Chorus is great, especially for the lower launch price, and that’s enough.